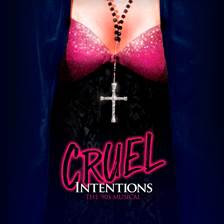 In celebration of the 20th anniversary of the cult classic film Cruel Intentions, producers have announced the casting for the North American tour of the Off-Broadway smash hit CRUEL INTENTIONS: THE ‘90s MUSICAL. Following sold-out runs in Los Angeles and a critically acclaimed, sold-out run in New York City, the new musical will play Broadway In Chicago’s Broadway Playhouse at Water Tower Place (175 E. Chestnut St) for a limited two week engagement April 2 – 14, 2019.

When Sarah Michelle Gellar, the film’s original Kathryn Merteuil, was asked about the news, she said, “Everybody loves me and twenty years later I intend to keep it that way, with the support of the exquisite Cruel Intentions Musical and soundtrack. Not that I need support. I don’t, because I’m fabulous.”

Original film director Roger Kumble adds, “Never in my darkest fantasies would I believe twenty years later, my movie about a pair of hedonistic Manhattan step-siblings would turn into a musical. An amazing musical that even people who hate musicals would love, complete with a soundtrack loaded with the greatest 90s guilty pleasure songs.”

As previously announced, a cast recording featuring the original Off-Broadway company will be released on March 8, 2019 on CD and all digital formats on ABKCO Records.

Grammy-winning producer Stewart Lerman captured the dynamic arrangements from the Off-Broadway production, in his studio outside New York City in August this year. Featuring the stellar talents of Carrie St. Louis, Constantine Rousouli and Alex Boniello alongside Patricia Richardson, the album will contain a collection of lively tracks from CRUEL INTENTIONS: THE ‘90s MUSICAL, including ‘Losing My Religion’ ‘Bye Bye Bye’ and a unique take on ‘No Scrubs’ that is not to be missed. The album is available now for pre-order at www.smarturl.it/cruelmusical. “Breakfast at Tiffany’s,” “Foolish Games,” and “Lovefool” are currently available to stream and as Instant Grat tracks with pre-order now. http://www.smarturl.it/cruelmusical

ABKCO Records will release CRUEL INTENTIONS: THE ‘90s MUSICAL Original Cast Album on CD and digital platforms on March 8. Coinciding almost perfectly with the 20th anniversary of the Roger Kumble film from which it is based, the new Off-Broadway musical uses hit songs from the 1990s as its central motif. Cast members pay tribute to the decade with stellar performances of The Verve’s “Bittersweet Symphony,” Christina Aguilera’s “Genie In a Bottle,” the Cardigans’ “Lovefool” and the lead single “Breakfast at Tiffany’s” originally by Deep Blue Something now available streaming services and as an Instant Grat with pre-order now. http://www.smarturl.it/cruelmusical

Set to the greatest pop and rock hits of the ‘90s, CRUEL INTENTIONS: THE ‘90s MUSICAL is an exhilarating and deceptively funny musical that pulls you into the manipulative world of Manhattan’s most dangerous liaisons: Sebastian Valmont and Kathryn Merteuil. Seduced by revenge and fueled by passion, the two diabolically charming step-siblings place a bet on whether or not Sebastian can deflower their incoming headmaster’s daughter, Annette Hargrove. As the two set out to destroy the innocent girl – and anyone who gets in their way – they find themselves entangled in a web of secrets, temptation, and the cruelest game of all: love. Audience members experience the intoxicating story full of hilarity and heart, set to the greatest throwback hits of the decade by such artists as Goo Goo Dolls, No Doubt, R.E.M., Ace of Base, Jewel, ‘NSYNC and more – in addition to songs from the film's iconic soundtrack such as "Bittersweet Symphony” by The Verve and “Colorblind” by Counting Crows.

CRUEL INTENTIONS: THE ‘90s MUSICAL debuted at The Rockwell Table & Stage in Los Angeles in 2015, where it ran for 38 sold-out performances, before being remounted for a second sold-out run at LA’s Prospect Theatre in November 2016. In February 2017, the musical played a sold-out “pop-up” engagement at (le) Poisson Rouge and returned in November 2017 to play a successful twenty-one-week engagement at the downtown NYC nightspot before its final performance on April 8, 2018.

ABOUT BROADWAY IN CHICAGO
Broadway In Chicago was created in July 2000 and over the past 19 years has grown to be one of the largest commercial touring homes in the country.  A Nederlander Presentation, Broadway In Chicago lights up the Chicago Theater District entertaining more than 1.7 million people annually in five theatres. Broadway In Chicago presents a full range of entertainment, including musicals and plays, on the stages of five of the finest theatres in Chicago’s Loop including the Cadillac Palace Theatre, CIBC Theatre, James M. Nederlander Theatre, and just off the Magnificent Mile, the Broadway Playhouse at Water Tower Place and presenting Broadway shows at the Auditorium Theatre.

Broadway In Chicago proudly celebrates 2019 as the Year of Chicago Theatre.

Dara Orland (Mrs. Bunny Caldwell) Regional credits include Babette/Dance Capt. (Beauty and the Beast), Mayzie Le Bird (Seussical), Graziella (West Side Story), The Little Mermaid (Disenchanted), Tina (Sister Act), Ensemble u/s Ms. Fleming and Dance Captain (Heathers: The Musical). She most recently appeared in the National Tour of Cirque Dreams Holidaze as the Angel. Dara holds a BFA in Drama from NYU’s Tisch School of the Arts. Her choreography has been featured Regionally, Off-Broadway, and Internationally at the National Theatre of Abu Dhabi.

Taylor Pearlstein (Kathryn Merteuil) Recent credits: Flashdance (Gateway), and as Hodel in Fiddler (Arizona Theatre Company). Taylor performs her music around NYC, and her debut album, When the Birds Wake You Up is available on all streaming platforms. She is a BFA graduate from the University of Arizona.

Posted by Bonnie Kenaz-Mara at 6:00 PM No comments: