OPENING: Return of the Chicago Premiere of HUNDRED DAYS November 7, 2021 – January 9, 2022 at The Chopin Theatre

Kokandy Productions Presents the Return of the Chicago Premiere of

Music & Lyrics by The Bengsons

Book by The Bengsons & Sarah Gancher

HUNDRED DAYS was first presented by Kokandy Productions in March 2020. Due to the pandemic, the original run was shut down on opening night. The original cast (featured in the above photo) included Abigail Cline, Chris Farrell Jr., Lucas "Looch" Johnson, Royen Kent, Emilie Modaff and Melanie Vitaterna.

Kokandy Productions is proud to present the Chicago premiere of the bold new musical Hundred Days, featuring music and lyrics by The Bengsons, and book by The Bengsons and Sarah Gancher. After the pandemic forced the original Kokandy run to close on opening night, Hundred Days returns to make its Chicago debut, having enjoyed successful runs at La Jolla Playhouse and New York Theatre Workshop, Hundred Days will be helmed by director Lucky Stiff with music direction by Matthew Muñiz and choreography by Collin Quinn Rice. Hundred Days will playNovember 7, 2021 – January 9, 2022 at The Chopin Theatre, 1543 W. Division St. in Chicago. Tickets are currently available at www.kokandyproductions.com, or in person at The Chopin Theatre box office. The press opening is Monday, November 15 at 8 pm.

Please note: Kokandy Productions will require proof of vaccination and masking at all performance.

The cast is led by Emilie Modaff as Abigail Bengson with Royen Kent and Alec Phan alternating in the role of Shaun Bengson, with Grace Bobber, David Gordon-Johnson, Lucas “Looch” Johnson, Brennan Urbi and Melanie Vitaterna.

Hundred Days is an uncensored, exhilarating and heartrending true story about embracing uncertainty, taking a leap and loving as if you only had 100 days to live. With magnetic chemistry and anthemic folk-punk music, creators Abigail and Shaun Bengson explore a fundamental question: how do we make the most of the time that we have?

A New York Times Critics’ Pick, Hundred Days was hailed as “a luminous musical memoir that celebrates and laments the elusive radiance of a shared life.” New York Magazine called the show “a series of ecstatic songs that make the case for living and loving. Hundred Days shines a light in the darkness. There’s something about that way of moving through the world – chest up, heart open, irony pushed firmly aside – that feels downright daring right now.”

Comments Producing Artistic Director Derek Van Barham, “Hundred Days is a celebration of life. The communal, ritualistic aspects of the show will invite us all to come together, to rejoin the living, and to be human again. It’s an invitation, a celebration, a well-earned reunion – closing the circle on a very trying time. The energy, the humor, the love and the care innate in the show are what I want to share with our audience.” 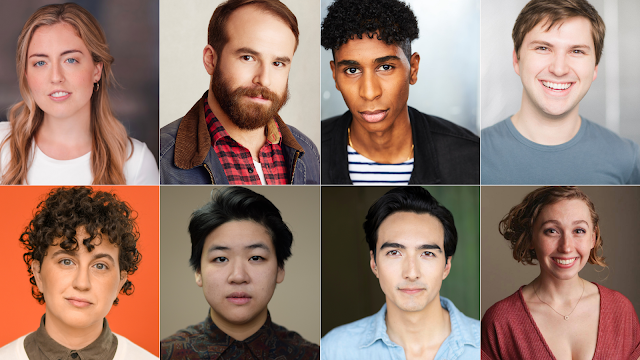 Tickets: Previews $25. Regular run $38. Students/senior $30. There will be a limited number of $15 tickets available for students and artists for each performance. Tickets are currently available at www.kokandyproductions.com, or in person at the Chopin Theatre box office.

The Bengsons (Book, Music, and Lyrics) have appeared at such venues as Joe’s Pub (NYC), MASS MoCA (North Adams, MA) and the Market Theater (Johannesburg, South Africa). Their music has been featured onSo You Think You Can Dance (FOX) and in The Lucky Ones (Ars Nova); Anything that Gives Off Light (National Theatre of Scotland/The Team); Sundown, Yellow Moon (Ars Nova/WP); Hurricane Diane(NYTW/WP, Two River Theatre); you’ll still call me by name (New York Live Arts, Jacob’s Pillow) andIphigenia in Aulis (Classic Stage Company). They have been nominated for the Drama Desk, Drama League and Lucille Lortel Awards. Abigail Nessen Bengson has toured as a member of tUnE-yArDs, including an appearance on Late Night with Jimmy Fallon.

Lucky Stiff (Director) is a director and performer working in Chicago and New York. They build original experiences that often combine nightclub culture with performance art as well as classic stories, and their work takes inspiration from Weimar, Germany, Pierrot clowns and golden age musicals. They have been featured at Steppenwolf Theatre Company, the Museum of Contemporary Art Chicago, School of the Art Institute of Chicago, Disco Dining Club (Los Angeles), Boy Friday Dance Company and Bushwig Festival of Drag, among many others. They are a co-producer of the monthly shows GODDESS at Berlin Nightclub and Delirium: A Bohemian CabaRave at The Newport Theater, and they are a cohost of The Tea Podcast. They hold an MFA in Directing for Theater from Northwestern University.

Matthew Muñiz (Music Director) is a pianist, composer, songwriter and teacher. He's a company member with The House Theatre of Chicago, where his music direction and performance credits include The Nutcracker (2010-2018), Verböten (2020), United Flight 232 (2016), The Great and Terrible Wizard of Oz (2017) and Hatfield & McCoy (2018). As a composer, he most recently created music for The House Theatre’s production of Pinocchio (2019). His work has appeared in two short films and in one feature-length zombie horror flick, and in plays and podcasts. In 2013, he produced and released a full-length album of his songs with his band, The Live Debate! (available on all streaming services). His music can be heard in The Last Defender, an Escape created with Cards Against Humanity, and in the upcoming Escape, Nova to Lodestar. When Matthew isn’t making music, he’s probably making (or playing) games himself.www.matthewmunizmusic.com

Collin Quinn Rice (Choreographer) is a queer actor, dancer and multi-media artist based in Chicago. Recent movement credits include The Hilary Duff Project (2017 & 2020); The Dog, The Night, and The Knife; Disco Pigs (Silencio); and Big Love (Wirtz Center for the Performing Arts). They were most recently seen as an actor in The Tasters (Rivendell), All Quiet on the Western Front (Red Tape Theatre), Mike Pence Sex Dream (First Floor Theater), The Harvest (Griffin Theatre Co.), Hatfield & McCoy (The House), Le Switch (About Face Theatre), Masque Macabre (Strawdog Theatre Company), Going to a Place… (Redtwist Theatre) and The Ode at Pint's End (Birch House Immersive). Film credits include The Right Swipe and The Play Cycle. Collin is a graduate of Northwestern University, and they are represented by Big Mouth Talent. Collin also moonlights as a headshot photographer – their comprehensive work can be found at www.collinquinnrice.com.

Posted by Bonnie Kenaz-Mara at 3:32 PM No comments: