Magic Slim was a favorite of ours here at ChiIL Live Shows.   He was an annual staple at the Chicago Blues Fest and will be missed. Magic Slim, a revered and towering figure in the field of traditional Chicago blues, died February 21st in a Philadelphia hospital at the age of 75. Born Morris Holt in Torrance, Mississippi in 1937, the guitarist performer, bandleader, and recording artist went on to enjoy a career that launched him to national and international recognition and acclaim.

Slim was one of the foremost practitioners of the raw, gut-bucket, back alley blues associated with the postwar Chicago blues sound. He and his band, the Teardrops, were known as "the last real Chicago blues band" for their authentic, no-frills, straight-no-chaser performance of the music.

Slim's slash and burn guitar technique and booming vocals made for a commanding stage presence. His intense style was the blueprint that spawned much of the music played by modern blues artists and rockers.  After catching one of Slim's electrifying live shows at a local nightclub Eddie Vetter invited Slim to open Pearl Jam's concert in Chicago.  Magic Slim also had an encyclopedic repertoire of hundreds of blues songs in his head, giving his live shows a charming impromptu quality.

Growing up in Grenada, Mississippi, Slim took an early interest in music, singing in the church choir, and fashioning a guitar for himself with baling wire from a broom, which he nailed to the wall. "Mama whooped me for that," recalled Slim. His first love was the piano, but having lost the little finger on his right hand in a cotton gin accident, he found it difficult to play properly. Undaunted, he simply switched to guitar, working in the cotton fields during the week and playing the blues at house parties on weekends.  In 2011 the state of Mississippi erected a Blues Trail Marker in Slim's honor in front of a building in Grenada where his mother operated a restaurant.

In 1955, like many musicians from the Deep South, Slim migrated to Chicago, where he was mentored by his friend Magic Sam, who gave the lanky Morris his lifelong stage moniker.  Initially discouraged by the highly competitive local music scene, Slim went back to Mississippi and spent the next five years woodshedding and perfecting his craft.  He confidently returned to Chicago and became a formidable player on the scene, eventually putting together the Teardrops, who would become one of the busiest and best-loved blues bands around, and one of the most sought-after headliners for festivals in Europe, Japan, and South America.  Slim and his group won the coveted Blues Music Award in 2003 as "Blues Band of the Year," one of six times Slim won a BMA, considered the highest honor in the blues.  Living Blues magazine called Slim and the Teardrops "a national treasure."

Slim's recording career began with a series of singles in 1966, and he recorded his first album for a French label in 1977.  With the release of Gravel Road in 1990, he began a twenty-two year association with Blind Pig Records, who issued ten albums and a live DVD over that span.  His last release, 2012's Bay Boy, proved that Slim could still deliver the goods. As No Depression said, "Magic Slim doesn't just play the blues, he body slams his audiences with a vicious guitar attack that pins them to the floor. His blues are the in-your-face variety."  AllMusicGuide added, "Magic Slim turned 75 in 2012, but his growling vocals have the fire and brimstone of a Young Lion and his guitar playing is still as razor-sharp as it was when he turned pro in the '50s."   Blind Pig Records owner Jerry Del Giudice said, "Magic Slim embodied the heart and soul of this label.  It was Magic Slim, and the guys like him, and their music, that inspired us to start the label in the first place."

Blues Revue once remarked, "Whoever the house band in blues heaven may be, even money says they're wearing out Magic Slim albums trying to get that Teardrops sound down cold." Now Slim can assume his rightful place as the leader of that band.
For a complete biography, please click HERE. 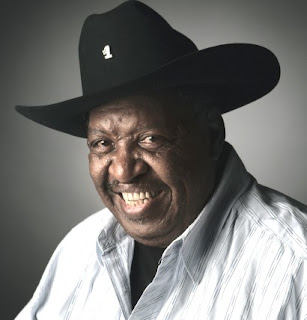 Posted by Bonnie Kenaz-Mara at 11:09 AM No comments: