Known for powerful and passionate live performances, Tamar Braxton will bring her dynamic and unforgettable show to audiences across North America this spring and summer. 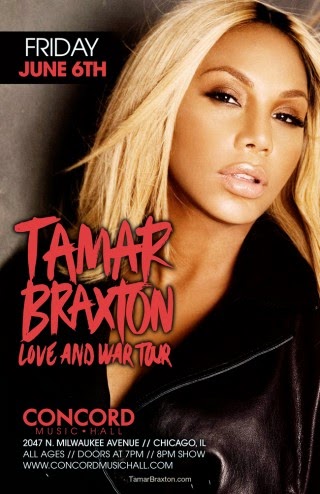 The Grammy Award-nominated singer, songwriter, personality, and television producer is set to be direct support for R&B legend R. Kelly on his upcoming arena jaunt followed by a headline run of her own.

Expect to hear and see her Streamline/Epic debut, Love and War, come to life vividly and vibrantly on stage nightly. Her instantly recognizable voice always captivates, while her presence remains invigorating. Idolator has called her live show, "very impressive", while Perez Hilton claims, "her vocals are ON POINT". You'll definitely feel Love and War stage when she rolls through your town.

Right now, Tamar is also compiling ideas for her forthcoming release and preparing for the nationwide launch of The Real— the syndicated, one-hour daily talk show set to launch nationwide in Fall 2014 on Fox Television Stations and premiering in a second window on BET. Viewers can also catch her on the  hit series Tamar & Vince and Braxton Family Values.

In just the past year, Tamar has solidified herself as one of R&B’s leading divas. Love and War became the #1 R&B album upon debut, selling 400,000 copies since its September release. In support of the record, she performed to packed houses across the U.S. on a 30-city tour supporting John Legend, engaged in a whirlwind European promo run, and even picked up two 2013 Soul Train Awards, after performing at the event in Las Vegas. She also released her very first holiday album, Winter Loversland. On top of it all, she gave birth to her first son, feeling like as she puts it, “I won!”

Love and War hit #2 on the Billboard Top 200 upon release, making for 2013's highest debut from a female R&B artist. Meanwhile, it also topped the Billboard Top R&B Albums Chart and iTunes Top R&B Albums Chart. Press acclaim also showered the release. Vibe described the record as "Emotional and amazing", while ARTISTdirect.com called it "everything a classic R&B record should be and so much more". After gracing the cover of Ebony Magazine, she celebrated the album's release with performances on Good Morning America, Live With Kelly & Michael, and Late Night With Jimmy Fallon.
Posted by Bonnie Kenaz-Mara at 2:14 PM No comments: