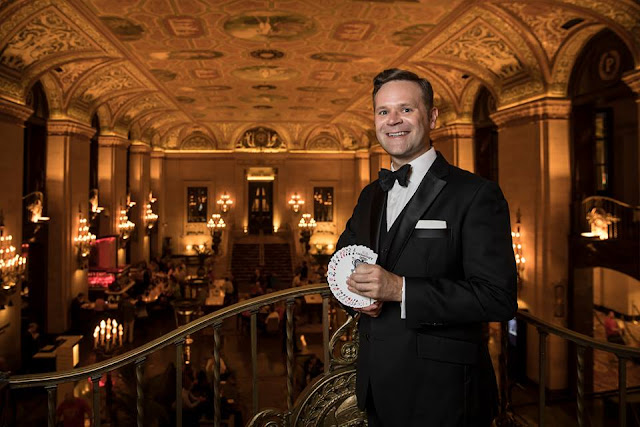 I've caught The Magic Parlour every few years, since it's early days in the eclectic basement digs of Chopin Theatre. Back in 2012 I had the great pleasure of interviewing mystifying magician, Dennis Watkins, in his home. Check it out here:


Since then, Watkins has moved up in the world, out of the cellar and into the elegant Palmer House Hilton Hotel! The Magic Parlour is a top pick of ours for tourists and locals alike. Watkins is charismatic, charming, and utterly baffling, while remaining refreshingly free of ego. The Magic Parlour show and Potter's Palmer House local are classic Chicago and truly a treat. 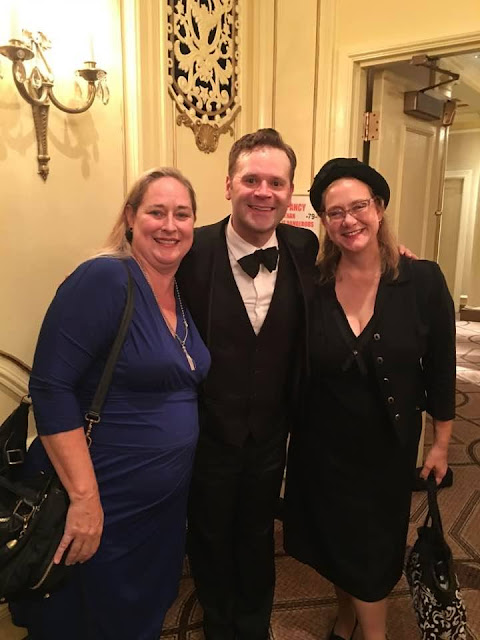 Over the past eight years, my husband, kids, and friends have joined me at various Magic Parlour performances, and all have been amazed and well entertained by Dennis Watkins' close magic. Watkins remains one of our favorite premiere prestidigitators. We're excited to celebrate his 1,000th performance this month, as star in the longest currently running magic show in Chicago. Highly recommended! 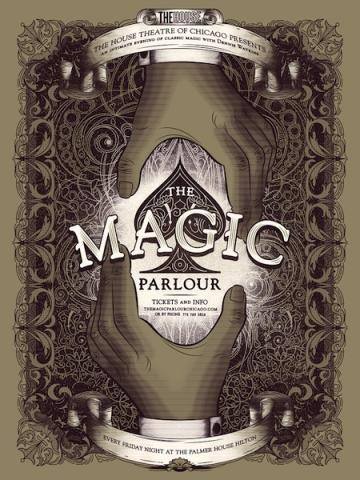 Dennis Watkins, a renowned third-generation magician and mentalist, has baffled and bemused audiences with his performance of The Magic Parlour. Produced by The House Theatre of Chicago, Watkins reaches a milestone on January 25 when he presents his 1,000th performance in the longest currently running magic show in Chicago. Each week, intimate audiences of just 44 guests are treated to 90 minutes of tom-foolery through close-up magic and mystifying mentalism at the storied Palmer House, a Hilton Hotel, 17 E. Monroe. The 1,000th show will be performed Friday, Jan. 25 at 9:30 p.m. While seating is limited for this milestone performance, the open run show continues in its season of five shows weekly thereafter. To find more about Watkins and The Magic Parlour, visit TheMagicParlourChicago.com.

“When we conjured up The Magic Parlour, it was a once-weekly late-night show in Wicker Park. Finding our home at the Palmer House on New Year’s Eve 2011 helped us evolve this project into the sophisticated production it is today. The audience’s imagination is at the heart of a truly magical and personal experience,” says Watkins.

The Palmer House has a rich history filled with hosting nearly a century’s worth of legendary magic performers including Chicago native and world-renowned magician Harry Blackstone, Sr., Paul Rosini, Richard Cardini, Ching Ling Fu and others. Watkins’ unsurpassed milestone at the historic venue is a testament to his ability to meld the best of magic’s captivating draw with a modern show, keeping the allure of Chicago’s deep-rooted magic scene alive for locals and visitors alike.

Available for only The Magic Parlour ticket holders, guests can toast the occasion with a magical cocktail and a special prix-fixe Magic Menu dinner at Lockwood Restaurant & Bar at Palmer House throughout February.

I can attest, their food is fantastic! 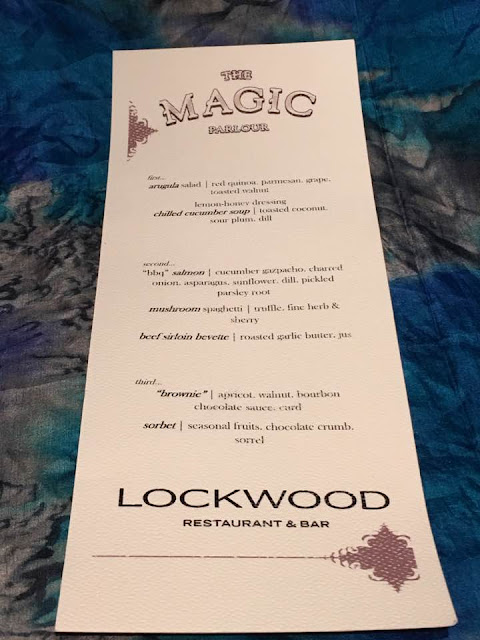 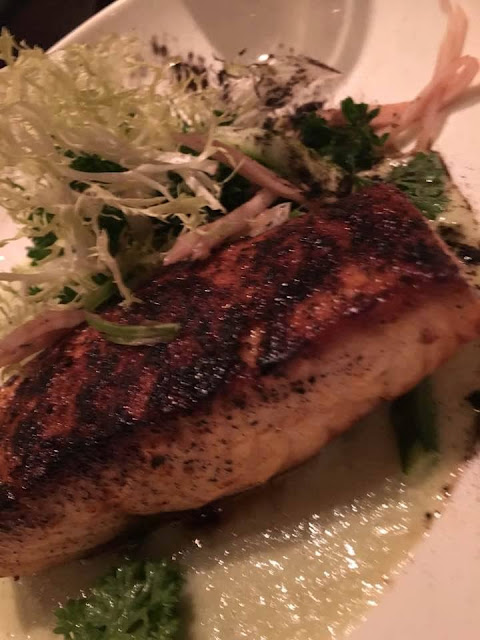 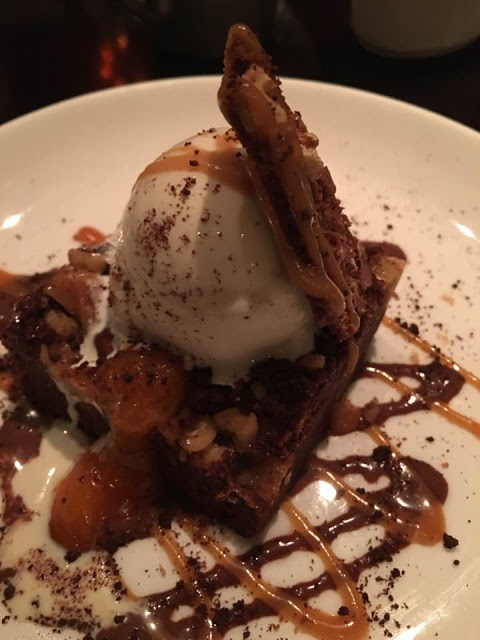 “I keep the show fresh by adding new material throughout each year, always diving deeper into the lessons about inspiring wonder my grandad imparted to me.  With both believers and skeptics participating, every show is a one-of-a-kind happening,” explains Watkins. 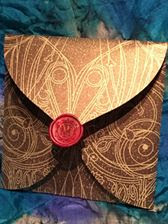 The Magic Parlour is an upscale event and cocktail attire is encouraged. The show is open to guests ages 12 and older. Tickets for The Magic Parlour are $79 or $89 each, which includes wine, beer and soft drinks served during the performance. The prix-fixe Magic Menu at Lockwood Restaurant & Bar costs $41 per person, all inclusive, and dinner reservations can be reserved at the time of ticketing.

Purchase tickets at www.themagicparlourchicago.com or by calling The House Theatre of Chicago Box Office at 773-769-3832. 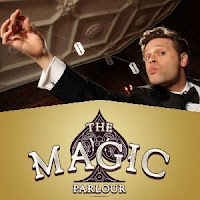 ABOUT MAGICIAN DENNIS WATKINS
Dennis Watkins is a third-generation magician who travels the country bringing world-class magic to the world's largest companies, as well as exclusive private and society events.

Watkins' critically-acclaimed one-man-show, The Magic Parlour, has been running at the Palmer House Hilton Hotel in downtown Chicago for seven years. Produced by The House Theatre of Chicago, The Magic Parlour is an intimate evening of classic magic and impossible mind-reading in a private suite at one of Chicago's most historic and noteworthy hotels.

As a Company Member with The House Theatre of Chicago, Watkins has written, acted, and directed and performed in over 21 world-premiere productions. He appears as one of America’s greatest magicians in The House’s production of Death & Harry Houdini, including a death-defying nightly performance of the Water Torture Cell. Houdini has played seven times in Chicago over The House’s 17-year history. With awards and honors from the Texas Association of Magicians, the Society of American Magicians, the International Brotherhood of Magicians, and the Desert Magic Seminar, Dennis specializes in creating unforgettable magical experiences for each and every one of his audiences. The Chicago-based magician was honored to be an invited guest on Penn & Teller’s Fool Us television show.

ABOUT THE MAGIC PARLOUR
The Magic Parlour starring Dennis Watkins is an intimate evening of classic magic and mind-reading featuring the work of the third-generation magician. Guests to this intimate, magic-packed evening gather at Potter's in the Palmer House lobby before Watkins personally escorts them to the performance space. Once inside, the audience participates in much of the performance as Watkins wows the room with classic sleight of hand, unbelievable mind-reading and magical wisdom passed down from his grandfather.

Since finding its home at The Palmer House on New Year’s Eve of 2011, The Magic Parlour has enjoyed phenomenal success and unimagined growth.  With only 44 seats available per show, The Magic Parlour has entertained over 30,000 guests for nearly 1,000 ticketed audiences and dozens of private groups, facilitated three truly magical wedding proposals, and has been featured in two books (Chicago Magic: A History of Stagecraft and Spectacle and 100 Things to do in Chicago Before You Die). 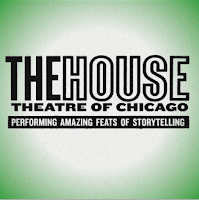 ABOUT THE HOUSE THEATRE OF CHICAGO
The House is Chicago's premier home for intimate, original works of epic story and stagecraft. Founded in 2001, led by Artistic Director Nathan Allen, and driven by an interdisciplinary ensemble of Chicago’s next generation of great storytellers, The House aims to become a laboratory and platform for the evolution of the American theatre as an inclusive and popular art form.

Since becoming eligible in 2004, The House has won 22 Joseph Jefferson Awards, became the first recipient of Broadway in Chicago’s Emerging Theater Award in 2007, and was awarded a 2014 National Theatre Company Grant by the American Theatre Wing, founder of the Tony Awards®.
Posted by Bonnie Kenaz-Mara at 9:18 AM No comments: