Adapted from the novel by Stanisław Lem

REVIEW:
By Bonnie Kenaz-Mara
Imagine an austere space station on a remote outpost, with clever sliding doors and airlocks, a small crew, and a huge problem with uninvited entities. Outside the ship, psychedelic swirls and intricate illusions form on a vast ocean. Inside, the scientists struggle with dueling desires to study the alien phenomenon and protect themselves from a potential malevolent threat. Video journals from a dead team member and an unspeaking, unsmiling child that manifests out of thin air add to the mystery. These intrepid travelers bring the audience along on quite the psychological trip with the North American premiere of SOLARIS. 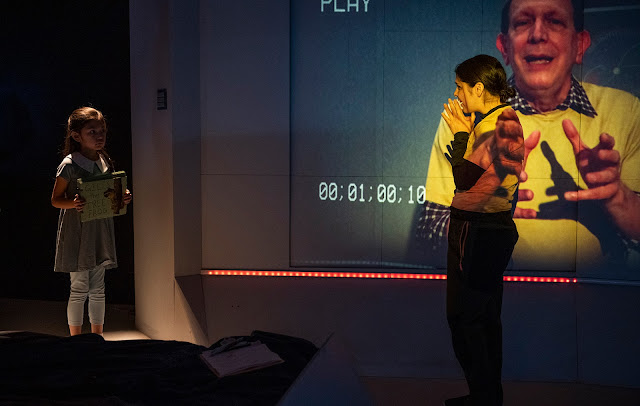 (left to right) Alexandrya Salazar, Isa Arciniegas and Larry Baldacci in Griffin Theatre Company’s North American premiere of Solaris. All photos by Michael Brosilow.
When I first read the description I was a bit leery that it would be the old space trope of man versus life threatening challenges and human stupidity.  My husband and I call these the "Lack of Oxygen Channel" movies and I detest the genre. Solaris is not that show. It's something much darker and more disturbing, as the women on board battle longing and loss, and some are willing to pay the ultimate price to inhabit a blissful illusion just a bit longer.
The Solaris cast is superb, with strong performances across the board, and compelling rapport that's a joy to see. All the elements combine to make this stellar production unique and fascinating. Special shout out to Joe Schermoly*(scenic design) and Izumi Inaba (costume design) for going above and beyond. 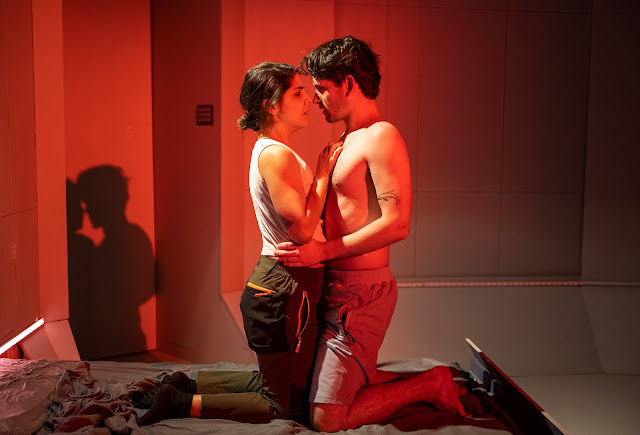 (left to right) Isa Arciniegas and John Drea
As the real world is still reeling from over 2 years of pandemic losses and lockdowns, this play's themes of isolation, interconnection, memory, and codependency really resonate. Solaris is recommended.
Bonnie is a Chicago based writer, theater critic, photographer, videographer, actress, artist and Mama. She owns two websites where she publishes frequently: ChiILLiveShows.com (adult) & ChiILMama.com (family friendly). 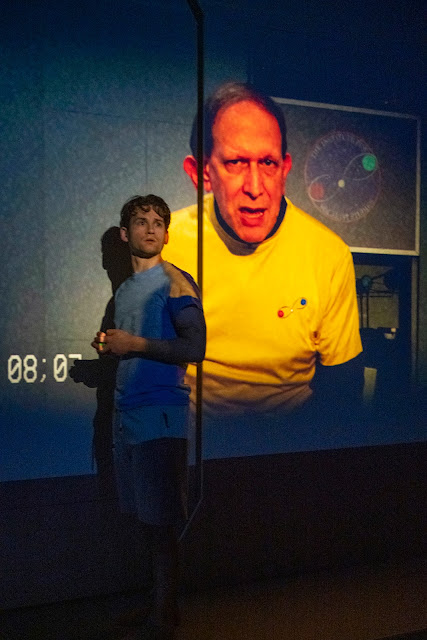 Griffin Theatre Company is pleased to welcome back live audiences this winter with the North American premiere of David Greig’s sci-fi thriller Solaris, adapted from the novel by Stanisław Lem and directed by Scott Weinstein*, playing February 19 – March 27, 2022 on Raven Theatre’s Schwartz Stage, 6157 N. Clark St. in Chicago. Tickets on sale  at www.griffintheatre.com or by calling (773) 338-2177.

Please note: Raven Theatre currently requires proof of vaccination and masking at all performances. Protocols are subject to change closer to the date of the event. For all of Raven’s current COVID-19 and vaccination information, visit raventheatre.com/covid-19.

On a space station in the far reaches of the galaxy, a small group of scientists study the isolated ocean planet of Solaris. Sent from earth to investigate reports of abnormal activity on-board, a new scientist arrives to find one crew member dead and two who are seeing things that cannot be explained. Has the prolonged isolation in space caused those on board to hallucinate? Or is it something else? A vivid exploration of loneliness, isolation and how we deal with loss, this science fiction thriller asks if we can truly understand the universe without first understanding what lies within our hearts. 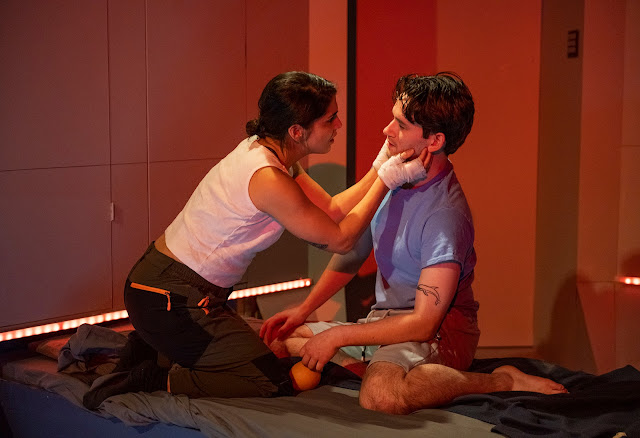 Tickets: Previews $30. Regular run $40. Students/active military and veterans $15. Group discounts are available for groups of ten or more. Tickets go on Thursday, January 27 at www.griffintheatre.com or by calling (773) 338-2177. 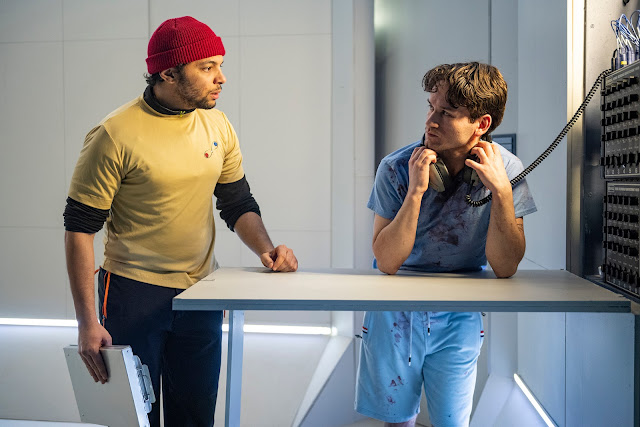 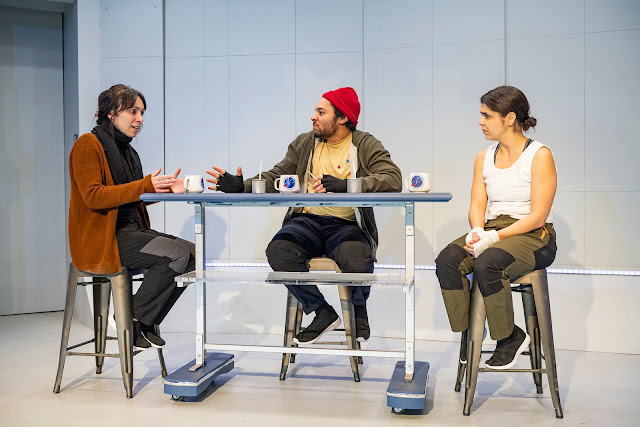 David Greig (Playwright, Adapter) is a multi-award-winning playwright who became the Artistic Director of the Royal Lyceum Edinburgh in 2015. David’s most notable plays include The Events, The Strange Undoing of Prudencia Hart, Midsummer, Dunsinane and Europe. More recently, David’s new stage adaptation of Solaris, based on Stanislaw Lem’s 1961 soviet science fiction novel, was co-produced by The Lyceum, Malthouse Theatre in Melbourne Australia and The Lyric Hammersmith. In 2019, David teamed up with original creators Bill Forsyth and Mark Knopfler to adapt the international hit film Local Hero for the stage, which premiered in Edinburgh. David’s new stage adaptation of Joe Simpson's best-selling 1988 memoir Touching the Void, which was co-produced by The Lyceum and Bristol Old Vic, enjoyed a run at The Duke of York in London’s West End in 2019/20. His other adaptations include Strindberg’s Creditors (2018) and Aeschylus’ The Suppliant Women (2016) and The Lorax (2015). David wrote the book for Charlie and the Chocolate Factory, which opened in the West End in 2013 and then transferred to Broadway in 2017.

Stanisław Lem (Author, 1921-2006) was a Polish writer of speculative fiction and essays on various subjects, including philosophy, futurology and literary criticism. Many of his science fiction stories are of satirical and humorous character. Lem's books have been translated into over 50 languages and have sold over 45 million copies. His best-known novel “Solaris” (1961) has been made into a feature film three times. Lem's works explore philosophical themes through speculations on technology, the nature of intelligence, the impossibility of communication with and understanding of alien intelligence, despair about human limitations and humanity's place in the Universe. His essays and philosophical books cover these and many other topics and his works such as “The Cyberiad,” “His Master’s Voice” and “The Star Diaries” have entered the canon of world literature. Translating his works is difficult due to Lem's elaborate neologisms and idiomatic wordplay. The Polish Parliament declared 2021 Stanisław Lem Year.

Scott Weinstein (Director) is an award-winning director and writer based in New York City. His work as a director has been seen at major regional theaters around the country and he recently won the Joseph Jefferson award for his actor-musician, chamber style re-conception of Ragtime with Griffin Theatre, where he is an ensemble member. Other favorite credits include Titanic (Griffin); Something Rotten, Murder For Two (Marriott Theatre), South Pacific (The Rev Theatre), She Kills Monsters (Steppenwolf/Buzz22 Chicago), Sex With Strangers (Cardinal Stage) and Rock of Ages (Pittsburgh CLO). Scott was the Associate and Resident Director for the Broadway National Tour, Las Vegas and Chicago productions of the hit musical Million Dollar Quartet and recently developed and directed the world premiere/first national tour of Million Dollar Quartet Christmas. He has developed new work at the Rhinebeck Writers Retreat, Pittsburgh CLO, The American Music Theatre Project, The Marriott Theatre, Route 66 Theatre, The Rev, Norwegian Creative Studios and others. Graduate of Northwestern University and proud member of the Stage Directors and Choreographers Society. He is represented by William Morris Endeavor. www.ScottGWeinstein.com 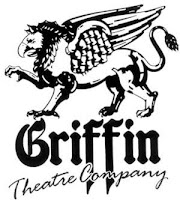 Established in 1988. the mission of the Griffin Theatre Company is to create extraordinary and meaningful theatrical experiences for both children and adults by building bridges of understanding between generations that instill in its audience an appreciation of the performing arts. Through artistic collaboration the Griffin Theatre Company produces literary adaptations, original work and classic plays that challenge and inspire, with wit, style and compassion for the audience.

The Griffin Theatre Company is the recipient of 125 Joseph Jefferson Award nominations for theater excellence in Chicago. The Griffin was honored with four 2018 Jeff awards for Ragtime including Best Ensemble, Best Musical, Best Director-Musical and Best Performer in a Supporting Role-Musical. Additionally, the company was the repeat winner of the 2016 Jeff Award for Best Production of a Play for London Wall having won the same award in 2015 for its production of Men Should Weep.

The Griffin Theatre Company is partially supported by the Illinois Arts Council, a state agency, The Gaylord & Dorothy Donnelley Foundation, The MacArthur Funds for Culture, Equity, and the Arts at the Richard H. Driehaus Foundation and the American Rescue Plan. 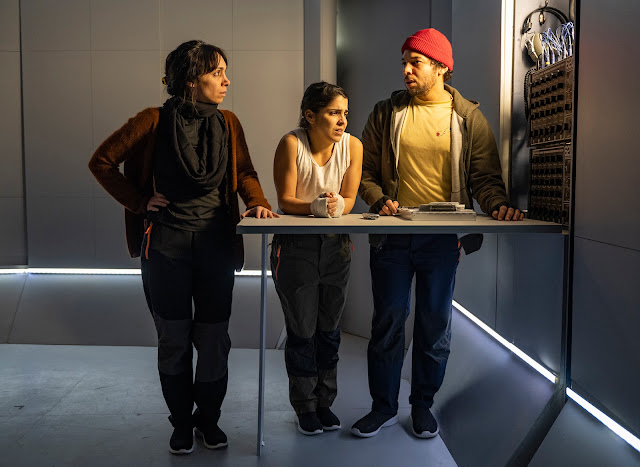