Ticket prices for $10 for individual plays or $25 for a VIP Pass good for any three admissions to an Artemisia Theatre event during the 2018-19 season. Tickets can be purchased at www.artemisiatheatre.org or by phone at 312-725-3780.


Here at ChiIL Live Shows and ChiIL Mama we're all about empowering women, giving voice to diverse experiences, and fighting inequity in the arts. As a female theatre critic and small business owner, I adore Artemisia's tag line, Theatre -- About Women For Everyone. Women centered stories are not a niche market to be marginalized. It's about time that the 51% have a say in the stories that define universal human tragedies, triumphs and the relationships in between. It's past time to go beyond just straight, white, male stories as the dominant art form in our culture. I'm particularly excited by Artemisia's festival team, a diverse group of artists who are significant players in the theater community:

*Jamal Howard, an African-American, has directed for Emerald City and New American Folk Theatre;
*Carol Ann Tan, an Asian-American, has directed with Haven and Otherworld and is currently a dramaturg on Vietgone at Writers;
*Aaron Sawyer, founding AD of Red Theater, who directed R&J The Vineyard  (the Romeo & Juliet with hearing-impaired actors)
*Beth Wolf, founding AD of Midsommer Flight (free Shakespeare in the parks)
*Rachel Sledd Iannantuoni, who has acted in Guess Who's Coming to Dinner at Court, and has also acted with Profiles and Shattered Globe
*Julie Proudfoot, founding AD of Artemisia

Ready to check out the next wave of feminist movers, shakers and culture makers?

Six directors and 30 actors from the Chicago theatre community will collaborate to create staged readings of six new feminist plays in the Artemisia Fall Festival 2018, to be performed September 24-26 and October 1-3 at The Edge Theater at 5451 N. Broadway.

Artemisia Founding Artistic Director Julie Proudfoot and Literary Manager Sharai Bohannon have curated the festival from submissions solicited from writers, agents and literary managers across the US with whom the company has had working professional relationships. One play from the six to be performed will be chosen for further development by Artemisia Artistic Director Proudfoot, who will work closely with the playwright over the next two years to develop their feminist story for a full production in Chicago.

Proudfoot defines “feminist plays” as plays that empower women and challenge audiences to see women differently. In a recent interview, she noted how many plays in the existing canon fail to adequately portray women, saying “We don’t necessarily have feminist three-dimensional characters with all the flaws and virtues and complexities of great male characters. It matters to me because women are long overdue to be recognized on a level equal to men, especially in terms of leadership, humanity, complexity and agency. I think it should matter to everyone because Artemisia’s work inspires gender parity, which has been statistically shown to make for better and safer communities.”

While the scripts selected for this year’s festival all feature women who have agency and who are the center of their own narratives, the plays have a diversity of topics and genres. Themes to be explored include cultural differences between diverse societies in their treatment and status of women, mother-daughter relationships, and tensions between economic classes. The ranges of genres include dramas, satire and thrillers. The writers are not exclusively female – one male playwright will be represented alongside the five women writers. Proudfoot says, “We believe that men as well as women can be feminists.”

Over each of the Festival’s six nights, a different new play is staged as a reading. Talkbacks focusing on empowerment, inclusion and diversity will follow each reading. There will be a closing night party on October 3rd. 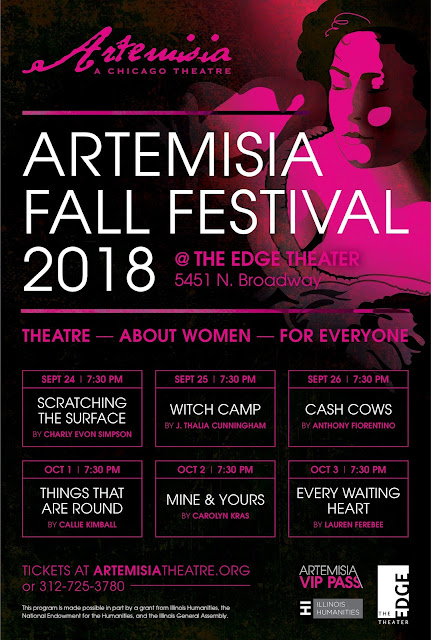 The six plays to be performed, the performance dates, and the artists involved for each are as follows:

Monday, October 1, 7:30 PM
THINGS THAT ARE ROUND, by Callie Kimball. Directed by Aaron Sawyer.
Two women, a dentist specializing in existential terror, and the worst baby sitter ever who has dreams of becoming an opera singer, square off in a strange ballet of truth or dare.
Cast: Julie Proudfoot, Alejandra Vivanco

Tuesday, October 2, 7:30 PM
MINE AND YOURS, by Carolyn Kras. Directed by Carol Ann Tan.
A foreclosure loophole pits new buyers against former owners in a struggle to claim the house as their home through cohabitation.
Cast: Barbara Roeder Harris, Steve Silver, Isabella Gerasole, Chase Wheaton-Werle

Charly Evon Simpson (SCRATCHING THE SURFACE) is a playwright and performer from New York City. Her plays include JUMP, SCRATCHING THE SURFACE, HOTTENTOTTED, WHILE WE WAIT, and more. Her work has been seen and/or developed with NNPN at its Kennedy Center MFA Playwright's Workshop, Ensemble Studio Theatre, Ars Nova, The Flea, and others. She's a member of 17/18 Clubbed Thumb Early Career Writers' Group, The Amoralists' 2018-19 'Wright Club, and is The Pack's current playwright-in-residence. Charly holds a Bachelor of Arts from Brown and Master of Fine Arts from Hunter College. www.charlyevonsimpson.com

J. Thalia Cunningham (WITCH CAMP) is a playwright, travel writer, and photographer.  Her plays have been commissioned, produced, and developed in United States and internationally. She has been published by Smith & Kraus and Applause. She is a proud member of: Actors Studio; League of Professional Theatre Women; The WorkShop Theater Company. J. Thalia holds a Bachelor of Arts from Johns Hopkins University has traveled to 120 countries and has written for national travel publications.

Anthony Fiorentino (CASH COWS) is a Chicago-based playwright whose plays have been produced at the Athenaeum Theatre, Stage 773, Prop Theatre, the American Theatre of Actors, the Actors' Theatre of Santa Cruz, and the Attic Playhouse. His plays ALL MY LOVE and THE FEAST have been nominated for the Jeff Award for Best New Play. He is an affiliated artist with the National New Play Network. He was a finalist for the Stanley Drama Award in 2011, and a Semi-finalist for Eugene O'Neill Theatre Center National Playwright's Conference (2008).

Callie Kimball (THINGS THAT ARE ROUND) is a MacDowell Fellow, a two-time winner of the Rita & Burton Goldberg Award, a finalist for the O'Neill, a semifinalist for the Princess Grace Award, and a four-time nominee for the Susan Smith Blackburn Award. Her plays have appeared in NY, Chicago, LA, and DC, at the Kennedy Center, Portland Stage Company, Lark Play Development Center, Dramatic Repertory Company, Halcyon Theatre, Stoneham Theatre, Echo Theatre, The Brick Theater, Project Y Theatre, Team Awesome Robot, Washington Shakespeare Company, Mad Horse Theatre, and more. She is currently writing a commission for ShadowCatcher Productions inspired by the letters of her grandparents during World War II. THINGS THAT ARE ROUND will have its world premiere this November at Rep Stage. Plays include: SOFONISBA (Clauder Gold Prize Winner, Kilroys' List), RUSH, ALLIGATOR ROAD, DREAMS OF THE PENNY GODS.

Carolyn Kras is an LA-based playwright from Chicago. She was Playwright in Residence at Selladoor Worldwide through the support of the Fulbright LUSK Award to the United Kingdom. Her play The Subject has had 20 readings, including a United Nations Orange Day Reading in London. Carolyn is the recipient of the Visionary Playwright Award, Hamptons International Film Festival Screenwriters' Lab selection, Alfred P. Sloan Screenwriting Award, Aspen Ideas Festival Scholar selection, Disquiet International Short Play Award, and Plume & Pellicule Award.   Her plays have been developed and or produced at The Blank Theatre, The Road Theatre, Chicago Dramatists, Stage Left Theatre, Centenary Stage Company, Pittsburgh Irish & Classical Theatre, 20% Theatre Company Chicago, Williams Street Rep, Theater Masters, Found Stages, and the Edinburgh Festival Fringe.  She is a member of The Playwrights Union LA and holds a Master of Fine Arts from Carnegie Mellon University. www.carolynkras.com

Lauren Ferebee (EVERY WAITING HEART) Lauren's plays have been praised as "exquisite" (Applause, Applause) and "a fine balance between laugh-out-loud absurdity and gut-wrenching human drama" (DC Metro Theater Arts). Her play THE MEETING was recently a national finalist for the Kennedy Center's Gary Garrison 10-Minute Play Award. Previous plays include THE RECKLESS SEASON (finalist, 2016 Princess Grace Award, semi-finalist, 2014 Shakespeare's Sister Fellowship), and SEXUAL GEOGRAPHY (finalist, 2015 Reva Shiner Comedy Award). Smith & Kraus will publish four monologues from THE RECKLESS SEASON in the 2018 Best Stage Monologues Series She was a nominee for the 2016 USA Fellowship in theatre. She holds a Bachelor of Fine Arts from NYU/Tisch. www.laurenferebee.com 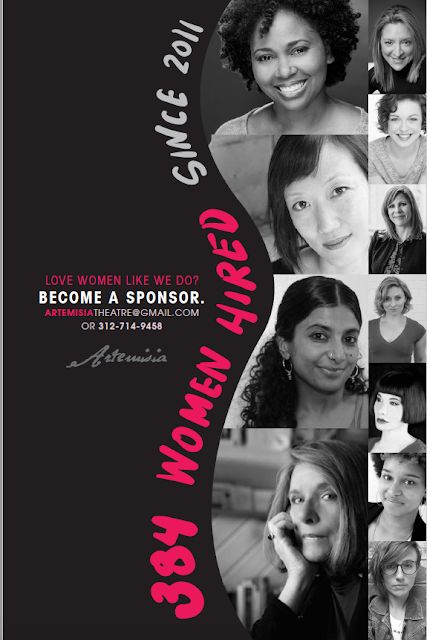 Chicago’s premiere professional theatre nurturing feminist playwrights with a one-of-a-kind development process that culminates in remarkable and unforgettable productions.
Join us in bettering our community by empowering women and girls through theatre.  Partnering with Artemisia gives you unique media and marketing opportunities, direct contact with our audience and talent, and the chance to become part of a powerful movement – #ThePresentIsFemale 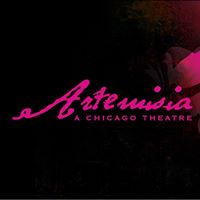 ABOUT ARTEMISIA: A CHICAGO THEATRE
Founded in 2011, Artemisia, A Chicago Theatre is a professional, not-for-profit theatre that produces all-new, dynamic and empowering plays that center on women who have agency, independence, and are the focal point of their own narratives, to create gender parity both onstage and off. Each season, Artemisia produces its Fall Festival of staged new play readings as well as fully staged productions of new plays it has developed. Artemisia is a 501 c 3 organization and, as such, relies heavily on public support to fund theatre that promotes equality and social justice for all women and girls.

Artemisia Gentileschi, was a Baroque artist whose paintings depicted violence with fierce honesty and elegance. For centuries after her death, her art was attributed to men. Feminist curators in the late 1970’s rediscovered Artemisia, who is now considered the greatest female painter prior to the modern period. A common theme in Gentileschi’s later work is women in moments of power, or triumph, which is why she is the perfect namesake for Artemisia.

Posted by Bonnie Kenaz-Mara at 4:21 PM No comments: