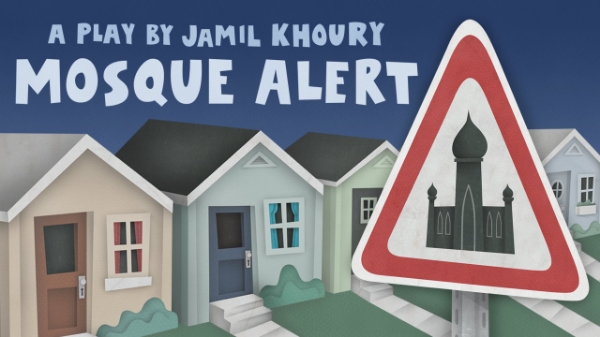 Inspired by the "Ground Zero Mosque" controversy in New York City, Mosque Alert tells the story of three fictional families living in Naperville, Illinois, whose lives are interrupted by a proposed Islamic Center on the site of a beloved local landmark. Mosque Alert explores the intersections of zoning and Islamophobia with humor, family drama, and refreshingly blunt honesty. 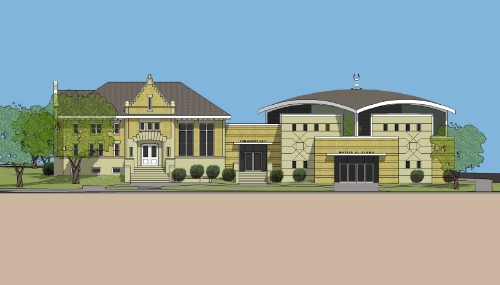 JAMIL KHOURY (Playwright) is the Founding Artistic Director of Silk Road Rising. He received the 2013 ChangeMaker Award from South Asian Americans Leading Together (SAALT) for the unique, online interactive new play development and civic engagement project that shaped Mosque Alert. His short play 63rd and Kedzie: The Arab American Cultural Center was commissioned and produced as part of Theatre Seven’s The Chicago Landmark Project (2011).  He also conceived of and was a featured playwright in Silk Road’s production of The DNA Trail: A Genealogy of Short Plays about Ancestry, Identity, and Utter Confusion (2010) for which he wrote the short play WASP: White Arab Slovak Pole. Other plays include: Precious Stones (2003) (Gay Chicago Magazine’s 2003 After Dark Award for Outstanding New Work); Azizati (1997) ; and Fitna: Women and Chaos in the Arab World (1995). He also conceived of and devised two critically acclaimed cabarets: Re-Spiced: A Silk Road Cabaret (2012) and Broadway Sings the Silk Road (2009). Khoury’s video/film work includes the video plays Multi Meets Poly: Multiculturalism and Polyculturalism Go On a First Date (2014), The Balancing Arab (2012), and both/and (2011).  His documentary films include Sacred Stages: A Church, a Theatre, and a Story (2014) and Not Quite White: Arabs, Slavs, and the Contours of Contested Whiteness (2012).  He is the 2015 recipient of the Community Leader Award from the Association for Asian American Studies, the 2013 recipient of the Actor’s Equity Association’s Kathryn V. Lamkey Award for promoting diversity and inclusion in theatre, and the 2010 recipient of the 3Arts Artist Award for Playwriting.

EDWARD TORRES (Director) recently directed Macbeth for The Public’s Mobile Shakespeare Unit. Previously, he directed the CA premiere of Water by the Spoonful at the Old Globe Theatre and the world premiere of Quiara Alegría Hudes’ The Happiest Song Plays Last for Goodman Theatre. He directed the world premiere of Kristoffer Diaz’s The Elaborate Entrance of Chad Deity at Victory Gardens Theater (produced in association with Teatro Vista), which was named Best Play of 2009 by the Chicago Tribune, Chicago Sun-Times and Time Out Chicago, was a finalist for the Pulitzer Prize and earned Joseph Jefferson Awards for Best Production and Best Director. He also directed subsequent productions Off-Broadway at Second Stage Theatre (2011 Lucille Lortel Award for Outstanding Play and Obie Award for Best New American Play) and at Geffen Playhouse to critical acclaim. Torres has been a producer for 18 years and is the cofounder and former artistic director of Teatro Vista. He was the recipient of a 2010 Arts Artist Award and was featured as guest director at the 2011 Eugene O’Neill Theater Center National Playwrights Conference. Torres has a B.A. in Theatre from Roosevelt University and an M.F.A. in film from Columbia College Chicago. He served on the Illinois Arts Council and on the National Endowment for the Arts Theater Panel (2005-07) (2013) and the MAP Fund Theatre Panel (2008).

RENGIN ALTAY (Emily Baker) has Chicago credits that include: Awake and Sing (Steppenwolf Theatre Company); Gypsy, Macbeth and The Merchant of Venice (Chicago Shakespeare Theater); Float (About Face Theatre); The Vagina Monologues (Apollo Theater Chicago); Long Day’s Journey Into Night (Irish Repertory and Galway Arts Festival); A Little Night Music, The Iceman Cometh (Goodman Theatre). Regional credits include: As You Like It (Huntington Theatre) and Arms and the Man (Madison Repertory Theatre). Film credits include Light It Up and Stranger than Fiction. Television and voiceover credits include: Chicago Fire, E.R., Early Edition, The Human Factor and Yeesha in the Myst computer-game series.

ROM BARKHORDAR (Tawfiq Qabbani) appeared this past summer in Ayad Akhtar's The Who and the What at Victory Gardens. Other notable Chicago credits include In a Garden at A Red Orchid Theatre (Jeff nomination for best Actor), Night Over Erzinga at  Silk Road Rising, Around the World in 80 Days at Lookingglass, The Elephant Man at Steppenwolf, and Pravda at Timeline. Rom Barkhordar has also worked at the Goodman, Griffin, Lifeline, Eclipse, Defiant, Trap Door, City Lit, and Writer's theatres. TV credits include Chicago Fire, Mind Games, Boss, and The Beast.

MARK ULRICH (Ted Baker) recently appeared as Musa in Yasmina’s Necklace at 16th Street
Theater, and FBI Agent Zack Shelton in the long running Assassination Theater. Other Chicago credits include Mariela In The Desert and The Sins Of Sor Juana (The Goodman), The Book Thief and How Long Will I Cry (Steppenwolf), A View From The Bridge (Teatro Vista), American Wee Pie Falling: A Wake, These Shining Lives, The Walls, and Silence (Rivendell Theatre), where he is a proud member of their ensemble. He is also a proud Artistic Associate at Chicago Dramatists.

SAHAR DIKA (Samar Qabbani) is a Detroit native who comes from a primarily musical background. Her theater credits include Hairspray, Grease, Footloose, and The Female Odd Couple performed in various theaters around the Metro Detroit area.

NINA GANET (Jennifer Baker) is a Naperville native who started her professional career at the American Girl Theater in Chicago at age 13. She recently graduated with a BA in acting from Illinois State University. She played the principal role, Julie, in Michael Glover Smith's independent film Cool Apocalypse (Best Dramatic Feature winner at the Illinois International Film Festival 2015.) Her role as Autumn Gamble, in Stephen Cone's Henry Gamble's Birthday Party, has also been proudly circuiting film festivals around the country.

RULA GARDENIER (Amina Qabbani) has theater credits that include for you were a stranger, which she wrote, performed, and produced with Donna Blue Lachman. She was seen last year on the TV show The Following opposite Michael Ealy. Rula will be seen in the feature film Imperfections and the short film Changing Tides in 2017. She is a member of SAG/AFTRA.

RILEY MCILVEEN (Carl Baker) has theater credits that include We Gotta Bingo! at Chicago Theatre Works, A Nice Indian Boy at Rasaka Theatre, Inventing Van Gogh at Strange Bedfellows, and Hair at The Hideout. Riley received his BFA from the University of Evansville and is a proud graduate of The School of Steppenwolf, class of 2014.

ANDREW L. SAENZ (Farid Qabbani) received his BFA in Performance from Baylor University. He is an ensemble member of The Ruckus. His Chicago credits include Barbecue Apocalypse at the The Ruckus Theater, Exit Strategy at Jackalope Theatre Company, Blood and Gifts at TimeLine Theatre Company, and Hellcab at Profiles Theatre. Television credits include Chicago P.D. (NBC) and Sirens (USA Network).

FRANK SAWA (Mostafa Khalil) studied with the Bonstelle Theatre’s BFA program and briefly abroad with the Moscow Art Theatre (Stanislavsky School).  He has been a part of Chicago’s theatre scene for the last 8 years and was recently seen at Timeline Theatre in Inana and at Remy Bumppo in Love and Information.

STEVE SILVER (Daniel Baker) has theater credits that include Guys and Dolls at Light Opera Works, The Other Place at Profiles Theatre, Nineteen Eighty-Four at Steppenwolf Theatre, Bells are Ringing at Porchlight Music Theatre, From Up Here at Towle Theater (a US premiere), Sylvia and It’s a Wonderful Life: A Radio Play at Oil Lamp Theater, and A Crime in the Neighborhood at City Lit Theater (a world premiere). Film/TV credits include Chicago Fire as well as several independent films.