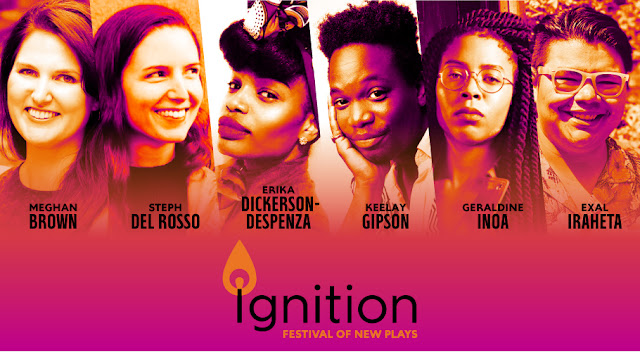 Victory Gardens Theater Artistic Director Chay Yew, Executive Director Erica Daniels and Director of New Play Development Skyler Gray announce the lineup for the 2019 IGNITION Festival of New Plays, including The Tasters by Meghan Brown; The Gradient by Steph Del Rosso; [hieroglyph] by Erika Dickerson-Despenza; #NEWSLAVES by Keelay Gipson; Reckoning: Furies from a New Queer Nation by Geraldine Inoa; and They Could Give No Name by Exal Iraheta. The 2019 Festival runs August 2 -4, 2019 at Victory Gardens Theater, located at 2433 N Lincoln Avenue.

All readings are free and open to the public, though a reservation is strongly encouraged. For more information or to RSVP, visit www.victorygardens.org/ignition or call the Victory Gardens Box Office at 773.871.3000.

IGNITION’s six selected plays will be presented in a festival of readings and will be directed by leading artists from Chicago, including Lili-Anne Brown, Mikael Burke, Monty Cole, Elly Green, Devon de Mayo, and Chay Yew.

"I'm excited to introduce a brave new generation of American playwrights for our eleventh edition of Victory Gardens' IGNITION Festival of New Plays. Since its inception in 2008, we have given world premiere productions to some of our country's most innovative voices from Branden Jacobs-Jenkins and Lauren Yee to Jackie Sibblies Drury and Kristoffer Diaz. We're thrilled to have shared these plays with Chicagoans and the world," says Artistic Director Chay Yew. "This year, we give a home to emerging playwrights who shine light on our diverse humanity, whose powerful plays create meaningful dialogue towards a more unified and equitable world."

"This year's Ignition Festival includes six of the most exciting new voices writing today. Each piece is exploring our complicated world and the people in it with a rich complexity and vibrant urgency that demands these stories be told,” says Director of New Play Development Skyler Gray. “I could not be more excited to introduce Chicago to these powerhouse writers who are paving a new road in the American Theater."

This Is the Story of Football and Football is the Story of America. A Sports Fantasia on the Commodification of the Black Body in America - Using the NFL Draft as a jumping off point, the show follows three black men as they attempt to free themselves from the history of a nation pitted against itself.

Saturday, August 3 at 11am
They Could Give No Name
By Exal Iraheta
Directed by Chay Yew

Somewhere in the southern end of Arizona, medical examiner Nellie Ramirez descends into near-madness when her fiancé, a border patrol agent, accidentally kills a young immigrant girl. In order to save her future family, Nellie must make a decision that threatens to tear her life apart. Little does she know that soon the desert will come to collect what is due to it. This macabre, magical play takes an unsettling look at the complexities of identity, cruelty of immigration, and the power behind a name.

Exal Iraheta is a Salvadorian American playwright & screenwriter, born in Houston, TX who is now based in Chicago, IL. Sometimes humorous and often uncomfortable, his writing explores the intersections of Latinx realities, innocence, queerness, violence, and sex. Exal earned an MFA from Northwestern University’s Writing for the Screen and Stage program in 2019, and a BFA from the School of the Art Institute of Chicago in Film & Video Production in 2009. He has worked with several Chicago-based organizations as videographer and editor, media advisor, and film/video equipment instructor. Recently, his short play Open Venas received a production as part of Theater Master's 2019 Take Ten Festival NYC. And his full-length play Rules of a Closed Door was a semi-finalist for 2019 Activate: Midwest New Play Fest, with an excerpt reading at The Goodman Theater the previous year. Exal is a 2018 Hispanic Scholarship Fund Scholar, 2018 Fornés Playwriting Workshop participant, and 2019 Theater Masters Playwright.

2015: a year when the Supreme Court's landmark ruling on marriage equality coincided with a record number of trans women being murdered. Reckoning: Furies from a New Queer Nation examines the most pressing issues affecting Queer America today: gay white male privilege and the systemic oppression of trans women. Because when a Supreme Court ruling like marriage equality passes, we must ask: what did we accomplish and who did we leave behind?

Geraldine Inoa is a writer for theater and television. She is a story editor for AMC's “The Walking Dead.” Her play Scraps had its world premiere production at the Flea Theater in New York during the 2018/19 season, marking her professional debut. Scraps is making its West Coast premiere at The Matrix Theatre in Los Angeles during summer 2019. As a playwright, she is an alumnus of The Public Theater's Emerging Writers Group and the inaugural recipient of The Shonda Rhimes Unsung Voices Playwriting Commission. She is a L. Arnold Weissberg New Play Award finalist, a P73 Playwriting Fellowship finalist, and a twice-named Eugene O’Neill National Playwrights Conference semifinalist. Her work has been developed at the Atlantic Theater Company and the Labyrinth Theater Company. She holds a B.A. from New York University’s Gallatin School of Individualized Study. She resides in Los Angeles with her dog Alfred.

With government leaders getting poisoned left and right, the Tasters have an important job — eating delicious, gourmet meals, and then waiting to see if they die. When rebellious Taster Elyse goes on hunger strike, she kicks off a series of events that will change the course of history… while putting all of the Tasters’ lives in jeopardy. In her sharp, energetic new play, Meghan Brown (The Pliant Girls) explores the nuances of political resistance, self-interest, and individual action creating hope in the face of hopelessness.

Meghan is an Ovation Award-winning playwright, screenwriter, and lyricist based in Los Angeles. Current projects include These Girls Have Demons (Pittsburgh CLO SPARK Festival), Cowboy Elektra (with Rogue Artists Ensemble), The Tasters (Portland Center Stage’s JAW Festival), What Happened While Hero Was Dead (Moving Arts’ MADlab Development Lab), and the film adaptation of her play, The Kill-or-Dies. Meghan wrote the lyrics for the song cycle Untuned Ears Hear Nothing but Discord, which premiered at Lincoln Center as part of In Need of Music: The Songs of Ben Toth with Tony Award-winner Lindsay Mendez as Emma Goldman. Full-length plays include The Pliant Girls (winner of the 2014 Ovation Award for Playwriting for an Original Play), The Kill-or-Dies (Max K. Lerner Fellowship winner, Princess Grace Award semifinalist), Psyche (Princess Grace Award finalist), The Fire Room (Hollywood Fringe Festival Award winner), The Gypsy Machine, This Is Happening Now, Perfect Teeth for Crocodile Land, and Shine Darkly, Illyria. She wrote the libretto for Operaworks’ social just opera The Discord Altar, and the book and lyrics for a new musical version of Jane Austen’s Emma with composer Sarah Taylor Ellis. Emma has been workshopped in London, Washington D.C., Brooklyn, Orlando, Los Angeles, and New York City. www.MeghanBrown.net


Sunday, August 4 at 11am
[hieroglyph]
By Erika Dickerson-Despenza
Directed by Lili-Anne Brown

Involuntarily displaced in Chicago two months post-Katrina, 13-year-old Davis wrestles with the cultural landscape of a new city and school community while secretly coping with the PTSD of an assault at the Superdome. With her mother still in New Orleans committed to the fight for Black land ownership and her father committed to starting a new life in the Midwest, divorce threatens to further separate a family already torn apart. Will Davis be left hanging in the balance? [hieroglyph] traverses the intersection of environmental racism, sexual violence, and displacement, examining the psychological effects of a state-sanctioned man-made disaster on the most vulnerable members of the Katrina diaspora.

Tess just landed her dream job at sleek tech start-up The Gradient: a center where men accused of sexual misconduct are sent to be rehabilitated. The clients go in with a lifetime of toxic male conditioning and emerge as new people, sensitized and redeemed. It sounds too good to be true, and maybe it is. The Gradient asks what it means to say I'm sorry and whether it's possible for people to truly change.

Steph Del Rosso is a playwright, film and television writer, and educator. Her play 53% Of is the winner of the Alliance/Kendeda National Graduate Playwriting Competition and will receive its world premiere at the Alliance Theatre in March 2020. Her play Fill Fill Fill Fill Fill Fill Fill premiered at The Flea Theater and is published by Dramatists Play Service, Inc. Her work has been developed or produced by Soho Rep, Clubbed Thumb, JACK, New York Stage and Film, The Lark, Seven Devils Playwrights Conference, Ojai Playwrights Conference, Colt Coeur, SPACE on Ryder Farm, the Kennedy Center, and others. She is a Theater Masters Visionary Playwright and is currently commissioned by Studio Theatre and La Jolla Playhouse. BA, Northwestern University. MFA, UC-San Diego.

Performances are at Victory Gardens Theater, 2433 N Lincoln Avenue, in the heart of Chicago’s Lincoln Park neighborhood. Admission to all festival readings and events is free, though an RSVP is strongly encouraged. For more information or to RSVP, visit www.victorygardens.org/ignition/ or call the Victory Gardens Box Office at 773.871.3000.

Under the leadership of Artistic Director Chay Yew and Executive Director Erica Daniels, Victory Gardens is dedicated to artistic excellence while creating a vital, contemporary American Theater that is accessible and relevant to all people through productions of challenging new plays and musicals. Victory Gardens Theater is committed to the development, production and support of new plays that has been the mission of the theater since its founding, set forth by Dennis Začek, Marcelle McVay, and the original founders of Victory Gardens Theater.

Posted by Bonnie Kenaz-Mara at 1:17 PM No comments: