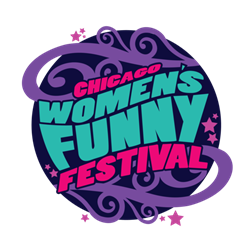 Join over 400 queens of comedy from all around the world for one of the biggest funny festivals in the country, now with their first ever all-Spanish speaking set, August 22-25


Chicago knows funny, and we're ready to launch some laughs again, with four days of fem fun. This year, for the first time ever, the Chicago Women’s Funny Festival will also feature an all-Spanish speaking slot showcasing a stand up show, a sketch group, and two improv groups!

Blending long term veterans with fresh newcomers, the fest packs over 80 shows into four funny-filled days, making it easier than ever to discover new groups to love.

The full schedule and searchable calendar for the 8th Annual Chicago Women’s Funny Festival can be viewed at www.stage773.com/cwff-lineup.

“Chicago is home to one of the biggest comedy scenes in the world, and with that comes an immeasurable number of very funny and highly talented women who are constantly re-defining the industry and setting the stage for what it means to be a comedian,” said Valentine. “We are honored to have the opportunity to unite these women and deliver a festival that is full of fun laughs, inclusion, and empowerment.”

Featuring an array of veteran talent and newcomers, highlights for the 2019 festival include stand up acts like longtime favorite, Patti Vasquez, whose solo show will take audiences on a journey of awkward dates, embarrassing moments and other funny stories of personal humiliation that will make you think “Wow, I guess my life isn’t so bad after all”, Dina Nina Martinez, who the Late Late Show’s James Corden hails as “…very funny”, longtime couple and dynamic comedy duo Anna Vocino and Loren Tarquinio of Married AF with their special part stand up, party storytelling, part improv set, and ventriloquist Hannah Leskosky with her magical mouth moving and substance abusing puppet unicorn, Marzipan Lavender Sparkles.

The brand new all-Spanish speaking set of shows will feature standup comedian, Eliana La Casa, an Argentinian comedian living in Chicago who blends personal stories and opinions into laugh out loud relatable moments, La Carne Asada #2: The Seasoning, a hilarious sketch show re-living all that a Latinx family dinner has to offer, Las Tinas Improv, creating a one night only audience based telenovela, and Ratas De Dos Patas, who will translate suggestions into Spanish to create hilarious streetwise teaching moments for the audience.

Chicago Women’s Funny Festival was founded in 2012 when producers Jill Valentine and Liz McArthur wanted to build a comedy festival where women could come together and celebrate all art forms of comedy under one roof. The first festival boasted 66 shows and 400 performers in five days. Women’s Fest also hosted events throughout the week where women from across the country could network with each other and more importantly, celebrate one another’s work. The response from comedians and audience members was overwhelmingly positive – which is why the festival is coming back for an eighth year.

Jill Valentine is a Chicago Southside native who has been the Executive Director of the Chicago Sketch Comedy Festival (the largest of its kind in the nation) since the festival’s inception in 2000. She is also Stage 773’s Executive Director and a founding principal of the building. Jill performs in several popular and critically acclaimed groups in Chicago, including The Cupid Players, Off Off Broadzway and Feminine Gentleman who have performed all over the country.

Liz McArthur hails from St. Louis and has worked with the Chicago Sketch Comedy Festival since 2005. McArthur can be seen with groups such as Off Off Broadzway, OneTwoThree Comedy, and Feminine Gentlemen. McArthur is also part of the hit zombie comedy Musical of the Living Dead.

About Stage 773
Stage 773 is a vibrant anchor of the Belmont Theatre District and home to Chicago’s finest off-Loop talent. As a performance and tenant venue, our four stages provide entertainment for everyone: comedy, theatre, dance, musicals and more. We are a not-for-profit, connecting and catalyzing the theater community, while showcasing established artists and incubating up-and-coming talent.
Posted by Bonnie Kenaz-Mara at 8:16 AM No comments: