We've been promoting this show since the first read through and have heard great things. Sadly, we've been shooting travel features out of state and we've been swamped since they opened and haven't made it over there to review. Still, check it out if you can. We are long time fans of Babes With Blades and so stoked that they call Chicago home. We've seen them tackle some amazing works over the years.


Like Hunger Games and women as protagonists who don't just lay around like the Disney coma princesses, waiting to be rescued?   Come check out some real life women who kick booty with sword fights & stage combat.

Here at ChiIL Live Shows, Babes With Blades have been favorites of ours for years.   Their shows are aimed at adults, but my tweens adore them, too! 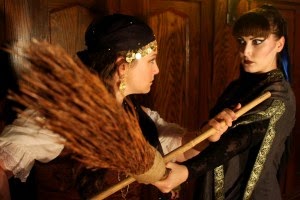 “Under Delia Ford’s direction, the actors take on their roles with distinction…Kimberly Logan (Crone) anchors the show with cackling wisdom…(Stefanie) Johnsen nails the physical comedy…Jennifer L. Mickelson garners laughs from her stoic presence…Loren Jones charms as the high-strung-witch-in-training” – Katy Walsh, The Fourth Walsh

Mass hysteria grips a colonial town as public witch hunts pit brother against brother. But when local witches attempt to band together to stop the madness, they quickly discover that sister against sister can be far more wicked.

On the West Stage at the Raven Theatre Complex
6157 N. Clark St., Chicago 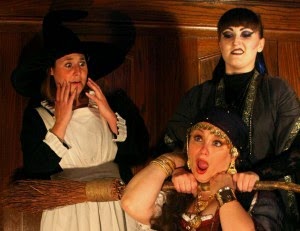 Witch Slap is the winner of the 2013-14 Joining Sword & Pen competition, sponsored since its inception by Fight Master David Woolley, SAFD.

**(COINCIDENCE ALERT: We just saw David Woolley in the audience and spoke with him at the after party last night at the press opening of King Lear at Chicago Shakespeare. You may recognize him from The Swordsmen, frequent favorites on the Bristol Renaissance Faire and the Ohio Ren Faire circuits. We've been covering them for years.)
Posted by Bonnie Kenaz-Mara at 8:47 AM No comments: