Things have been hoppin' here in Chi, IL.   The weather may be getting chilly, but you can still chiIL out with ChiIL Live Shows and ChiIL Mama this fall & winter.   We're all over the local theatre & music scene, events and giveaways.  Our HUGE annual ChiIL Holidaze Giveaways & ChiIL Picks Gift List will go live November 15th-December 15th with LOADS of great goodie to win and our ChiIL Picks List for unique gifts for all ages.

Spread the word for more entries and enter like we vote in Chi, IL... early and often! 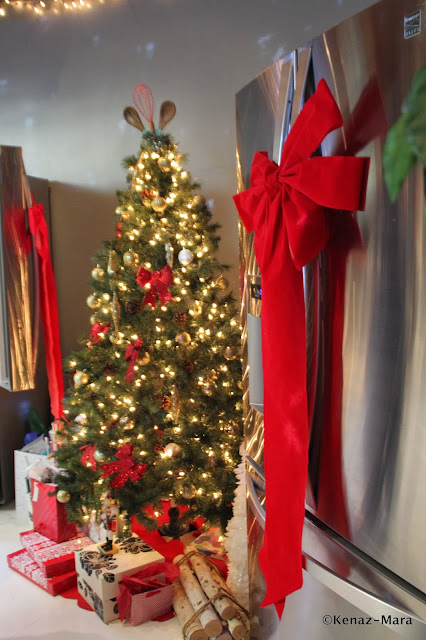 Disclaimer:   Thanks to all the generous musicians, toy companies, distributors and PR firms that send us products for our giveaways and for review purposes. As always, all opinions are our own.


Highlights:
Here's what we've been up to, what's already posted, what you can look forward to seeing right here in the near future, and so much more.

Keep up with the latest:

We're also back again for the 3rd year as press sponsor for Beat Kitchen's popular weekly Sunday noon Concerts for Kids, which means we give away free tickets EVERY week.  We also have free kindie tickets for shows at Schubas like the award winning Mister G, Baby Loves Disco at Lincoln Hall & more. 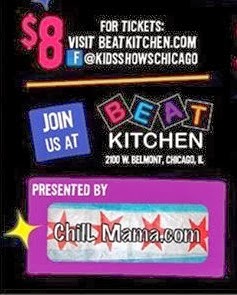 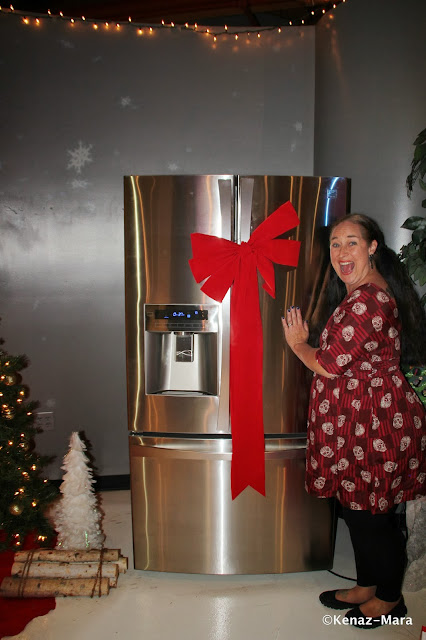 Yes there IS a SANTA CLAUS!!   ChiIL Mama was elated to be invited to The Annual Kenmore Blogger Summit with 24 top bloggers flown in from all over the country.   It was a fun filled, informative weekend and we'll have a full photo recap up soon.

Within a half hour I WON a $2,500 Kenmore French Door Fridge/Bottom Freezer in a blind gift grab bag!!  This has been a high point of my fall for sure.

Even better... the rules were you could pick 1 from under the tree or snag one from someone else & the final 10 seconds were a swapping free for all.   I had a different bag, that had been stolen from others several times before, and at the last second another blogger snagged it from me and swapped in a sweater print box.   What I lost?...A garlic press! 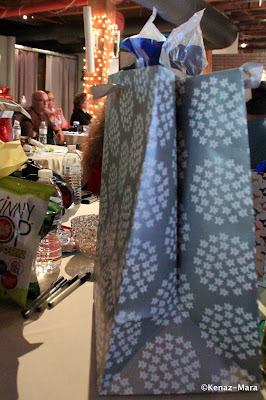 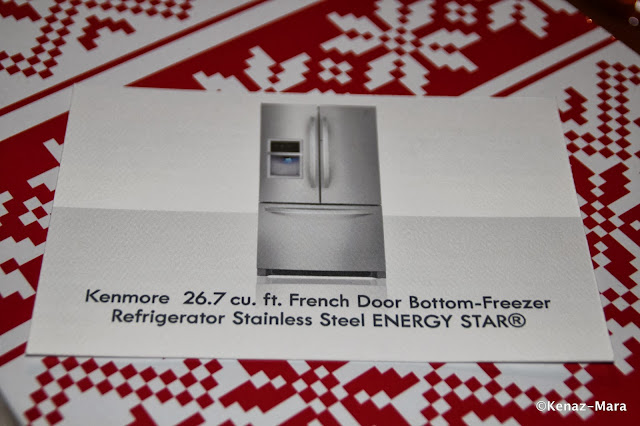 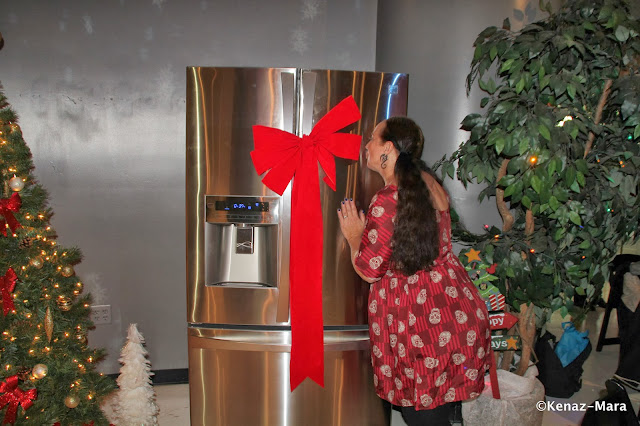 SANTA LIVES!!!!   Don't tell me there's no such thing as holiday magic.

The other blogger was a good sport about it.   I hugged her and thanked her profusely.


ACT OUT:
Fall Theatre Reviews For

and more!   We'll be adding more to this stellar show list as the month progresses.

Prizes/Ticket Giveaways:  As always, our free tickets and events listings are Chicago centered but our giveaways & reviews are for Chi, IL and beyond (nationwide & sometimes Canada too).   We'll have all past winnings coming from us shipped out before the 10th, so if you're still eagerly awaiting CDs, books, toys, etc. thanks for your patience and we've got you covered.


Some of our prizes come directly from the musicians/distributor/PR peeps etc. and in that case, please wait a month and if you still have not gotten your winnings, shoot us an e-mail and we'll do everything possible to expedite things and get an ETA from them.   Unfortunately we can not replace anything lost in the mail.   It has never happened yet, that I'm aware of, but a few things have gone missing in the lovely Chi-town mail enroute TO me.

Disclaimer:   Thanks to all the generous musicians, toy companies, distributors and PR firms that send us products for our giveaways and for review purposes. As always, all opinions are our own. 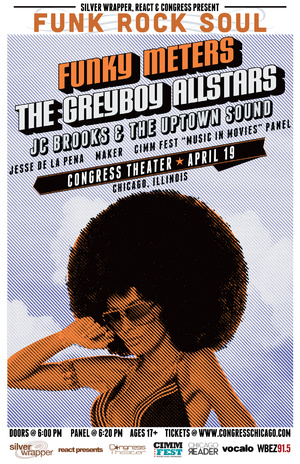 Music and film... together in one rockin' raucous 4 day fest.   ChiIL Live Shows will be there... will YOU?!   Check back early and often for loads of our original content from CIMMfest 2012, and hot happenings for 2013 as we count down to the 5th Annual CIMMfest April 18-21!

Of course, some of our fest favs are the little screenings (particularly punk & metal related) that don't make the official, featured hot happenings and famous faces.  The beauty of a multi venue fest is choice.   Take some time to check out the full listings here and make your own path.   Still, here's the official word on what's awesome and upcoming.   And some of it we wouldn't miss for any obscure indie release.

An expanded live music component with concerts by Lydia Loveless, Corey Harris, Pontiak and a Funk Rock Soul triple bill with the funky METERS, Greyboy Allstars and JC Brooks & the Uptown Sound; CIMMpathy for The Stones, celebrating The Rolling Stones’ 50 years of music on film; a special film section, award ceremony and concert with maverick filmmaker Melvin Van Peebles; an evening of music and movies with the legendary Van Dyke Parks and his filmmaker son, Richard; a Blues film section; 13 World Premiere screenings; and much more highlight the 5th annual Chicago International Movies & Music Festival (CIMMfest No. 5).  The four-day festival annually brings together filmmakers, musicians and devotees from around the world for a celebration of movies and music at various venues centered around Chicago’s Wicker Park and Logan Square neighborhoods, with a satellite location at the Music Box Theatre, Thursday, April 18 – Sunday, April 21.

More than 100 films from over 27 countries will be screened including features, documentaries, shorts, concert films, animation and music videos, all with music at their center. Playing a bigger role this year will be the live music component, including showcases by Bloodshot Records, Captcha Records and ASCAP; curated concerts, and innovative multimedia events, featuring Manual Cinema, Sister Spit, live film scoring, concerts by documentary film subjects and more.

“CIMMfest audiences will have the rare opportunity to experience first – and firsthand – an incredible range of movies and music.  We are thrilled to be producing our fifth festival showcasing amazing films and live performances, with much more live music alongside innovative crossover events,” said Josh Chicoine, CIMMfest Co-Director, with Ilko Davidov. “We are happy to bring satellite venues like The Hideout, The Burlington, the Music Box and the brand new Constellation to our main drag: Milwaukee Avenue from Wicker Park to Logan Square. CIMMfest is unique in that we truly aim to highlight the crossover of film and song, movies and music, past, present and future, in the best city on earth. Along with our board of directors, staff, partners, sponsors, friends and supporters, we are thrilled to be curating these amazing four days in April!”

● The Chicago Premiere of Big Star: Nothing Can Hurt Me (dirs. Drew DeNicola and Olivia Mori). The definitive documentary about the beloved and influential '70s rock band Big Star, showing at the Logan Theatre, Friday, April 19, features rare music, never-before-seen footage and in-depth interviews with the original band members, family, friends and artists they influenced.

● A selection of short films from the Sundance Film Festival include Datamosh, Black Metal and #PostModern, while films screened at SXSW include The Punk Syndrome, Downloaded, Necronomica, KRS ONE: Brooklyn to the Bronx and Killer Mike “Reagan.”

● A new Unreliable Narrations program offers films by and about musicians who refuse to conform, including the Chicago Premieres of The Mystery in Old Bathbath (dirs. Miss Pussycat and Quintron) by underground cult band Quintron; the documentary Human Skab (dirs. Frank Gunderson and Bret Woods), about the psychotic, hardcore punk rock blues band from Elma, Washington; and a number of notable short films to be announced.

● Chicago Premiere of In Search of Blind Joe Death – The Saga of John Fahey (dir. James Cullingham) at the Society for Arts, Friday, April 19. This feature documentary about tremendously influential composer, guitarist, author and provocateur John Fahey (1939-2001), features participation by Pete Townshend, Joey Burns of Calexico, Chris Funk of The Decemberists and many of Fahey's closest collaborators and friends, including renowned radio personality Barry Hansen, aka Dr. Demento.

CIMMCon
New this year is the launch of CIMMCon, a dynamic professional and entrepreneurial industry conference, presented in association with Columbia College Chicago and the Engineering and Recording Society of Chicago (EARS).  CIMMCon will offer, at no charge, compelling presentations from industry professionals, film icons, artist entrepreneurs and music makers, including Keynote Speaker Martin Atkins (Ministry, Nine Inch Nails, Public image Limited, Killing Joke) renowned for his candor regarding the music business.   More information on CIMMCon programming will be announced shortly.

A recent Driehaus Foundation Grant winner, CIMMfest is a Non-profit 501(c)3 organization.  For information on how to get involved, visit www.CIMMfest.org.

ABOUT CIMMFEST
The mission of the Chicago International Movies & Music Festival (CIMMfest) is to highlight the inseparability of film and music through the production of an annual four-day, multi-venue festival. CIMMfest is a convergence event that highlights the interconnectedness of all people shown through the lens of music and movies, on stage and on screen.  All participating films have music at their center: short and long form documentaries and narrative fiction; concert films; animation; music videos; performances; live concert events; art exhibits; and panel discussions, presented at both new and historic venues around Chicago.  CIMMfest is a platform for filmmakers and musicians, artists and producers, to present their vision and offer a connection point for people to come together for a celebration of movies, music and good times in the greatest city on earth – Chicago!  For more information, visit www.CIMMfest.org.