THE DRAG SEED Via Hell in a Handbag Productions to Play February 24 – March 20, 2022 at The Chopin Theatre

Hell in a Handbag Productions Presents 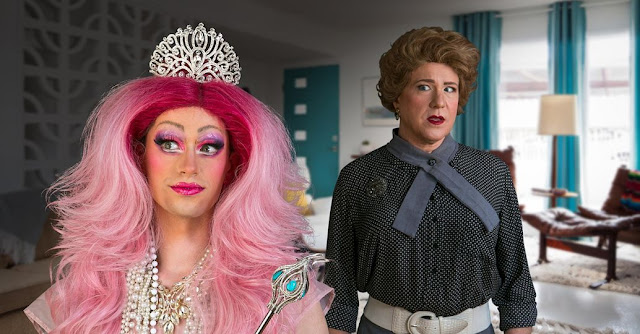 Plus a Limited Engagement at New York’s

Here at ChiIL Live Shows we adored this camp classic the last time around, and can't wait to see the revival run. I'll be out to catch this one March 3rd, so check back soon for my full review. Hell in a Handbag Productions is pleased to continue its 20th anniversary season with a revival of its popular comedy The Drag Seed, an unauthorized parody of the 1956 psychological horror-thriller film The Bad Seed. Written by Artistic Director David Cerda* and directed by Cheryl Snodgrass, The Drag Seed will play February 24 – March 20, 2022 at The Chopin Downstairs Theatre, 1543 W. Division St. in Chicago’s Wicker Park neighborhood. Tickets are currently available at handbagproductions.org and thedragseed.eventbrite.com.

Please note: Handbag will require proof of full vaccination and masking at all performances. The entire cast and crew is fully vaccinated and tested regularly.

Carson (Patrick O’Keefe) is a perfect little boy who likes to dress like the perfect little girl and they’re deadly serious about crowns and pronouns. Carson’s mother, Connie (Ed Jones), loves and accepts Carson but wishes Carson wasn’t so competitive. Carson always gets what they want, and they really want to win the drag pageant at their very progressive school – The Josephine Baker Rainbow Academy for Gifted Students. When Carson loses to Summer Breeze, they vow to get that crown – one way or another…

Tickets: $27 advanced general admission, $32 at the door, $50 VIP/reserved seating with drink ticket. Group rates $25 for 10 or more. Tickets are currently available at  handbagproductions.org and thedragseed.eventbrite.com.

David Cerda (Playwright) is a founding member and Artistic Director of Hell in a Handbag Productions, now celebrating its 20th year anniversary. As resident playwright, he has written many Handbag productions as well as acted in them. His Golden Girls Lost Episodes parody shows have been produced around the country and will be featured in Golden Con in Chicago, the world’s first fan convention dedicated to all things Golden Girls at Navy Pier. As a Latinx queer individual, he is a proud inductee into the Chicago LGBT Hall of Fame and recipient of a Jeff Award for lifetime achievement for his 25 years (and counting) of work and service to the community. He lives in Chicago with his partner, Christopher.

Cheryl Snodgrass (Director) works regularly with Hell in a Handbag. Productions include Die, Mommie! Die!, Scarrie: The Musical, L’Imitation of Life and The Birds. She has performed with Handbag in Caged Dames and The Birds, and has assisted David Cerda in developing a number of scripts. Cheryl has worked with playwright Jeff Goode directing the premiere productions of Poona the F*ckdog and Other Plays for Children, The Emancipation of Alabaster McGill and The Eight: Reindeer Monologues among others. She directed To the New Girl and Hoist for Foundlings, as well as Shadows of Birds and Lighthouses in the Desert with Glass Apple. Cheryl most recently returned from Bangor, ME after directing Who’s Holiday. Next up is the world premiere of Handbag’s A Fine Feathered Murder: A Miss Marbled Mystery.

Hell in a Handbag is dedicated to the preservation, exploration, and celebration of works ingrained in the realm of popular culture via theatrical productions through parody, music and homage. Handbag is a 501(c)(3) Not for Profit. For additional information, visit  handbagproductions.org.

Posted by Bonnie Kenaz-Mara at 3:07 PM No comments: