ACT OUT OPENING: Anything Goes at Cadillac Palace #BroadwayinChicago

ChiIL Live Shows will be there for opening night tonight and we'll have a full review up shortly.    Click here for discount tickets through Goldstar. 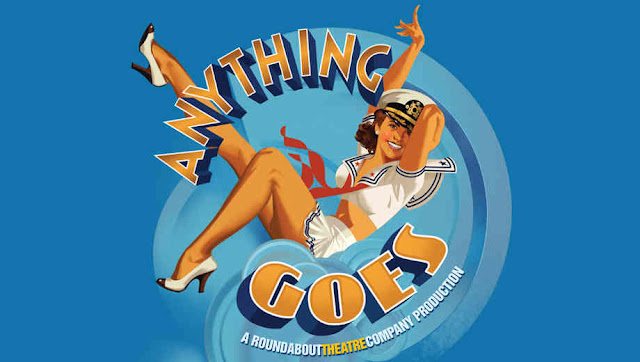 
"ALL ABOARD for this saucy and splendid production of Roundabout Theatre Company's ANYTHING GOES, winner of three 2011 Tony Awards® including Best Musical Revival and Choreography! One of the greatest musicals in theater history, Cole Porter's first-class musical comedy is sailing to Chicago, starring critically-acclaimed actress Rachel York as Reno Sweeney and directed and choreographed by Tony Award® winner Kathleen Marshall. The New York Times calls it "Musical-Comedy Joy" and USA Today hails it as "Glorious and Exhuberant!" When the S.S. American heads out to sea, etiquette and convention get tossed out the portholes as two unlikely pairs set off on the course to true love?proving that sometimes destiny needs a little help from a crew of singing sailors, an exotic disguise and some good old-fashioned blackmail. Peppering this timeless classic are some of musical theatre's most memorable standards, including "I Get A Kick Out Of You," "You're the Top," and of course, "Anything Goes." Don't miss what the AP exclaims as, "So Delightful, So Delicious, So De-Lovely!"

Packed with memorable tunes, Cole Porter's Anything Goes has embarked on a national tour following its Tony-winning Broadway revival in 2011. The timeless tale of boy-meets-girl -- and the roller coaster ride that follows -- showcases Porter's signature wit and masterful composition with songs like "I Get a Kick Out of You" and "You're the Top." The show centers on Billy Crocker (Erich Bergen), who's hopelessly in love with a wealthy heiress. When he sees her boarding a boat to London, he throws caution to the wind and becomes a stowaway. Madcap hijinks ensue when his fellow passengers, including sexy evangelist-turned-nightclub-singer Reno Sweeney (played by Broadway vet Rachel York) and second-rate gangster Moonface Martin (Fred Applegate of Sister Act and Young Frankenstein), decide to help Billy win his true love.

Posted by Bonnie Kenaz-Mara at 3:04 PM No comments: