We've seen Blue Man Group numerous times over the years and they blew my mind (or should I say "blue") every time!  This is one of our favorite long running shows here at ChiIL Live Shows and a shoe in for ChiIL Mama's ChiIL Picks List. 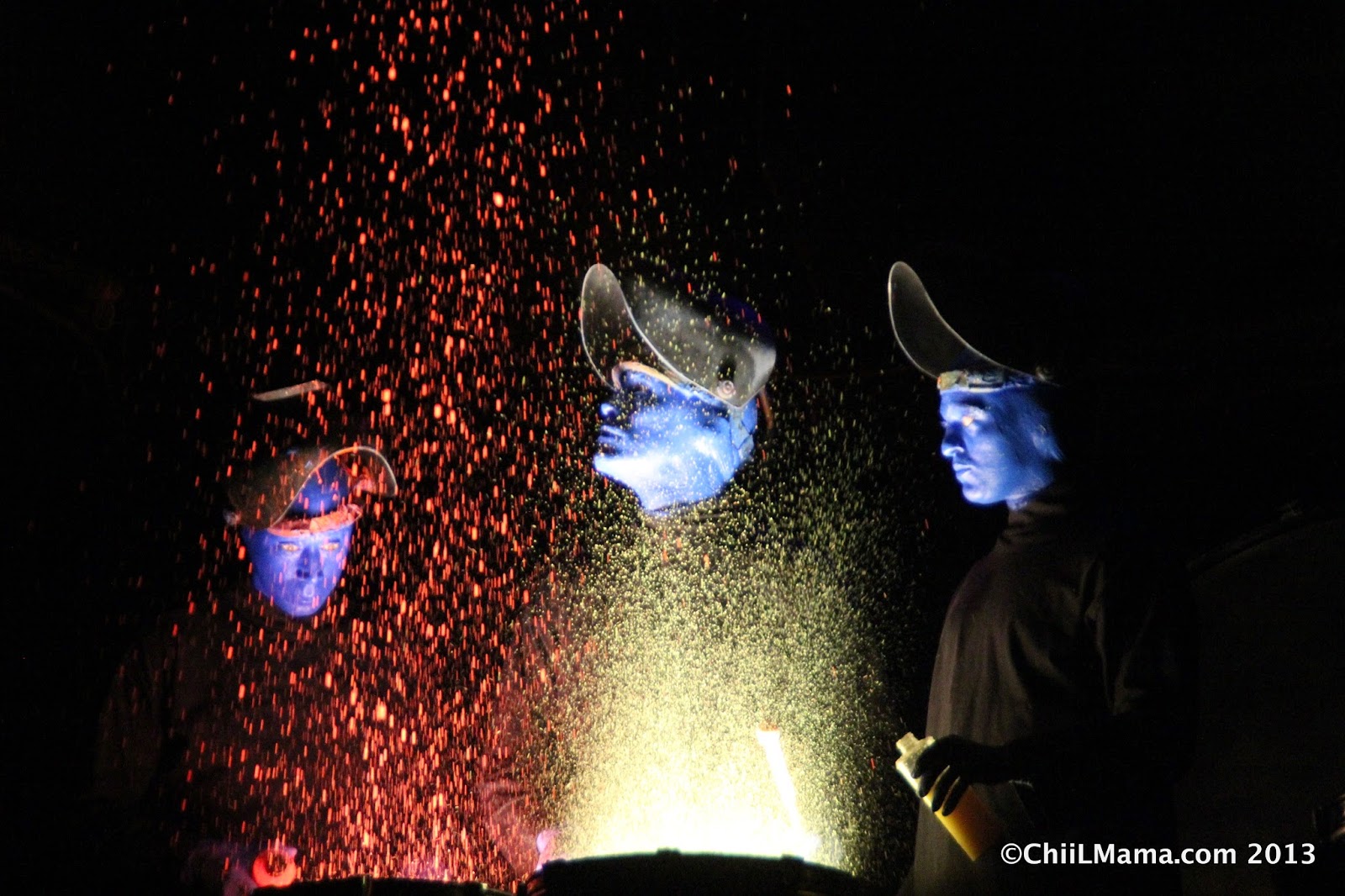 We just went again last Friday with 3 generations of our family!  We've all been before but it's been a while. My kids caught them with me back in 2011, when they first updated the show and again in 2012 with their team mates from CircEsteem.  My parents haven't seen them in even longer than that.


Blue Man Group merges super human feats, music, art and biting social commentary into one hilarious, dance party of a show.  And drumming... lots of paint filled drumming. This is must see theatre for sure. 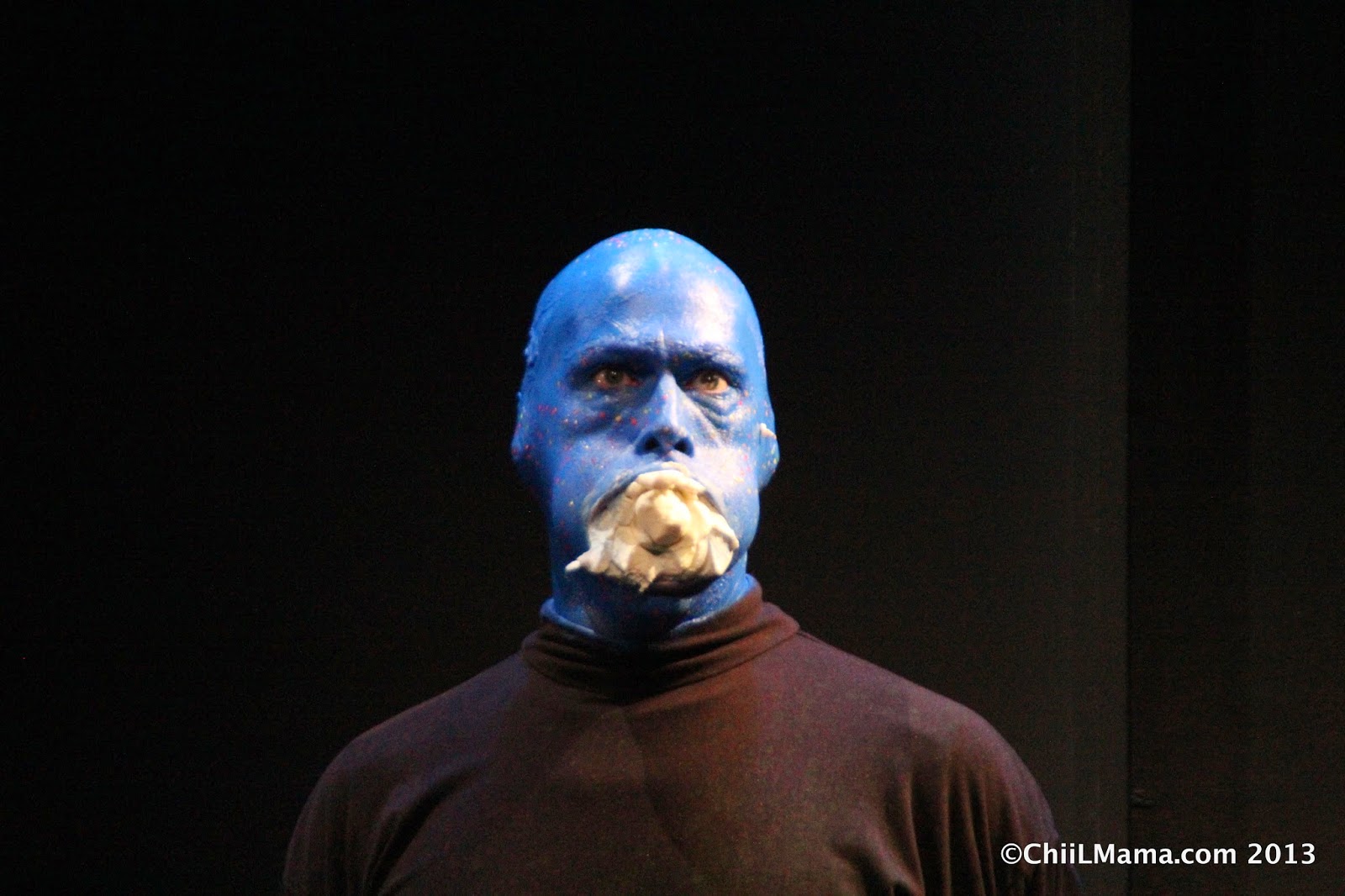 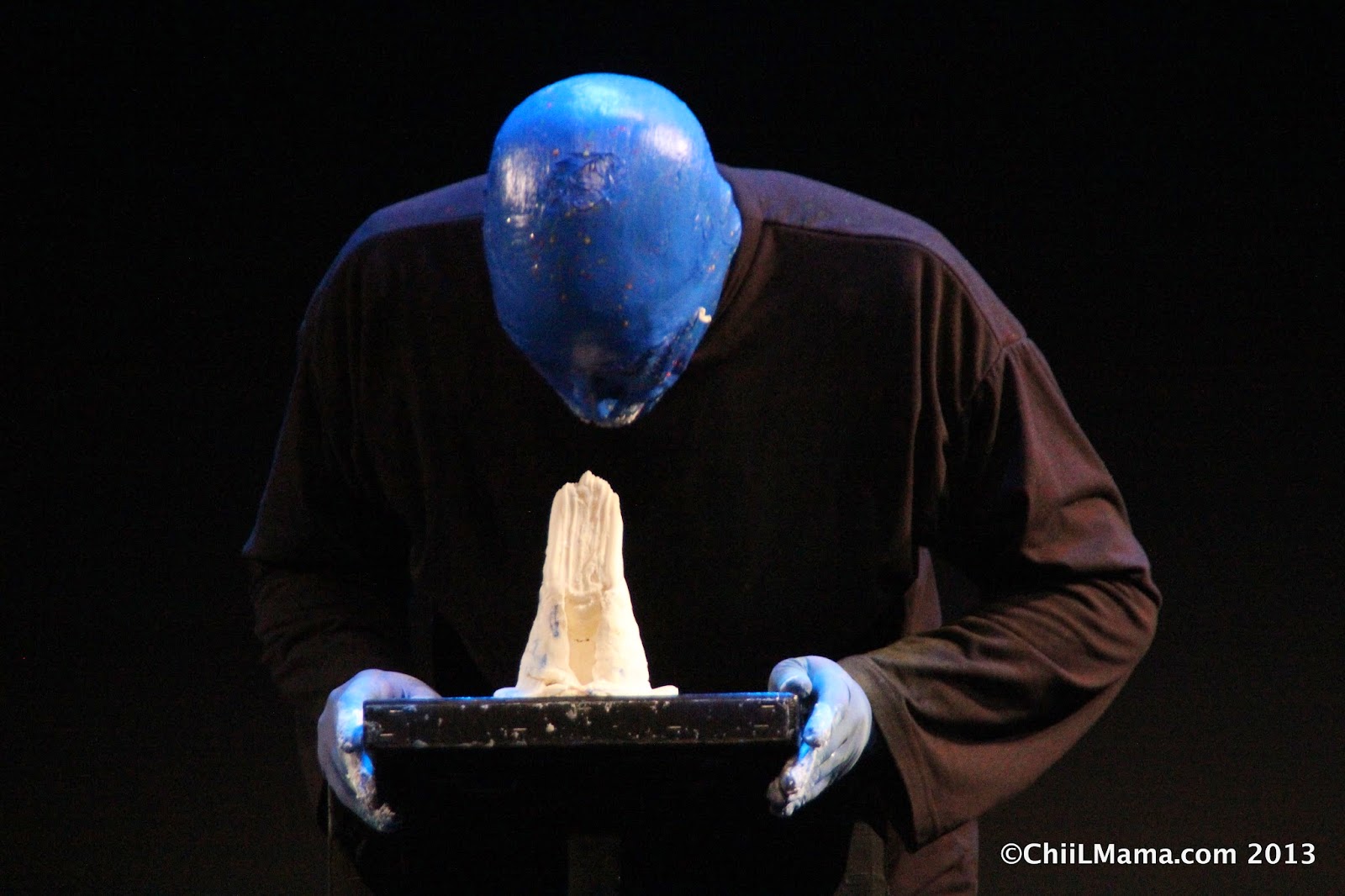 I saw them the most recently, at a special press unveiling for their outdoor art works last June.  Check out our original photos and videos from that day. They had an art contest to enhance the exterior of their Briar Street home, and many of the winning artists were present to see their works unveiled. 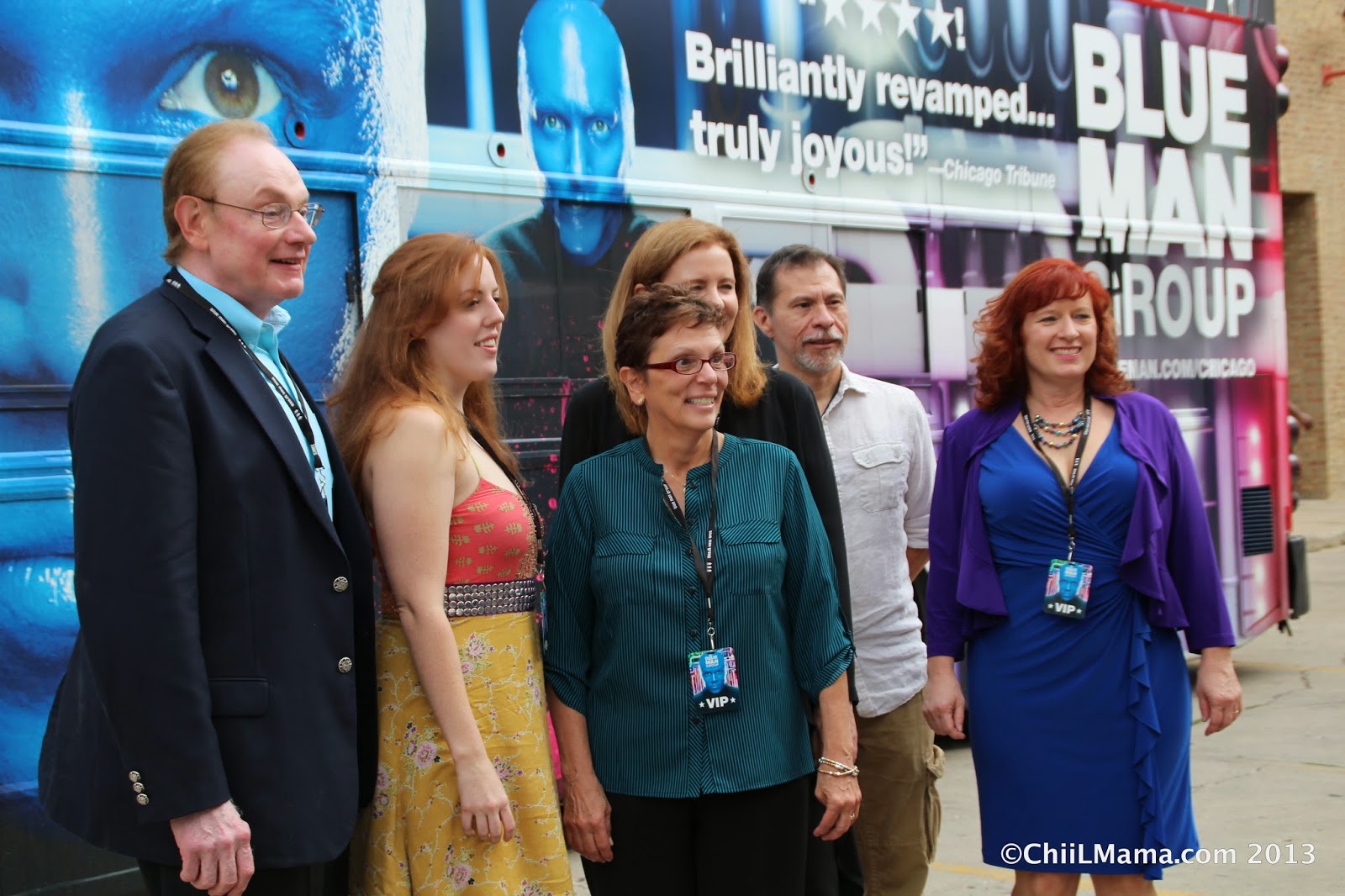 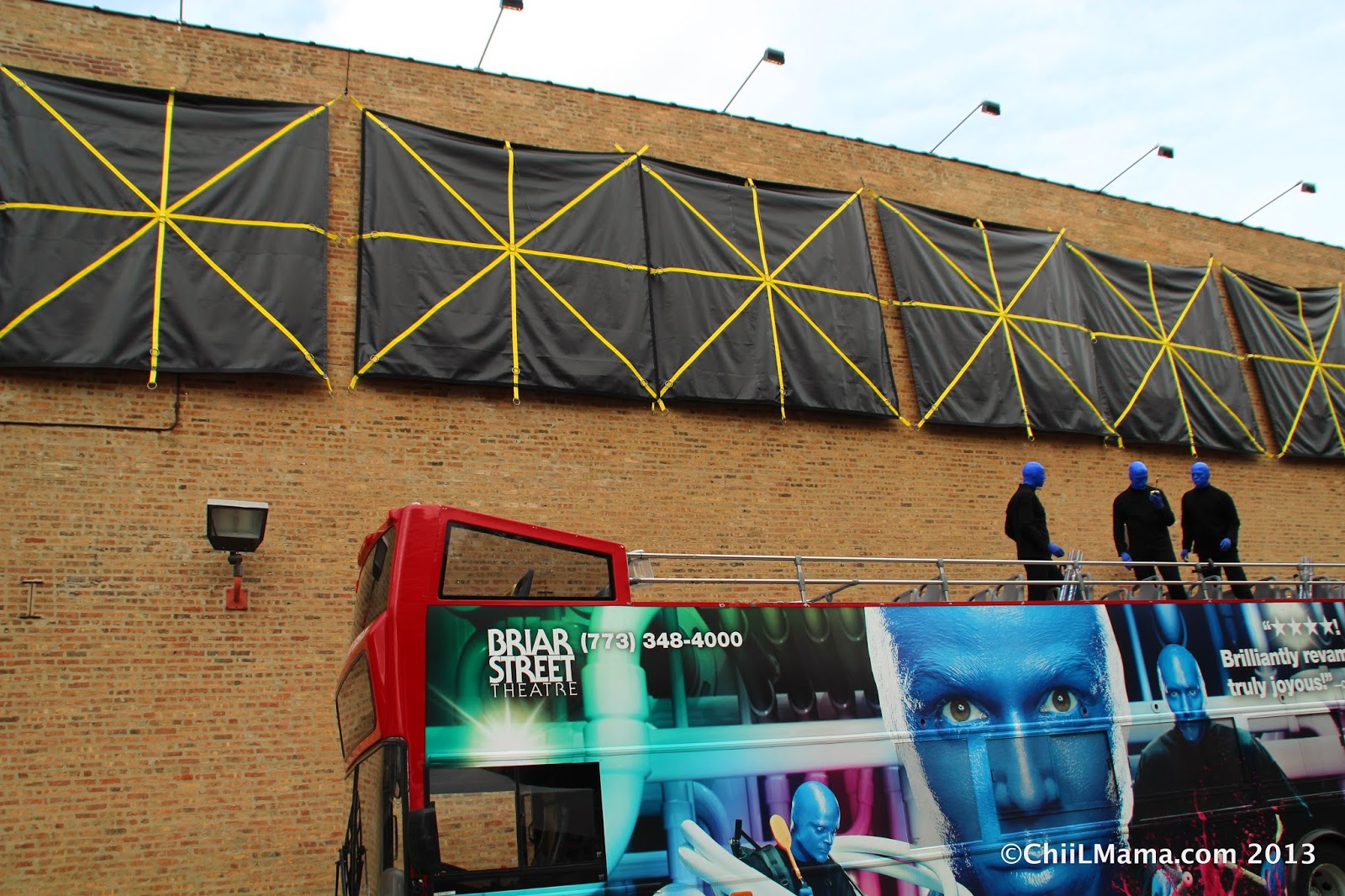 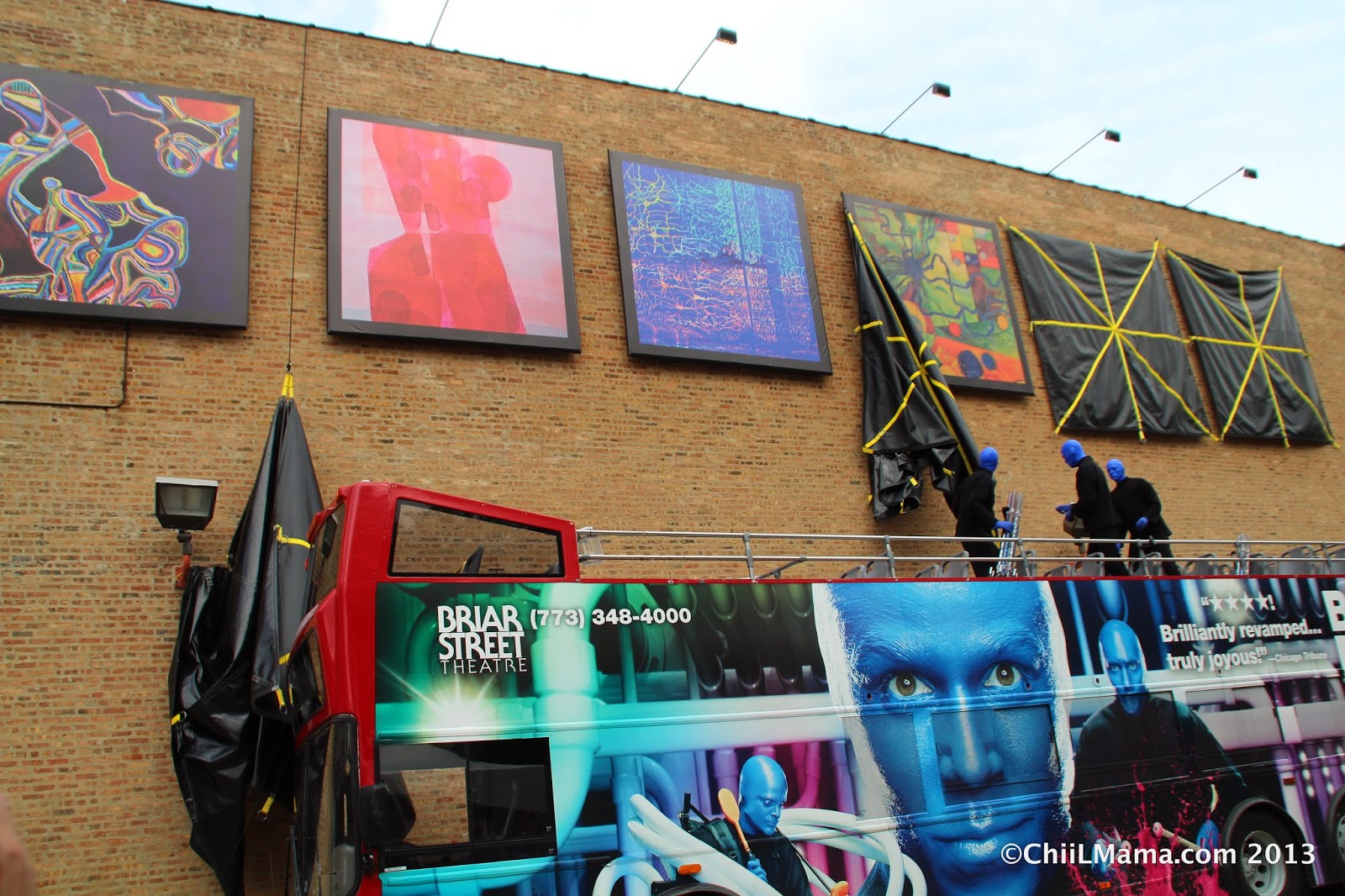 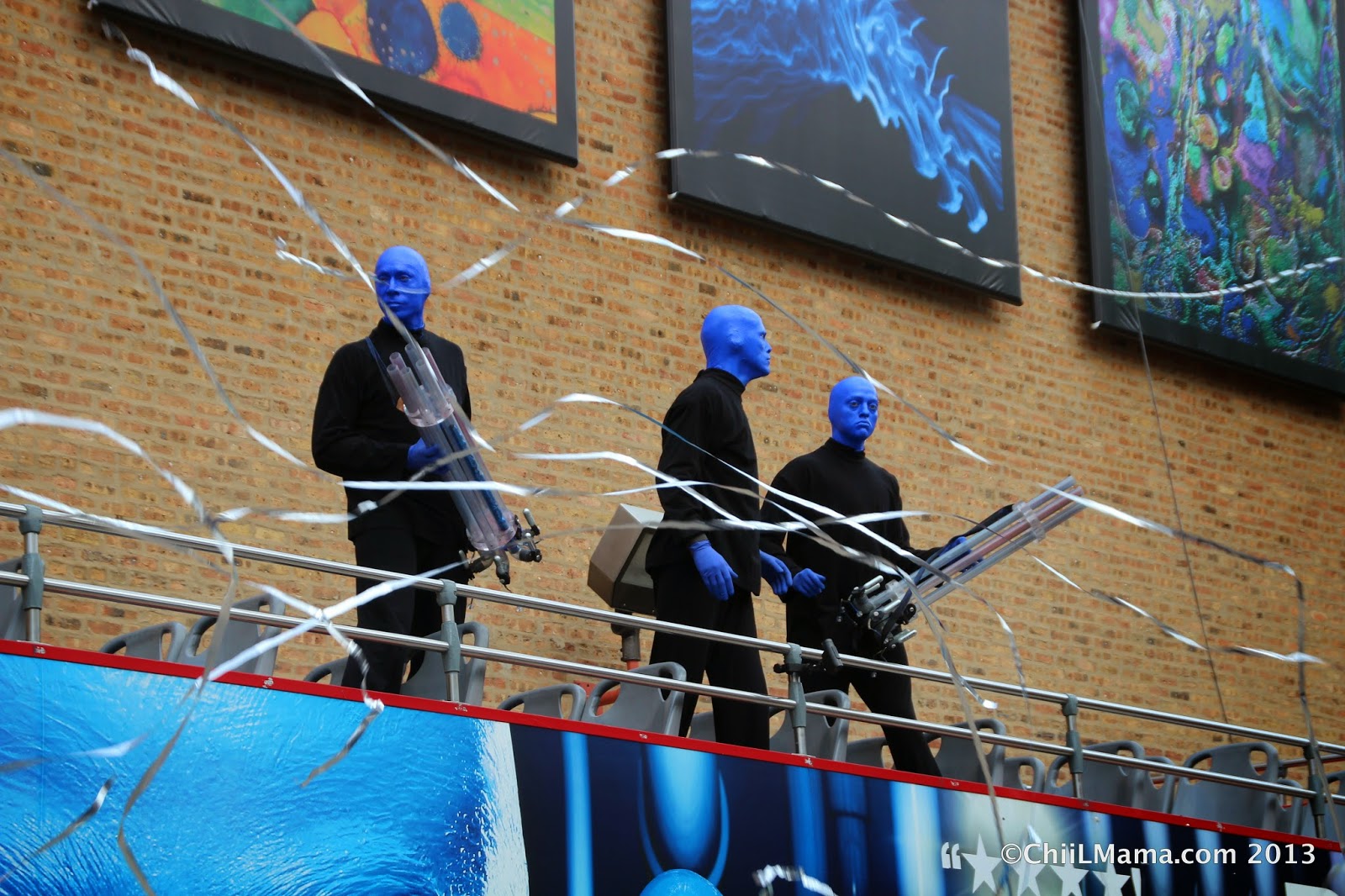 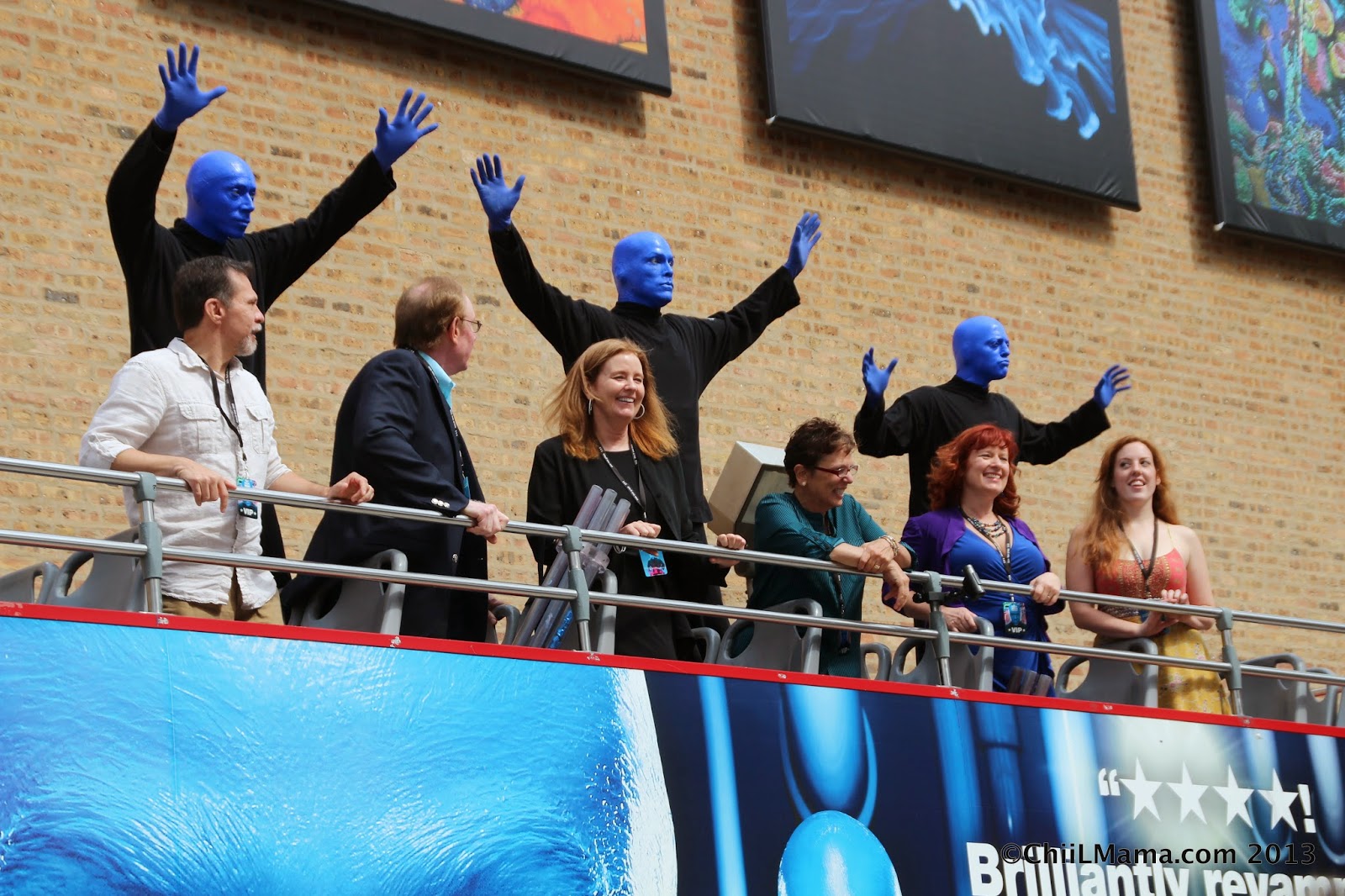 Check out ChiIL Mama's full slideshow here. Our favorites are embedded below.  We couldn't shoot this past week, so here's our Blue Man blast from the recent past instead.


The kids at the press conference were invited from Hawthorne School in the neighborhood and they walked over. Blue Man Group is great about partnering up with their neighbors, doing philanthropy, and supporting theatre access for kids (like the free block of tickets they gave to CircEsteem). 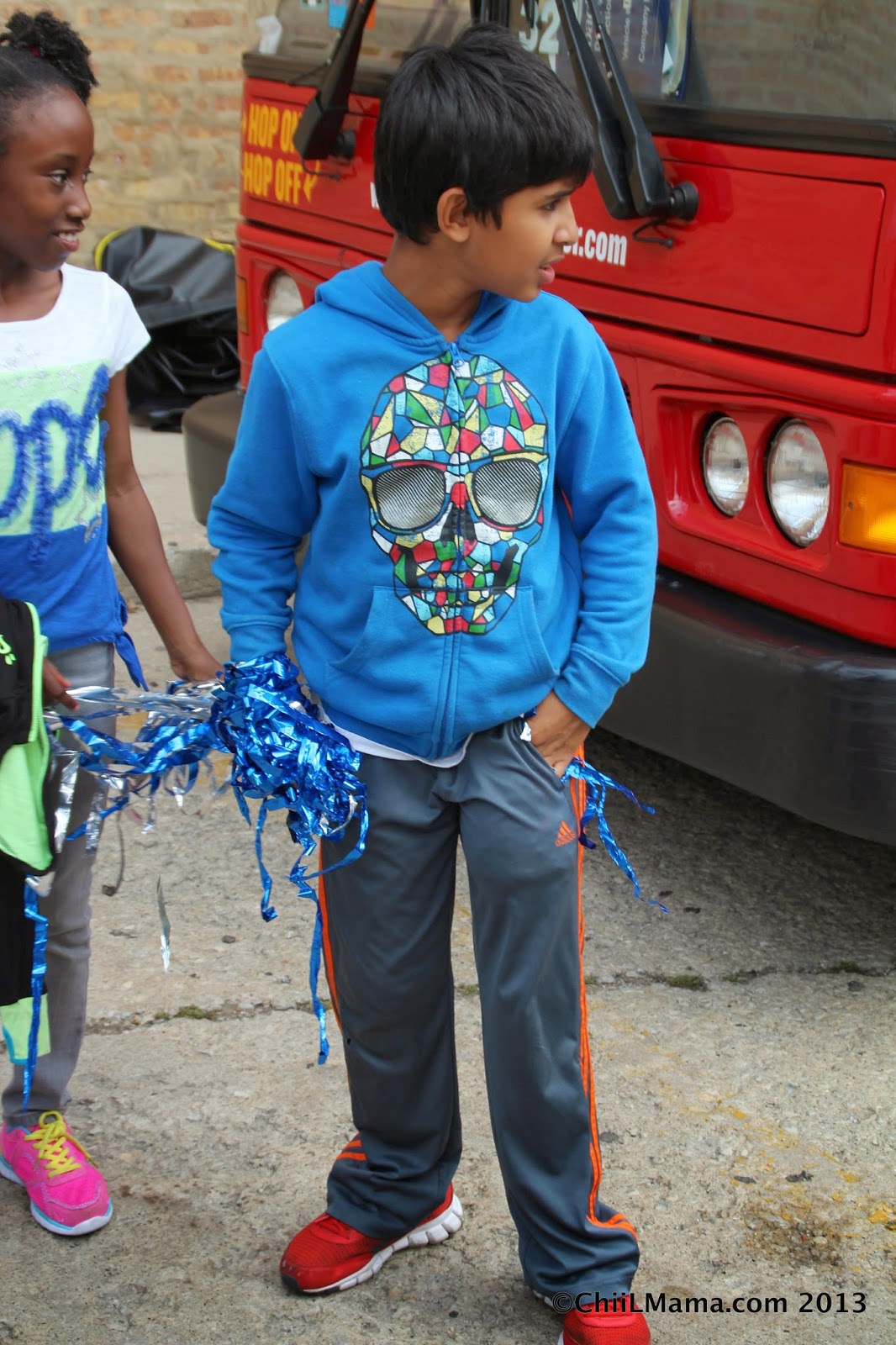 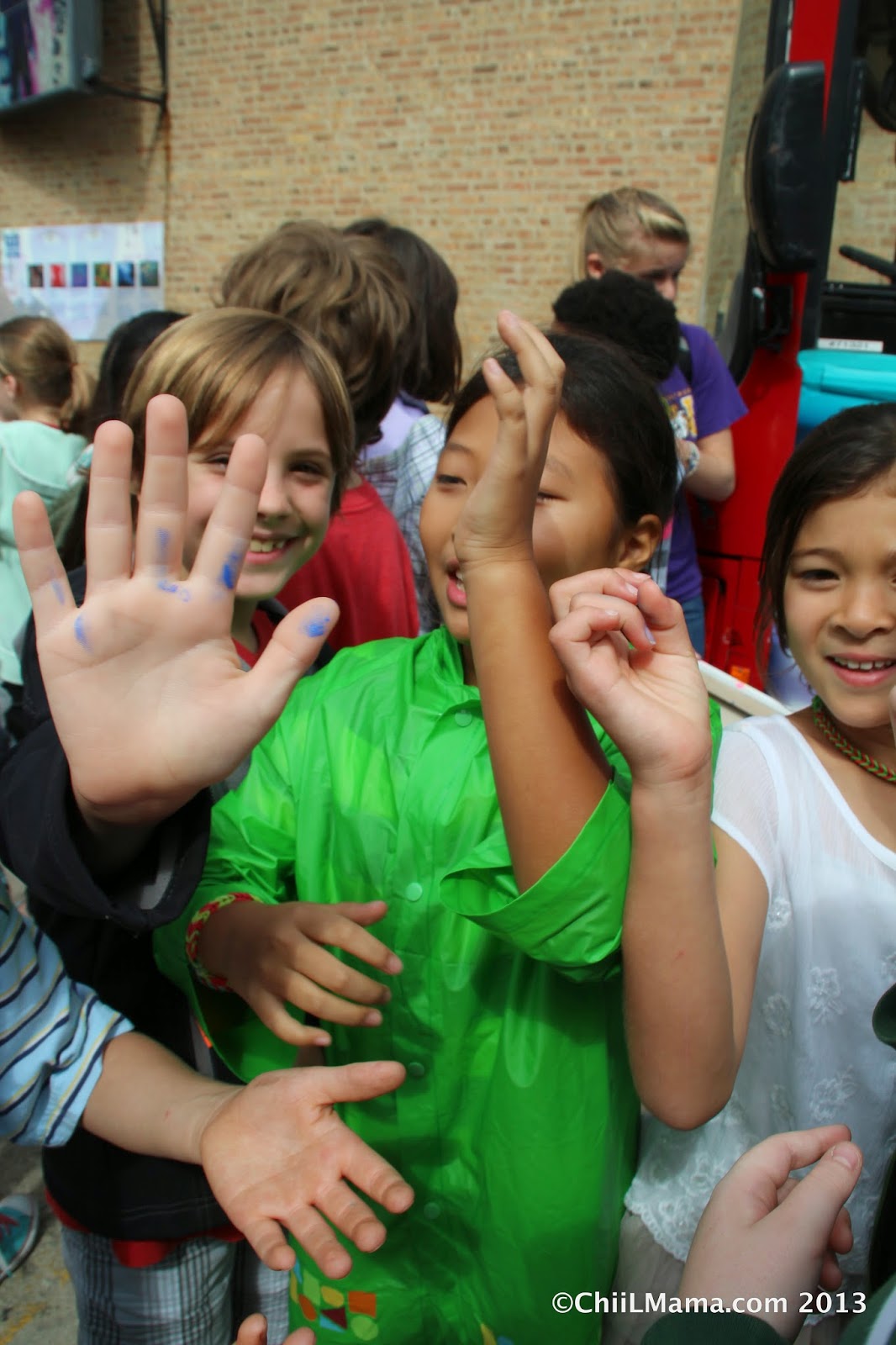 Lucky enough to live in a town with Blue Man Group shows in residence? Then GO already. Don't worry though... We won't call it a staycation if you don't plan to get outta dodge for spring break. We detest the word "staycation" and will never use it unless in jest.  Staycation can just die already.  Blue Man Group, however, lives on!  Come check out the funniest cobalt drummers in the universe and their Gi-Pads, quirky art, and more! 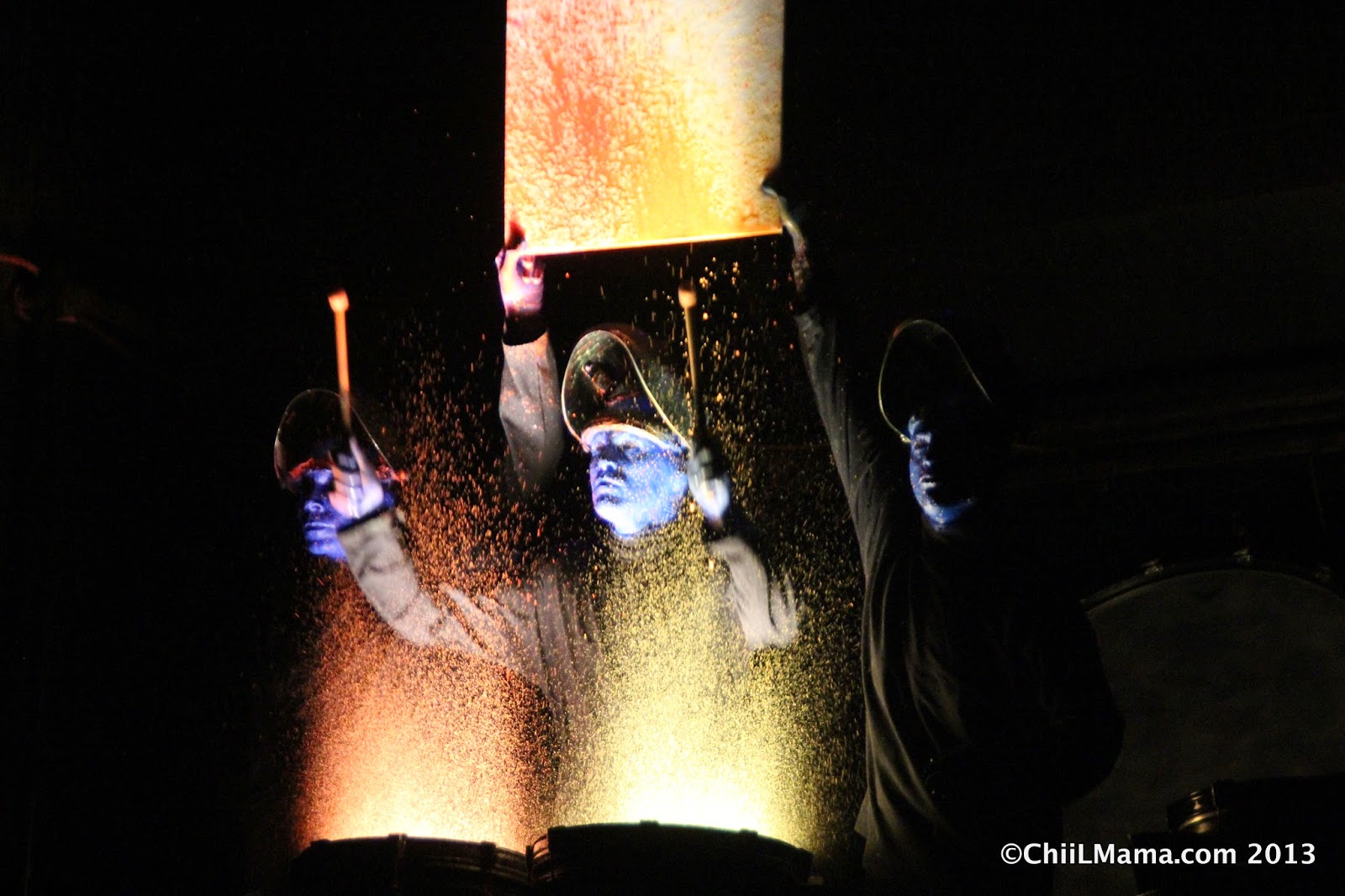 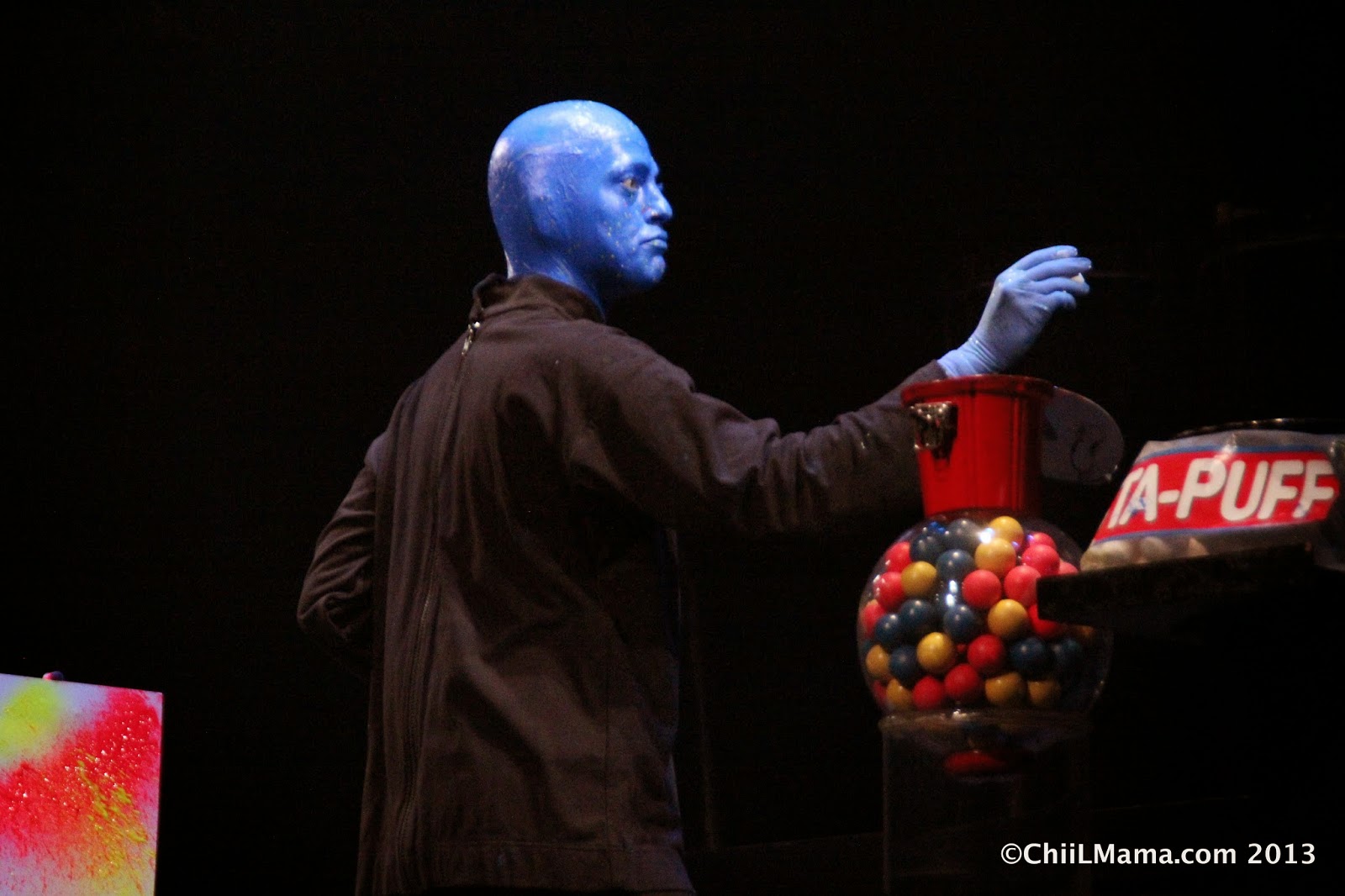 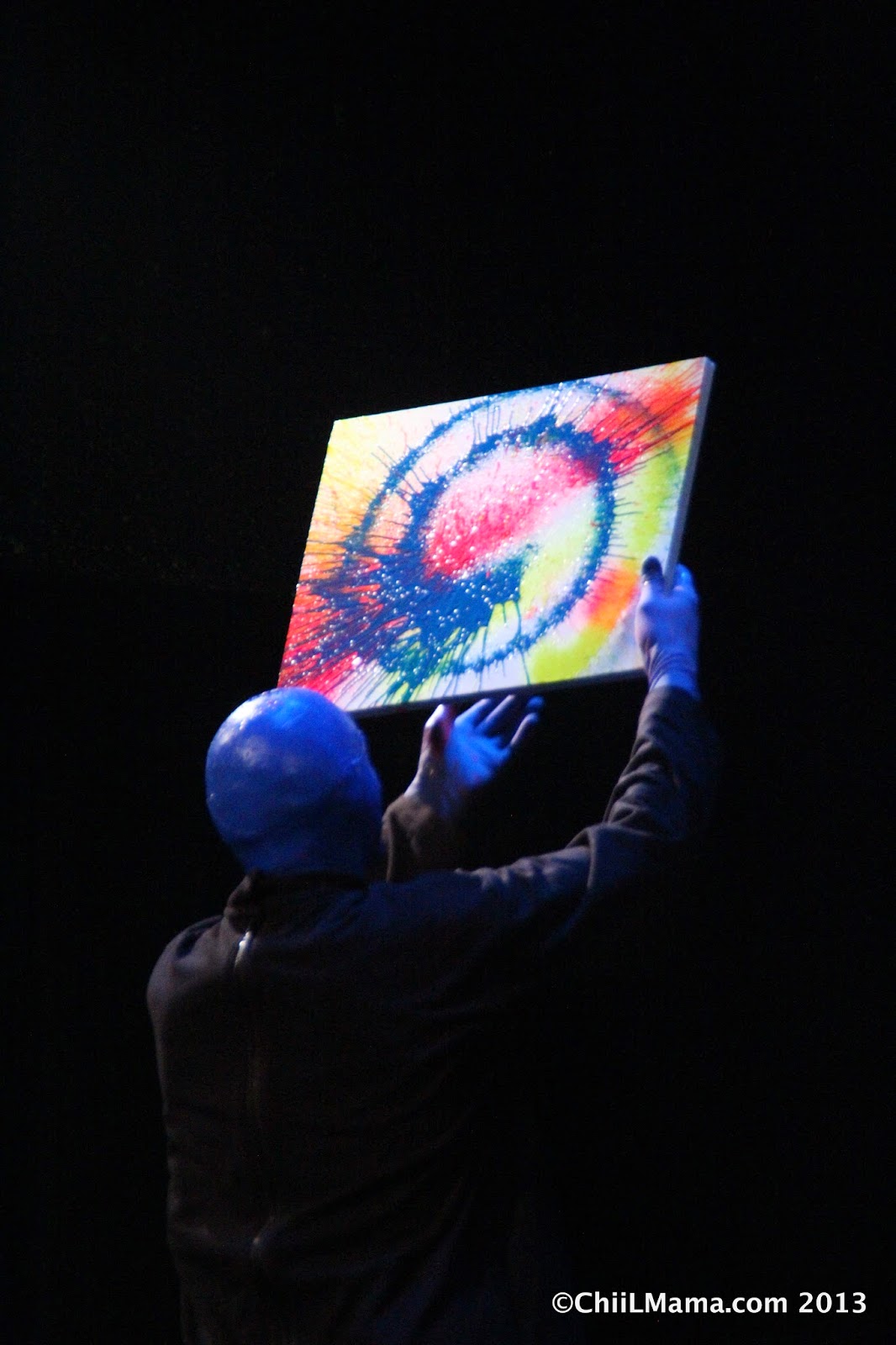 Sometimes it's easy to get complacent about the long running shows here at home, and just assume they'll be around for years, and you have plenty of time to go. But there's no time like the present. People do travel in from miles around, and even other countries to check out Chicago's world class theatre scene. So there's no excuse. If you don't live in Chicago, come on over.  You'll be glad you did!

Click here for some of ChiIL Mama's past photo filled features on Blue Man Group.

The critically hailed theatrical phenomenon Blue Man Group at Chicago’s Briar Street Theatre (3133 N. Halsted Street) will be adding performances to the spring calendar for Spring Breakers looking to escape the ordinary this year.
For Spring Break groups of 15 or more, special pricing will also be available. The additional performances have been added in March and April 2014, to give students and families the opportunity to see the critically-acclaimed theatrical production that combines heart-pounding music, hysterical comedy stunts and state of the art technology. For Spring Breakers looking to enhance their experience, Blue Man Group is partnering with Chicago-area attractions to create fun and exciting packages highlighting the city, all available through the show’s website www.blueman.com/chicago/about-show. 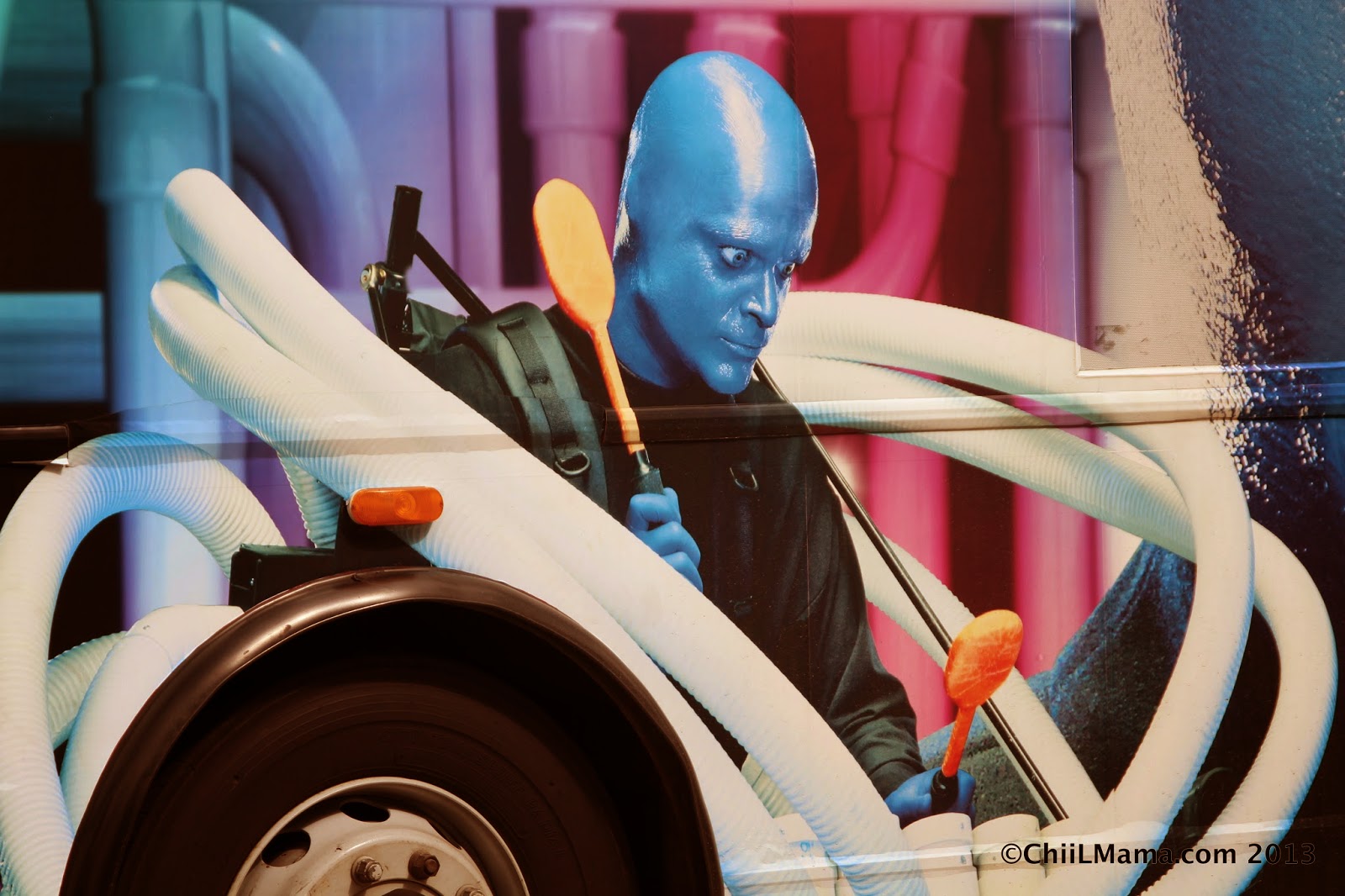 *The John Hancock Package pairs tickets to a Blue Man Group performance with a day at the John Hancock Observatory where visitors can enjoy the open-air skywalk, a cafe and one of the most beautiful views of Chicago and Lake Michigan.

For a one-of-a-kind tour of the city, audience members who purchase their Blue Man Group tickets online, can save 10% on 1-day or 3-day Chicago Trolley and Double Decker Co. tickets. For those looking for a thrill, the Skydeck Package gives audiences the chance to experience a Blue Man Group performance and visit Chicago’s Willis Tower’s Skydeck. At the Skydeck, visitors can step outside the tallest building in the western hemisphere and onto one of the Ledge’s glass boxes that extend out 4.3 feet from Skydeck at 1,353 feet in the air. 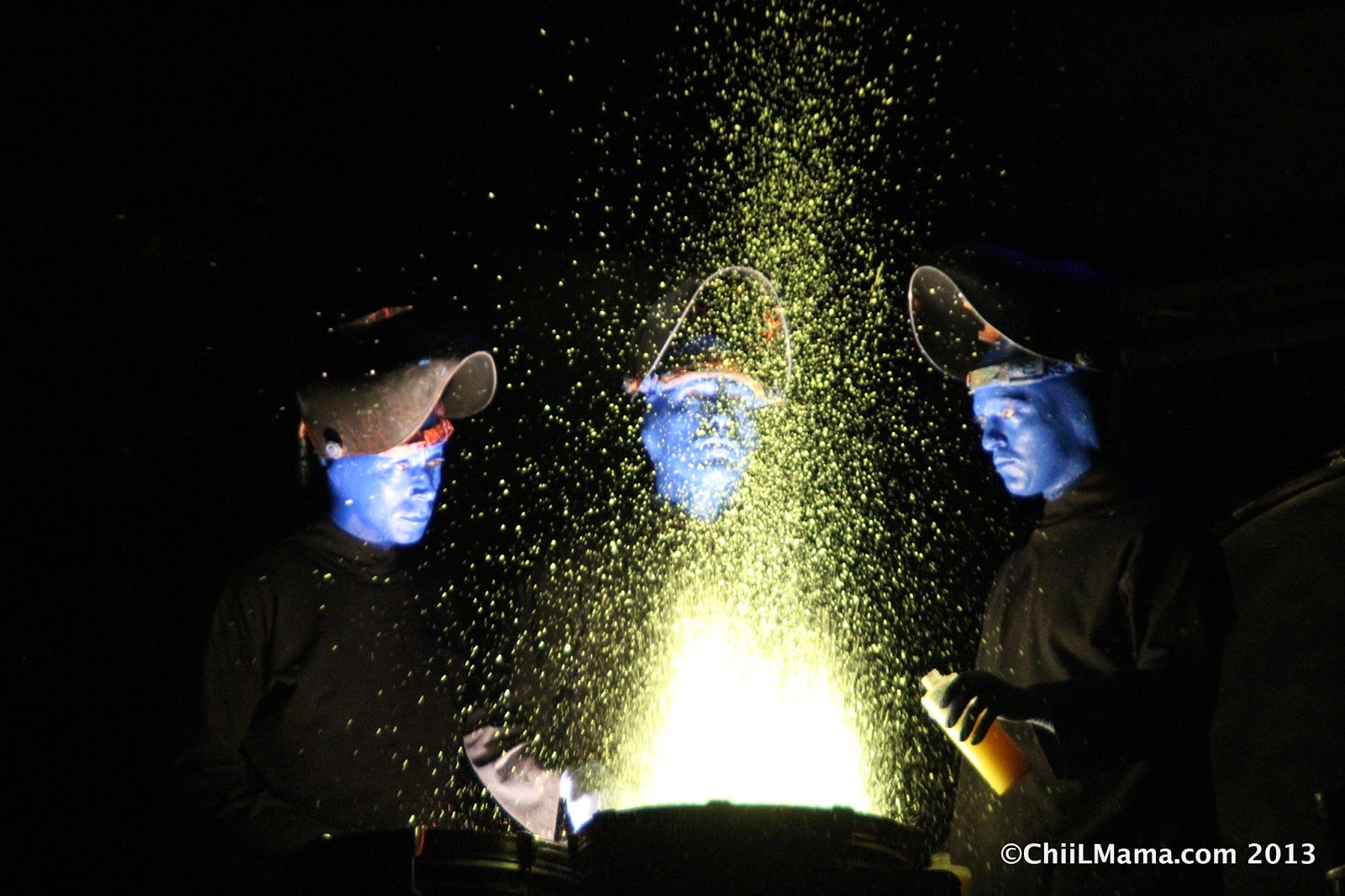 *For Spring Breakers looking for the “Ultimate Theater Package” Blue Man Group has created an experience which includes: Two tickets to Blue Man Group, an overnight stay at the Hampton Inn and Suites River North, free breakfast and a gift card to Jack's on Halsted for a delicious dinner for two. For more information and pricing on special packages please visit: www.blueman.com/chicago/discount-offers or call the box at: (773) 348-4000.


BLUE MAN GROUP TICKET INFORMATION   Tickets are available from $49-$99. Tickets may be purchased at the Briar Street Theatre by calling the box office at (773) 348-4000; by calling Ticketmaster at (800) 982-2787; at all Ticketmaster ticket centers or via the Internet at www.ticketmaster.com/bluemanchicago.  For more information, visit www.blueman.com/chicago.

About Blue Man Group Blue Man Group is a unique and thrilling multi-sensory experience that fuses innovative theatrical spectacle and powerful original music with hilarious comedy to create a performance experience unlike any other. The iconic, silent, inquisitive Blue Man character has remained consistent since the show’s opening, but the world he reacts to is continuously changing, allowing for a production that continuously evolves. One of the world’s most popular theatrical productions, today’s Blue Man Group is a blend of signature material that has been in the show since the opening, as well as newer passages that examine the influence of technology on today’s world with a funny and perceptive look at contemporary communication vehicles. The performance then closes with a pulsating finale that has audiences up and out of their seats, featuring an original Blue Man Group music score. Chris Jones from the Chicago Tribune gave the show a Four Star rating and said the material was “brilliantly revamped” and “truly joyous.” After seeing the new material, Hedy Weiss for the Chicago Sun-Times wrote, “The show's creators have cleverly updated the production with new wizardry while retaining its essential mind-set.” Chicago Parent editor Tamara L. O'Shaughnessy said “the coolest blue guys in Chicago just got cooler.” Currently, Blue Man Group theatrical shows can be seen in New York, Boston, Chicago, Las Vegas, Orlando, Berlin and on tour throughout the U.S. Blue Man Group can also be seen onboard the Norwegian Epic by Norwegian Cruise Line – the Official Cruise Line of Blue Man Group. The company’s music, featuring custom made instruments and signature, percussive sound, can be heard on five albums, including the Grammy-nominated “Audio,” as well as various film and television projects. As the company grows, it remains true to its vision of providing exciting experiences in a variety of media, appealing to a broad range of age groups and cultural backgrounds. 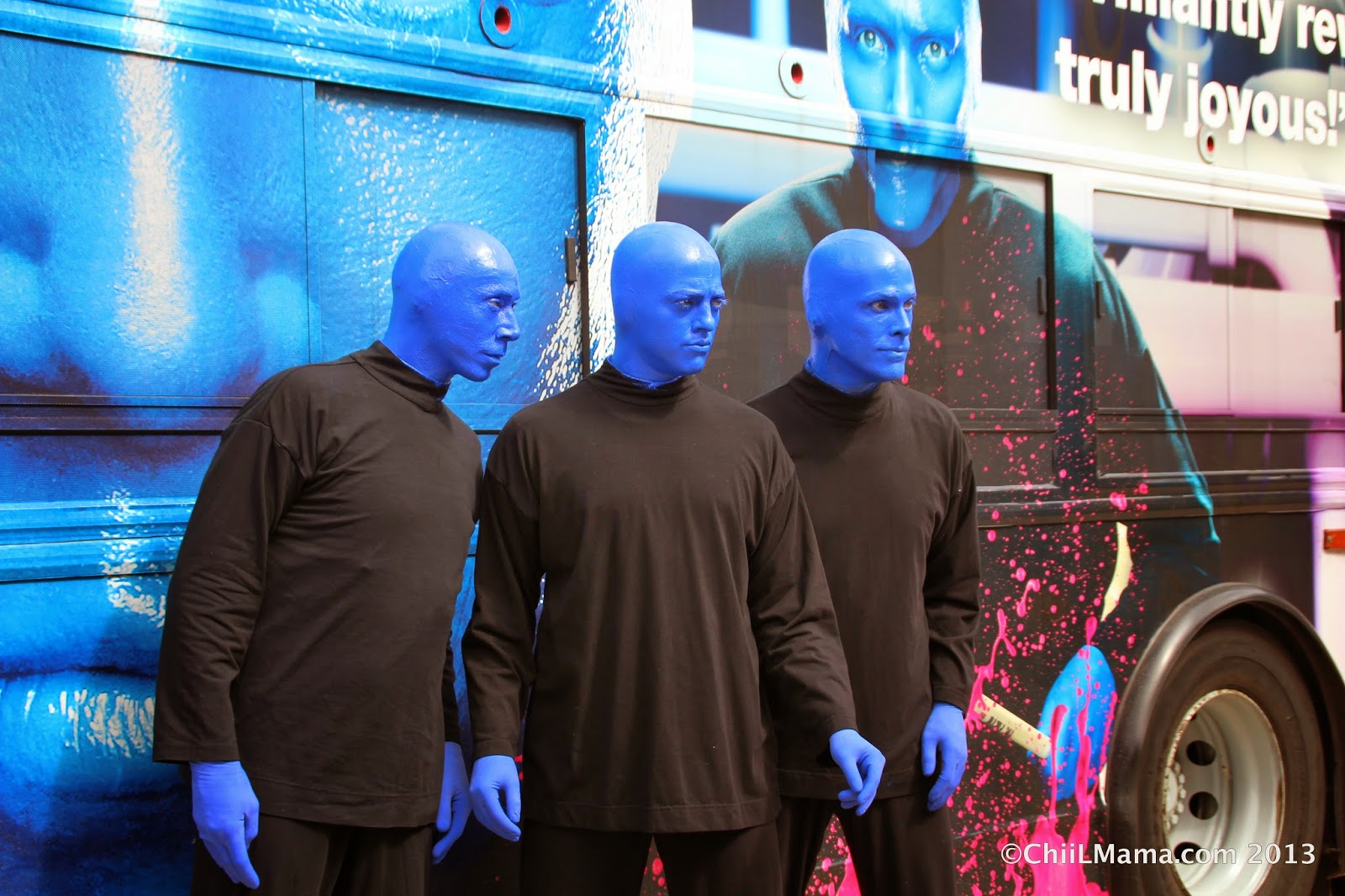 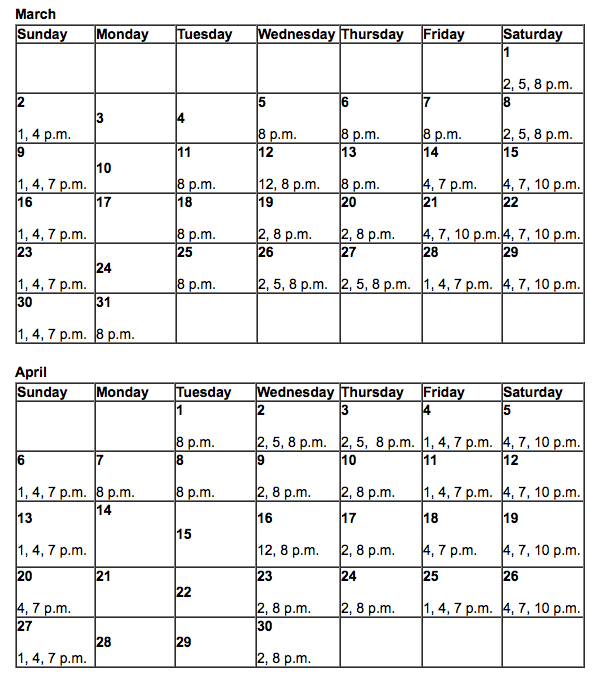 Check back like we vote in Chi, IL... early and often. We'll have video interviews, the kids' reviews and more Blue Man stills up shortly. 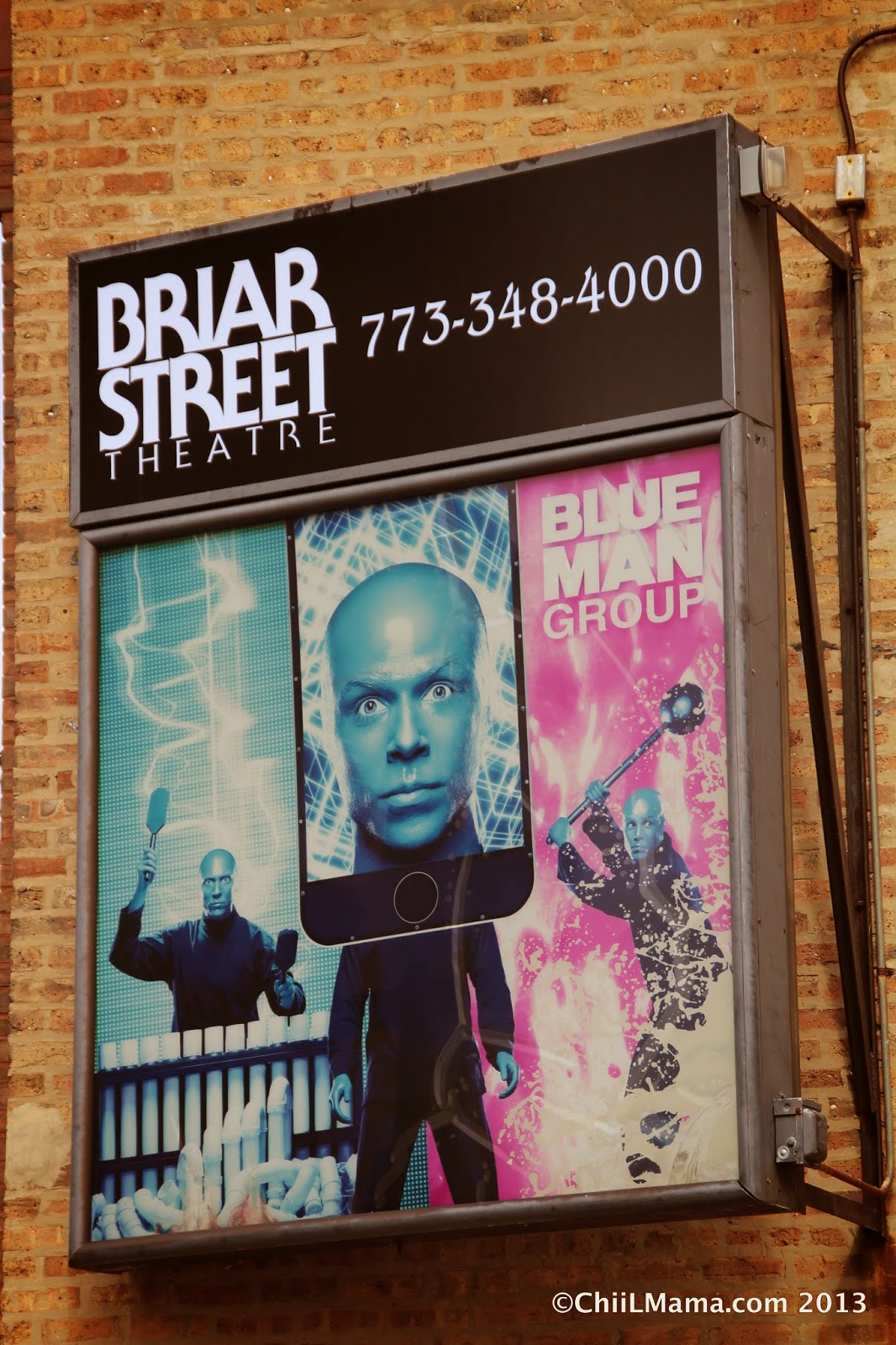 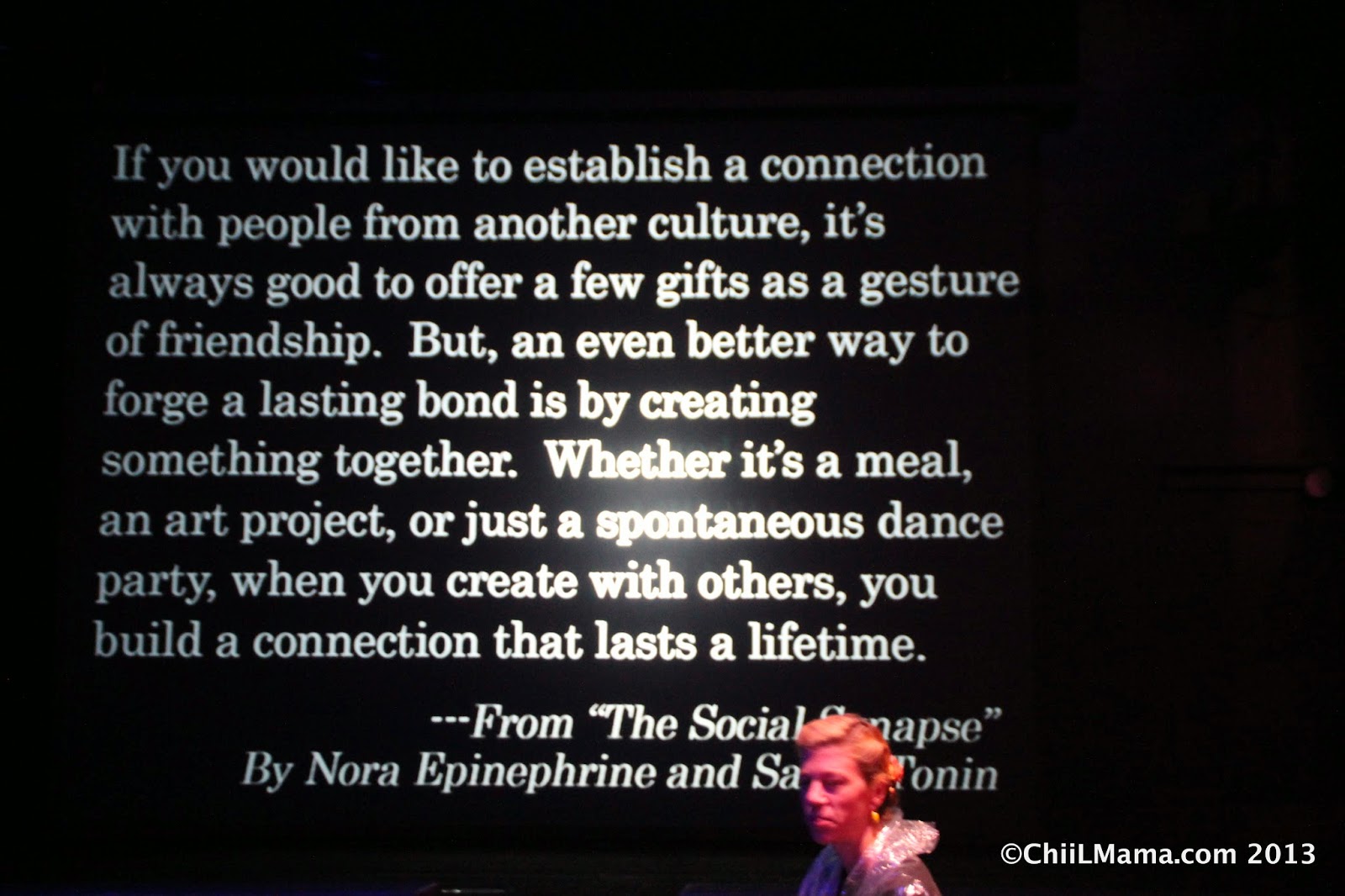 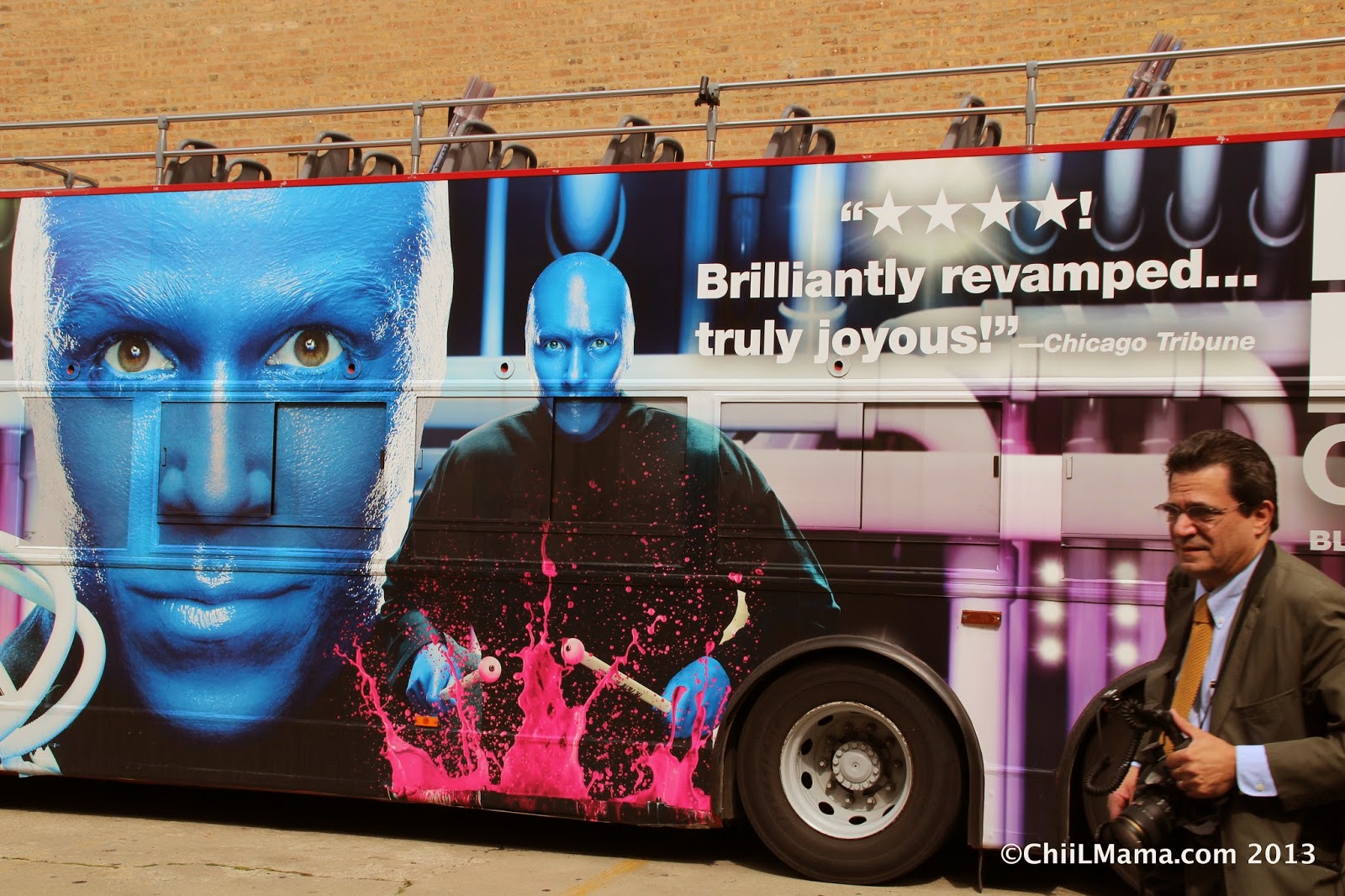 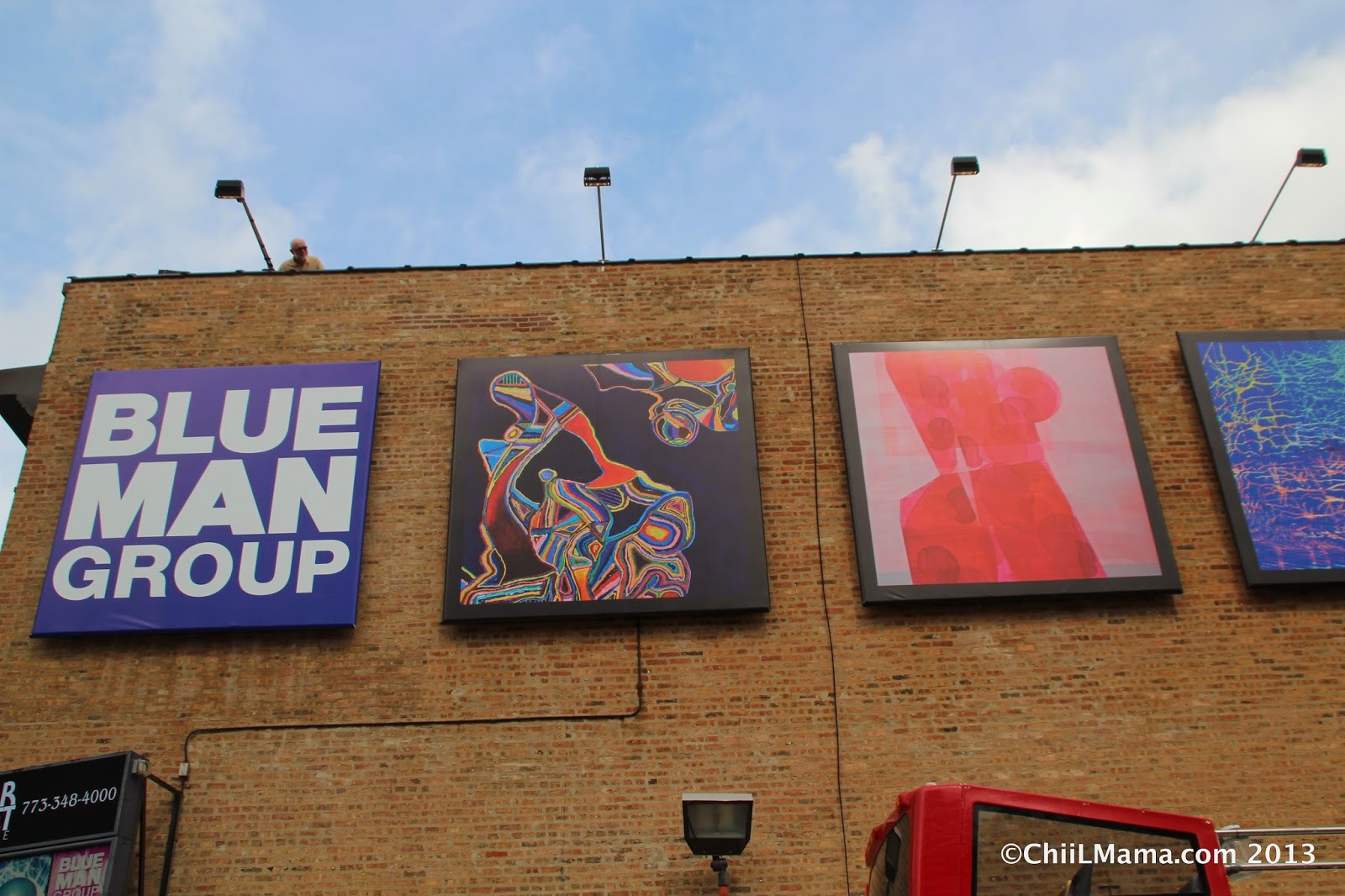 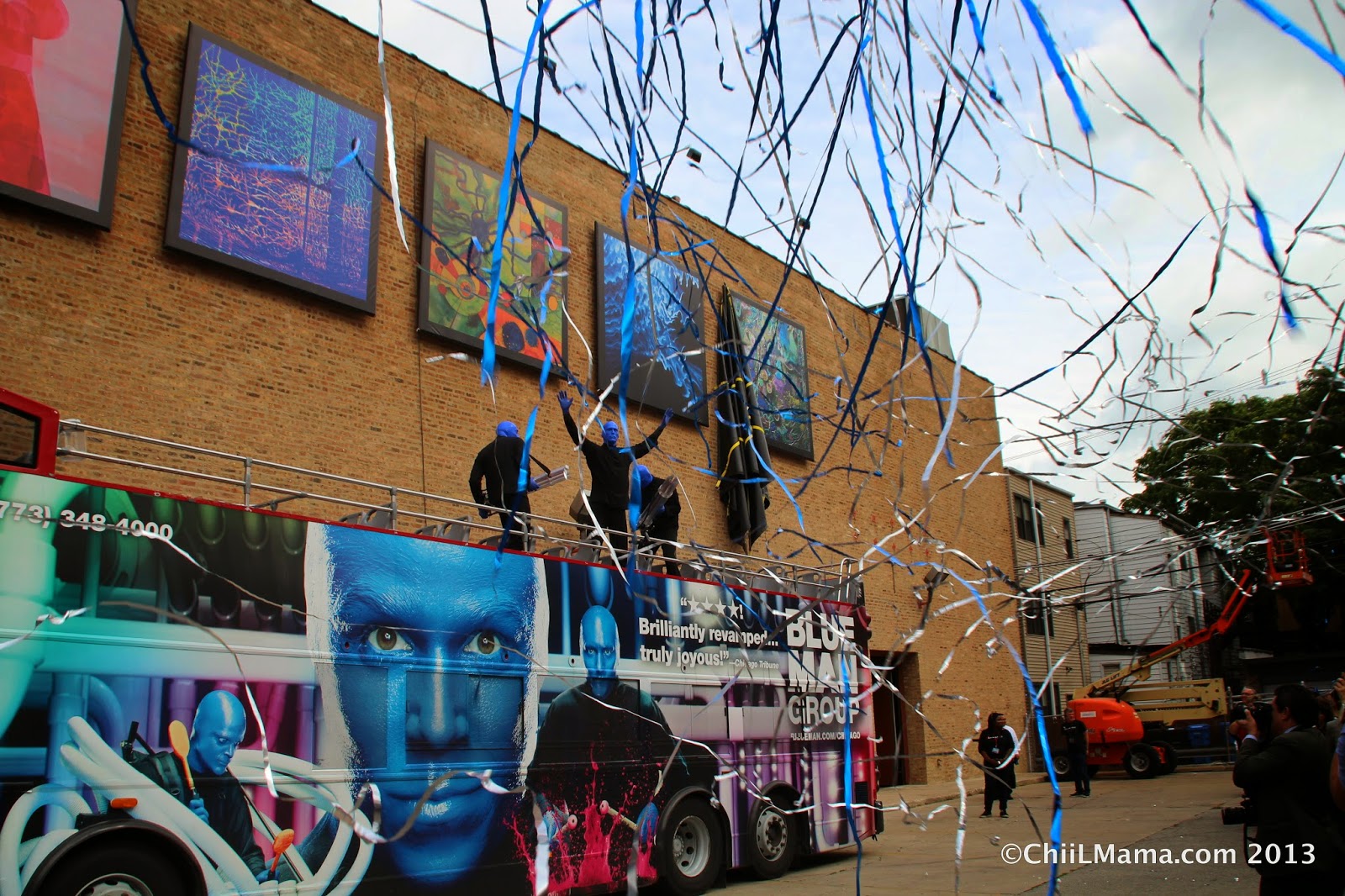 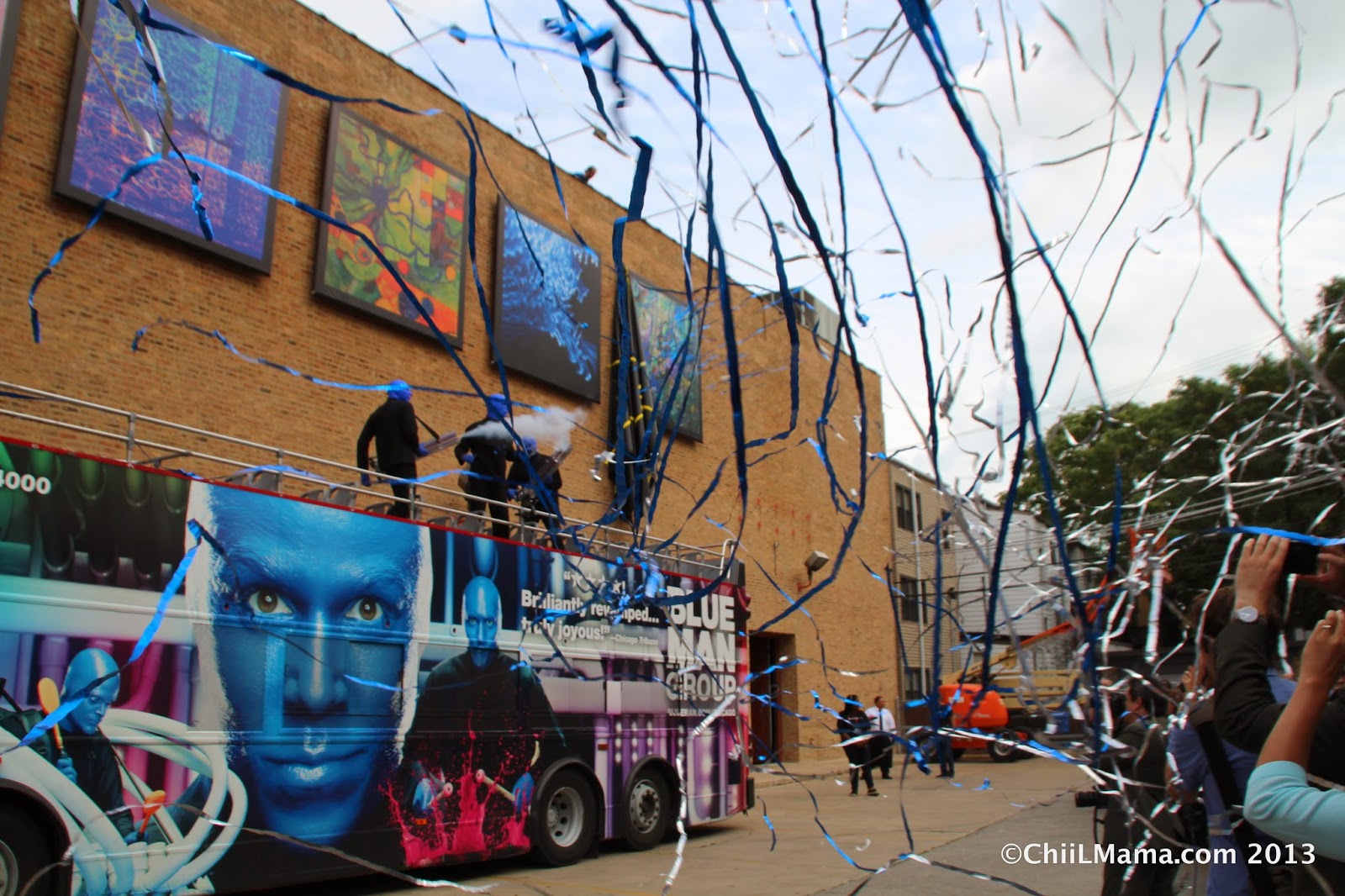 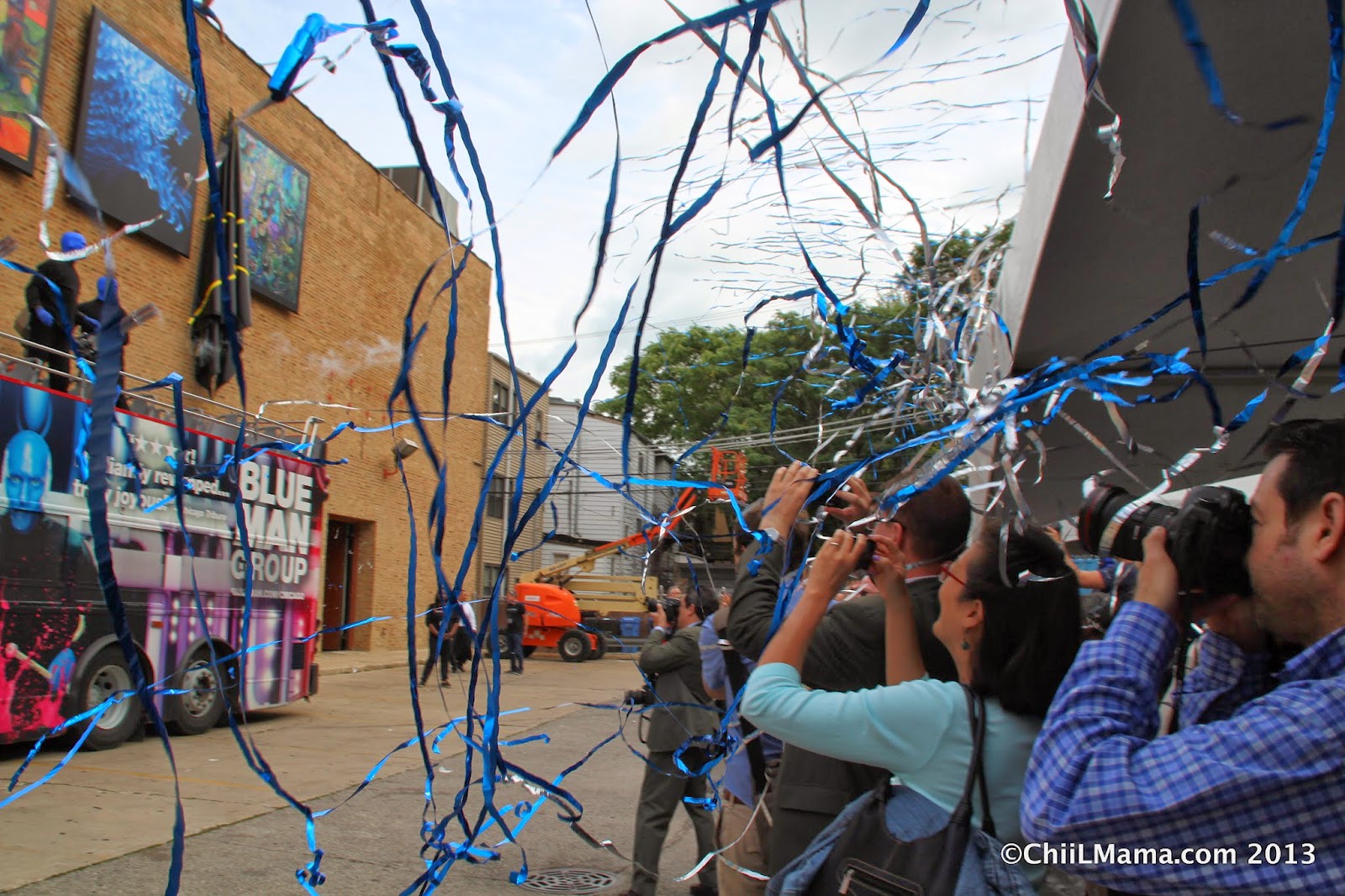 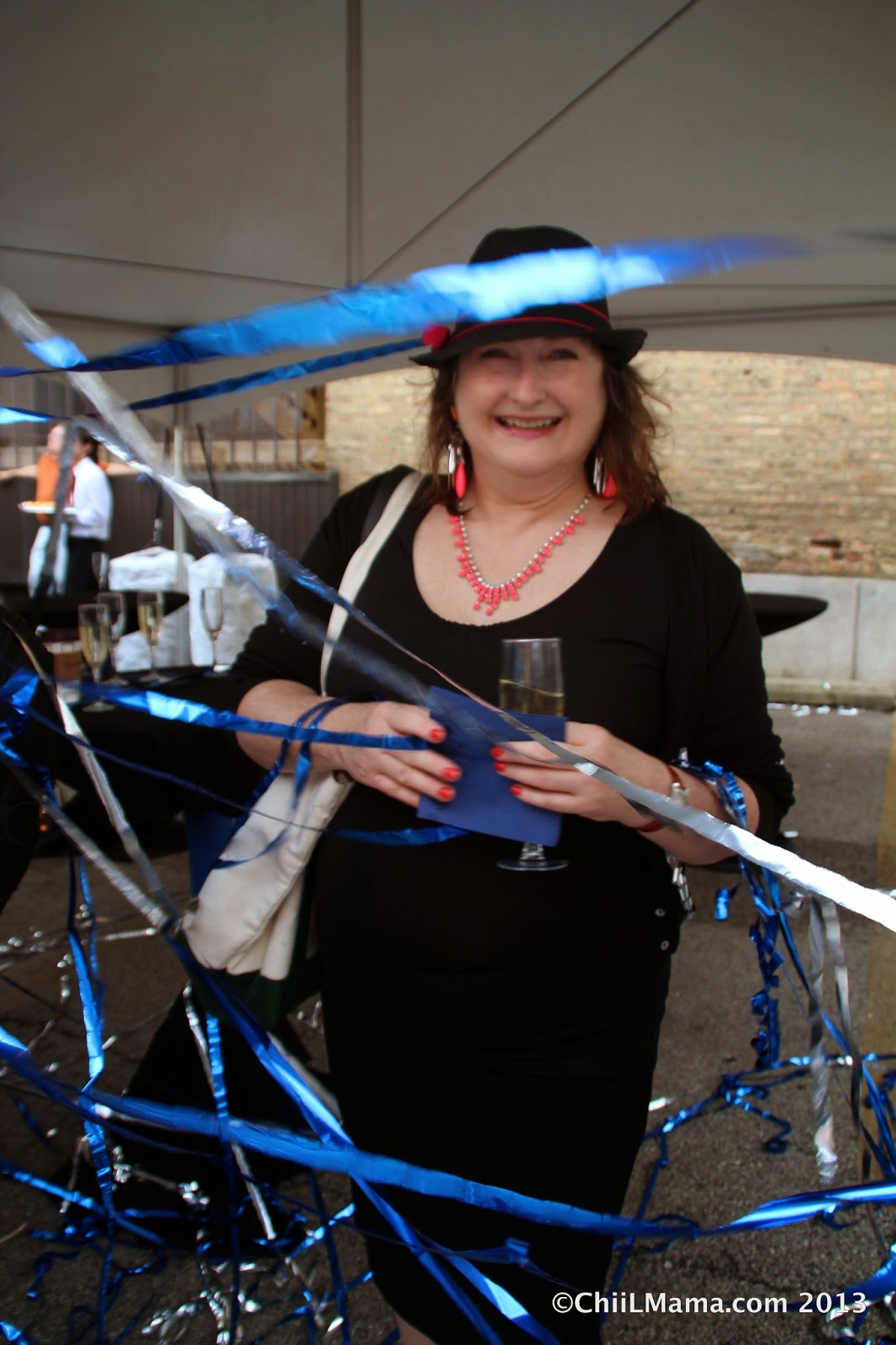 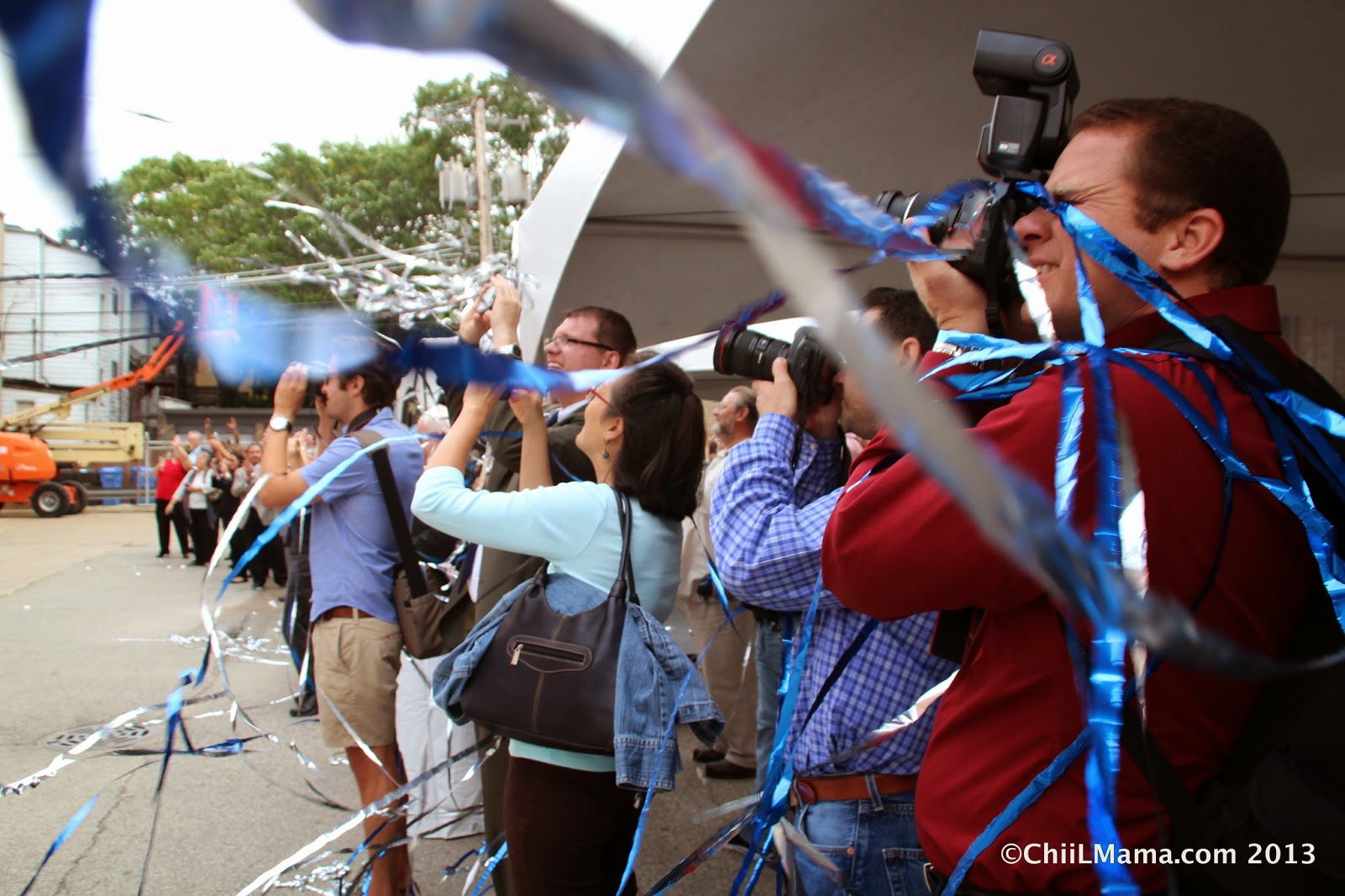 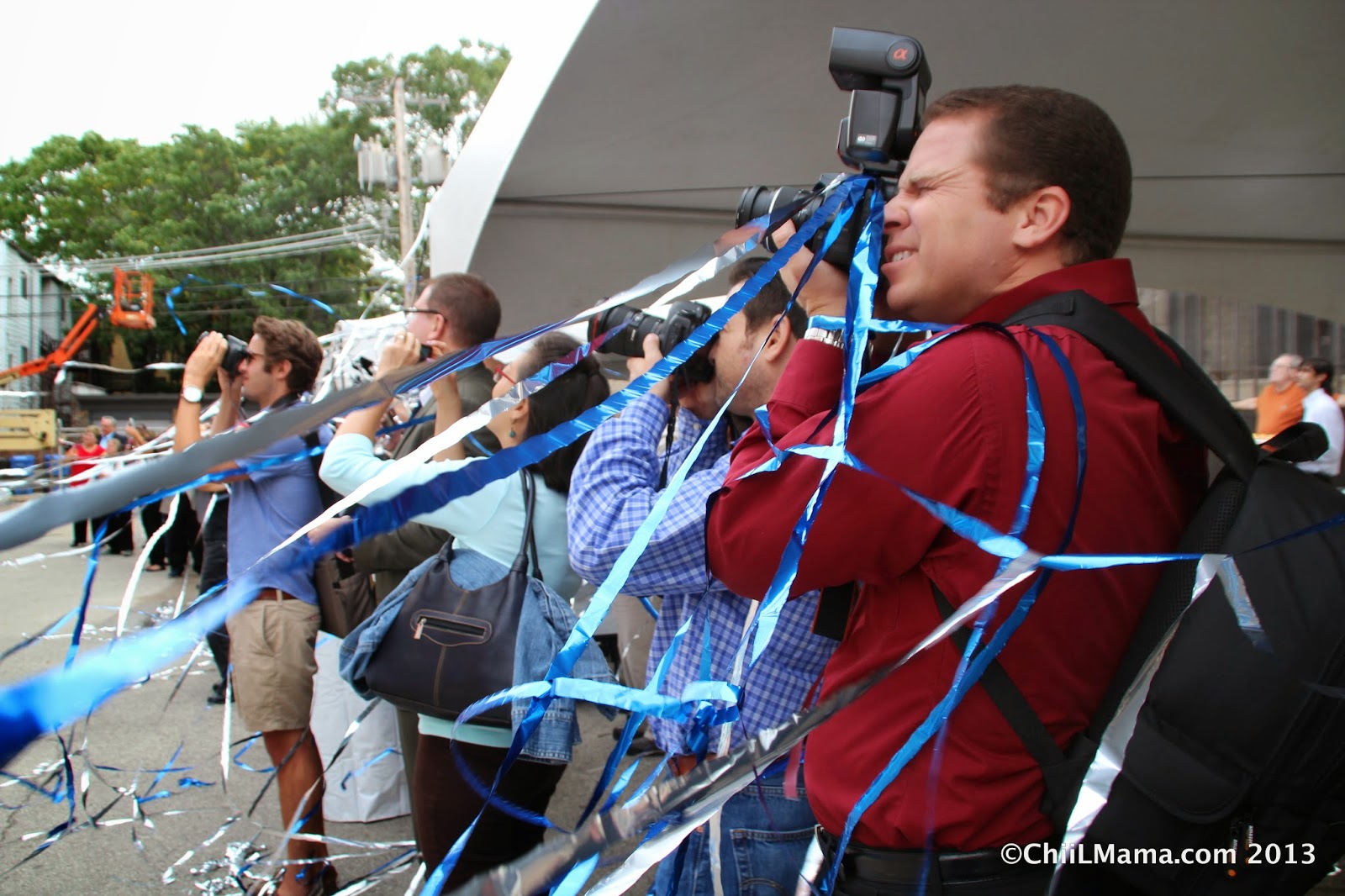