ACT OUT: CHICAGO COMMERCIAL COLLECTIVE TO PRESENT THE NEW COLONY’S “5 LESBIANS EATING A QUICHE” MAY 1 – June 8 AT THE CHOPIN THEATRE 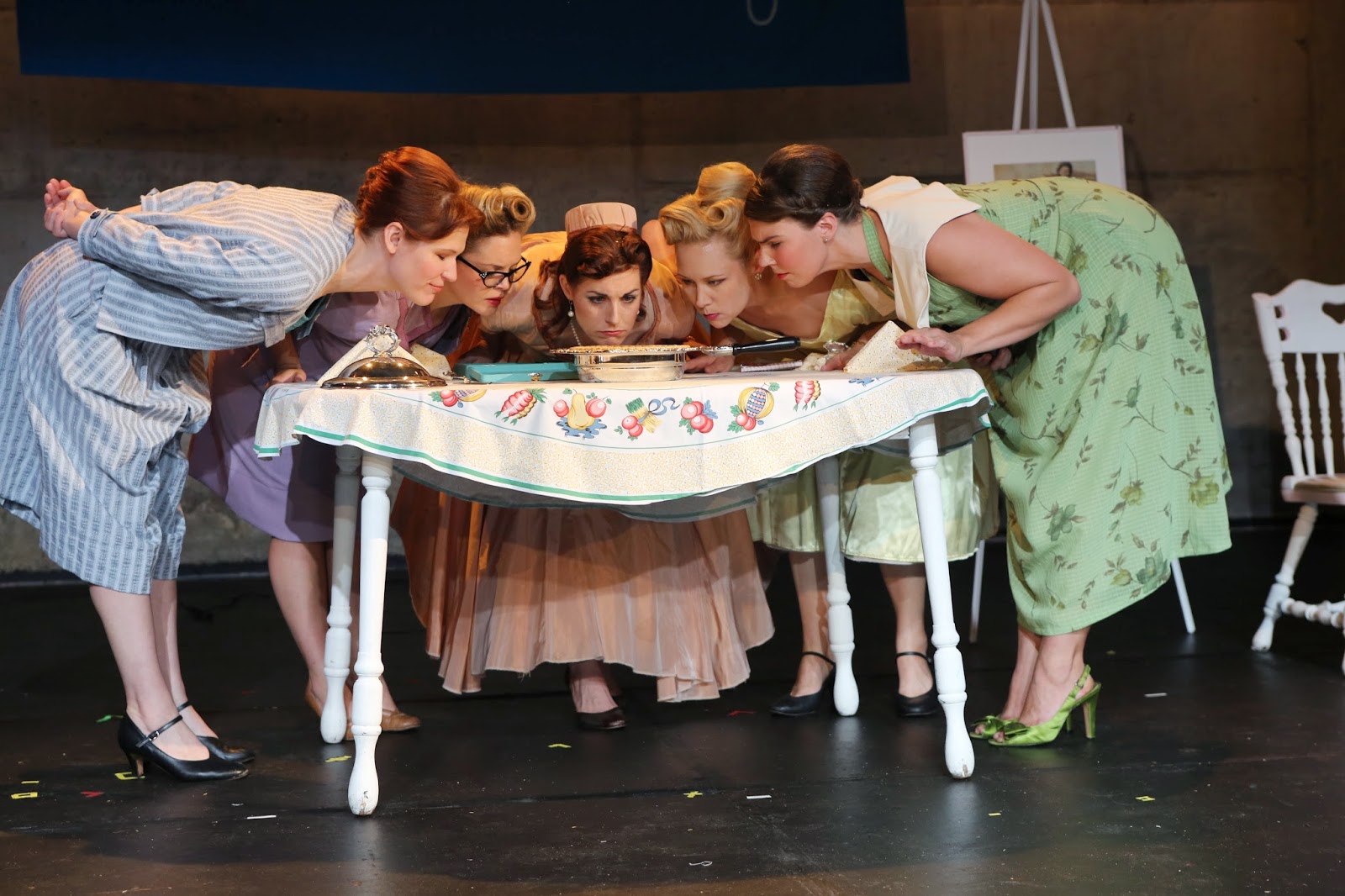 The hilarious send-up of 1950s cold war repression and kitsch culture, “5 Lesbians Eating Quiche” was an original critically-acclaimed creation by The New Colony.  This remount featuring the original off-Broadway cast is presented by the Chicago Commercial Collective, running May 1 to June 8 at the Chopin Theatre, 1543 W. Division Street.  Tickets ($15 - $40) are on sale now.  The press performance will be Tuesday, May 6, at 7:30 p.m.

“5 Lesbians Eating Quiche,” co-written by Andrew Hobgood and Evan Linder and directed by Sarah Gitenstein, finds five women assembled in a church basement (along with the audience) for the 1956 annual meeting of the Susan B. Anthony Society for the Sisters of Gertrude Stein’s annual quiche breakfast.  The normally idyllic gathering, where the motto is “no men, no meat, all manners,” is upended when the Society’s matriarchs must confront the startling revelation that an atom bomb may be falling on their fair city.   As fears are confronted and confessions fly, the chipper ladies stay firm in their commitment that the quiche is a mighty thing and that one must “respect the egg.”

Following the upward trajectory from its debut as a short play presented at Collaboraction’s Sketchbook Festival in 2010 to a full production during The New Colony’s 2011 season, “5 Lesbians Eating a Quiche” enjoyed a meteoric rise with audiences and critics.  Reviewing for the Chicago Tribune, Kerry Reid said, "The New Colony's show dishes up high-spirited theatrical comfort food with a bit of a saucy kick."  After wowing Chicago where Time Out Chicago called it “smart, sharp and hysterically funny,” the comedy went on to play a sold-out engagement at the 2012 New York International Fringe Festival, winning a “Best Overall Production” award.  This was soon followed by a successful off-Broadway run at New York’s SoHo Playhouse.  The New York Times said the work’s “raw and magnetic dementia seems destined to attract a cult following.”

“Giving new attention and life to successful productions like ‘5 Lesbians Eating a Quiche’ is what the Chicago Commercial Collective is all about,” said Collective Producer Brian Loevner.  “The show had an incredible following here and then brought Chicago’s raucous take-no-prisoners brand of live theater to New York.  We look forward to bring a great cast to Chicago so that an even larger audience can enjoy this wonderful show.”

About Playwrights Andrew Hobgood and Evan Linder
Andrew Hobgood is the founding artistic director of The New Colony where his work includes writing and directing the new musicals “Tupperware: An American Musical Fable,” “That Sordid Little Story,” and “Rise of The Numberless.”  His directing credits include “Amelia Earhart: Jungle Princess;” the original and commercial productions of “FRAT;” “Hearts Full of Blood,” which won Outstanding Script at the 2010 New York International Fringe Festival, and “B-Side Studio,” a four-episode sitcom produced in collaboration with The Inconvenience and the University of Chicago TAPS program.  His most recent play “reWILDing Genius” was commissioned by the University of Chicago and made its world premiere as part of the 2014 Steppenwolf Garage Rep Series.

Evan Linder is a founding member and co-artistic director of The New Colony. A playwright and actor, Linder teaches playwriting at the University of Chicago and has had the pleasure of working with Victory Gardens, The Inconvenience, Collaboraction, Bailiwick Chicago, the side project and Bohemian Theater Ensemble since moving to Chicago. Other works include “FRAT,” “11:11,” “The Warriors,” “The Bear Suit of Happiness” and “B-Side Studio.” He was recently listed in Chicago Magazine’s 2013 Power List of Theater Scene-Stealers.

About Director Sarah Gitenstein
Sarah Gitenstein is the associate artistic director at The New Colony and company member at Collaboraction Theater. She is a native of Washington, DC, and a Cum Laude graduate of Kenyon College with a degree in theater. She is the former casting director at Collaboraction where she worked on “The Intelligent Design of Jenny Chow,” “Jon” and the Sketchbook Festival.  Gitenstein has directed for various theaters in Chicago, including Curious Theater, American Theater Company (Big Shoulder's Festival), The Mammals, Pavement Group (Amuse Bouche), and Victory Gardens Theater (One Minute Play Festival). Gitenstein directed the Off-Broadway and national tour of “5 Lesbians Eating a Quiche,” and most recently she directed the Jeff Recommended production of The New Colony's “Kate and Sam Are Not Breaking Up.”

About the Chicago Commercial Collective
The Chicago Commercial Collective is a commercial theater company focused on producing Chicago theater of incredible quality and commercial appeal, thereby helping Chicagoans discover the finest of their city’s vibrant theater scene and worthy Off-Loop productions find larger commercial success.   Recent projects include the successful commercial remount last fall of TimeLine Theatre Company’s “To Master the Art” at Chicago’s Broadway Playhouse. The Collective is also presenting The Off-Loop Tour, which will export some of the best of Chicago theater throughout the Midwest in 2014-15. Productions on the tour include “there is a happiness that morning is” by Mickle Maher (originally produced by Theater Oobleck), “A Steady Rain” by Keith Huff (originally produced by Chicago Dramatists), “Unveiled” by Rohina Malik, “Honeybuns” by Dean Evans and “Crime Scene: A Chicago Anthology” by Anthony Moseley (both originally produced by Collaboraction).

The Collective’s goal is to support a thriving small and mid-sized commercial theater scene. The Collective focuses on producing theater with proven popularity and builds upon the interest already generated during their original production runs. For investors, the Collective provides opportunities to partner on exciting projects with reasonable financial returns on their investments, while non-profit theater companies enjoy the benefits from their original successful productions that, due to scheduling issues or theater availability, may end before they have reached the audiences they deserve. Further, artists who question if Chicago’s theater job market can provide stability and fair wages can rely on the Collective to transform the local industry with the development of mid-sized commercial theater and consistent employment opportunities.

The Chicago Commercial Collective is also presenting The Inconvenience’s “Hit the Wall” at the Greenhouse Theater, 2257 N. Lincoln Avenue, Chicago, April 22 to June 29. Tickets ($20 -$55) are on sale now at greenhousetheater.org, 773.404.7336 or the Greenhouse Theater Box Office (open 12 noon to 8 p.m. on Wednesdays through Saturdays and 12 noon to 4 p.m. on Sundays).

About The New Colony
The New Colony, the 2011 recipient of the Broadway In Chicago Emerging Theater Award, strives to contribute original material to the American artistic canon and develop a new kind of theater going audience. Through collaboration with emerging artists of all disciplines, The New Colony continually develops new work and fresh perspectives. With the goal of exploring enticing subject matter and the common language of experience, The New Colony will cultivate the next generation of arts supporters.  More information at thenewcolony.org.
Posted by Bonnie Kenaz-Mara at 8:52 AM No comments: