OPENING: Midwest Premiere of TIME IS ON OUR SIDE Via About Face Theatre at Theater Wit

About Face Theatre Presents the Midwest Premiere of
TIME IS ON OUR SIDE
By R. Eric Thomas
Directed by Artistic Director Megan Carney
March 1 – April 7, 2018 at Theater Wit

Following its sell-out hit Significant Other, About Face Theatre is pleased to continue its 2017-18 season with the Midwest premiere of R. Eric Thomas’ gleeful mystery TIME IS ON OUR SIDE, directed by Artistic Director Megan Carney, playing March 1 – April 7, 2018 at Theater Wit, 1229 W. Belmont Ave. in Chicago. Tickets are currently available at aboutfacetheatre.com by calling (773) 975-8150 or in person at the Theater Wit Box Office.

I'll be out for the press opening March 7th, so check back soon for my full review. 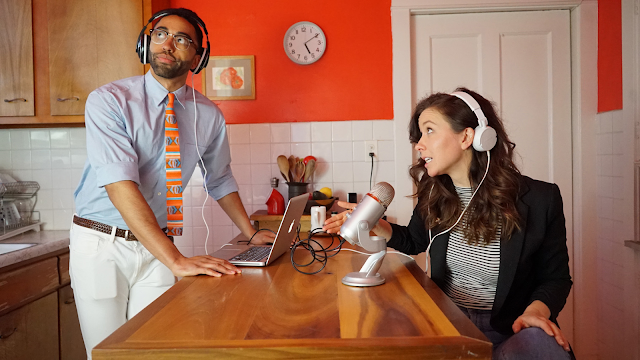 (left to right) Maggie Scrantom and Rashaad Hall in a publicity image for About Face Theatre’s Midwest premiere of TIME IS ON OUR SIDE. Photo by Anna Gelman.

TIME IS ON OUR SIDE features Esteban Andres Cruz, Rashaad Hall, Riley Mondragon and Maggie Scrantom.

Besties Annie and Curtis struggle to produce a podcast that “queers history” until the discovery of a mysterious family journal launches them into a high stakes and hilarious investigation of the early LGBTQ rights movement. Hopping from the Underground Railroad to Rosa Parks, from the AIDS Quilt to Celebrity Jeopardy, the political gets personal.

“This is a hilarious and deeply personal story,” comments Director Megan Carney. “It brings together rich characters of different generations who share a longing to connect, which makes it such a perfect play for us at About Face Theatre. The play weaves a range of stories in which younger folks uncover their roots and elders pass on what they know. All together, a powerful story emerges revealing acts of resistance and queer magic through the decades.”

Regular run: Thursday, March 8 – Saturday, April 7, 2018
Curtain Times: Wednesdays, Thursdays, Fridays and Saturdays at 7:30 pm; Sundays at 3 pm. Please note: there will not be a performance on Friday, March 9.

Artist Biographies
R. Eric Thomas (Playwright) is an award-winning playwright, humorist and the long-running host of The Moth in Philadelphia. His play Time is on Our Side was the recipient of two Barrymore Awards including Best New Play and was named a finalist for the Harold and Mimi Steinberg American Theatre Critics Association New Play Award. Forthcoming productions include Mrs. Harrison at Azuka Theatre. He writes a daily humor column for Elle.com in which he “reads” the news. In addition to Elle.com and ELLE magazine, his writing has appeared in the New York Times, W Magazine, Man Repeller, Philadelphia Inquirer, Philadelphia Magazine and more. www.rericthomas.com

Megan Carney (Director) is a director, playwright, educator and the Artistic Director of About Face Theatre. Recent Chicago directing credits include Julie Jenson’s Winter, George Brandt’s Grizzly Mama, Danielle Pinnock’s Body/Courage and Lisa Dillman’s American Wee Pie and The Walls with Rivendell Theatre Ensemble. She was lead interviewer and playwright for Women at War, a multi-year performance and civic dialogue project about women in the military that continues to tour. Megan was a founding director of About Face Youth Theatre and served as Associate Artistic Director for several years while she created original ensemble plays. Carney’s work has been recognized with multiple After Dark Awards, the GLSEN Pathfinder Award, an APA Presidential Citation, induction in Chicago’s Gay and Lesbian Hall of Fame, a Rockefeller Foundation MAP Grant and a GLAAD Media Award nomination. Megan served as the Director of the Gender and Sexuality Center at the University of Illinois at Chicago from 2011-2017 where she created arts based educational programs for and about diverse LGBTQIA+ people and communities. She has a MFA in Theatre Arts from Virginia Tech with a focus on Directing and Public Dialogue.

Posted by Bonnie Kenaz-Mara at 6:22 AM No comments: