I had the sweet opportunity to cover Sailor Jerry's Cobrafest, Pitchfork After Party at Cobra Lounge on Saturday for The Local Tourist.  Our original coverage along with a preview of Sunday's sick lineup appears here.   Below we've included an excerpt from that piece.

When I hear sailor, I think rum, tunes and tattoos in that order.   Saturday night, thanks to Sailor Jerry, we partied old school, like a bunch of sailors on shore leave.
Cobrafest was the ultimate Pitchfork after party within short walking distance of Union Park.  Sailor Jerry was even giving out wooden nickles worth a free spiced rum drink of your choice, and black VIP armbands for free drinks all night.  On the back patio, they had sweet swag like free black t's, buttons, and CDs for everyone.  I tried a Sailor Jerry's Spiced Rum/ lemonade/ iced tea combo, refreshing after a hot day in the sun.   My favorite was the Sailor Jerry's Spiced Rum/ ginger beer/ ginger ale.    Spice up and cool down your summer.
This Cobra's got bite.
Bites to eat and eats with a bite that is!    We thoroughly enjoyed the jalapeno and chedder corn fritters and Buffalo hot wings.  We also went for the comfort food and had some unbelievably tasty mac and cheese.  Highly recommended in the beyond bar food genre.
Last night we met up with a slew of band members getting free tattoos in the Sailor Jerry's Airstream from Chi-Town artist, Nick Colella, of Great Lakes Tattoo.  After they got inked up,  we saw them rock the stage from around 10pm when the crowds left Pitchfork, to well after 1am.  It was "Ladies Night" and truly a pleasure to check out girl bands Habibi, White Mystery, Heavy Cream, and Coathangers.  We're old school punk/metal fans at heart and these girls (and token boy--Francis Scott Key White, drummer in White Mystery) rocked!
Cobra could have been playing our ipod before and between sets.    They had some seriously sweet playlist going on....heavy on the 80's punk and metal.    Then on the back patio, things were chill with a DJ spinning mellow, retro 50's classics.


All night on stage, the girl punks killed it.    Check out their web sites below:
The Coathangers from Atlanta
Heavy Cream from Nashville
Chi-Town's own Miss Alex White and Francis Scott Key White aka White Mystery
Habibi from Brooklyn

Check back with ChiIL Live Shows like we vote in Chi, IL...early and often.   We have live HD show footage and loads of our original band video interviews coming soon including:

*We've also got press credentials again for Lollapalooza, so we'll have a ton of advance press, and photo filled recaps in the coming weeks. 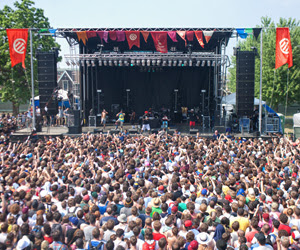 ChiIL Live Shows/ChiIL Mama has been rockin' Pitchfork bands all year.  We've been sharing their tours, forwarding their free downloads and posting their new videos all year long.   We've also been shooting their live shows in Chi-Town and shooting original band video interviews.   Now it's just about time again for summer festival season, so get your Pitchfork tickets and come get your groove on and rock Union Park.

Last year, my son Du-Jay who was 10, had the opportunity to go behind the scenes and interview a number of the musicians at Pitchfork himself!   He came with a class full of kids from 826CHI, one of our fav non profits for free creative writing classes.  Pitchfork's known for hosting awesome info booths for most of our city favorites like Girls Rock Chicago, 826CHI, and roller derby!   They have an excellent, eclectic assortment of crafts, collectable posters, vinyl and more.   And the food booths are a multicultural bonanza of tasty treats.


**The best news for families is kids under 10 are FREE with a paying adult!!   Put those little tax deductions to work saving you even more green and come rock out with the punk kin.**

We've gone AND taken the kids just about every year and they have a blast!!


Here's what Pitchfork has to say:

In its seventh year, the Pitchfork Music Festival continues to be one of the most well regarded and exceptional festivals in the country.  Consistently praised for its discerning lineup, inviting and laid back environment, reasonable prices, wide array of activities, and much more, there is very good reason why people across the world return year after year! This year’s event, happening Friday, July 13 – Sunday, July 15 at Chicago’s Union Park, is now less than two months away. A limited number of single day tickets for each day of the fest are still available for $45 at www.ticketweb.com. As previously noted, prices have stayed the same this year!

In addition to its musical offerings, the fest also features a wide array of other activities, including 50 individual vendors, plus specialty fairs, for attendees to enjoy. News regarding these festival elements will be announced in the coming weeks.

This year, we are excited to introduce “The PMF Upgrade Challenge.”  For one hour, once a week, Chicago radio station and festival partner WXRT 93.1 will present “The PMF Upgrade Challenge” for festival ticketholders. 2012 attendees are invited to participate for a chance for them and a friend to be upgraded to VIP for the entire festival weekend. Even if you just have a single day pass, you and a friend will be upgraded for the entire weekend! To participate, keep an eye on WXRT and the Pitchfork Music Festival Facebook pages where contests will be presented in the forms of questions and other challenges.  Winners will be chosen based on their responses to these contests. This will be happening at one random hour each week, and each week, two pair of tickets will be upgraded to VIP for the entire weekend.