THE CHICAGO PREMIERE OF 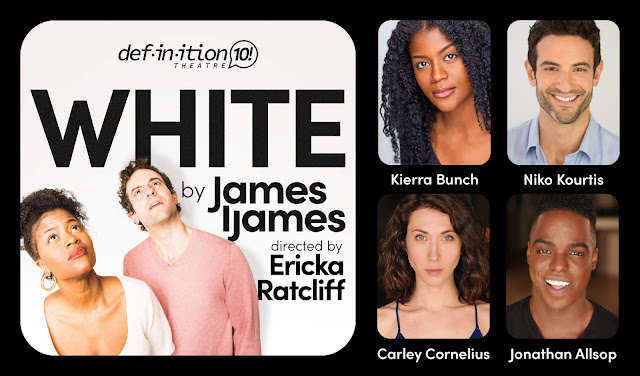 Definition Theatre opens its 10th anniversary season with the Chicago premiere of WHITE by ensemble member James Ijames and directed by Ericka Ratcliff. Produced in partnership with Steppenwolf Theatre Company’s LookOut Series, WHITE will run in Steppenwolf’s 1700 Theater from March 10 – April 10, 2022. I'll be out for the press opening March 17th so check back shortly after for my full review. Tickets are on sale now and may be purchased at steppenwolf.org or in person at the Steppenwolf Theatre Company box office.

“After much anticipation, we are elated to present this incredible piece of theatre from Definition ensemble member James Ijames,” shared Artistic Director Tyrone Phillips. “I am also looking forward to collaborating with director and Chicago theatre treasure Ericka Ratcliff, who is embarking on this new journey with us. Much like America V2.1, the theatrical film production Definition released in fall 2021, WHITE invites the audience to grapple with themes of power and authorship. This hilarious, thought-provoking piece holds our society accountable to artists as it is asks, ‘Who is allowed to create art? And how do we decide what creative work is worth?’”

Gus is a painter expecting his big break with a prestigious contemporary art museum in 'The New America' exhibition. When he's told by the museum's new curator that "white dudes" aren't a part of New America, he enlists the help of Vanessa, a black actress, and together they create Balkonae Townsend, a bold, young radical artist to serve as the face of his work. But when things start to spiral out of control, Gus is left to deal with the mess he created and Vanessa must come to terms with her own agency as an artist. Audacious and bitingly funny, WHITE explores white privilege, racial politics and the fine line between appropriation and opportunity.

Box Office:  Ticket orders will be processed at steppenwolf.org and in person at Steppenwolf 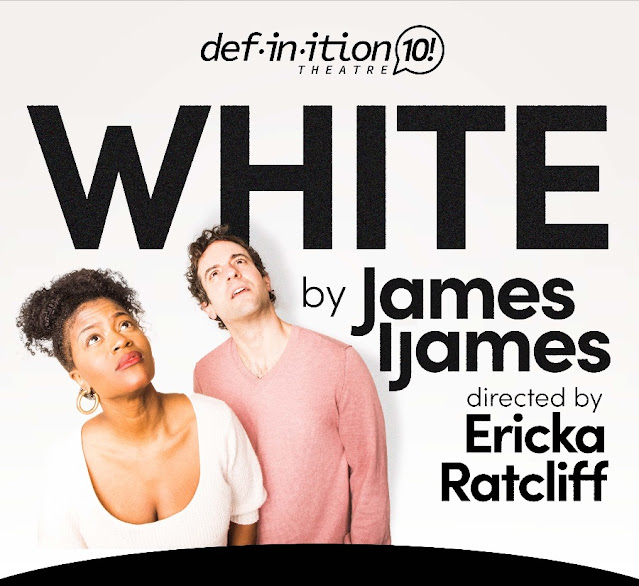 Definition Theatre is a culturally diverse theater dedicated to telling language-driven, relationship-oriented, socially relevant stories about and created with underrepresented communities in Chicago. Our ensemble is a collective of artists, art administrators, educators, and designers who prioritize working towards and representing a more equitable theatre industry.

Deﬁnition has built its reputation on work that reﬂects its unique voice. It shared the words of Academy Award- Winner Tarell Alvin McCraney in The Brothers Size; it grooved with Amiri Baraka’s whirlwind story of a chance meeting on a train in Dutchman. In partnership with, The New Colony staged the world premiere of Byhalia, Mississippi, which starred Academy Award nominee ensemble member Kiki Layne. In association with the Goodman Theatre, Definition staged the Chicago premiere of Branden Jacobs-Jenkins’ An Octoroon, a subversive take on race in America that captivated audiences. Most recently, Definition sent us all to the moon with ensemble member James Ijames’s Moon Man Walk, explored the challenges of America’s public-school system through Nilaja Sun’s No Child… and highlighted the first- generation experience in the world premiere of Sam Kebede’s ETHIOPIANAMERICA.

LookOut is Steppenwolf’s performance series that presents the work of artists and companies across genre and form, emerging artists and performance legends, quintessential Chicago companies and young aspiring ensembles, familiar Steppenwolf faces and new friends. Patrick Zakem and Lauren Steinberg are the Producers for the series. For more information, visit steppenwolf.org/lookout. Steppenwolf’s 1700 Theater is a flexible and intimate venue connected to Steppenwolf’s own Front Bar: Coffee and Drinks at 1700 N Halsted St., an inviting space to grab a drink, have a bite, or meet up with friends and collaborators, day or night.

Posted by Bonnie Kenaz-Mara at 2:42 PM No comments: