ChiIL Live Shows will be out to review on February 24th, so check back shortly after for our full review. We're elated Gift Theatre is tipping the scales toward presenting more female written and directed shows this season. Unseen is the first of three world premieres written by women that comprise Gift's exciting 2017 season. This tiny but might theatre is big on presenting world class, professional productions in an incredibly intimate space. They're favorites of ours and we can't wait to catch their latest.

Conflict photographer Mia wakes up in the Istanbul apartment of her on-again, off-again girlfriend after being found unconscious at the scene of a massacre she was photographing. Mia can’t even remember being there, but she wired photos of the site hours before being found. The two women resume their volatile push-pull when Mia’s well-meaning Californian mother arrives from the United States, trying to help unravel the mystery of what happened to her daughter.

“When I first read this play, it took my breath away,” says Artistic Director Michael Patrick Thornton. “To recognize each other’s humanity, to see each other’s pain and say ‘I love you completely for who you are’ is the highest gift we can give each other. As wars continue to rage on our planet, Unseen is a masterwork about love, trauma, and repair in the lives of those for whom war is not just a story, but real life. We are humbled and thrilled to tell this story at The Gift.” 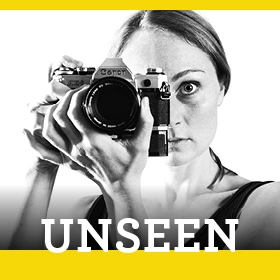 Tickets for Unseen range from $30-$40 and are available by calling the Gift’s box office at 773-283-7071 or visiting thegifttheatre.org. Season subscriptions are also on sale now and range from $75-$190, with special pricing available for members under the age of 30

Senior, Student, Veterans and Industry discounts available.
Come Closer on Sunday, April 2 for a talkback with the cast, drinks, and a couple of themed appetizers! Tickets to this special event are $55 and sell out quickly. Reserve your spot today.
Posted by Bonnie Kenaz-Mara at 3:41 PM No comments: