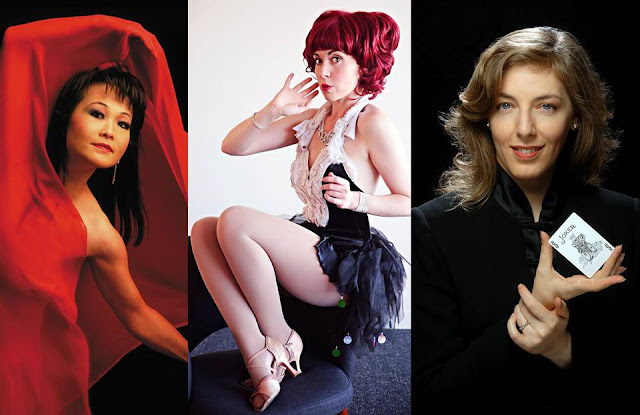 “When we first opened the Chicago Magic Lounge, one of the conversations we had was about the comparatively small number of female to male magicians in the industry. Why aren’t there more female magicians?, we wondered,” notes Joseph Cranford, CEO and Co-Owner of Chicago Magic Lounge. “We firmly believe that a diversity of backgrounds and experiences is the key to innovation in any art form. As an organization, we are committed to doing our part to support female magicians and encourage more women to become part of the magic community. We hope that Spotlight: Women in Magic brings more people into the conversation.”

While female magicians are rare – research studies estimate only 5-10% of professional magicians and magic club members are women – they have played an important role in the history of magic. Groundbreakers include Adelaide Hermann, Lisa Menna, and June Horowitz. Hermann took over her late husband’s magic act in the early 1900s and became one of the most famous magicians of her day. Lisa Menna faced discrimination early in her career only to become the first woman to lecture and perform at the International Federation of Magic Societies (FISM), one of the most respected organizations in the magic community. Menna then went on to found the non-profit organization, Cause to Wonder, a theatre for social change that coordinates curiosity-based events across the globe. Chicago-born magician June Horowitz began performing magic around 1920 when female magicians were a rarity. With skill, wit, and determination, she earned the respect of the nearly all-male magical community and went on to become the first female president of the International Brotherhood of Magicians in 1987. Horowitz continued performing magic until she passed away at the age of 104 in June of 2018. Spotlight: Women in Magic is dedicated to her memory.

Spotlight: Women in Magic performances are as follows:

Chicago Magic Lounge presents a special Spotlight: Women in Magic edition of The Signature Show featuring some of the best female magicians working today. The Incredible Jan Rose will be the guest host for the weekend, as well as performing table-magic during the cocktail hour along with regular CML house magicians, including Jeanette Andrews, Paige Thompson and Nancy Anderson, plus newcomer to the CML tables, Emily Hosman. The evening will continue with an hour of stage magic featuring Carissa Hendrix (aka Lucy Darling) and headliner (and first-time guest) Jade, the first woman to win the Gold Medal of Magic from the International Brotherhood of Magicians. Guests who purchase Mezzanine, Front Row and Premium Main Floor tickets are invited to an exclusive performance of close-up magic by Alba directly after the show in our 43-seat close-up gallery, The 654 Club.

Jade (Headliner) took the male-dominated world of magic by storm in 1990, when she became the first woman to win the International Brotherhood of Magicians’ coveted Gold Medal of Magic, a prize awarded only a handful of times in the competition’s long history. She has performed and received multiple awards for her performances here and abroad, including the Mandrake Award from France as well as the “Female Magician of the Year” award from the International Magicians Society in Las Vegas. Fluent in Cantonese, Mandarin, and English, Jade has performed on the stages of variety theaters around the world, on luxury cruise lines, and in casino revue shows in Atlantic City, Lake Tahoe, Las Vegas, Malaysia, and Australia. She has also delighted audiences in numerous appearances on international and American television, including CBS’ Late Late Show and CW Network’s Penn & Teller: Fool Us! Jade’s command performance for the Royal Family of Monaco at the Princess Grace Theater was one of her many career highlights. Among her impressive list of corporate clients includes Sony, Facebook, Apple Computer, and Google.

Carisa Hendrix, aka Lucy Darling, (Featured Act) is a lady of extraordinary ability known for her comedy magic and her exceptionally good hair. She is an award-winning entertainer featured in the Guinness Book of World Records (2014 Book, Page 86), Ripley’s Believe it or Not (2015 Book) and the winner of the Melbourne Magic Festival award for the best comedy magic show.

Alba (654 Club) became the first female magician from South America to appear at Hollywood’s famous Magic Castle in two of its main stages. Her tools of the trade are her magnetic personality, theatrical training, command of English and Spanish, upbeat sense of humor, sleight of hand (and mind!) plus a deep respect for her audience. This Argentinian travels all over the world with her unique style of magic. The list of celebrities she has performed for is long, but the most famous is Cardinal Jorge Bergoglio, currently known as Pope Frances.

The Incredible Jan Rose (Host, Table Magician) is a professional entertainer who is most often seen on stage performing her act for corporate events, trade shows, exclusive private parties as well as a frequent performer at the Chicago Magic Lounge. Jan’s table side magic is up-close, surprising and delightful. Along with her husband, Danny Orleans, with whom she performs a mentalism act, Jan lectures worldwide to magicians, including at the world famous FISM.

Jeanette Andrews (Table Magician) is a contemporary illusionist and artist who specializes in creating interactive sensory illusions, possessing a contemplative take on the art of the impossible. Combining a lifetime of craft with influences not typically seen in magic performances such as interactive performance art, immersive theater, quantum physics, and philosophy, she invents a unique take on this ancient art form. Andrews uses sensory anomalies and scientific oddities to bridge everyday life to a special, heightened world. Hailed as one of the most innovative illusionists today, Andrews has staged hundreds of performances at museums, theaters and universities across the United States, including sold-out and standing-room-only crowds at the Museum of Contemporary Art and Birmingham Museum of Art. Illusion is Ms. Andrews’ life’s work and her performances have been praised by PBS, The Daily Mail, and the Chicago Tribune.

Paige Thompson (Table Magician)
In an art form dominated by men, Paige Thompson emerges as one of the few world class female magicians. She spent her childhood and young adult life assisting other magicians on stages around the world and on national television including the highly acclaimed Americas Got Talent. Now, having recently been featured on FOX’s Showtime at the Apollo Paige has transitioned to a leading lady taking her passion for magic and experience within the art to give the boys a run for their money.

Nancy Anderson (Table Magician)
Nancy Anderson is a new magician from Minnesota. She volunteers as a Hospital Magician with Open Heart Magic in Chicago bringing smiles to families. She also has taken her magic internationally performing at the Ronald McDonald House in South America.  She is a dedicated student of Magic and a member of the Society of American Magicians and International brotherhood of Magicians. She is a  Wealth Manager and trust lawyer during the day.

Emily Hosman (Table Magician)
In the last 5 years Emily Hosman has performed throughout the country with Ardan James the Animated Illusionist, and has written and directed theatrical illusion performances in the Chicagoland area. Recently graduated with a BA in theatre, Emily is honored to be performing at the Chicago Magic Lounge amongst some of the greatest names in magic.

In addition to its programming, Chicago Magic Lounge is a proud organizational sponsor of Open Heart Magic, a non-profit organization of volunteer magicians who perform Bedside Magic™ for kids in hospitals, regardless of their medical condition or physical abilities.

The newly constructed theater at 5050 N. Clark St., designed by Morris Architects Planners, has ushered in a new wave of entertainment, bringing back “Chicago-style Magic” under the leadership of Donald C Clark, Jr. and Joseph (Joey) Cranford. Converted from a 1940s-era, commercial laundry building, the Chicago Magic Lounge is a 7,200 square-foot, Art Deco, state-of-the-art theater and lounge complete with secret doors, elegant performance areas and a magic bar – all dedicated to the art of sleight of hand, prestidigitation and Chicago's contribution to the magical arts. From magicians to mind readers, Chicago Magic Lounge provides guests the unique, one-of-a-kind experience of seeing wonders up-close and personal in a venue unlike anything else offered throughout the country.
Posted by Bonnie Kenaz-Mara at 11:34 AM No comments: