OPENING: Murder for Two at Marriott Theatre Through August 26

Chi IL Live Shows On Our Radar:
Murder for Two 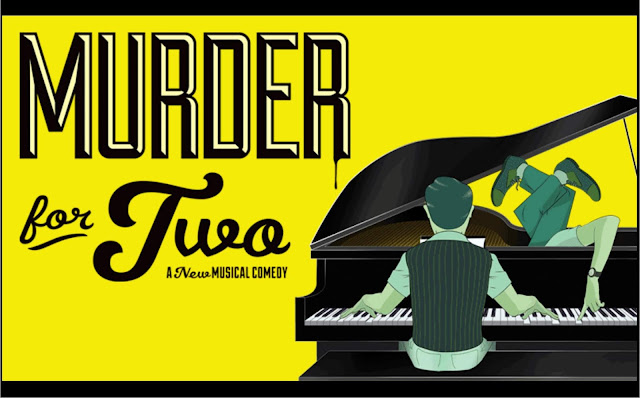 Directed by Scott Weinstein.
runs approximately 90 minutes with no intermission.
The perfect blend of music, mayhem and murder!

Officer Marcus Moscowicz is a small town policeman with dreams of making it to detective. One fateful night, shots ring out at the surprise birthday party of Great American Novelist Arthur Whitney and the writer is killed…fatally. With the nearest detective an hour away, Marcus jumps at the chance to prove his sleuthing skills—with the help of his silent partner, Lou. But whodunit? Did Dahlia Whitney, Arthur’s scene-stealing wife, give him a big finish? Is Barrette Lewis, the prima ballerina, the prime suspect? Did Dr. Griff, the overly-friendly psychiatrist, make a frenemy? Everyone is a suspect in Murder for Two, a hilarious musical murder mystery with a twist: One actor investigates the crime. The other plays all of the suspects. And they both play the piano! A zany blend of classic musical comedy and madcap mystery, this fast and funny whodunit is a highly theatrical duet loaded with killer laughs.

"This production provides a fantastic evening of murder mystery, zany comedy, and true virtuoso performances. There are only two performers that take on 13 roles throughout the entire 90 minutes," says Director Scott Weinstein. "They not only remain on stage for the entire show, but one or both of them are also playing the piano throughout. Whether you are a fan of comedy, mystery, or anything in between, this production will have you begging for more."

Murder for Two stars Noel Carey as "Marcus" (National Tour: Murder for Two; Theatre Under the Stars: Million Dollar Quartet), and Jason Grimm as "The Suspects" (Marriott Theatre: Singin' in the Rain, How to Succeed Without Really Trying), with standbys Matt Deitchman and Matt Edmonds. The production will feature set design by Scott Davis, lighting design by Jesse Klug, sound design by Robert E. Gilmartin, and musical supervision by Patti Garwood.

Call for student, senior and military discounts. On Wednesday and Thursday evenings there are a limited number of dinner-theatre packages available for purchase through the Marriott Theatre Box Office. To make a restaurant reservation, please call 847.634.0100. Free parking is available at all performances.

Posted by Bonnie Kenaz-Mara at 9:23 PM No comments: