OPENING: Teatro Vista Presents the World Premiere of The Wolf at The End of The Block at Victory Gardens

IKE HOLTER'S INTENSE NEW THRILLER
THE WOLF AT THE END OF THE BLOCK
IS TEATRO VISTA'S NEXT WORLD PREMIERE,
JANUARY 28-MARCH 5, 2017

Here at ChiIL Live Shows, we've thoroughly enjoyed Ike Holter's works so far, and his unique vision, so we're eager to check out this world premiere. We will be out for the press opening, so check back soon for our full review.

Chicago. Fall. One night, a boarded up bar on the dark side of the block becomes a terrifying crime scene.
In the next 48 hours, the neighborhood digs deep
into escalating mystery, working against time to separate fact from fiction.
But as the clock ticks down, the clues spiral into a razor sharp jigsaw,
and what began as a simple mystery
quickly twists into a personal, pointed and political thriller.

That's the highly charged set-up for the newest work by acclaimed Chicago playwright Ike Holter, author of such contemporary hits as Hit the Wall, Exit Strategy and Sender.
Teatro Vista, Chicago's leading Latinx professional company, commissioned The Wolf at The End of The Block, and will present its world premiere January 28 through March 5, 2017 at Chicago's Victory Gardens Theater.

Ricardo Gutiérrez, Teatro Vista Executive Artistic Director and director of The Wolf at The End of The Block, says "get ready for a riveting new, full-length play from one of Chicago's hottest young playwrights The story is set in Chicago and has five characters, three of which are Latino. Holter's play is brutally raw, funny and deftly pierces universal truths." 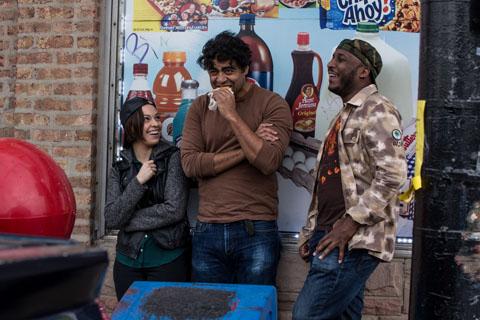 Teatro Vista will debut The Wolf at The End of The Block in the Richard Christiansen Theater at Victory Gardens, located at 2433 N. Lincoln Avenue at the historic Biograph Theater in Chicago's Lincoln Park neighborhood.

Performances run through March 5: Thursday through Saturday at
7:30 p.m., and Sunday at 3 p.m.

Metered, street and valet parking is available near the Biograph. The theater is easily accessed on the CTA Red, Purple and Brown lines via the Fullerton stop. The CTA 8 Halsted and 74 Fullerton buses also stop at Fullerton and Halsted, 1/2 block south of the theater. For more information, visit VictoryGardens.org/PlanYourVisit. 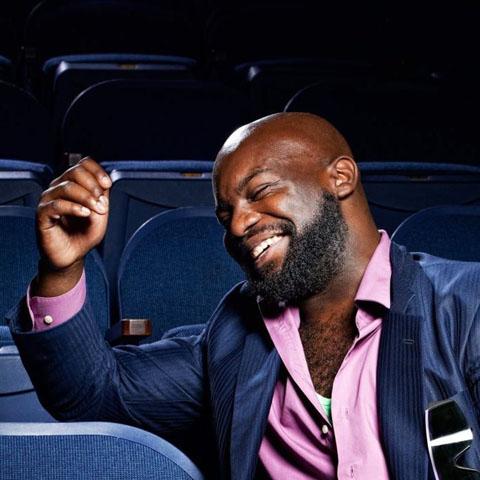 Playwright Ike Holter's work has been produced at The Steppenwolf Garage, A Red Orchid, The New Colony and The Inconvenience, where he is a founding member and resident writer. He's received fellowships and commissions from the Goodman Theater, the Kennedy Center and The Playwrights Center. His show Hit the Wall played at Steppenwolf Garage, Off-Broadway at The Barrow Street Theater in New York, and recently enjoyed an extended run at the Lily Tomlin Center in L.A. Jackalope Theatre premiered his play Exit Strategy which played to sold-out houses and transferred to Michigan's 3 Oaks Theater Festival. It was produced at Philadelphia Stages and transferred Off Broadway to Primary Stages last spring. His most recent play Sender was a smash hit last season for A Red Orchid. Holter was named the "Chicagoan of the Year in Theater 2014" by the Chicago Tribune. His monologues have been published in The New Yorker and several editions of Applause Books. He was recently named one of Victory Gardens' newest ensemble playwrights.

Teatro Vista Executive Artistic Director Ricardo Gutiérrez (director) most recently staged the company's 2016-17 season opener, Mando Alvarado's Parachute Men, also the inaugural production of the Latina/o Theatre Commons' new El Fuego Initiative. Other Teatro Vista directing credits include In The Time of the Butterflies, Between You, Me & The Lampshade, A View From The Bridge, Momma's Boyz, i put the fear of mexico in 'em and La Mágica Posada. He is co-founder of the Alliance of Latinx Theatre Artists of Chicago (ALTA), a service organization dedicated to promoting and fostering Latinx theatre artists in Chicago. As an actor, Gutiérrez just returned from performing Destiny of Desire at South Coast Repertory, which will be remounted in March at the Goodman Theatre. He also appeared in In The Heights at the Paramount and in the world premieres of Song For The Disappeared and Fish Men at the Goodman. He has performed on stage at the Actors Theatre in Louisville, Denver Center Theatre, Steppenwolf Theatre, Victory Gardens and Lookingglass Theatre. TV credits include Chicago PD, Sirens and Boss. Before joining Teatro Vista, Gutiérrez served as the artistic director of Nosotros in Los Angeles and The Canterbury Theatre in Indiana. 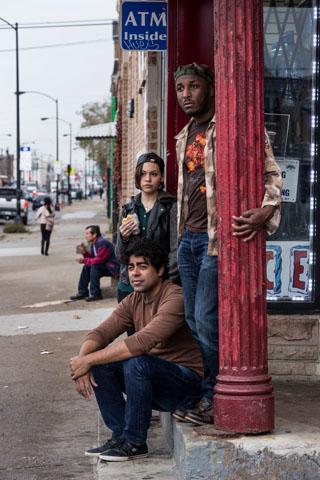 Meet the cast
Gabriel Ruiz (Abe) is a graduate of the DePaul Theatre School and a proud ensemble member of Teatro Vista. Chicago credits include White Tie Ball for Teatro Vista, Singin' in the Rain and City of Angels at Marriott, Man in the Ring and Agamemnon at Court Theater, Arcadia and Company at Writers' Theatre, The Upstairs Concierge at Goodman Theater, Creditors at Remy Bumpo Theater, How Long Will I Cry?, Motherfucker with the Hat and The Way West at Steppenwolf, Sita Ram for the Chicago Children's Choir, Working: The Musical at The Broadway Playhouse, Richard III at Chicago Shakespeare Theater and Arabian Nights at Lookingglass Theater. Regional credits include Native Gardens at The Cincinnati Playhouse, Harvey at Milwaukee Repertory Theatre, Why Torture is Wrong, and the People Who Love Them at Forward Theater Company and Blood and Gifts at The Lincoln Center in New York. He can also be seen as Dilip Singh in both seasons of Boss on the Starz Network.

Sandra Marquez (Frida) is an actor, director and educator, as well as a longtime ensemble member and former Associate Artistic Director (1998-2006) of Teatro Vista. Earlier this season she played Clytemnestra in Court Theater's production of Electra. Last spring she joined the ensemble of Steppenwolf Theater where she most recently appeared in the world premiere of Mary Page Marlowe by Tracy Letts. As an actor Marquez has worked at respected venues in Chicago and beyond including the Goodman, Steppenwolf, Victory Gardens, the Oregon Shakespeare Festival, Madison Repertory and New York's off-Broadway house, Second Stage Theater, Uptown. Next summer she will play Clytemnestra in Iphigenia at Aulis for the remount of Court's production at the Getty Villa in California. Film and TV credits include The Big Bang Theory, Chicago Code, Boss, Chicago Med and Timer. She has been a member of the theater faculty at Northwestern University since 1995. As a director, Marquez' credits include Teatro Vista's production of Breakfast, Lunch and Dinner by Luis Alfaro and the critically acclaimed production of Our Lady of the Underpass by Tanya Saracho, which went on to receive a Jeff nomination for best production. More recently she directed Manana Comes (Chicago premiere) by Elizabeth Irwin (Teatro Vista), and Men on the Verge of Hispanic Breakdown by Guillermo Rodriguez (Pride Films and Plays).

Ayssette Muñoz (Miranda), selected by the Chicago Tribune's Chris Jones as one of 2015's "Top 10 Hot New Faces of Chicago Theatre," is an artistic associate at Teatro Vista, where her credits include Maria Teresa in In the Time of the Butterflies, Amparo in Between You, Me & The Lampshade, Juliet in Romeo and Juliet and Catherine in A View from the Bridge. Other local credits include Adriana in The Comedy of Errors (Notre Dame Shakespeare Festival), Hope in Urinetown (Thirteen O'Clock Theatre), Juliet (u/s) in Romeo and Juliet (Chicago Shakespeare Theater), Marisol in the staged reading of Marisol (Goodman Theater Latino Festival), and an episode of Chicago PD.

Bear Bellinger (Nunley) is making his Teatro Vista debut. He has been seen in Chicago productions with The Inconvenience, The Hypocrites (The Adding Machine), Chicago Children's Theatre (Mr. Chickee's Funny Money), Paramount Theatre (Miss Saigon) and Court Theatre among others. 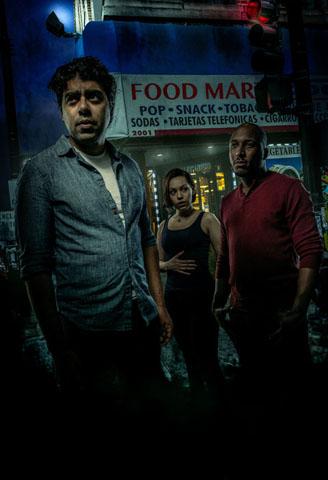 Teatro Vista founded in 1990 by Edward Torres and Henry Godinez. As Teatro Vista's first Artistic Director, Godinez guided the company during the formative years. He helped stage successful productions and establish vital relationships with other theatre companies and artists. When Godinez stepped down, Torres was appointed Artistic Director. Under Torres' direction, Teatro Vista used the stage to engage, connect and challenge audience members using the company's mission as his guide. In 2012, Torres moved to New York and the Board of Directors promoted longtime Associate Artistic Director Ricardo Gutiérrez to the position of Executive Artistic Director.