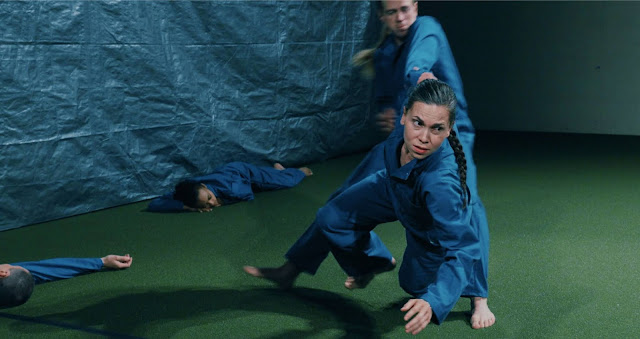 Shiau sites the seed of this work as witnessing the establishment of..."re-education camps," referred to by some as concentration camps, to forcibly contain Uyghurs, Kazakhs, and other traditionally Muslim minority groups in China’s Xinjiang Autonomous Zone. From her perspective, the insufficient effort and failure by world leaders to recognize and condemn this violent act leads to the necessity of the piece. Her hope for this work is to raise awareness of this humanitarian crisis.

“As a Taiwanese woman who grew up seeing her own country constantly dismissed and silenced on the international stage due to pressure from the Chinese government, I am inspired to speak out against the Chinese government’s current efforts to silence and erase the Uyghur and Kazakh Muslims' cultural identity,” says Shiau. “Of course, I will never be able to fully understand the pain of the Uyghurs and Kazakhs, but I'd like to use my voice as an artist to draw attention to these issues and encourage people to take action.”

Greener Grass will premiere on June 24, 2021 at 7:30pm and will have additional screenings on June 26 at 7:30pm and June 27 at 2pm. The performance will be live streamed on Vimeo and will include a post-show Q&A. Admission is free, find out more and register at hubbardstreetdance.com.  Registration opens June 11.

Jie-Hung Connie Shiau was born in Gainesville, Florida, U.S.A., and raised in Tainan, Taiwan. She moved to the United States to further her dance education and pursue a professional dance career at the age of 18. She received her BFA in dance from SUNY Purchase Conservatory of Dance. Shiau has worked as a collaborator with an array of companies including Hubbard Street Dance Chicago, Kyle Abraham / Abraham.In.Motion, Gallim Dance, Helen Simoneau Danse, MeenMoves, Adam Barruch Dance, and The Kevin Wynn Collection. She has performed works by

In addition, Shiau was a recipient of Chicago Dancemaker Forum Greenhouse Artist in 2019, New Choreographer Project in Taipei, Taiwan in 2019, Dance Magazine’s “25 To Watch” in 2018, Honorable Mention for Jadin Wong Award for Emerging Asian American Dancer in 2014, and Reverb Dance Festival Dancer Award in 2014.

Hubbard Street Dance Chicago’s mission is to bring artists, art and audiences together to enrich, engage, educate and change lives through the experience of dance. HSDC is committed to keeping its dancers creating and finding innovative ways to share exceptional contemporary dance with the community. Now under the artistic direction  of Linda-Denise Fisher-Harrell, Hubbard Street Dance Chicago grew out of the Lou Conte Dance Studio in 1977, and Conte served as Artistic Director for 23 years. Hubbard Street offers extensive Education and Adaptive Dance Programs to ensure that residents in every neighborhood of Chicago have access to the benefits ofdance. Visit hubbardstreetdance.com for more information.

Posted by Bonnie Kenaz-Mara at 3:16 PM No comments: