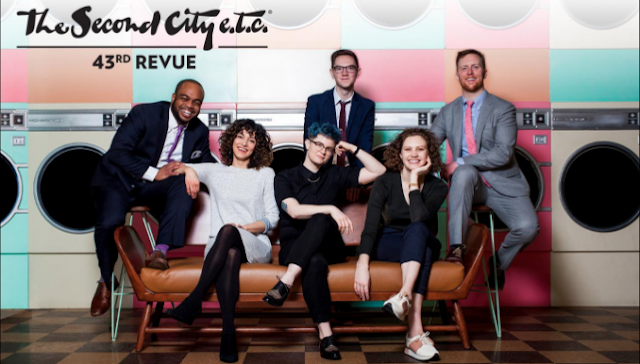 I'll be out for the press opening April 13th, so check back soon for my full review.

About the Artists
ATRA ASDOU (Ensemble; Pronouns: She/Her/Hers) is a home-grown Chicago performer. Some of her TV credits include South Side (Comedy Central) Chicago Med, and Chicago P.D. (NBC). She stars in the award-winning comedic web series Other People’s Children, is an artistic associate at Lookingglass Theatre, contributes weekly satire to The Paper Machete, wrote and performed her solo sketch show A Poodle in People Clothes and directed the critically acclaimed sketch show Teen Cudi Presents: Black Boy Joy. She improvises regularly at iO Chicago with Lil' Tooties and Whirled News Tonight. At The Second City, Atra has understudied for the e.t.c.’s 40th revue A Red Line Runs Through It, performed in Second City's She The People at Woolly Mammoth Theatre in D.C. and is a 2017 Bob Curry Fellowship recipient. Special thanks to Gary Pascal, Kela, and this outstanding cast and production team.

E.J. CAMERON (Ensemble; Pronouns: He/Him/His) is very excited to be a part of this show. He's lived in Chicago for six years, where he has graduated from and performed at The Second City, iO, Comedy Sportz. He was a recipient of The Second City Training Center’s Bob Curry Fellowship in 2016. Before moving to Chicago, E.J. received his BFA in Acting at Columbus State University (not Ohio!) and performed with multiple troupes. He is represented by Paonessa Talent and is an avid pro-wrestling fan who loves the color purple. Follow @Ej_Cam19.

MARK CAMPBELL (Ensemble; Pronouns: He/Him/His) is so grateful to be a part of The Second City! Originally from Glen Ellyn, he has performed all over the country with The Second City Touring Company and all over the ocean aboard the Norwegian Dawn and Gem. Mark is a member of The Improvised Shakespeare Company and is proudly represented by Paonessa Talent. Huge thank yous to his family, and he hopes Smitty is proud. Follow him on Twitter @themarkcampbell!

ANDREW KNOX (Ensemble; Pronouns: He/Him/His) is originally from Shelburne, Vermont. An ensemble member in the e.t.c.’s 41st and 42nd revues, Fantastic Great Super Nation Numero Uno and Gaslight District, Andrew is also a Second City Touring Company alum and a member of the Improvised Shakespeare Company. He’d like to thank the many teachers, coaches, and directors he’s had over the years, as well as Mom, Dad, Amanda, Tyler, and his incredible wife Catherine for their unending love and support. And also his dog, Izzy, who is too young to see his shows. Follow him on Instagram and Twitter @softknox.

LAUREL KRABACHER (Ensemble; Pronouns: She/Her/Hers) is very happy to be a part of The Second City! A Second City Touring Company alum, she is a Colorado native and a theater graduate of the University of Northern Colorado. If you want more Laurel, you can see her at CIC with Little Gary and at iO with Tone and Revolver. She is represented by BMG Talent.

CHUCK NORMENT (Ensemble; Pronouns: They/Them/Theirs) hails from Newport News, Virginia. They can also be seen performing at iO with Virgin Daiquiris, Your Fucked Up Relationship and Meridian. Chuck was a featured performer in The Second City and NBCUniversal's Break Out Comedy Festival in 2016. They are a proud alumni of Second City’s National Touring Company (BlueCo will forever be the best co). They are single as hell, so slip into their DMs on Instagram @masculinehair.

ANNELIESE TOFT (Director; Pronouns: She/Her/Hers) returns to direct her second resident stage production for The Second City after regularly contributing as a director for Second City Theatricals. Her recent projects include The Second City e.t.c.’s 42 revue Gaslight District, Fast, Loud, & Funny at UP Comedy Club, The Second City’s collaboration with the Lyric Opera of Chicago, Longer! Louder! Wagner! and a four-year tenure with The Second City Touring Company. She also directs sketch comedy in venues all over Chicago, including the Annoyance, Theater Wit, Stage 773, The Public House Theatre, and iO.

JACOB SHUDA (Original Music, Sound Design, Musical Director; Pronouns: He/Him/His) is a moon worshiper from Wisconsin.  He started live-scoring improv when he was 16 years old, and since has traveled the world with The Second City Touring Company. This is his sixth resident stage revue. Outside of Second City, catch him leading the synth dance rock band Veil Surfer.

LAURA HUM (Stage Manager; Pronouns: She/Her/Hers) is thrilled to be a part of the e.t.c.’s 43nd revue, which is her fifth resident stage production with The Second City. Previous credits on this stage include Gaslight District, Fantastic Great Super Nation Numero Uno, A Red Line Runs Through It, and Soul Brother, Where Art Thou? She is an alumna of the Ohio State University and The Second City Touring Company.

Posted by Bonnie Kenaz-Mara at 10:39 PM No comments: