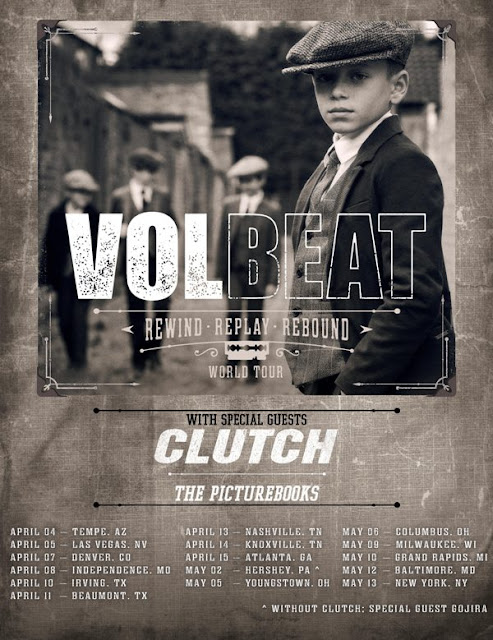 Clutch announce April and May 2020 US tour dates as Special Guest of Volbeat’s Rewind Replay Rebound World Tour. The first leg of the tour starts on April 4th in Tempe, AZ at 98KUPDUFest and finishes April 15th in Atlanta, GA. The second leg of the tour starts May 5th in Youngstown, OH and ends in New York, NY on May 13th. The Picturebooks open each show.

Clutch has some interesting history with Volbeat. Back in 2011 Clutch successfully supported Volbeat on their mainland European dates. Most recently Neil Fallon was invited by Michael Poulson to share vocal duties on Volbeat’s recording of the track “Die To Live” and to join the band at the video shoot for the song in Boston, MA.

“It’s a catchy straight-ahead rocker of a song and I am flattered to have been asked to participate” says Neil Fallon. Tim Sult very favorably remembers the 2011 tour with the band. “We had such a great time touring Europe with both Volbeat and The Picturebooks, it was only natural that we do it in the US.”

Tickets go on sale Friday, January 17th at 10 AM EST via www.pro-rock.com.

^ Special guests Gojira & The Picturebooks; Clutch will not be supporting on this date

For more information, check out the band’s website:
www.pro-rock.com