ChiIL Live Shows on our radar
The Gift Theatre Presents
DOUBT: A PARABLE

The Gift Theatre is pleased to launch its 18th season with a revival of John Patrick Shanley’s Pulitzer and Tony Award-winning drama DOUBT: A PARABLE, presented as a part of Steppenwolf’s LookOut Series. Directed by Ensemble Member John Gawlik and featuring an all-ensemble cast, DOUBT will play February 27 – March 31, 2019 at Steppenwolf’s 1700 Theatre, 1700 N. Halsted St. in Chicago. Tickets are currently available at steppenwolf.org through Steppenwolf Audience Services (1650 N. Halsted St.) or by calling (312) 335-1650.

In this brilliant and powerful drama, Sister Aloysius, a Bronx school principal, takes matters into her own hands when she suspects the young Father Flynn of improper relations with one of the male students. Winner of the 2005 Pulitzer Prize and Tony Award for Best Play. 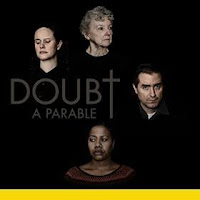 About the Artists
John Patrick Shanley (Playwright) is the author of numerous plays, including Danny and the Deep Blue Sea, Dirty Story, Four Dogs and a Bone, Psychopathia Sexualis, Sailor’s Song, Savage in Limbo and Where’s My Money?. He has written extensively for TV and film, and his credits include the teleplay for Live from Baghdad and screenplays for Congo, Alive, Five Corners, Joe Versus the Volcano (which he also directed) and Moonstruck, for which he won an Academy Award for original screenplay.

John Gawlik (Director) is an AEA/SAG actor and director. Favorite acting credits include: the world premiere of David Rabe’s Good For Otto and Broadsword with The Gift Theatre, Bill Sykes in Oliver at Drury Lane, Blizzard ‘67 with Chicago Dramatist, The Lonesome West and Beauty Queen of Lennane with the Gift Theatre and A Skull in Connemara at Northlight. Favorite directing projects include Thinner Than Water and The Royal Society of Antarctica for The Gift Theatre and the Chicago Premiere of When the Rain Stops Falling at Circle Theater (Jeff Award for Director and Production). He is an ensemble member of The Gift Theater.

About The Gift Theatre
Since 2001 and over 70 productions, The Gift Theatre has pioneered the frontiers of the American theatre via the most intimate professional Equity theatre in the country, leading to national acclaim and a cultural revolution on Chicago’s northwest side.

About Steppenwolf’s LookOut Series
Housed primarily in the 1700 Theatre, LookOut is Steppenwolf’s performance series that presents the work of artists and companies across genre and form: emerging artists and performance legends, quintessential Chicago companies and young aspiring ensembles, familiar Steppenwolf faces and new friends. Greta Honold and Patrick Zakem are the producers for LookOut, which is presented year-round and announced on an ongoing basis. For more information, visit steppenwolf.org/lookout.