OPENING: NEW She the People: The Resistance Continues at Second City 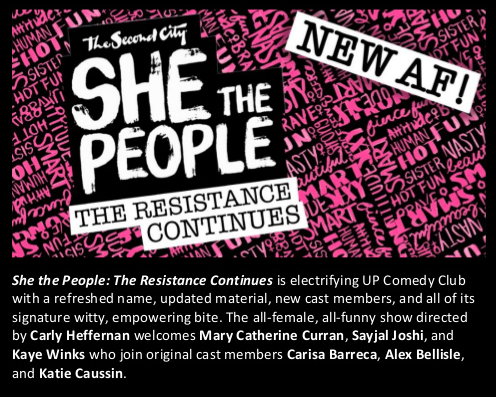 I'll be ChiILin' with Chi, IL's infamous Second City for the relaunch of The Second City's She The People: The Resistance Continues on March 14th, so check back soon for my full review. She The People is one of my favorite Second City shows to date and I can't wait to see the new material they've added. The women of She the People are breaking ceilings and taking names. If you've heard the old cliche that feminists are humorless, you'll never believe it again. This show is fierce, funny and unapologetically feminist. You'll never look at advertising, pop culture, and dating quite the same way again. Don't miss this!


Bonnie Kenaz-Mara (AKA: ChiIL Mama) and Chicago artist, Kathy Blankley Roman, ChiILin' at the press opening of Chi, IL's She The People, January 2018. 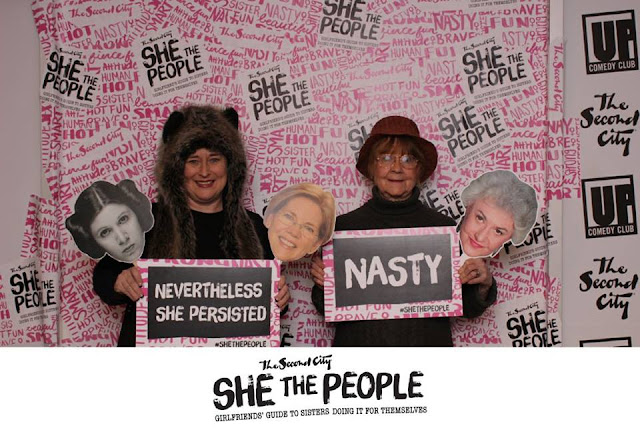 “The Second City has never been lacking for new material, and just like entertainment juggernaut Blue Man Group or the most recent tour of Miss Saigon, art must evolve to stay true and relevant and inspiring to its audience,” said Second City CEO and Executive Producer Andrew Alexander. “People coming back to She the People for the second or third time will be delighted to see that about half of the show is brand new.”

"Our goal is, and always has been, to satirize the woes of being a woman in this wild world while also empowering the audience to take a stand and make real change. The show bounces around everything our writing team knows are hot button topics these days--dating, body positivity, motherhood, and what might prove to be the most important election of our lifetime. It's a call to action bundled up inside a party, and we're all proud to be part of it." says director and head writer Carly Heffernan.

She the People first hit The Second City in September 2017. After its smash run in UP Comedy Club, the show brought its tour-de-female-force to Woolly Mammoth Theatre Company in Washington, DC, where it earned a Helen Hayes award nomination and became the highest grossing show in the theatre’s history. “It’s a fast-paced, wild ride of a show that throws off sparks,” said MD Theatre Guide. DC Metro called the show “a dip into the often hilariously unbelievable or absurd situations that women– queer women, women of color, plus-sized women– find themselves in on a daily basis, and it does so not just playfully, but with a deep intelligence and purpose that never veers into the pedantic.”

The show schedule is as follows:

About the Artists
CARISA BARRECA (Ensemble/Assistant Director/Choreographer) is thrilled to be a part of She the People. She is an alumna of The Second City's e.t.c. stage, where she wrote and performed in three critically acclaimed revues. She has had the honor of performing at Lyric Opera of Chicago
with Sir Patrick Stewart and Renée Fleming in The Second City's Guide to the Opera, at Goodman Theatre and the Kennedy Center with Twist Your Dickens and wrote and performed in Hubbard Street Dance Chicago and The Second City's collaboration The Art of Falling. Follow her @Cinderisa.

ALEX BELLISLE (Ensemble) is thrilled to be working on She the People! A Chicago-based actress and comedian, Alex is one-half of the improv and sketch duo Girlish, which has performed its self-titled show around the country, including at the New York International Fringe Festival. Other credits include The Best of The Second City, Feminine Wilds, PANTS!, No Selfie Control and Just Being Honest. Alex can be seen performing with various improv groups around Chicago, including Gone Gone at The iO Theater.

KATIE CAUSSIN (Ensemble) is originally from Springfield, VA, and received her degree in Theater from Radford University. She has been an actor in Chicago for over 20 years, many of them with The Second City as part of their Touring Company and Theatricals shows. Most recently, she returned from a month-long run of She the People at the Woolly Mammoth Theater in Washington, D.C.  Previously, she appeared as Mrs. Cratchit in Twist Your Dickens at Goodman Theater and toured around the US in The Realish Housewives of (Your City Here). Katie has also performed with Second City for the USO in the Balkans and at both the iO and Annoyance theaters in Chicago. On camera, Katie has appeared in an episode of Chicago Justice on NBC and has been featured on the Onion Network’s Special Report webseries.

MARY CATHERINE CURRAN (Ensemble) is so excited to join this cast of badass women! MC studied Theatre Performance at the University of Maryland and trained at The Second City Conservatory and iO Theater in Chicago. She has improvised, written, performed, and directed shows all over Chicago, at the Annoyance (Steamworks, Bite Size Broadway, Burlesque is More) and iO (Virgin Daiquiri, Lil' Tooties, One Woman Space Jam). MC just finished the debut run of The Second City's Love Factually at the Kennedy Center in Washington, DC. Follow @itismarycatherine on Insta and @yomarycatherine on Twitter for great content.

KAYE WINKS (Ensemble) is #blessed to be alongside the fabulous ladles of She the People! Kaye trained with the Moscow Art Theater. She recently performed her hit solo show TOKEN to sold-out audiences at The Second City Training Center and toured it to UCB LA, Out of Bounds Comedy Festival, and United Solo Theater Fest In NYC. She is proudly repped by Shirley Hamilton and NV Talent.

CARLY HEFFERNAN (Director/Head Writer) is an award-winning alumna of The Second City
Toronto, where she wrote and performed in four Mainstage revues. She recently co-wrote the hit show The Second City Guide to the Symphony and toured with it across Canada and the United States. She directed the critically acclaimed Second City Toronto Mainstage revue Come What Mayhem!, as well as for The Second City Touring Company and several Norwegian Cruise Line shows. Carly currently writes for Second Jen (City TV), The Irrelevant Show (CBC Radio) and Air Farce Canada 150 special (CBC).

MARY MAHONEY (Music Director/Original Music/Sound Design) is thrilled to be working with the talented women of She the People. Mary has worked as a Musical Director for sketch and improv comedy all over the continent while touring with Second City Theatricals aboard the Norwegian Dawn and with The Second City Touring Company. A former music faculty member of Western Washington University, she is now a proud faculty member at The Second City Training Center.

ABBY BEGGS (Lighting Design) is excited to be joining The Second City on this show. When she's not in the booth at The Second City, she can be found stage managing, directing, and composing music for theater around town. Stage management credits include: L’enfant et les Sortilèges, L’incoronazione di Poppea (Roosevelt University), The Out of Tooners (Off-Color Theatre Company}, Gallo (Guerilla Opera), Blue Window (Brown Box Theatre Project), The Scene, Good People, and Barefoot in the Park (Dorset Theatre Festival), among others.

Email ThisBlogThis!Share to TwitterShare to FacebookShare to Pinterest
Labels: comedy, feminist, FEMINIST COMEDY, opening, revamped, She the People, She the People: The Resistance Continues, shows on our radar, The Second City, Theatre Chicago, Up Comedy Club
Older Posts Home
Subscribe to: Posts (Atom)