Savannah, Georgia road warriors BLACK TUSK are kicking off a North American tour tomorrow in Broussard, LA with Down and Haarp. This run of shows goes through May 25th in Memphis, TN at the New Daisy Theater.

Following the dates with Down, BLACK TUSK will be joining Municipal Waste's headlining tour, which will also feature special guests 3 Inches of Blood. The dates with Municipal Waste begin May 27th in Wilmington, NC and wrap up June 26th in New York, NY. 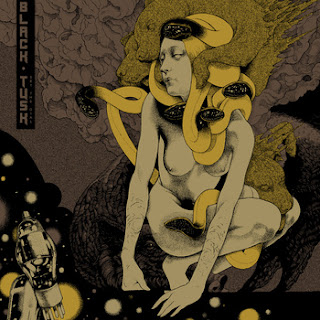 BLACK TUSK is currently streaming Set The Dial at this location. The album is available for purchase via Relapse.com here and iTunes here. 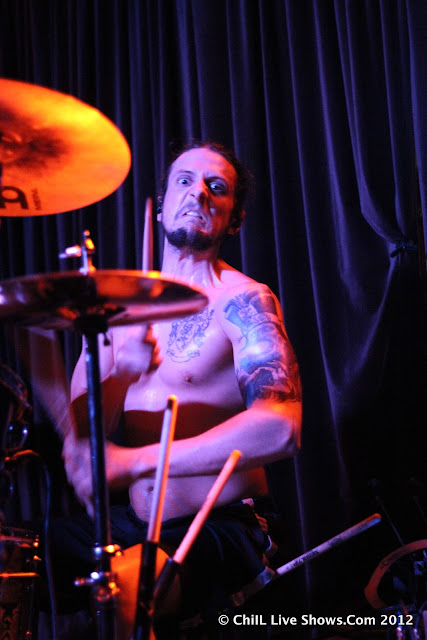 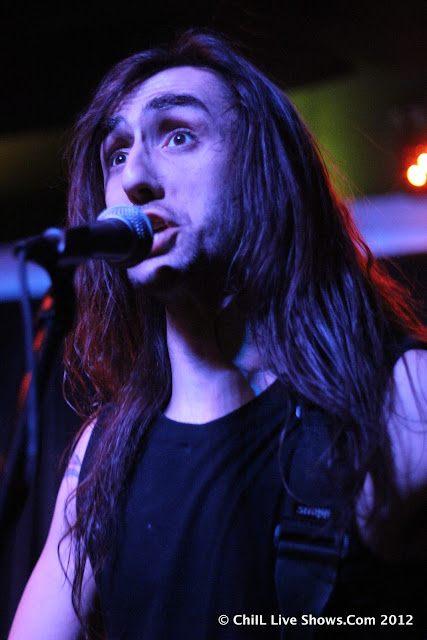 We caught up with Revocation at tiny but mighty Ultra Lounge in Chicago in April of 2012.    They bring it on stage with a vengeance, and leave the fans loudly chanting "One more song!"    These boys are ones to watch.  We saw them open for Eluveitie at Bottom Lounge a couple months before that, in February, and it was great to catch them playing a longer set as headliners.   Cannabis Corpse provided support. 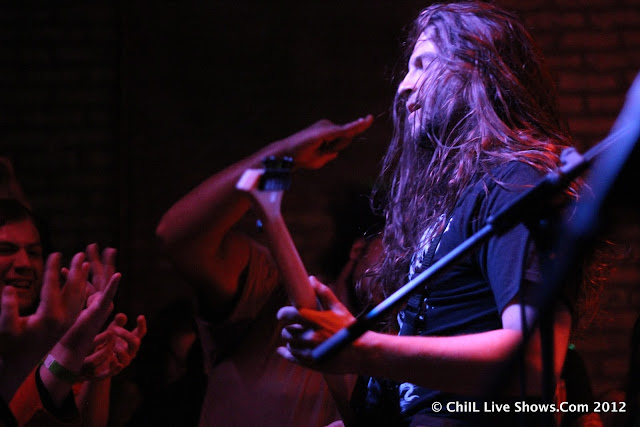 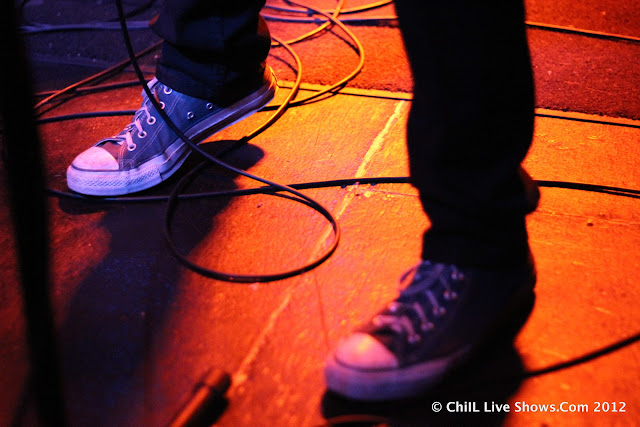 After the show, ChiIL Live Shows got an exclusive video interview with the guys.  They're unpretentious, friendly, and quick with the come backs.    If metal doesn't pan out, these guys are a shoe in for the comedy circuit.   It's one of the most amusing interviews we've done recently.  I seriously wanna throw these guys on a tour bus with Red Fang and shoot a reality show! 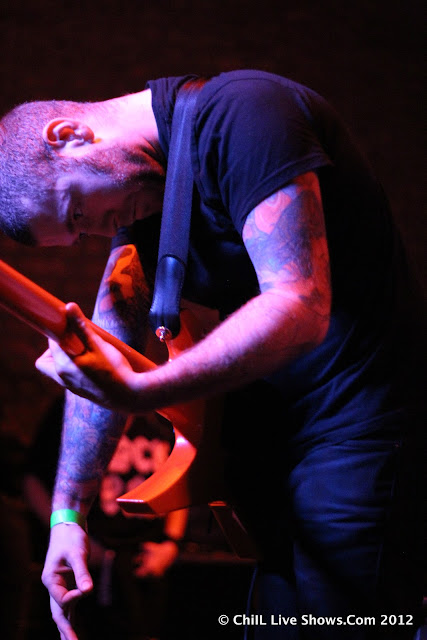 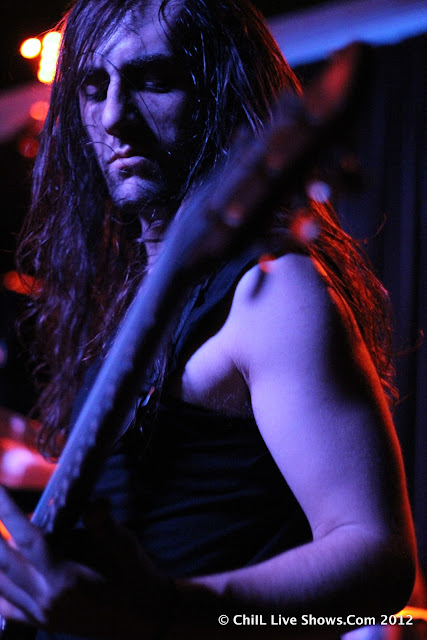 For the time being, they're traveling the country in a van that keeps trying to kill them.  So far this year, when they've come through Chi-Town, they've rocked Bottom Lounge, Ultra Lounge, Reggie's Rock Club, and Cobra Lounge so who knows where they might show up next! 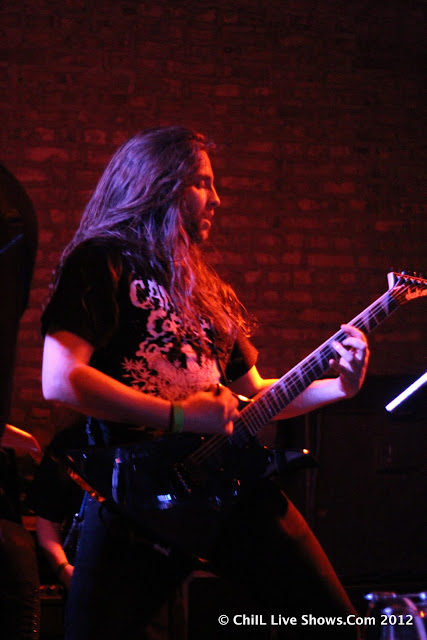 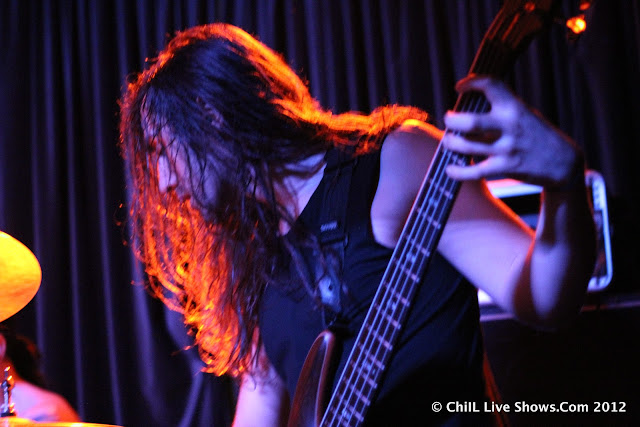 Come on back to ChiIL Live Shows like we vote in Chi, IL...early and often, and you'll be one of the first to know where they're heading.   If metal's your medicine, check 'em out.  Highly recommended!
Posted by Bonnie Kenaz-Mara at 5:45 PM No comments:


REVOCATION recently released their video for the track "No Funeral" from their brand new album Chaos of Forms. The clip was lensed with acclaimed director David Brodsky of MyGoodEye NYC (Municipal Waste, The Black Dahlia Murder, All That Remains, Devin Townsend Project). 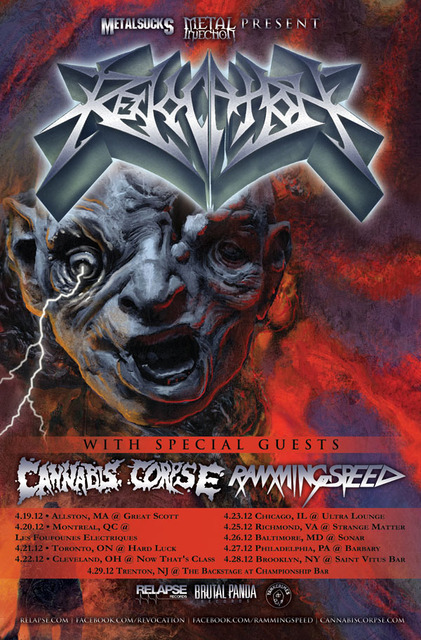 Massachusetts shredders REVOCATION are on the road on their first North American headlining tour.  Fresh off their recent tour with Children of Bodom, the band will start their trek Allston, MA and run through April 29th in Trenton, NJ.  Support on the tour will come from Cannabis Corpse and Ramming Speed.  A complete list of dates can be found below.

"What's up guys, just wanted to let everyone know that our headlining tour is here, so make sure to come check us out if we're rolling through your area. We can't wait to play a longer set filled with songs spanning all of our records. We're also very pleased to bring out Ramming Speed and Cannabis Corpse on this run, it's going to be a rager every night for sure.  Looking forward to getting ripshit in a city near you!"

In more REVOCATION tour news, the band will be hitting the road with DYING FETUS and Six Feet Under and Six Feet Under on the "18 Nights of Blood Tour". The tour starts June 8th in Atlanta, GA and will wrap up June 29th in Tampa, FL. Dates are listed below. The band will be keeping everyone up to date on all the mayhem on the road with their new tour blog on Metal Underground.

"Hey all thanks so much for coming out and raging with us for the past 5 weeks on the Children of Bodom, Eluveitie and Threat Signal tour! It was a wild ride, and we're sad to see it pass. But we are beyond psyched to now announce our headlining run in April with Cannabis Corpse and Ramming Speed. Expect a longer set with some new tracks and some old classics. These shows are gonna kill, see you there!!"

REVOCATION's Dave Davidson also recently posted an exclusive guitar lesson for Chaos of Forms track "Cradle Robber" online at JamPlay.com. Davidson is one of the newest teachers at JamPlay.   A 5-minute demo of his new lesson can be viewed now at YouTube.

Boston, MA trio Revocation is comprised of vocalist/guitarist David Davidson, vocalist/bassist Anthony Buda, and drummer Phil Dubois-Coyne — all of whom showcase incredible dexterity at their chosen instruments, even by heavy metal standards, and came together as a group in 2005. Armed with a super-technical thrash/death metal style prizing virtuosity as much as heaviness and aggression, the group soon began attracting A&R men from numerous labels with their self-released Summon the Spawn EP (2006) and Empire of the Obscene album (2008). They eventually decided to sign with Relapse Records, and delivered their second full-length, Existence Is Futile, in September 2009, also to very positive reviews.   Buy/Download Chaos of Forms and Revocation's past 2 CDs here.