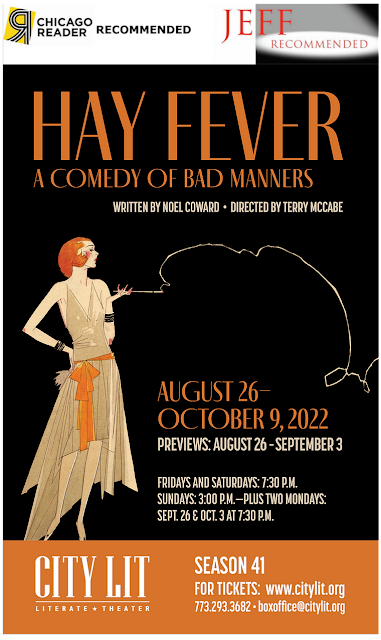 In the microcosm of Chicago's theatre scene, it's amazing how many synchronicities there are. Just one week after reviewing Hay Fever, I'll be out to see yet another Noël Coward play, Private Lives, opening at Raven Theatre. It's exciting Chicago audiences can do a mini immersive in Coward's period pieces with City Lit's Jeff Recommended Hay Fever from 1924 and Private Lives from 1931. His artsy, eccentric, manipulative characters are delightfully funny. Horrible humans behaving badly are eternally timeless yet timely.

Prior to Hay Fever, my most memorable Noël Coward experience was a 1985 college production of Blithe Spirit at Anderson University in Indiana, where the not so ethereal ghost was a plus sized actress who fell through the stage staircase mid act! They had to stop the play and help extricate her from the rubble. Thankfully she wasn't injured and the audience was patient and understanding about the whole debacle.

Conversely, City Lit's Hay Fever went off without a hiccup and was an immensely enjoyable night out. We laughed at much of the dialogue and wacky plot twists and were well entertained. Betsy Pennington Taylor was a standout as narcissistic actress, Judith Bliss, and marssie* Mencotti was an absolute hoot as the housekeeper, Clara. The entire cast did some lovely ensemble work with impeccable comedic timing. Shout out also to Ray Toler for the charmingly hilarious scenic design. I'm still laughing at the boar head with ear tassels!

Hay Fever's nothing to sneeze at, though this country escape gone wrong may have you laughing so hard your eyes water. If you're itching for a fun production, the foibles of the Bliss bunch are comedic gold.

Producer and Artistic Director Terry McCabe will direct Noël Coward’s 1924 comedy HAY FEVER as the final production of City Lit Theater’s 41st season. It replaces the previously announced AZTEC HUMAN SACRIFICE, which has been moved to a slot in spring 2023. Both a comedy of manners and a farce, HAY FEVER has been proven to be exceptionally durable in the nearly 100 years since its first production, enjoying many successful revivals in the US, UK and Canada as well as multiple film and TV productions across the globe. The comedy lampoons the poor manners and deficient hospitality of the four members of an eccentric upper class English family, who each without the other three knowing it have invited a guest to spend the weekend at their country estate.

McCabe’s cast will include Betsy Pennington Taylor as Judith Bliss, the absent-minded retired actress who is the wife and mother of the bad-mannered hosts; and Stephen Fedo (he/him) as Judith’s novelist husband David Bliss. Their children will be played by Travis Shanahan (he/him) as Simon, and Lizzie Williams (she/her) as Sorel. Appearing as the Bliss’s guests will be Robert Hunter Bry as Judith’s fan Sandy Tyrell, Elizabeth Wigley (she/her) as the vampish Myra Arundel, Melissa Brausch (she/her) as the dim but good-hearted flapper Jackie Coryton, and Gerrit Wilford as diplomat Richard Greatham. marssie* Mencotti will be the housekeeper Clara. 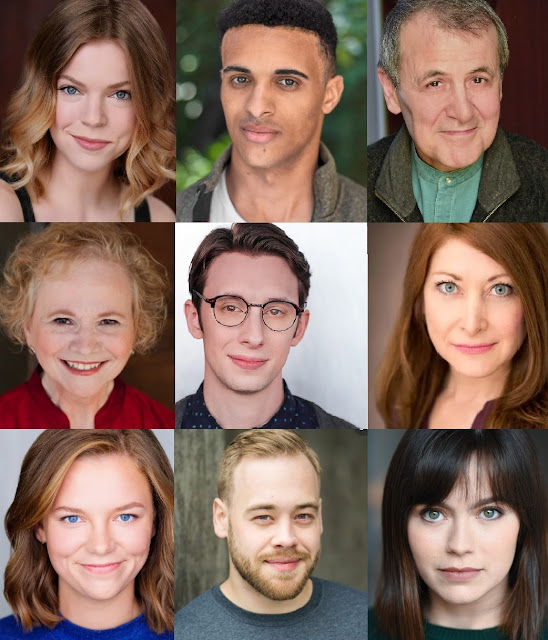 Noël Coward's masterpiece. The four members of the eccentric Bliss family have each, without the other three knowing it, invited a guest to spend the weekend at their country estate. But the Blisses wouldn't be successful hosts to one visitor; confronted with four, they put their guests through their self-absorbed version of hospitality, utterly oblivious to the train wreck they've engineered. An irresistibly heartless comedy.

Noël Coward (Playwright) was an English playwright, composer, director, actor, and singer, known for his wit, flamboyance, and what Time magazine called "a sense of personal style, a combination of cheek and chic, pose and poise.”  Coward achieved enduring success as a playwright, publishing more than 50 plays from his teens onwards. Many of his works, such as HAY FEVER, PRIVATE LIVES, DESIGN FOR LIVING, PRESENT LAUGHTER, and BLITHE SPIRIT, have remained in the regular theatre repertoire. He composed hundreds of songs, in addition to well over a dozen musical theatre works (including the operetta BITTER SWEET and comic revues), screenplays, poetry, several volumes of short stories, the novel POMP AND CIRCUMSTANCE, and a three-volume autobiography. Coward's stage and film acting and directing career spanned six decades, during which he starred in many of his own works, as well as those of others.

At the outbreak of the Second World War, Coward volunteered for war work, running the British propaganda office in Paris. He also worked with the Secret Service, seeking to use his influence to persuade the American public and government to help Britain. Coward won an Academy Honorary Award in 1943 for his naval film drama IN WHICH WE SERVE and was knighted in 1969. In the 1950s he achieved fresh success as a cabaret performer, performing his own songs, such as "Mad Dogs and Englishmen", "London Pride", and "I Went to a Marvelous Party."

Terry McCabe (Producer, Artistic Director, Director) has been City Lit’s artistic director since February 2005 and its producer since July 2016. He has directed plays professionally in Chicago since 1981. He was artistic director of Stormfield Theatre for four years, resident director at Wisdom Bridge Theatre for five years, and worked at Body Politic Theatre three separate times in three different capacities over a span of 14 years. His City Lit adaptations of HOLMES AND WATSON, GIDGET (co-adapted with Marissa McKown), THE HOUND OF THE BASKERVILLES, SCOUNDREL TIME, and OPUS 1861 (co-adapted with Elizabeth Margolius) were Jeff-nominated. He won two Jeff Citations for directing at Stormfield and has been thrice nominated for the Jeff Award for Best Director, for shows at Court Theatre, Wisdom Bridge, and Victory Gardens. He has directed at many Chicago theatres either long-gone or still with us, as well as off-Broadway at the Cherry Lane Theatre and at Vienna’s English Theatre. His book MIS-DIRECTING THE PLAY has been denounced at length in American Theatre magazine and from the podium at the national convention of The Literary Managers and Dramaturgs of the Americas but has been used in directing courses on three continents and is now available in paperback and Kindle e-book.

For over forty-one years, City Lit Theater has been dedicated to the vitality and accessibility of the literary imagination. City Lit produces theatrical adaptations of literary material, scripted plays by language-oriented playwrights, and original material. City Lit Theater was founded with $210 pooled by Arnold Aprill (at the time the Body Politic Theatre’s box office manager), David Dillon, and Lorell Wyatt on October 9, 1979, and was incorporated on March 25, 1980. There were still so few theatres in Chicago that at City Lit’s launch event, they were able to read a congratulatory letter they had received from Tennessee Williams.

The United States Library of Congress has selected our Civil War Project blog for inclusion in its historic collection of internet materials related to the American Civil War Sesquicentennial. Check it out at citylitcivilwar.blogspot.com.

City Lit is in the historic Edgewater Presbyterian Church building at 1020 West Bryn Mawr Avenue. We are two blocks east of both the Bryn Mawr Red Line stop and the #36 Broadway and the #84 Peterson buses. We are one block west of the #147 Sheridan and #151 Sheridan buses. Divvy bike stations are located at Bryn Mawr & Lakefront Trail, and at Broadway & Ridge at Bryn Mawr. The metered street parking pay boxes on Bryn Mawr have a three-hour maximum duration and are free on Sundays. There are additional details about parking and dining options at www.citylit.org

Posted by Bonnie Kenaz-Mara at 3:07 PM No comments: