Summer Camp Music Festival is COMING!    In the last days before summer music fest season kicks off, ChiIL Live Shows will be featuring a number of artists you can see at this year's SCamp.    We've got original pit photos, live show footage and interviews with headliners and small side stage acts.    All who wander are not lost and sometimes you wander into some of the sweetest jams in the smallest spaces. 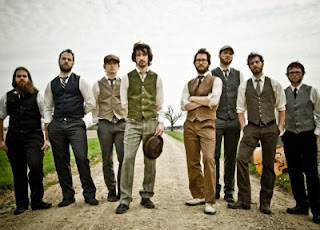 
We just got a Giving Tree Band update from Chicago Bluegrass & Bluesfest.   ChiIL Live Shows gave away free tixs to CBB Fest and shot loads of sweet acts there the last 2 years including Edward Sharpe and the Magnetic Zeros,  Grace Potter and The Nocturnals, David Grisman and many more.   Click the links above for our original photo filled coverage.

The Giving Tree is excited to announce that they have finished recording their fourth studio album, VACILADOR.

The Giving Tree Band will tour the eastern US and Canada this June with celebrated songwriter Joe Purdy, who they met and spontaneously jammed with at CBB Fest earlier this year at the Auditorium Theatre. Each concert will include a full set from The Giving Tree Band followed by a full set of Joe Purdy backed by GTB. The final show of the tour will be at DOUBLE DOOR in Chicago on Friday June 29.
Tickets for this show are on sale now here. It will sell out so please get your tix in advance soon if you plan to attend. Pre-release copies of Vacilador will be available at all the shows on this tour!


Here's the scoop from SCamp:

For brothers Todd and Eric Fink of The Giving Tree Band, there is no distinction between playing music and just plain living. Their bodies and instruments become a singularity that is just trying to get in tune, stay in tune, and add a little harmony to the grand symphony of life.Descending from legendary folk hero Mike Fink and Spanish conquistador Hernando de Soto on their mother’s side, the Finks have extended their brotherhood into an epic collective known as The Giving Tree Band. A band’s band, the Brothers Fink and company live, work, and tour the country together – keeping tune with nature, sleeping under the stars, bathing in rivers, and treating time as the only real currency.

Though the story of The Giving Tree Band is still being written, it can already be said that these musical frontiersmen are redefining “virtuosity,” which is traditionally understood as dizzying displays of technical wizardry. But what is missing from this definition is the root word – Virtue.

And it is upon this foundation of Virtue that The Giving Tree Band weaves their musical tapestry – by playing every note with integrity, every part with humility, every song with honesty, and every show with gratitude.


You could BE THERE instead of just reading about all the fun, after the fact.   Click their main site here for all the delicious details.

They've got an amazing, eclectic line up that crosses musical genres and is sure to be a rockin' good time.   Three Sisters Park in Chillicothe, IL is just 3 hours south west of Chicago.

Also featuring a special Make a Difference performance by Everyone Orchestra