OPENING: STOMP at the Bank of America Theatre #BroadwayInChicago

Get your rhythm on with STOMP. This rockin', world famous show will thaw your frozen soul and provide the perfect excuse to brave the chill and get out of the house. Here at ChiIL Mama, we can't wait to check out this infamous recycled object band gone Broadway touring extravaganza. 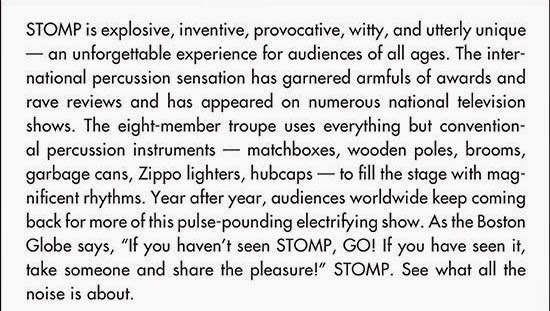 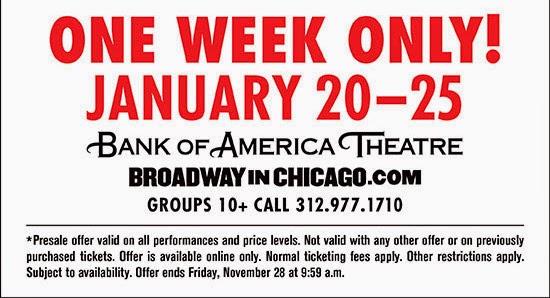 Chicago's Bank of America Theatre hosts the international smash hit STOMP. This famed high-energy show features a cast of eight performers, creating wildly rhythmic sounds with unconventional instruments — everything from brooms and garbage cans to matchboxes and hubcaps and more — and also features plenty of unexpected comedy and audience interaction. A true worldwide phenomenon, STOMP has won both Obie and Drama Desk Awards. Since the first performance in 1991, this thrilling production's played in over 350 cities, earning praise as one of this generation's most mesmerizing theatrical events.


STOMP returns to Chicago by popular demand for a limited one-week engagement at the Bank of America Theatre (18 W. Monroe) January 20 – 25, 2015.  From its beginnings as a street performance in the UK, STOMP has grown into an international sensation over the past 20 years, having performed in more than 50 countries and in front of more than 24 million people.

Created by Luke Cresswell and Steve McNicholas, STOMP continues its phenomenal run with four global productions: the ongoing sell-out production at New York's Orpheum Theatre, a permanent London company, and North American and European tours.  Throughout its life, the show has continued to change by creating new material; next year, it will incorporate two new pieces.  It is safe to say you will never again look at supermarket carts  or plumbing fixtures the same way… or paint cans, or kitchen sinks or…

STOMP, an overwhelming success marked by rave reviews, numerous awards, and sell-out engagements, is the winner of an Olivier Award for Best Choreography (London's Tony Award), a New York Obie Award, a Drama Desk Award for Unique Theatre Experience, and a Special Citation from Best Plays.

In addition to the stage shows, STOMP has been an overwhelming success marked by rave reviews, numerous awards, an Academy Award nomination, four Emmy nominations and one Emmy Award for their acclaimed HBO special Stomp Out Loud, noteworthy TV appearances including The London 2012 Olympic Games Closing Ceremony, The Academy Awards (produced by Quincy Jones), Mister Rogers’ Neighborhood, and a series of award-winning international commercials.

The performers “make a rhythm out of anything we can get our hands on that makes a sound,” says co-founder/director Luke Cresswell.  A unique combination of percussion, movement and visual comedy, STOMP has created its own inimitable, contemporary form of rhythmic expression: both household and industrial objects find new life as musical instruments in the hands of an idiosyncratic band of body percussionists.  It is a journey through sound, a celebration of the everyday and a comic interplay of characters wordlessly communicating through dance and drum. 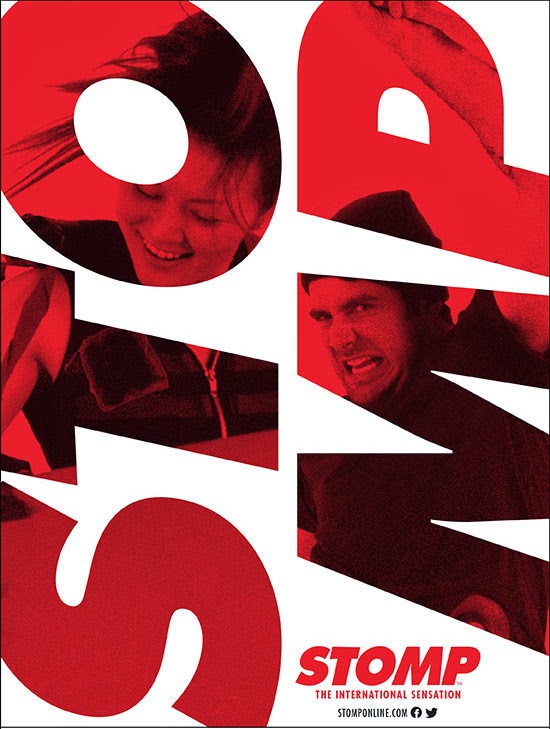 Posted by Bonnie Kenaz-Mara at 10:01 AM No comments:

ACT OUT OPENING: Rock Of Ages at Bank of America Theatre #BroadwayInChicago 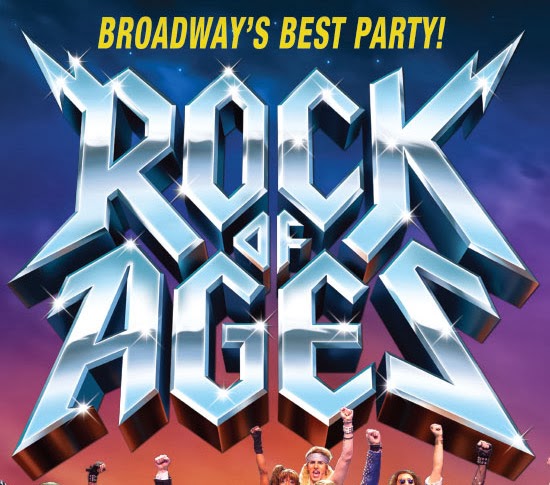 Get your 80's arena rock and hairband fix.  Break out those concert tees (yes, the audience does like to play dress up and we don't mean tuxes and little black dresses).  Here at ChiIL Live Shows we've seen the Broadway touring version of Rock of Ages twice and it's always a rockin' good time!  Yes, Rock of Ages is STILL rollin', but they'll be rollin' through Chicago for one week only, so get your tickets now, while you can.

My tweens still have their lighter shaped Rock of Ages flashlights, that everyone waved in the air, from the last run at Chicago Playhouse. They both totally dug the show.  It's sincere enough to be sweet and kitschy enough to be great fun.  This is the perfect play for rockers who are non-theatre goers, as it's less traditional musical and more of a melding of concert and storyline.  The characters are all too familiar archetypes and the fight the power, gentrification theme makes this a HAIR for the next generation... the children of the flower children.


If you're thinking of bringing the kids, do note there is language and some mature situations (pole dancing, mild sexual content) but it's all fairly tame and appropriate for tweens and up.

Click here to check out some of our past Rock of Ages reviews and coverage.

Broadway In Chicago is pleased to present the smash-hit ROCK OF AGES. The show returns to Chicago for a limited one-week engagement at the Bank of America Theatre (18 West Monroe) from March 11 – March 16, 2014.

In 1987 on the Sunset Strip, a small-town girl met a big-city dreamer – and in L.A.’s most legendary rock club, they fell in love to the greatest songs of the ‘80’s. It’s ROCK OF AGES, a hilarious, feel-good love story told through the hit songs of iconic rockers Journey, Styx, REO Speedwagon, Foreigner, Pat Benatar, Whitesnake, and many more.  Don't miss this awesomely good time about dreaming big, playing loud and partying on!

ROCK OF AGES is a worldwide phenomenon with smash hit productions in Stockholm, London, Las Vegas and still rockin' on Broadway, featuring 28 classic rock tunes including “Don't Stop Believin'”, “We Built This City”, “The Final Countdown”, “Wanted Dead or Alive”, “Here I Go Again”, “Harden My Heart”, “Can't Fight this Feeling”, “Renegade” and “I Want To Know What Love Is”.

ROCK OF AGES is directed by Tony Award Nominee Kristin Hanggi (Bare, Pussycat Dolls on the Sunset Strip) and choreographed by Kelly Devine (Jersey Boys – Associate Choreographer).  With a book by Chris D’Arienzo (writer and director of the film Barry Munday), original arrangements by David Gibbs (Counting Crows, Film: That Thing You Do) and the Music Supervision, Arrangements & Orchestrations by Ethan Popp (Tarzan; Europe: We Will Rock You, Mamma Mia).

ROCK OF AGES is produced by PHOENIX ENTERTAINMENT.
For more information on ROCK OF AGES: www.rockofagesontour.com

PHOENIX ENTERTAINMENT (Producer) is an established international theatrical producing and management enterprise founded by long time colleagues Stephen Kane and Michael McFadden. Its mission is to develop, produce and present the very finest in touring Broadway musicals and family entertainment. Throughout their three decades of theatrical success and industry partnership, the Phoenix team has delivered thousands of performances of more than 80 live productions on four continents. Phoenix is currently launching Rock of Ages and all new seasons of their critically acclaimed touring productions of Monty Python's Spamalot and The Color Purple, which follow on the proud touring heels of Gypsy, The 25th Annual Putnam County Spelling Bee and The Pajama Game.  Team Phoenix also represents the Korean language productions of Grease and Fame, both enjoying open-ended runs in Seoul. Under the direction of colleague Ellie Chung, their Singapore based affiliate Phoenix Asia Group brings international booking, producing, presenting, classical-artist management and theatrical investment to the collective production and management capabilities of Phoenix Entertainment. www.phoenix-ent.com