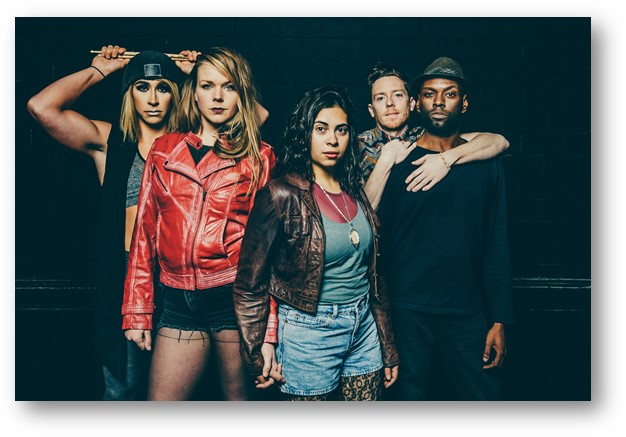 As a rock and theatre lover, I'm super stoked for the opening of A Red Orchid Theatre's next production, 33 to Nothing, which takes place during a real-time band practice! I'll be out for the press performance on Saturday, April 14th, so check back soon for my full review.

Taking place during a real-time band practice, 33 to Nothing is a play that rocks hard and breaks hearts.  Feeling the incessant call of adulthood, individuals begin to question their role in the ensemble. Ultimately begging the question: to break up or to build stronger?  An anthem of forgiveness, loyalty and resilience when your world is being torn by the seams.

“Consider the people that made you feel like THIS is what you were meant to do; whatever THIS is,” notes Artistic Director Kirsten Fitzgerald. “Perhaps it was their love, some mutual admiration, an actual accomplishment or common fight. Grant's honesty, Tyrone's curiosity and their shared relentless compassion make me feel like 33 to Nothing is the current THIS that we were all meant to do. I am so excited for these artists and our audiences alike to consider what they are meant to do and how this shifts throughout our lives.”

About the Artists
GRANT JAMES VARJAS is the playwright and composer of 33 To Nothing. His play Accidentally, Like A Martyr was produced by A Red Orchid Theatre in 2015. His work has also been seen in Chicago as part of Headline Theatre Project 3, Bechdel Fest 2016, and Sick By Seven (A Red Orchid Theatre Incubator). His plays have been produced in New York City (Wild Project NYC; Paradise Factory; Planet Connections Festival) where he was nominated for a GLAAD award for Best Play. Grant has worked extensively developing work and acting with Moises Kaufman's Tectonic Theater Project, and is on the board of Tom Noonan's Paradise Factory Theatre.

TYRONE PHILLIPS (Director) is the founding artistic director of Chicago's Definition Theatre Company, which recently produced the Chicago Premiere of An Octoroon by Branden Jacobs-Jenkins. Directing credits include: the critically acclaimed Byhalia, Mississippi (remounted to open the Steppenwolf 1700 Theatre); Dontrell Who Kissed the Sea (Illinois Theatre); Dutchman (Definition Theatre Company); The MLK Project (Writers Theatre); Amuze Bash (Pavement Group); The Tempest, Lord of the Flies, Our Town, and We the People (Niles North Theatre). Assistant directing credits include: TREVOR the musical, Parade, and The Mystery of Love and Sex (Writers Theatre). Mr. Phillips is a graduate of the University of Illinois Urbana-Champaign. He also studied abroad at Shakespeare’s Globe and was an emerging professional resident at the Milwaukee Repertory Theater, where he worked on A Raisin in the Sun, The Mountaintop, and Clybourne Park. Mr. Phillips was named one of the Chicago Tribune's “Hot New Faces of 2015” and Newcity's “Players 2016: The Fifty People Who Really Perform for Chicago.”

JOHN CICORA (Music Director) has Musical Director/Composition/Programming and or Performance credits in: BlockOut, BSide Studio, Chicagoland, Fly Honey Show, Hit The Wall, The Little Things, Standing Room Only, and A Little Bit Louder Now. Through The Inconvenience he has worked within a variety of processes in order to develop a fluid system of assimilating music into the proper context for the given project. His band, Nootka Sound, focuses on his original compositions and plays regularly in Chicago. He is the Musical Director for The Cooke Book: The Music Of Sam Cooke, as well as a keyboardist/guitarist in the Talking Heads Tribute: This Must Be The Band. He has signed publishing/licensing deals with Penguin Publishing and Warner Bros, and recorded two records with Vanguard Records.

STEVE HAGGARD (Bri/Guitar) – A Red Orchid credits:  3C, Sender, The Mutilated, Accidentally Like A Martyr, The Aliens, Kimberly Akimbo and The Mandrake.  Chicago credits: The Importance of Being Earnest, DOUBT, Old Glory, The Subject was Roses, Our Town (Writers); Tribes (Steppenwolf);  Funnyman, Season’s Greetings and She Stoops to Conquer (Northlight); Wasteland (Timeline);  Alias Grace and Winter (Rivendell); King Lear, As You Like It and Romeo and Juliet (Chicago Shakespeare).  He has worked regionally at Indiana Rep, Milwaukee Rep and American Players Theatre. Steve is an ensemble member of A Red Orchid Theatre.  He is a graduate of The Theatre School at DePaul University and represented by Stewart Talent.

AMANDA RAGUEL MARTINEZ (Tyler/Guitar) is ecstatic to make her Red Orchid Theatre debut! Most recently she was seen at Pasadena Playhouse and Skirball Center in the Hypocrites' adaptation of Pirates of Penzance. Chicago credits include: Cinderella at the Theater of Potatoes, Hypocrites, For the Love Of, Pride Films and Plays, Big Lake, Big City, Lookingglass Theatre Company, As You Like It and Love, Loss and What I Wore, First Folio Theatre, Even Longer and Farther Away, The New Colony, and El Stories: The Holiday Train, Waltzing Mechanics. Regional Credits include: Kitty Hawk, Adrienne Arsht Center, Pirates and The Mikado at Olney Theatre Center, Generation Sex, Teatro Luna.

JEFF KURYSZ (Barry/Drums) makes his A Red Orchid debut. Other Chicago credits include: Support Group for Men (GoodmanTheatre); The Legend of Georgia McBride (Northlight Theatre) Shakespeare in Love (Chicago Shakespeare Theatre) Romeo and Juliet (Backroom Shakespeare Project); Julius Caesar (Brown Paper Box Co.); As You Like It, Much Ado About Nothing (The Arc Theatre); Year of the Rooster, R+J: The Vineyard (Red Theater); Romeo and Juliet (Teatro Vista); One Came Home (Lifeline Theatre); All My Sons (Eclectic Theatre Co.); Amadeus (Boho Theatre); Regional credits include: Richard III,Twelfth Night and The Tempest (Arkansas Shakespeare Theatre). Television credits include Crisis (NBC). He is a graduate of The School at Steppenwolf.

With our 25th season of ambitious and powerful storytelling, we are thrilled to announce the launch of A Red Orchid Theatre’s Red League. At $1k or more, The Red League represents a donor community of our most committed and impactful cultural investors. Every profound and shocking moment on our stage is made possible through their critical annual contributions. Their philanthropic leadership fosters the development of raw and relevant work, creates a platform for our talented ensemble to reach new audiences, and ensures that A Red Orchid Theatre remains a source for honest, compassionate, and aesthetically rigorous theatre.

About A Red Orchid at 25
A Red Orchid Theatre has served as an artistic focal point in the heart of the Old Town community of Chicago since 1993 and was honored last year with a 2016 MacArthur Award for Creative and Effective Institutions. Over the past 24 years, its Resident Ensemble has welcomed into its fold an impressive array of award-winning actors, playwrights and theatre artists with the firm belief that live theatre is the greatest sustenance for the human spirit. A Red Orchid is well known and highly acclaimed for its fearless approach to performance and design in the service of unflinchingly intimate stories. In addition to its professional season, the company is also committed to an OrKids (youth) project and hosts The Incubator (providing artists with space and time to explore new work, new forms and new artistic collaborations).