ACT OUT HOLIDAY: HoliDAZE by Step Up Productions at The Athenaeum Theatre

Step Up Productions presents HoliDaze, a gift-wrapped line-up of original Christmas one-acts showcasing the dysfunctional chaos and joyous celebration the holidays bring.  ChiIL Live Shows will be reviewing opening night.   In the mean time, book your tickets in advance to guarantee your choice of dates.   Theatre tickets make excellent gift ideas that take up little space and make lasting memories. 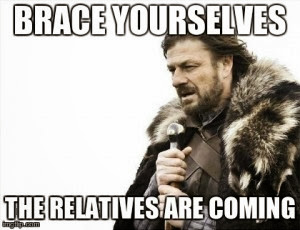 Five talented playwrights explore the holiday season and the experiences of love, happiness, craziness, sadness, magic, anger, loss and disappointment. Join a fool and wench for a light hearted Christmas in a royal palace; an engaged couple wanting to have the best Christmas ever; a family’s experience of loss and larger-than-life love; a first date over coffee with a special gift; and an unexpected visitor on Christmas Eve for this festive line-up that truly reveals the difficulties and joys of relationships during the holiday season.

HELP LOCALLY:
We were so impressed recently with Step Up Productions' fall show, The BenchMark.   It was thought provoking, expertly executed theatre with a social conscience.   They not only raised awareness and compassion for the homeless, they raised money for the homeless, too!  Once again, they will be turning a portion of their profits to philanthropy.   The Winter show will benefit the following:

Step Up Productions will be collecting donations and non-perishable goods for Lakeview Pantry at each performance. Proceeds from HoliDaze will also benefit LINDEN OAKS @ Edward Hospital, which treats Seasonal Affective Disorder.  As part of its mission, Step Up Productions donates a portion of its proceeds to organizations in and around Chicago that support issues often highlighted in its productions.

Christmas is Made for Fools by Lisa Dillman
Directed by Adrianne Cury
Featuring Eric Lynch, Ashley Neal and Nick Polus
A depressed court jester, tasked with creating a holiday pageant for the king, gets a lesson in love and the art of merrymaking from a quick-witted palace wench.

And The Snow Came Down by Tate Geborkoff
Directed by Tara Branham
Featuring Jake Carr, Greg Geffrard and Gina Taliafero
Recently engaged, Stuart and Phillip are busy trying to unite their families during “the best Christmas ever.” In a moment’s reprieve, Stuart and his future mother-in-law, Karen, escape the party and their slow-burning hostility comes to blows over love, marriage, family and Phillip. And the Snow Came Down reflects on how families can lovingly be at each other’s throats with charming rancor and razor wit.

The Intruder by Joshua Rollins
Directed by Laura Hooper
Featuring Elizabeth Antonucci and Connor McNamara
The holidays are a time for family to come together – but what happens when all flights are cancelled and a couple is left to spend the time together – whether their relationship is ready for it or not?  Oh, and there's a squirrel loose in the apartment.  And he's hungry.  And evil.

The Space Behind Your Heart by Steve Simoncic
Directed by Vincent Teninty
Featuring Andy Luther and Amanda Powell
The story of Connor and Sloan, two 40-somethings on a first date brokered by the online dating service, Christian Mingle. A gift is exchanged, an understanding is achieved, and there is a moment of possibility for people simply trying to find a moment of dignity and genuine human connection after life has convinced them that might not be possible.

Benefit Performance:  For Lakeview Pantry and LINDEN OAKS @ Edward Hospital. Includes appetizers, one drink and cash bar.  $30 – no discounts for this performance.

Tickets are available online at www.stepupproductions.org  and www.athenaeumtheatre.org  or by calling The Athenaeum Box Office at (773) 935-6875. Group rates available.

Lisa Dillman is a Chicago-based playwright whose plays have been produced at Steppenwolf Theatre, Actors Theatre of Louisville, American Theatre Company and Rivendell Theatre Ensemble, where she is playwright in residence. She has received new play commissions from the Goodman Theatre, Northlight Theatre, Steppenwolf Theatre, the Chicago Humanities Festival and Rivendell.  Her work is published by Samuel French, Smith & Kraus, Playscripts, Inc., Heinemann and Dramatic Publishing.

Tate Geborkoff is proud member of Chicago Dramatists and the Dramatists Guild of America and has worked as a playwright and poet for over 12 years. Tate’s work is heavily influenced by the Meisner Technique and the study of human behavior. He studied extensively with Amy Morton and at Black Box Acting, where his full-length plays Minotaur and It Rained all Night are used throughout the text analysis courses. Most recently, his poetry was published by Burningword and he participated in the ACT UP! FIGHT AIDS! play festival where his piece, You Haven’t Even Seen My Bad Side Yet, received rave reviews.

Nambi E. Kelley has penned plays for Steppenwolf Theatre, Goodman Theatre, and Court Theatre in Chicago, Lincoln Center in New York, and internationally. Most recently, Kelley returned to Singapore to perform in her co-adaptation of The Book of Living and Dying that will be published in an anthology of plays in Singapore in 2014. Recent playwriting honors include: Goodman Theatre Playwright’s Unit where she penned For Her As A Piano for which she received an award for mental health advocacy, Xtigone (American Theatre of Harlem workshop production) and Harlem 9’s 48 Hours in Harlem Playwright 2013.

Joshua Rollins' play Concealed Carr ywas selected for the 2013 Seven Devils' Playwrighting Conference with ID Theatre.  His play A Girl With Sun In Her Eyes debuted in Chicago in 2011 with Pine Box Theater. It is in development for production in Los Angeles, New Orleans and New York. Other works include American Rex, which premiered with Chicago Street Theatre and was a finalist for the Eugene O'Neill Playwrights Conference; Darlin' which will debut early 2014 in Chicago with Step Up Productions and 25 Saints, which completed a run at Victory Garden’s Greenhouse Theatre in Chicago in 2013 and will be produced in Seattle and LA later this year.  His one acts have been produced by Pine Box, American Theatre Company, the Artistic Home, and many others. Joshua is also an actor and has appeared with companies including The Blue Man Group, Steppenwolf Theatre, The Gift Theatre, About Face Theatre, Commonwealth Shakespeare and the Huntington Theatre. Film credits include Batman: The Dark Knight, Contagion, Living Hell, Killshot, Awake and The Lake House, among others. He is a graduate of the School at Steppenwolf.

Steven Simoncic’s past theatrical productions include Once Upon a Time in Detroit, Broken Fences, Toxic Donut, Maraschino Red, Heat Wave, Water Fight, Words with C, Black Coffee, Day Care, The Space Behind Your Heart, A Moderate Threat, Something Blue and Discovery Channel.  His plays have received productions, readings and workshops at The Goodman Theatre, Victory Gardens Theater, The Second City, Pegasus Players, The Baruch Center for the Performing Arts, Stageplays Theatre New York and The Soho Theatre in London. Steven is currently a resident playwright at Chicago Dramatists and the Writer in Residence at 16th Street Theatre. He has written several short films, been nominated for a Pushcart prize, and has recently won an Emmy.

Lakeview Pantry’s mission is to eliminate hunger in the community by providing food to fill the basic need of hungry people; increasing clients’ independence through self-help initiatives and other innovative programs; and raising awareness of hunger and poverty while working towards solutions to eliminate them.

Step Up became a non-profit, in part, to better serve other non-profit organizations in and around Chicago that are committed to helping others become self sufficient.  As part of its mission, Step Up Productions donates a portion of its proceeds to organizations in and around Chicago that support issues often highlighted in its productions. “The need in our own backyard is tremendous,” comments Founder and Artistic Director Elizabeth Antonucci.  “We believe theatre is a medium that transcends generation, race, social status, ethnicity – and it is our hope that by presenting theatre that portrays authentic stories, we can inspire others to help too.  Giving back to community organizations helps us do our part in helping creating equal opportunities for all.”

The BenchMark
by Richard A. Roberts
Directed by: Tara Branham
Based on a true story, this poignant play chronicles the life of Mark, a charming, eloquent homeless man who calls a lonely, little Chicago park bench his home. As he journeys through the summer, autumn and winter seasons, he seeks solace in alcohol and literature in order to escape the harsh realities of his life and world around him. Combining social commentary, pathos and biting humor, this bittersweet satire is an elegy to the misfit in all of us.

*Proceeds to benefit the Chicago Alliance to End Homelessness 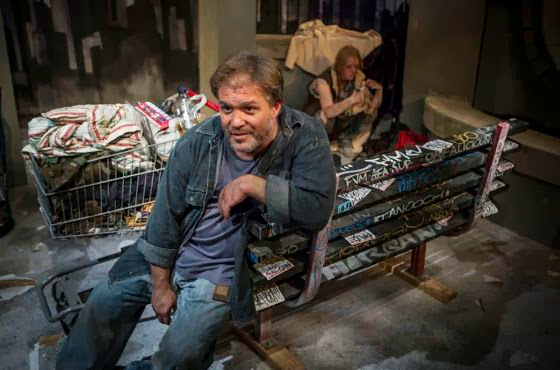 Posted by Bonnie Kenaz-Mara at 12:57 PM No comments: