OPENING: World Premiere of THE MAKING OF A MODERN FOLK HERO Via Other Theatre at Chicago Dramatists

Other Theatre Presents the World Premiere of
THE MAKING OF A MODERN FOLK HERO
By Martín Zimmerman
Directed by Kelly Howe
September 29 – October 29, 2017 at Chicago Dramatists 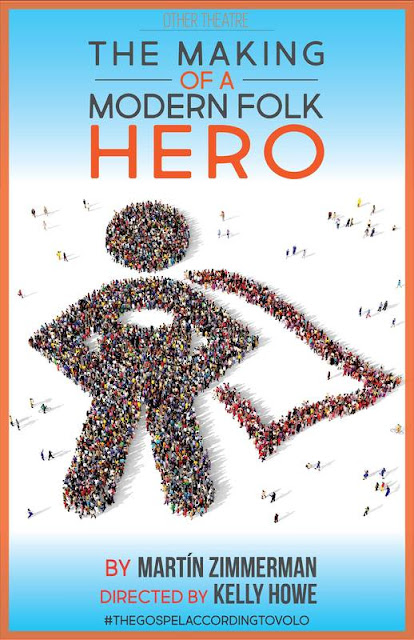 Here at ChiIL Live Shows we're on board with Other Theatre's fabulous and all too necessary mission statement, to tell the stories of persons or groups who are othered by systems of oppression. We too believe in the power of theatre to enact social change. We can't wait to catch their latest new work, the world premiere of THE MAKING OF A MODERN FOLK HERO.

Other Theatre, in association with Chicago Dramatists’ Grafting Project, is pleased to launch its 4th season with the world premiere of Martín Zimmerman’s comedic graphic novel for the stage THE MAKING OF A MODERN FOLK HERO, directed by Kelly Howe, playing September 29 – October 29, 2017 at Chicago Dramatists, 1105 W. Chicago Ave. in Chicago. Single tickets and season subscriptions are currently available at theothertheatrecompany.com.

A congressman entices an old friend (and washed-up actor) to portray a superhero in a publicity stunt designed to stop the unjust bulldozing of a public housing complex. They leave the crowd enthralled, but what happens when the character the politician created goes rogue? This graphic novel for the stage employs a seamless blend of live actors and shadow puppets to interrogate the hopes, fears and social forces that push people to yearn for and believe in the possibility of superheroes.

Comments Artistic Director Carin Silkaitis, “Martín’s play touches on some important ideas – particularly what happens when our politicians are too entrenched in the political ecosystem to be able to enact real change, even if their intentions are in the right place? I am so interested in the fact that the congressman must hire an actor to save this housing complex. He knows the right choice is siding with the disenfranchised, the poverty-stricken, but he is too embedded in the political mess to be able to vocally side with the very people he represents. After conversations with the playwright (and because of Donald Trump's campaign strategy) I am also struck by the way this play grapples with the idea of a person – one who has deep and intense psychological needs for admiration and adoration – hijacking a political movement.”

THE MAKING OF A MODERN FOLK HERO was developed in part through readings and workshops at Chicago Dramatists.

Kelly Howe (Director) is a theatre faculty member at Loyola University Chicago and Resident Dramaturg at TOTC. Recent directing credits include Sarah Myers' The Realm (TOTC), Gertrude Stein’s Doctor Faustus Lights the Lights, Ellen McLaughlin’s Iphigenia and Other Daughters, Juan Mayorga’s Way to Heaven, Brecht and Weill’s The Threepenny Opera, George Brant’s Elephant’s Graveyard, Martín Zimmerman’s Phoenix Unforgiven and Sarah Myers’ God of the Gaps. Recent dramaturgy for TOTC includes Twilight: Los Angeles, 1992, Daughters of Ire and Threesome. Kelly is a past president of Pedagogy and Theatre of the Oppressed (PTO) and co-organizer of the collective Theatre of the Oppressed and Activism in Chicago. She co-chaired three of PTO's international conferences and the 30th anniversary conference of the Association for Theatre in Higher Education (ATHE) in Chicago. As an artist/scholar, Kelly focuses on activist performance, particularly Theatre of the Oppressed and theatre as feminist organizing. She co-edited Theatre of the Oppressed in Actions (2015) with Julian Boal and Scot McElvany and is working on The Routledge Companion to Theatre of the Oppressed with Julian Boal and José Soeiro. Her writing also appears in Theatre Journal, Theatre Topics, Text and Performance Quarterly, Comparative Drama, etc. She is a member of the advisory board of the Jana Sanskriti International Research and Resource Institute, West Bengal, India. MA/PhD UT-Austin; BA Muhlenberg College.

About Other Theatre:
Other Theatre is dedicated to telling the stories of persons or groups who are othered by systems of oppression. Othering individuals or groups sustains power and privilege. Othering inherently implies hierarchy. Othering keeps the power in the hands of those who already have it.  Othering is an "us" vs. "them" mentality often centered around race, ethnicity, sexuality, gender, identity, class, religion and ability. Other Theatre is committed to telling these stories in the hope that we can lessen the amount of discrimination and oppression in our world.

About Chicago Dramatists:
Since 1979, Chicago Dramatists has been dedicated to the development and advancement of playwrights. Chicago Dramatists nurtures extraordinary playwrights with the space, resources and collaborators needed to realize new work and thrive as artists. Workshops, readings, classes and special programs provide opportunities for beginning and established dramatists to develop their work, expand their professional affiliations, showcase their plays and collaborate with actors, directors and audiences during the creative process. The Resident Playwright program is a selective program offered at no cost to playwrights who demonstrate talent and dedication to the craft of playwriting. But we also believe that to discover untapped talent and nurture playwriting as a discipline, we need to embrace playwrights wherever they are on their writing path—which is why we offer our Network Playwright program to playwrights at all levels of ability.

Every year, plays developed at Chicago Dramatists earn hundreds of professional accomplishments, including productions, awards, commissions and readings at theatres in Chicago and worldwide. Distinguished alumni of Chicago Dramatists include Tanya Saracho (El Nogalar, How to Get Away with Murder), Andrew Hinderaker (Colossus, Penny Dreadful), Rick Cleveland (The West Wing, Six Feet Under, Mad Men), Rebecca Gilman (Pulitzer nominee, Spinning into Butter, Luna Gale), Keith Huff (A Steady Rain, House of Cards), and many others.

Posted by Bonnie Kenaz-Mara at 11:38 AM No comments: