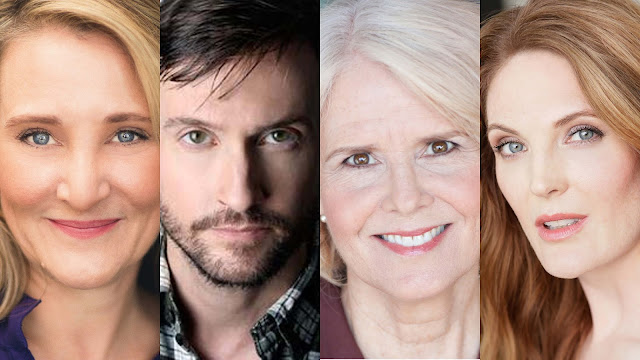 The Den Theatre is pleased to present a revival of Joel Drake Johnson’s true-to-life drama FOUR PLACES, directed by ensemble member Lia Mortensen, playing May 24 – June 30, 2019 at 1331 N. Milwaukee Ave. (2B) in Chicago. Tickets are currently available at www.thedentheatre.com, in person at the The Den box office or by calling (773) 697-3830. I'll be out for the press opening May 30th, so check back soon for my full review.

Deceptively simple in its structure and unfolding in real time, this emotionally precise play deploys its spare components to devastating and darkly comic effect. A brother and sister have gotten word from their elderly parents' caretaker that they may be a danger to each other. The brother joins his sister and mother on their weekly lunch date, hoping that he and his sister can get a clearer picture of the situation. As the mother confronts the indignities of age and the children stare down a mounting list of losses and disappointments, a harrowing and true-to-life image of the family emerges. Ultimately, with unwavering clarity and sensitivity, Joel Drake Johnson explores the ways that familial love and knowledge create both hurt and comfort.

Comments Director Lia Mortensen, “I was drawn to this play because it examines the universality of family: love, secrets, trust, lies – while also navigating how alcoholism threads through the tapestry of this family. It is at once hysterical, tragic, and ultimately moving. We recognize ourselves in these imperfect humans.”

About The Artists
Joel Drake Johnson (Playwright) is an award winning, internationally-produced playwright and teacher best known for his work at Chicago’s Victory Garden's Theater, where he was a member of the company’s Playwrights Ensemble for many years. His plays include Rasheeda Speaking, Four Places, A Blue Moon, As The Beaver, The End of the Tour, The Fall To Earth, A Blameless Life and Tranquillity Woods. His work has also been produced in Chicago at Steppenwolf Theatre and globally in New York City, Los Angeles, London, and many others cities.

Lia Mortensen (Director) is thrilled to be back at The Den where she co-directed Bus Stop by William Inge alongside her pal, Ryan Martin and directed The Quality of Life by Jane Anderson. As an actor, Lia has appeared in many productions in her hometown of Chicago at Goodman, Steppenwolf, Chicago Shakespeare, Northlight and Writers Theatre to name a few. Some productions include The Mystery of Love and Sex, Company, City of Conversation, Pericles, Annapurna, An Inspector Calls, Cymbeline, Ten Chimneys, The Big Meal, Rabbit Hole, Closer, Faith Healer, All’s Well, Measure for Measure, Lady Windermere’s Fan, Talley’s Folley, Ghosts and Twelfth Night. Her film and TV credits include the 2010 remake of Nightmare on Elm Street, View from Tall, Consumed, Blink, Empire, Shameless, Chicago Med, Chicago Fire, Chicago PD and Crisis.

Posted by Bonnie Kenaz-Mara at 6:43 AM No comments: