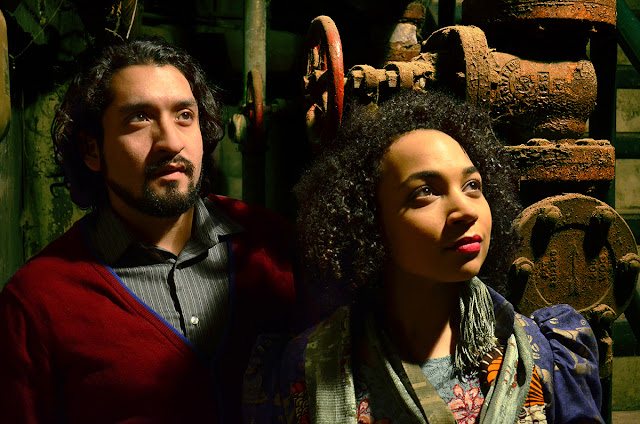 
Running Time: approximately two and a half hours with one intermission.
The novel will be on sale in the lobby.

Here at ChiIL Live Shows we're eager to catch Lifeline's latest, a remount of their 2010 critically acclaimed, award winning hit, Neverwhere. We're also elated that Pegasus Theatre's Executive Artistic Director, Ilesa Duncan is directing. I'll be out for the press opening June 3rd, so check back soon for my full review. This is sure to be one to see.

Lifeline Theatre presents Neil Gaiman’s Neverwhere, adapted by ensemble member Robert Kauzlaric and directed by Pegasus Theatre Executive Artistic Director Ilesa Duncan. Kauzlaric’s adaptation of Neverwhere premiered at Lifeline in 2010 and garnered three Non-Equity Jeff Awards (New Adaptation, Scenic Design, and Sound Design). After receiving dozens of productions across the U.S., Canada, England, and Ireland, Neverwhere returns home for the first time, with an entirely new production helmed by Duncan. Richard Mayhew commits an act of kindness on the streets of London and finds himself trapped in a shadow world beneath the city. Lady Door returns home one day to find her family slain and her life upended. Drawn together by fate – and forces more powerful than they can guess – these two must brave countless trials, uncover the truth behind a dark conspiracy, and face the indomitable Great Beast before they can set things right again. Journey to London Below with a rogues’ gallery of liars, outcasts, and assassins, on a treacherous quest to awaken the hero within.

Regular performance times (June 7 – July 15) are Thursdays and Fridays at 7:30 p.m., Saturdays at 4 and 8 p.m., and Sundays at 4 p.m. Ticket prices are $40 for regular single tickets, $30 for active and retired military personnel (with ID), $30 for seniors, $20 for students (with ID), $20 for rush tickets (available half hour before show time, subject to availability), and $20 for previews. Group rate for 12 or more is available upon request. Tickets may be purchased at the Lifeline Theatre Box Office, 773.761.4477, or by visiting www.lifelinetheatre.com.

Accessible Performances: The Saturday, June 16, 4 p.m. performance and the Friday, July 13, 7:30 p.m. performance will feature open captioning for patrons who are deaf or hard-of-hearing. The Sunday, June 24, 4 p.m. performance will feature a pre-show touch tour of the set at 2:30 p.m. and live audio description for patrons who are blind or have low vision. For more information about Lifeline’s accessibility services, please contact Accessibility Coordinator Erica Foster at 773.761.4477 x703 or at access@lifelinetheatre.com. 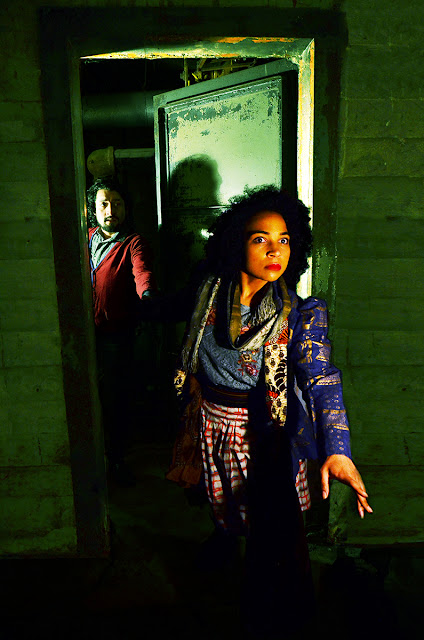 The complete cast and production team for Neverwhere includes:

Regular performance times (June 7 – July 15) are Thursdays and Fridays at 7:30 p.m., Saturdays at 4 and 8 p.m., and Sundays at 4 p.m. Ticket prices are $40 for regular single tickets, $30 for active and retired military personnel (with ID), $30 for seniors, $20 for students (with ID), $20 for rush tickets (available half hour before show time, subject to availability), and $20 for previews. Group rate for 12 or more is available upon request. Tickets may be purchased at the Lifeline Theatre Box Office, 773.761.4477, or by visiting www.lifelinetheatre.com.

Lifeline Theatre is accessible by CTA (Red Line Morse stop/busses) and free parking is available at Sullivan High School (6631 N Bosworth Ave, lot located on Albion Ave. just east of Bosworth) with free shuttle service before and after the show.  Street parking is also available. Lifeline is accessible to wheelchair users and visitors who need to avoid stairs.

Now in its 35th season, Lifeline Theatre is driven by a passion for story. Our ensemble process supports writers in the development of literary adaptations and new work, and our theatrical and educational programs foster a lifelong engagement with literature and the arts. A cultural anchor of Rogers Park, we are committed to deepening our connection to an ever-growing family of artists and audiences, both near and far. Lifeline Theatre – Big Stories, Up Close. 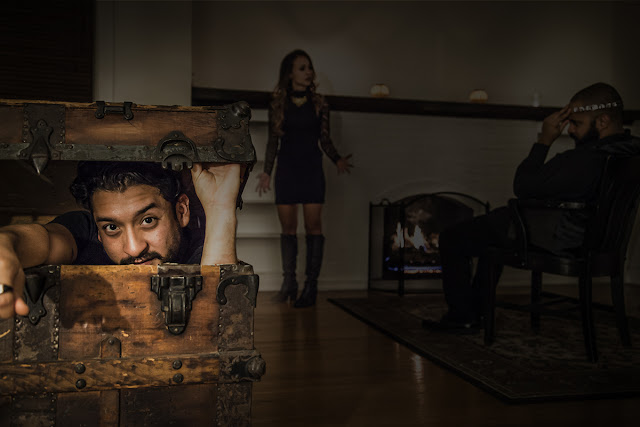 It's been a whirlwind year so far for Chicago's theatre scene and sometimes there's just too much of a good thing and multiple press nights happen simultaneously. Since I haven't mastered the art of cloning quite yet, we're finally getting out to see Shakespeare's Cymbeline at Strawdog Theatre Company tonight. It's been near the top of our must see list since it opened the final week of January.

The performance schedule is Thursdays – Saturdays at 8 p.m. and Sundays at 4 p.m. All performances have ground level access and are wheelchair accessible.

An industry performance is Monday, Feb. 13 at 8 p.m. for $18. Regular run tickets $30, they may be ordered online or by calling OvationTix toll-free: 866-811-4111. Subscriptions, group, rush, senior and student discounts are also available.

Shakespeare’s Cymbeline has all the vicious insults, bloody blades, cross-dressed ladies and compromised bedchambers that has made the Bard famous. It is also a no-holds-barred epic, a dark fairy tale set off by a king's rash verdict and a princess who won't stand for her man's wrongful banishment. The acclaimed director of Lifeline Theatre's Hunger and Irish Theatre of Chicago's The White Road, recently seen onstage in Strawdog’s production of The Arsonists, makes his directing debut with the company.

ABOUT ROBERT KAUZLARIC, DIRECTOR
Robert Kauzlaric is a Chicago based director and actor who appeared in Strawdog’s Season 27 production of The Arsonists. Recent directing credits include As You Like It, The Rivals (Wilde nomination: Best Play), Cymbeline (Wilde Award: Best of the Bard), She Stoops to Conquer, Love’s Labour’s Lost (Wilde Award: Best of the Bard), and Tartuffe for the Michigan Shakespeare Festival; the world premiere of Karen Tarjan’s The White Road for Irish Theatre of Chicago (nominated for seven Jeff Awards, including Best Production-Play, Midsize) and the world premieres of Chris Hainsworth’s adaptation of Hunger and John Hildreth’s adaptation of Treasure Island, both at Lifeline Theatre.

ABOUT STRAWDOG THEATRE COMPANY
Since its founding in 1988, Strawdog Theatre Company has offered Chicagoland the premiere storefront theatre experience and garnered numerous Non-Equity Jeff Awards with its commitment to ensemble acting and an immersive design approach. The celebrated Company develops new work, re-imagines the classics, melds music with theatre, asks provocative questions and delivers their audience the unexpected.
*Strawdog Theatre Company’s 2016 - 2017 season will be produced in its itinerant home at the new Factory Theatre in Rogers Park, 1621 W. Howard St. on the Chicago-Evanston border in the historic Howard Theatre building. The theatre space is a newly created 70 seat three-quarters thrust just two blocks from CTA’s Howard Red Line terminal. Strawdog’s 29th Season may be viewed online at strawdog.org.

Strawdog Theatre Company is proud to announce the second production in its 2016 - 2017 season, William Shakespeare’s CymbelIne, January 13 – February 25, directed by Robert Kauzlaric and performed at The Factory Theater, 1623 W. Howard St. The performance schedule is Thursdays – Saturdays at 8 p.m. and Sundays at 4 p.m. Opening Night is Monday, January 23 at 8 p.m. All performances have ground level access and are wheelchair accessible, with an Access Project performance Sunday, Feb. 5 at 4 p.m. with a touch tour at 2:45 p.m.* An industry performance is Monday, Feb. 13 at 8 p.m. for $18. Preview tickets are $15 with regular run tickets $30, they may be ordered online at strawdog.org or by calling OvationTix toll-free: 866-811-4111. Subscriptions, group, rush, senior and student discounts are also available.

Strawdog Theatre Company is supported in part by The Alphawood Foundation, The Gaylord and Dorothy Donnelley Foundation, The Richard H. Driehaus Foundation, The Elizabeth F. Cheney Foundation, City of Chicago's Department of Cultural Affairs and Special Events, and through the generous contributions of businesses and individuals.
Posted by Bonnie Kenaz-Mara at 2:21 PM No comments: