Chicago Premiere of THE MAGNOLIA BALLET Via About Face Theatre May 12 through June 11, 2022 at the Den Theatre

About Face Theatre continues its 27th season with the Chicago premiere of Terry Guest’s haunting new drama THE MAGNOLIA BALLET, running May 12 through June 11, 2022, at the Den Theatre. Following the story of a young Black man in Georgia who finds a shocking discovery among his grandfather's letters, THE MAGNOLIA BALLET explores the need to tear down the rules that are killing us in order to finally live. Associate Artistic Director Mikael Burke premiered this new work in March 2022 at Phoenix Theatre in Indianapolis and now brings the play to Chicago with playwright Terry Guest in the lead role. I'll be out for the press opening Friday, May 20th, so check back shortly for my full review.

Thursdays through Saturdays at 7:30pm and Sundays at 3:00pm

Tickets are on sale now online at AboutFaceTheatre.com, by calling 773.697.3830, or in-person at the Den Theatre box office. Ticket prices range from $5 to $35.

AFT offers a ticket pricing system that allows each patron to decide the price that they can comfortably afford to pay for a ticket. Ultimately, About Face wants everyone who wants to attend a show to be able to do so. Please note, there are limited quantities available at each pricing level. 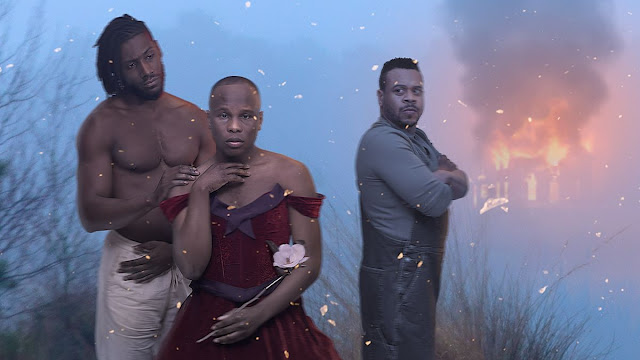 Ezekiel is a Black teenager with a secret that threatens to destroy his already broken home. He’s haunted by the ghosts of racism, homophobia, and toxic masculinity–the same ghosts that have plagued men in Georgia for generations, including his emotionally distant father. But when he discovers a trove of forbidden love letters among his late grandfather’s belongings, Ezekiel  begins to believe that the only way to fight these multi-generational ghosts is to burn everything to the ground. The Magnolia Ballet is a Southern Gothic fable that melds high drama, dance, poetry, and spectacle to explore masculinity, racism, and the love between a queer kid and his father.

“As a queer Black man raised in the American south, this play is hugely important to me,” says director Mikael Burke. “No young person should ever be made to feel the way I did, like they are wrong simply for existing. This play forces all of us to reckon with the legacies of toxic masculinity and racism in this country. It’s a play that demands that we all wrestle with the ghosts of our prejudices and recognize where the rules we once set in order to survive have become the killers of a new generation.”

Terry Guest is a Chicago based playwright, actor and teaching artist. He wrote and starred in AT THE WAKE OF A DEAD DRAG QUEEN, which was the recipient of the 2018 Out Front Spectrum Series Grant and had its World Premiere in Chicago at The Story Theatre (directed by Mikael Burke). Other work includes: A GHOST IN SATIN (The Williamstown Theatre Festival, directed by Wardell Julius Clark), MARIE ANTIONETTE AND THE MAGICAL NEGROS (The Story Theatre), THE MADNESS OF MARY TODD (Goodman Theatre Playwrights Unit Commission), MICHAEL JACKSON AND THE DEVIL’S BOOK (Jackalope) and ANDY WARHOL PRESENTS: THE COCAINE PLAY. More in for at terrycguest.com

Sheldon is overjoyed to return to About Face where he previously performed in THIS BITTER EARTH and TIME IS ON OUR SIDE. His other credits include the TRAGEDY OF OTHELLO THE MOOR OF VENICE, OEDIPUS REX, and MAN IN THE RING (Court Theatre); A WONDER IN MY SOUL (Victory Gardens Theatre), THE SHIPMENT (Red Tape Theatre); 1980 (Jackalope Theatre) and more. He also has numerous credits in Boston including THE GRAND INQUISITOR, directed by Peter Brook through ArtsEmerson. His film/screenwriting credits include CICADA (Spirit Award Nominated, Best First Screenplay), THE CANYONLANDS, and MY NAME IS ALEX. Sheldon is also a queer educator having taught with Steppenwolf, Northlight Theatre, and The League of Chicago Theatres. Sheldon received his BFA in Acting from Emerson College and is a proud Artistic Associate at About Face!

Ben is thrilled to be making his Chicago theatre debut in THE MAGNOLIA BALLET. He graduated from the University of Iowa in 2020 with a degree in theatre arts and cinema. Some of his favorite roles have included Christopher in THE CURIOUS INCIDENT OF THE DOG IN THE NIGHT-TIME, Flute in A MIDSUMMER NIGHT’S DREAM and Jason in SWEAT.

ABOUT FACE THEATRE advances LGBTQ+ equity through community building, education, and performance. AFT envisions an affirming and equitable world in which all LGBTQ+ individuals are thriving and free from prejudice and discrimination. About Face Theatre is also dedicated to being an intentionally and increasingly anti-racist organization. Due to the intersectionality of our identities, we understand our work to advance LGBTQ+ equity as directly connected to movements for racial justice.