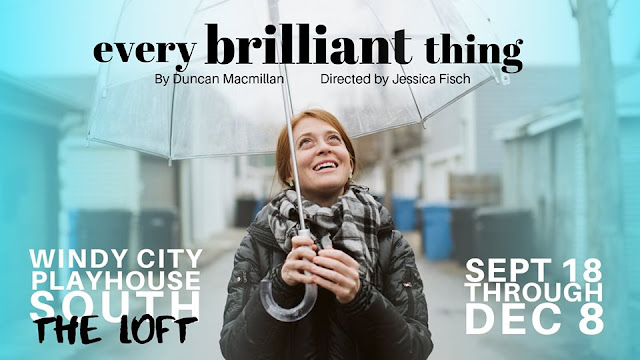 Windy City Playhouse will present the Chicago premiere of Duncan Macmillan’s critically-acclaimed “Every Brilliant Thing” in a brand-new third performance space at the Playhouse’s South Loop location (2229 S. Michigan Ave.). “Every Brilliant Thing,” a funny and heartfelt personal chronicle of life's joys, will be presented in a loft space, designed by award-winning production designer Scott Davis, on the third floor beginning Sept. 18, while the long-running hit “Southern Gothic” continues its run in the same building on the first floor. I'll be out for the press performance Friday, Sept. 27th, so check back with ChiILLiveShows.com soon for my full review. For tickets and more information, please visit www.WindyCityPlayhouse.com.

Known from the popular, same-titled HBO adaptation, “Every Brilliant Thing” follows the protagonist as she guides the audience through a story of finding the things that make life worth living in the face of her mother's depression. Stay true to the original production and Windy City Playhouse’s immersive style, the show will offer a unique opportunity for audience members to participate in the story. This one-person show is led by Rebecca Spence as the Narrator.

The Guardian called “Every Brilliant thing “a heart-wrenching, hilarious play… possibly one of the funniest plays you’ll ever see, full stop.”  The New York Times raved “In the face of great loss and depression, a real effort of will is required to recall why it’s worth continuing with life. That will is the force that animates ‘Every Brilliant Thing’ and keeps it afloat for the captivating hour of its duration.” The 2014 Barrow Street production of “Every Brilliant Thing” starring Jonny Donahoe was filmed for an HBO Documentary that same year.

"Within 10 minutes of watching ‘Every Brilliant Thing,’ I had fallen in love. Everyone in the room was part of this beautiful whirlwind of a quest to define and seek out brilliance, or more bluntly, a reason to live,” said Windy City Playhouse Artistic Director Amy Rubenstein. “After watching the engagement of these audience members, we immediately set on a quest of our own, to gain the rights to produce ‘Every Brilliant Thing.’ That was not easy, but after two years of nagging and pushing, we did it! It tickles me to think about sharing this BRILLIANT experience with our audiences."

The Playhouse invites audience members to be a part of the action through brief, optional audience participation. While guests will be seated for the entirety of the production, there will be moments for them to be briefly cast in the play in collaboration with the Narrator.

The performance schedule for “Every Brilliant Thing” is as follows: Wednesdays through Saturdays at 7 p.m. and Sundays at 1 p.m. Tickets ($55-$75) are now on sale.

About the artists in “Every Brilliant Thing”:

Duncan Macmillan (Playwright) is an award-winning writer and theatre director whose plays include “Lungs,” “Every Brilliant Thing” and “2071.” His play “People, Places and Things” transferred from the National Theatre to the West End in 2016. His other plays include: “1984,” co-adapted/co-directed with Robert Icke, “The Forbidden Zone,” “Wunschloses Unglück,” and “Reise durch die Nacht.”

Marian Van Noppen (Narrator Understudy) is making her Windy City Playhouse debut. She is an actor, singer, songwriter and visual artist with roots along the east coast (North Carolina, South Carolina, Virginia, New York City) and now Chicago. Chicago appearances include Maggie Kubley’s “Come Over” (Steppenwolf Lookout Series 2019), performances at The Theatre School at DePaul University and singing backup for synth-pop band Celine Neon. Marian graduated in June with her MFA in Acting from DePaul University and is represented by DDO Chicago.

Amy Rubenstein is the Artistic Director and co-founder of Windy City Playhouse. Since the theater’s premiere in March 2015, she has overseen 11 mainstage productions, including the recent smash hit, world premiere “Southern Gothic,” of which she was also a co-creator. During her tenure, the Playhouse has been lauded for its uniquely contemporary approach that focuses on audience experience and has received numerous industry accolades, including seven Joseph Jefferson Award nominations, 11 Chicago Theater Awards, including the 2018 Trailblazer Award, and three International Centre for Women Playwrights’ 50/50 Awards. Prior to her current role at the Playhouse, Rubenstein’s credits include performing with Long Beach Playhouse, Human Race Theatre and Center Stage Theater, among others. She is a proud graduate of Brandeis University.

Helen Lattyak (Production Stage Manager) most recently worked with Windy City Playhouse on their 2019 production of “Noises Off.” Other credits include, “Bull in a China Shop,” “Significant Other,” “Bright Half Life,” “The Secretaries,” “Le Switch,” “Abraham Lincoln was a Faggot” and “We Three Lizas” (About Face Theatre), “A Funny Thing Happened on the Way to the Gynecologic Oncology Unit at Memorial Sloan Kettering Cancer Center of New York City” (Route 66), “Picnic” (American Theater Company), “Sucker Punch,” “Samsara” and “Failure: A Love Story” (Victory Gardens Theater), “Christmas at Christine’s,” “Ultra American,” “Muthaland” and “The Hundred Flowers Project” (Silk Road Rising) and “Brahman/i: A One-Hijra Stand Up Comedy Show” (About Face Theater and Silk Road Rising). Lattyak is a company member at TUTA Theater Chicago. She is a graduate of Loyola University Chicago and a member of the Actors Equity Association.

Caitlin McCarthy (Properties Designer) recently worked with Windy City Playhouse on their 2019 production of “The Recommendation”. She is a multidisciplinary artist who works as a prop designer, costume designer, production manager, visual artist and artistic producer. Recently she designed the costumes and set textiles for “The Late Wedding” (The Neighborhood Theatre) and served as the costume and production designer for Nire Nah’s music video, “Citizens of Atlantis”. She also recently production designed “The Care and Keeping of You”, a short film. Production Management credits include: “I’m Gonna Pray for You So Hard”, “Refrigerator” and “Mike Pence Sex Dream” (First Floor Theater). Caitlin is a company member at First Floor Theater. 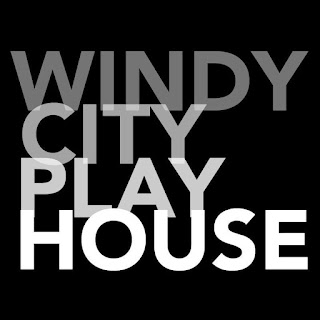 Posted by Bonnie Kenaz-Mara at 4:18 PM No comments: