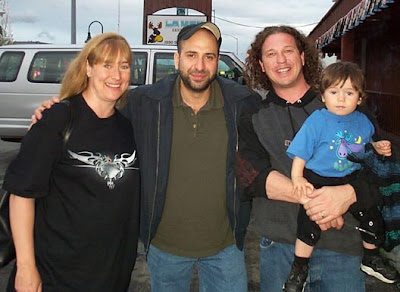 My family ChiILin' with Dave Attell in Alaska in 2002

My husband, Dug, of Dug Production Sound, Inc worked on Insomniac with Dave Attell for 4 seasons and traveled the world with him on the international specials. Fun times! Dug even makes cameo appearances in many of the episodes.

Our whole family tagged along on the Insomniac Alaska shoot, pictured above, when our son, Dugan was one. Dave ended up sitting next to our toddler for dinner one night and was a great sport when our kid decided to hand feed Dave his Mexican food. We still love to catch Dave Attell and his irreverent humor when he comes through town, and can't wait to see him in August. Tickets are on sale now for his 3 night run in Chicago at The Den Theatre. Don't miss this! 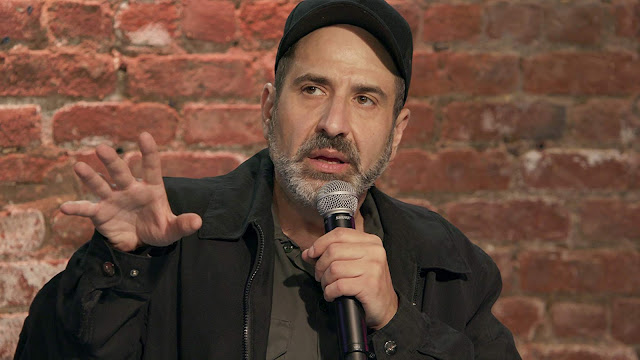 The Den Theatre is pleased to announce comedian Dave Attell for five stand-up performances August 18 – 20, 2022 on The Heath Mainstage, 1331 N. Milwaukee Ave. in Chicago’s Wicker Park neighborhood. Tickets ($18 - $40) are currently available at www.thedentheatre.com or by calling (773) 697-3830.
Dave Attell is a stand-up comedian, actor and writer, best known as the host of Comedy Central's Insomniac with Dave Attell, which gave him a cult following. He can next be seen in the Hulu series Life & Beth alongside Amy Schumer, Michael Rapaport and Michael Cera. He also appears on Bumping Mics with Jeff Ross, currently streaming on Netflix and HBO’s Crashing with Pete Holmes. His stand-up series, Dave Attell’s Comedy Underground and his one-hour special, Road Work, were featured on Comedy Central and Road Work is now streaming on Netflix.
His film credits include Chris Rock’s cult film Pootie Tang, Funny People, Scary Movie 4 and Los Enchiladas and the Amy Schumer films Trainwreck and I Feel Pretty. His television credits include The Simpsons, Difficult People, Bob’s Burgers, Arrested Development, The Jim Gaffigan Show, The Jim Norton Show, Inside Amy Schumer, Louie, Ed, Everybody Loves Raymond and Tough Crowd with Colin Quinn. He was named one of the “25 Funniest People in America” by Entertainment Weekly Magazine. When not on the road, Attell makes regular appearances at the Comedy Cellar in New York City.
Performance Schedule
Thursday, August 18 at 8 pm
Friday, August 19 at 7 pm & 9:15 pm
Saturday, August 20 at 7 pm & 9:15 pm
Tickets: $30 regular seating ($20 obstructed view); $50 front row VIP table seating; $40 VIP table seating; $35 mezzanine table seating. All ticket prices include cocktail service with a two-drink minimum.
The Den currently requires proof of vaccination for all guests, staff and performers and adheres to all CDC, state and local safety guidelines. Additionally, masking is required for all guests during performances. For the most current information on The Den’s COVID guidelines, visit thedentheatre.com/covid19-policy.
About The Den Theatre
Artistic Director Ryan Martin opened The Den in 2010 in the Wicker Park neighborhood with a single theatre space. Now celebrating its tenth year, The Den is a multi-level live entertainment venue that boasts five intimate and unique theaters ranging from 50 – 300 seats. The first floor houses The Den’s Haven Lounge – a full-service coffee shop and bar where neighbors, audiences and like-minded culture hounds gather to drink, eat, talk, read, watch, think, listen and live. Currently, The Den is home to five resident theatre companies including Broken Nose Theatre, ComedySportz Chicago, First Floor Theater, Haven and The New Coordinates (formerly The New Colony). Hundreds of other companies and artists from Chicago and beyond have called The Den home – from national names to local stars, The Den consistently plays host to a lineup of exciting and diverse talent. As a building created for interdisciplinary arts, The Den has accommodated a wide variety of programming, including plays, musicals, film screenings, live music, dance, improv and stand-up comedy, seminars and speaking engagements. For additional information, visit www.thedentheatre.com. 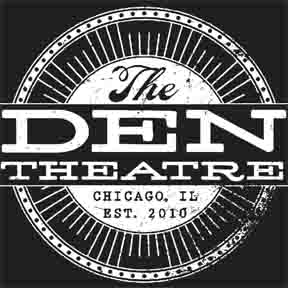 Posted by Bonnie Kenaz-Mara at 12:26 PM No comments: