SAVE THE DATES: 62nd Joffrey Ballet Season Announced For 2017-18 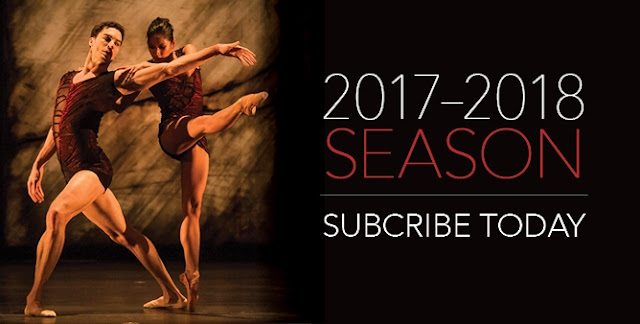 Ashley Wheater, Artistic Director of The Joffrey Ballet, proudly announces an impressive 2017-18 season including a world premiere by Joffrey Ballet Master Nicolas Blanc, the North American Premiere of Midsummer Night’s Dream by acclaimed chorographer Alexander Ekman plus Chicago Premieres by George Balanchine, Lola de Ávila and Jerome Robbins. The Joffrey Ballet kicks off its 62nd season with Lola de Ávila’s Giselle, October 18-29, followed by the return of Tony Award®-winner Christopher Wheeldon’s newly reimagined The Nutcracker, December 1-30. For its winter engagement, The Joffrey Ballet presents Modern Masters, a mixed repertoire program with four works – a World Premiere by Nicolas Blanc (untitled), the Chicago Premieres of Kammermusik No. 2 by George Balanchine and Glass Pieces by Jerome Robbins in honor of the 100th anniversary of his birth plus Body of Your Dreams by Myles Thatcher, February 7-18. The Joffrey Ballet will conclude its season with Ekman’s Midsummer Night’s Dream, April 25-May 6.

All performances take place in the Joffrey’s home venue, the historic Auditorium Theatre of Roosevelt University, in downtown Chicago at 50 East Congress Parkway. All programs throughout the season feature live music performed by the Chicago Philharmonic conducted by Scott Speck, Music Director of The Joffrey Ballet.

This season, for the first time, The Joffrey Ballet and Lyric Opera of Chicago will collaborate on a world premiere production of Christoph Willibald Gluck’s classic opera, Orphée et Eurydice directed and choregraphed by internationally acclaimed Director and Chief Choreographer of The Hamburg Ballet, John Neumeier. Orphée et Eurydice will be presented at Lyric’s Civic Opera House, September 23 - October 15.

Classically trained to the highest standards, The Joffrey Ballet expresses a unique, inclusive perspective on dance, proudly embracing the diversity of America with its company, audiences, and repertoire which includes major story ballets, reconstructions of masterpieces and contemporary works. Founded by visionary teacher Robert Joffrey in 1956, guided by celebrated choreographer Gerald Arpino from 1988 until 2007, The Joffrey Ballet continues to thrive under Artistic Director Ashley Wheater and Executive Director Greg Cameron.

“During my time as Artistic Director of The Joffrey Ballet, we’ve worked tirelessly to redefine ballet at the highest level,” said Ashley Wheater. “This season, we elevate this commitment with dynamic performances that celebrate joy in a time when transformative storytelling has never been more needed. We present sweeping passion in modern renditions of Giselle and Midsummer Night’s Dream; we see hope and wonder through the eyes of Chicago immigrants with the return of Christopher Wheeldon’s reimagined Nutcracker; and finally, we feel inspiration with works by modern trailblazers and legendary voices including Jerome Robbins, George Balanchine, Alexander Ekman, and Myles Thatcher.”

“Ashley Wheater’s commitment to world-class artistry and transformative experiences has ignited hope and wonder in Chicago audiences, and this season is no exception,” added Executive Director Greg Cameron. “From the youthful passion of Giselle and magical wonder of The Nutcracker to boundary- pushing masterpieces from rising talent and legendary voices, these unforgettable stories beautifully express our human condition and provide a beacon of hope and inspiration. We look forward to sharing these remarkable and moving ballet experiences with Chicago audiences in the year to come.”

The Joffrey Ballet launches its 2017-18 season with the Chicago Premiere of Lola de Ávila’s visionary adaption of Giselle. Former Associate Director of the San Francisco Ballet School, de Ávila’s take on this classic Romantic-era ballet is set to composer Adolphe Adam’s original score and tells the tale of young Giselle, who discovers her lover is betrothed to another and dies of grief, only to be enlisted by the vengeful Wilis, a ghostly army of maidens who haunt the forests, dancing to death any male mortal who crosses their path. When her beloved wanders into their grasp, Giselle makes the ultimate act of love to free him from his fate.

The Joffrey’s winter program, a mixed repertory program entitled Modern Masters, features a world premiere by Joffrey Ballet Master Nicolas Blanc, the Chicago Premieres of Kammermusik No. 2 by George Balanchine and in honor of the 100th anniversary of his birth, Glass Pieces by Jerome Robbins plus Body of Your Dreams by Myles Thatcher.

Kammermusik No.2, originally created for New York City Ballet in 1978 by world renowned contemporary ballet choreographer George Balanchine, broke the conventions of ballet with its exceptional use of complex structures, precision, energy and speed. Set to a score by neoclassical composer Paul Hindemith, hailed as one of the great German composers of the 20th century, this work for 12 dancers features an eight-man ensemble performing jagged lines and stylized gestures along with two couples, who present the counterpoint to the ensemble with duets set to the intricate passages for piano.

Body of Your Dreams, created by up-and-coming choreographer Myles Thatcher, is a tongue-in-cheek take on fitness which made its world premiere as part of the 2014–2015 Rolex Mentor and Protégé Arts Initiative. A contemporary work for nine dancers, Body of Your Dreams features a series of movements expressing the highs and lows of body image woven together with inventive wit, set to a score by Dutch avant pop composer Jacob ter Veldhuis. A current dancer with San Francisco Ballet, Thatcher is known for melding contemporary sensibility with classical technique to resonate feeling and atmosphere. Thatcher made his Joffrey Ballet choreographic debut with the World Premiere of Passengers in September 2015.

Nicolas Blanc, current Ballet Master and Principal Coach for The Joffrey Ballet, will create a new work (untitled) for the company which will take audiences through five mesmerizing worlds set to an orchestral and electronic soundscape by Mason Bates, composer-in-residence at the Kennedy Center for the Performing Arts. Former Principal Dancer with San Francisco Ballet, Blanc made his choreographic debut with the Joffrey in April 2015 with the U.S. Premiere of Evenfall. Most recently, Blanc was selected to participate in the 2015 National Choreographers Initiative as well as the New York City Ballet's New York Choreographic Institute where he created Mothership, which premiered in New York City Ballet's 2016 gala.

In honor of the 100th anniversary of Jerome Robbins’ birth, the Joffrey will present the Chicago Premiere of Glass Pieces, a signature Robbins’ ballet set to three works by American minimalist composer Philip Glass. Originally premiering with New York City Ballet in 1983, Glass Pieces is a tour de force of movement and music for 42 dancers featuring urban, postmodern choreography, recurrent rhythms, shifting patterns and an energized pace to reflect the pulse of metropolitan America in the ‘80s. One of the great American choreographers of the 20th century, Robbins prolific career has made a profound contribution to the ballet world in addition to renown commercial credits as a director and choreographer for theater, movies and television including On the Town, West Side Story, The King and I, Gypsy, Peter Pan, and Fiddler on the Roof. Even after his death in 1998, his superb body of work continues to be celebrated and performed by companies worldwide. In its 62-year history, The Joffrey Ballet has presented numerous works by Jerome Robbins, including The Concert, Interplay, Moves and N.Y. Export: Op. Jazz.

Celebrated around the globe for his originality and humor, Swedish choreographer Alexander Ekman brings his unique vision to the Joffrey with the North American Premiere of his Midsummer Night’s Dream, which made its world premiere with The Royal Swedish Ballet in 2015. A full-length ballet vastly different from Shakespeare’s tale, Ekman’s take on a Midsummer Night’s Dream presents a festive Scandinavian Midsummer celebration, as the border between the world of mortals and the kingdom of the supernatural becomes thinner, turning the celebration into a dreamlike fantasy. Ekman has collaborated with companies worldwide to create award-winning works that both entertain and challenge the observer, including the Chicago Premieres of Ekman’s Tulle in 2015 along with his wild and rhythmic Episode 31 which premiered on the Joffrey during the 2013 Chicago Dancing Festival. Ekman will also present the world premiere of a new work (untitled) during The Joffrey Ballet’s spring program Global Visionaries in April 2017.

Joffrey Gala Performance — April 20, 2018
For the third year in a row, The Joffrey Ballet will open its special, one-hour gala performance exclusively to Joffrey subscribers and gala donors.

Lyric Collaboration — September 23 – October 15, 2017
This season, The Joffrey Ballet and Lyric Opera of Chicago will collaborate on a world premiere production of Christoph Willibald Gluck’s classic opera Orphée et Eurydice. Based on the Greek myth of Orpheus, Orphée et Eurydice features a modern-day Orpheus, a poet whose every word communicates an overwhelming love for his late wife, Eurydice. After refusing to accept her death, he courageously journeys to the Underworld to bring her back to life but first must face Love’s challenge. Lyric Opera will present Orphée in the Paris version, containing thrilling ballet sequences that will come to life under the direction and choreography of internationally acclaimed Director and Chief Choreographer of The Hamburg Ballet, John Neumeier. Most recently, Neumeier worked with the Joffrey, upon whom he set the North American premiere of his full-length story ballet Sylvia in October 2015. Orphée et Eurydice will be presented in seven performances at Lyric’s Civic Opera House, September 23 - October 15.

Tickets and Subscriptions
Three-program subscriptions, which do not include The Nutcracker or Orphée et Eurydice, start at $87. Subscriptions will be available for purchase as of February 22, 2017, online, by mail (Joffrey Ballet Subscriptions, The Joffrey Ballet, Joffrey Tower, 10 East Randolph Street, Chicago, IL 60601), by telephone at 312-386-8905, by fax at 312-739-0119, or by email at subscriptions@joffrey.org.

Single tickets for the October, February and April performances as well as The Nutcracker will be available starting August 1, 2017. Single tickets are available at The Joffrey Ballet’s official Box Office located in the lobby of 10 East Randolph Street, by telephone at 312-386-8905, or online.

Orphée et Eurydice will be presented by The Lyric Opera of Chicago at the Civic Opera House (20 N. Wacker Drive, Chicago). Joffrey Ballet subscribers will receive an exclusive pre-sale opportunity with a 20% discount. Tickets can be purchased through Lyric Opera audience services at 312-827-5600. 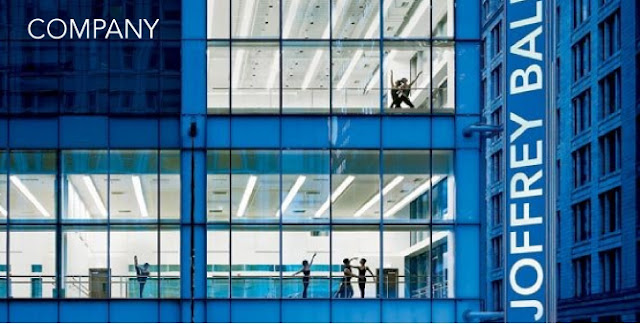 About The Joffrey Ballet
Classically trained to the highest standards, The Joffrey Ballet expresses a unique, inclusive perspective on dance, proudly reflecting the diversity of America with its company, audiences, and repertoire which includes major story ballets, reconstructions of masterpieces, and contemporary works.

The Company’s commitment to accessibility is met through an extensive touring schedule, an innovative and highly effective education program including the much lauded Academy of Dance, Official School of The Joffrey Ballet, Community Engagement programs, and collaborations with myriad other visual and performing arts organizations.

For more information on The Joffrey Ballet and its programs, click HERE.
Posted by Bonnie Kenaz-Mara at 8:33 PM No comments: