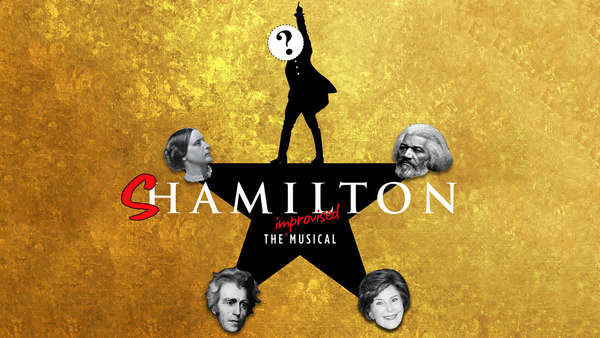 The producers of the Chicago-based “Baby Wants Candy” announce the debut of their newest improvised musical, “Shamilton,” inspired by hit musical by Lin-Manuel Miranda, at Apollo Theater Chicago (2540 N. Lincoln Ave). Directed by one of the founding members of “Baby Wants Candy” and Emmy Award-winner Peter Gwinn, the improvised musical features a 75-minute live-performance musical written on-the-spot about a historic figure of the audiences’ choosing. With a cast made up of ensemble members from “Baby Wants Candy” and some of Chicago’s top musical improvisors, “Shamilton” begins at the Apollo Theater January 20, 2017 (opening night is set for January 27) and runs every Friday at 10:30 p.m. through March 31.

“Baby Wants Candy’ has long been known for our ensemble’s incredible talent and world-class improvisation, and we can’t wait to explore a new genre-busting show at the Apollo,” said Producer Al Samuels. “We’re so excited to bring some of the spectacle of a production like ‘Hamilton’ into an improv show, including improvised hip-hop, historical costumes and overwhelming historic significance, no matter who the hero. Now we can finally see the ‘Hamilton’ treatment of Sarah Palin or Steve Bartman we’ve all been waiting for.”

From the minds behind “Baby Wants Candy,” “Thrones! The Musical Parody” and “Fifty Shades! The Musical Parody,” “Shamilton” invites audiences to call out any famous historic figure—from Leonardo da Vinci to Genghis Khan to Paris Hilton—and watch an improvised musical unfold in real time before their eyes and ears, complete with gorgeous solos, sweeping chorus numbers and hilarious on-the-fly choreography. The production features a Chicago-based ensemble and a full band, including electronic musical enhancements with looping and percussion.

After beginning in Chicago at Improv Olympic and moving to the Apollo Theater in 2005, “Baby Wants Candy” has expanded with performing companies in Chicago, New York and Los Angeles, as well as an international touring company. Since its inception, “Baby Wants Candy” has performed more than 3,000 completely improvised musicals to sold-out crowds all over the world. In addition to the run at the Apollo Theater, they also perform weekly at Upright Citizens Brigade (UCB) in LA and are debuting a weekly run Second City’s Judy’s Beat Lounge Theater. Their show at the Edinburgh Fringe Festival enjoys a perennially fully sold-out run, and in February 2017 the group will travel to Australia to perform a month long run at the Adelaide Fringe Festival. The producing team behind “Baby Wants Candy” debuted “50 Shades! The Musical Parody” in 2012, playing to sold-out crowds off-Broadway, nationally and internationally. “50 Shades” still runs in Las Vegas and Japan, and has been translated into over 12 languages. In 2015, Baby Wants Candy also produced “Thrones! The Musical Parody,” opening to sold-out performances at the Edinburgh Fringe Festival, followed by a twice-extended run at the Apollo Theater in Chicago as well as the Hudson Theater in Los Angeles.

Emily Dorezas (Co-Producer) is co-producer of “Thrones! The Musical Parody” as well as co-producer/writer for “50 Shades! The Musical Parody.” She is executive producer of “Baby Wants Candy” and Spark Creative and served as producer/writer for Second City’s Business Theater. Dorezas has performed stand-up comedy across the U.S. and appeared on Comedy Central’s Tosh.0 and Stand Up Live, and NBC’s Sports Action Team.

Albert Samuels (Co-Producer) is a founding member of “Baby Wants Candy” (with whom he currently performs at Upright Citizens Brigade (LA)), toured with Second City’s National Touring Company, and co-wrote and performed in two critically acclaimed reviews on Second City’s Mainstage. He also serves as the co-producer/writer for both “50 Shades! The Musical Parody” and “Thrones! The Musical Parody.” He co-created and starred in NBC’s Sports Action Team and The Venue, which won best pilot in the Comedy Central Pilot Competition. Samuels starred in the LA preview run of “Shamilton” last spring.

About Baby Wants Candy
“Baby Wants Candy” has performed more than 3,000 completely improvised musicals to thousands of fans from Chicago to New York to Singapore to Scotland. Currently, “Baby Wants Candy” runs in Chicago at the Apollo Theater, in Los Angeles at UCB Sunset and tours internationally.  A cutting edge theatrical experience, the performance features a revolving cast of A-list comedic performers and a full band.

“Baby Wants Candy” begins with the cast asking the audience for a suggestion of a musical that has never been performed before. Accompanied by a full band, the first title that the group hears becomes the title and theme for that evening’s 60-minute show, featuring a roller coaster ride of spontaneously choreographed dance numbers, rhyming verses and witty, jaw-dropping comedy.  Each performance is its own opening and closing night, and by design every show is completely unique and a once–in a lifetime premiere.

“Baby Wants Candy” has received rave reviews in The New York Times, The Huffington Post, The Onion, Chicago Sun-Times, TimeOut New York and more, and has received numerous awards including the winner of FringeNYC’s Outstanding Unique Theatrical Experience, Best Improv Ensemble by Chicago Magazine, the Best Visiting Comedy Ensemble by TimeOut New York, the recipient of the Ensemble of the Year Award at the Chicago Improv Festival, and a rare Sixth Star Award Edinburgh Fringe Festival.


The Apollo Theater, located in the heart of Chicago’s Lincoln Park since 1978, has been home to many of the city’s biggest hits including the recent Million Dollar Quartet, which holds the record for the longest-running Broadway musical in Chicago history. Resident companies of the Apollo Theater include Emerald City Theatre Company and Baby Wants Candy, and many up-and-coming companies can be seen nightly in the theater’s 50-seat downstairs studio. Recently renovated and fully accessible, the Apollo Theater’s intimate 435-seat mainstage continues to deliver world-class theater as one of the city’s premiere off-Loop houses.
Posted by Bonnie Kenaz-Mara at 5:32 PM No comments: