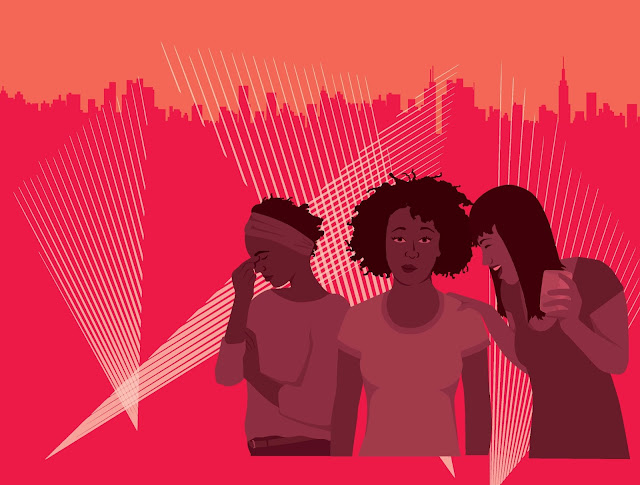 Three friends. One f**ked up night. A whole lot of growing pains.

F**ked up sh*t happens. After an unsavory wake-up call, Octavia decides to put off her troubles and have one last turn up with her friends. In poet Aziza Barnes’s ingenious portrait of a day in the life of four young black women discovering life’s uncomfortable truths in New York City, BLKS explores the joy and anguish of growing up and out. Riotously funny and distinctly rendered, Barnes’s playwriting debut marks the arrival of a truly original contemporary American voice.

“BLKS is a self-portrait of me and my best friends in our cripplingly early 20s. So, a bunch of painful absurdity, that whenever I sit down to edit the latest draft reveals more to me than I can imagine or even am ready for. BLKS for me is emotionally rigorous and delightful because I’m constantly laughing with the person I was and am, and the jokes me and my kin tell each other,” shares Aziza Barnes.

Aziza Barnes is the winner of the 2015 Pamet River Prize for Aziza’s first full length collection i be but i ain’t, from YesYes Books 2016. Barnes is a Cave Canem Fellow and co-host of the popular podcast, The Poetry Gods. Z is a graduate of New York University and participant in the 2016 Ojai Playwrights Conference.

Nataki Garrett was named in American Theatre Magazine’s “One to Watch” and is the Associate Artistic Director of Denver Center for the Performing Arts, a Company Member at Woolly Mammoth and co-Artistic Director of BLANK THE DOG PRODUCTIONS (BTD). Most recently for BTD she directed Carolyn Bryant, which focuses on the decades-long silence of the woman for whom Emmett Till was brutally murdered in Mississippi in 1955. Garrett directed An Octoroon by Branden Jacobs-Jenkins at Woolly Mammoth, which was remounted in July.

Black Card Memberships are for audiences interested in extreme flexibility with six tickets for use any time for any production. Credits valid for one year with the option to add additional tickets as needed. Perks include easy and free exchanges, access to seats before the general public, savings on single ticket prices and bar and restaurant discounts for pre- and post-show socializing.
Red Card memberships are available for theatergoers under 30.

Steppenwolf is located at 1650 N Halsted St near all forms of public transportation and is wheelchair accessible. The parking facility consists of both a covered garage ($12 cash or card) and an open-air lot, located just south of our theater at 1624 N Halsted. Valet parking service ($14 cash) is available directly in front of the main entrance at 1650 N Halsted St starting at 5pm on weeknights, 1pm on weekends and at 12 noon before Wednesday matinees. Street and lot parking are also available. For last minute questions and concerns, patrons can call the Steppenwolf Parking Hotline at (312) 335-1774. Committed to making the Steppenwolf experience accessible to everyone, performances featuring American Sign Language interpretation, open captioning and audio description are offered during the run of each play. Assistive listening devices and large-print programs are available for every performance. With the expertise of Assistive Hearing Systems Ltd., Steppenwolf installed an induction loop on both the main and balcony levels of our Downstairs Theatre in 2015. There is also an induction hearing loop installed in the 1700 Theatre and the Downstairs Theatre.

Steppenwolf Theatre Company is the nation’s premier ensemble theater. Formed by a collective of actors in 1976, the ensemble of 49 members represent a remarkable cross-section of actors, directors and playwrights. Thrilling and powerful productions from Balm in Gilead to August: Osage County—and accolades that include the National Medal of Arts and 12 Tony Awards—have made the theater legendary. Steppenwolf produces hundreds of performances and events annually in its three spaces: the 515-seat Downstairs Theatre, the 299-seat Upstairs Theatre and the 80-seat 1700 Theatre. Artistic programing includes a seven-play season; a two-play Steppenwolf for Young Adults season; Visiting Company engagements; and LookOut, a multi-genre performances series. Education initiatives include the nationally recognized work of Steppenwolf for Young Adults, which engages 15,000 participants annually from Chicago’s diverse communities; the esteemed School at Steppenwolf; and Professional Leadership Programs for arts administration training. While firmly grounded in the Chicago community, nearly 40 original Steppenwolf productions have enjoyed success both nationally and internationally, including Broadway, Off-Broadway, London, Sydney, Galway and Dublin.

Anna D. Shapiro is the Artistic Director and David Schmitz is the Executive Director. Eric Lefkofsky is Chair of Steppenwolf’s Board of Trustees.

Posted by Bonnie Kenaz-Mara at 5:45 PM No comments: