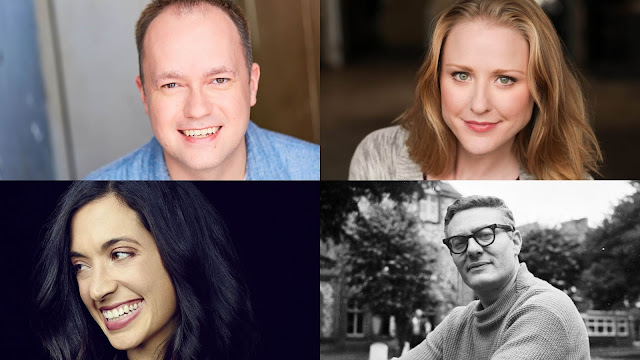 Chicago Premiere!
WHEN WE WERE YOUNG AND UNAFRAID
By Sarah Treem
Directed by Co-Artistic Director Sara Pavlak McGuire

Moving to The Edge Theater in Edgewater


AstonRep Theatre Company, under the artistic leadership of Derek Bertelsen and Sara Pavlak McGuire, is pleased to announce its 2019-20 season, to be presented at its new artistic home, The Edge Theater in Chicago’s Edgewater neighborhood.

AstonRep’s 2019-20 Season kicks off this fall with Peter Shaffer’s psychological thriller EQUUS, directed by Co-Artistic Director Derek Bertelsen. This winter, the season continues with AstonRep’s 11th ANNUAL WRITERS’ SERIES, a daylong festival of workshops from talented local and regional writers. The season concludes next spring with the Chicago premiere of Sarah Treem’s courageous drama WHEN WE WERE YOUNG AND UNAFRAID, directed by Co-Artistic Director Sara Pavlak McGuire.

EQUUS and WHEN WE WERE YOUNG AND UNAFRAID will be staged on The Edge Theater’s mainstage, 5451 N. Broadway St. in Chicago. The 11th annual WRITERS SERIES will be presented in the venue’s studio space, the Edge Off Broadway, 1133 W. Catalpa Ave. Tickets for all productions will go on sale at a later date. For additional information, visit www.astonrep.com.

Inspired by a true story, EQUUS sets out to explore the complex relationships between devotion and myth. When teenager Alan Strang’s pathological fascination leads him to blind six horses in a Hampshire stable, psychiatrist Martin Dysart is tasked with uncovering the motive behind the boy’s violent act. As Dysart delves into Alan’s world of twisted spirituality, passion and sexuality, he begins to question his own sanity and motivations in a world driven by consumerism.

A festival of talented local and regional writers who have an opportunity to workshop near-finished plays and works in development. Over the course of a day, five to seven new works are read by professional actors followed by focused talkback sessions – a time-honored celebration of artistic collaboration.

April 9 – May 10, 2020
WHEN WE WERE YOUNG AND UNAFRAID – Chicago Premiere!
By Sarah Treem
Directed by Co-Artistic Director Sara Pavlak McGuire
Press opening: Saturday, April 11 at 7:30 pm

In the early 1970s, before Roe v. Wade, before the Violence Against Women Act, Agnes has turned her quiet bed and breakfast into one of the few spots where victims of domestic violence can seek refuge. But to Agnes’s dismay, her latest runaway, Mary Anne, is beginning to influence Agnes’s college-bound daughter Penny. As the drums of a feminist revolution grow louder outside of Agnes’s tiny world, Agnes is forced to confront her own presumptions about the women she’s spent her life trying to help.

Sir Peter Shaffer (Playwright, Equus) plays include: Five-Finger Exercise (1960), The Private Ear, The Public Eye (both 1962) and The Royal Hunt of the Sun (1964). In 1965, Shaffer’s adroit farce Black Comedy was performed. Equus (1973; filmed 1977), dealing with a mentally disturbed stable boy's obsession with horses, and Amadeus (1979; filmed 1984), about the rivalry between Mozart and his fellow composer Antonio Salieri, were successes with both critics and the public. Later plays include the biblical epic Yonadab (1985), Lettice and Lovage (1987) and The Gift of the Gorgon (1992). Shaffer was knighted in 2001 and passed away in 2016.

Derek Bertelsen (Director, Equus) joined AstonRep in 2013 and he currently serves as Co-Artistic Director. Previous directing credits with AstonRep include Doubt, Next Fall, Wit, The Lieutenant of Inishmore, The Lyons, the world premiere of The Black Slot, The Laramie Project, and co-directing Eleemosynary with Jeremiah Barr. He produced the sold-out run of Four By Tenn, a festival of one-act plays by Tennessee Williams. He also serves as Artistic Director of The Comrades. Assistant director credits include Goodman and Steppenwolf. Regional credits include Festival 56, Shawnee Summer Playhouse, New Ground Theatre and five seasons at Timber Lake Playhouse.

Sarah Treem’s (Playwright, When We Were Young and Unafraid) A Feminine Ending premiered at Playwrights Horizons and went on to productions at South Coast Repertory and Portland Center Stage, among others. Her play The How and the Why premiered at the McCarter Theater starring Mercedes Ruehl (with Emily Mann directing) and went on to productions at Interact Theatre and Trinity Repertory, among others. Sarah’s other plays include Empty Sky (Bloomington Playwrights Project), Orphan Island (Sundance Theater Lab), Human Voices (New York Stage and Film) and Mirror Mirror. She has been commissioned by Playwrights Horizons, Southcoast Repertory and Manhattan Theater Club, and developed work at the Ojai Playwrights Festival, the Screenwriters Colony, Hedgebrook and Yaddo. In addition to her theater career, Sarah wrote and produced all three seasons of the acclaimed HBO series "In Treatment," for which she won a WGA award and was nominated for a Humanitas award. She was also a writer/producer for the HBO series "How to Make it in America." She has taught playwriting at Yale University, where she earned her B.A. and M.F.A.

Sara Pavlak McGuire (Director, When We Were Young and Unafraid) has been a company member with AstonRep since 2013, where she primarily served as casting director. The 2018-19 season was her first as Co- Artistic Director.  Working primarily as an actor in Chicago, Sara has worked with many different companies around the city; namely Windy City Playhouse, Remy Bumppo, Oak Park Festival Theatre, Filament Theatre, Hubris Productions, Spartan Theatre and of course her home base at AstonRep. She is a two-time Jeff Award nominee (2011, 2018). She received the award in 2011 for her work in Agnes of God, with Hubris Productions. She has assistant directed several productions with AstonRep (Wit, The Lyons, The Laramie Project). Sara holds an MFA in acting from Western Illinois University.