Here at ChiIL Live Shows we've been covering Sketchbook for 3 years now and it's become one of our favorite annual theatre feasts.  The quality and creativity of this mash up of world premier theater pieces is hard to beat.  This year there are EIGHTEEN social issues based pieces on the theme of "incite change". We also dig the concept of setting the fest in a future society looking back and exploring their past (our present). Sounds like wibbly wobbly timey wimey stuff (ala Dr. Who), and right up our alley!

The kick off/press opening is an offering of ALL the pieces, back to back, and it's enough to make your head explode... in the best possible way!!  Come gorge on new theatre.  We did it that way the past 2 years and it was crazy cathartic.  Otherwise... there's a saner approach, where you can buy single show tickets or a festival pass and check the shows out at your leisure. However you roll... we HIGHLY recommend you roll on over to The Flatiron and catch SKETCHBOOK 14: 2049.

Continuing with its new "incite change" mission, Collaboraction presents SKETCHBOOK: 2049, a rapid-fire, raucous festival of 17 world premiere theatre pieces ranging from under a minute to 20 minutes in length, all set in a positive post-apocalypse and reflective of contemporary society's current challenges.
Collaboraction's annual SKETCHBOOK festival is Collaboraction at its best: breaking down the walls that divide theater, music, visual art, video and the internet. Selected from hundreds of submissions, SKETCHBOOK once again brings together the collective talents of more than 150 pioneering and established directors, designers, actors, musicians and artists from Chicago and around the country for two jaw-dropping programs packed with creativity, experimentation and celebration.

This year, SKETCHBOOK transports audiences to the year 2049, a post-apocalyptic world of regeneration and birth where 17 shows from the past have been unearthed to reveal how we lived before the Revolution. Chicago-based playwright Ike Holter (Hit the Wall, Loom and B-Side Studio) is Guest Curator of SKETCHBOOK: 2049, which features new works by Caitlin Parrish, The New Colony, Usman Ally, Seth Bockley and Holter himself in a collaboration with director Dexter Bullard.

In addition to two programs of fresh new work, Collaboration's air-conditioned Lounge in the Pentagon Theatre will be a live connection zone for audiences to relax, socialize, discuss, debate and enjoy post-show "pop up" performances on Saturday evenings.
SKETCHBOOK: 2049 runs May 22 - June 15, 2014 at Collaboraction, located in the historic Flat Iron Arts Building, 1579 N. Milwaukee Ave., Room 300, in Wicker Park. The pieces are split into Program A: Reflection and Program B: Echo and run in rep with both programs performed each Saturday.

"Each year SKETCHBOOK brings together more than 150 actors, visual artists, musicians, writers, directors, designers, and stagehands from all over the city to collaborate on this beautiful and ambitious undertaking. Many return year after year, drawn by the energy and passion that drives this festival forward," said Anthony Moseley, Founding Executive and Artistic Director of Collaboraction and SKETCHBOOK Festival Director. "SKETCHBOOK serves as an invaluable opportunity for both seasoned and emerging artists to connect and grow together, turning Collaboraction into a hub of talented individuals working toward the common goal of creating a broad array of innovative art for a diverse audience."

The Surprise
by Corey Rieger, directed by Nathan Green  The tables get unexpectedly turned on a group of people gathered to throw a surprise birthday party for a friend.

The Distance to the Moon
devised by First Floor, directed by Jesse Roth  Puppet theater, live action and multimedia elements combine in this story of a young sailor stranded on the moon alongside the woman he loves.

Let Me Tell You What I See Here
by Jason Gray Platt, directed by Anna Bahow  Real YouTube comments are deconstructed and repurposed to show personal connections in a disconnected world.

To the NSA Agents Listening in on this Play
by Sam Graber, directed by Mary O'Connor  An important message to our burgeoning national security state from one lone voice in the wilderness.

Asshole
by Lisa Kenner Grissom, directed by Jo Cattell  When some 'infernal ass pains' force Lena to retreat into the solace of her bathtub, she learns a thing or two about suffering in silence.

Young Fathers
by Joel Kim Booster, directed by Chris Chmelik  A single father and his gay neighbor are each on the verge of a complete breakdown as they wrestle with the meaning of fatherhood in the wake of personal tragedy.

The Big One
by Idris Goodwin, directed by Marie Cisco  Vernon is always waiting for his home team to score the big one, but his wife and son aren't so keen on waiting. A subtle story about chasing the past at the expense of missing out on the present.

Dream Scenario
devised by Ike Holter, directed by Dexter Bullard  A victim of an insanely elaborate stalking plans a face-to-face meeting with their pursuer.

Sanatorium Story
by Seth Bockley, directed by Lydia Milman Schmidt  A child deals with his terrible illness and macabre surroundings through the comedic character Boob McNutt.


A medical breakthrough spawns a pill, which nullifies the need for sleep. But what happens when the well-to-do can reclaim a third of their life while the rest are left to sleep through it?

Until the World is Beautiful
by Jack Miggins, directed by Elana Boulos  While wandering the labyrinthine tunnels of a post-apocalyptic world, a man comes across a 2000-year-old pregnant woman longing to return to the surface.

Boys and Violence
by Mackenzie Yeager, directed by John Williams  This parodic send-up of masculinity and morality features Andy and Ben, two young 'boys,' as they come together to play a harmless game of 'Violence.'

Based on a True Story
by Usman Ally, directed by Sonny Das  When two friends stop over to catch a high school game at Ismail's apartment, things turn heated when their schools' mascots are shown to trade in vicious racial stereotypes. Nationalism and race collide in this satirical look at America's cultural heritage.

The Rise and Fall of Everything in the World
by Brooke Allen, directed by Diana Raselis  What exactly is the value of a universe fashioned by two bored and aimless clown-like beings? And what would be its value if it could simply disappear?

10 Things
by Scott Tobin, directed by Emmi Hilger  At each sequential ten-year marker of his life, a man takes stock of all that he's gained, all that he's lost, and all that he continues to be grateful for. 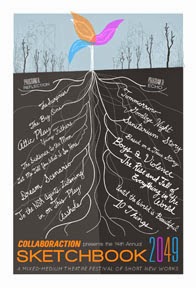 Collaboraction (collaboraction.org) celebrates its 18th year as a Chicago-based arts organization and has recently moved its theater and operation headquarters to the historic Flat Iron Arts Building, 1579 N. Milwaukee Ave., in the heart of Wicker Park. By incorporating innovative artists and interdisciplinary collaboration, Collaboraction creates groundbreaking theatrical and art-based experiences.

The overwhelming response to Crime Scene: A Chicago Anthology in 2013 was the first step in Artistic Director Anthony Moseley's new vision for Collaboraction to be used as an artistic tool to explore critical social issues in an effort to create dialogue and incite change. To do so, Collaboraction collaborates with artists, community leaders, health professionals and citizens from throughout the city to create original theatrical experiences that push artistic boundaries and explore critical social issues with a diverse community of Chicagoans.

More recently, Collaboration's world premiere This is Not a Cure for Cancer was an immersive live theater experience that used the same provocative, docudrama style conceived via Crime Scene to attack cancer, its treatment and the way we live.


Collaboraction has worked with more than 2,500 artists to bring more than 60 productions and events to more than 50,000 audience members. Production highlights also include 2010's Chicago premiere of 1001 by Jason Grote, 2008's world premiere of Jon by George Saunders and directed by Seth Bockley, and 2007's critically acclaimed production of The Intelligent Design of Jenny Chow: an instant message with excitable music by Rolin Jones.
Posted by Bonnie Kenaz-Mara at 10:52 AM No comments: