LAST CALL: MERCY KILLERS and SIDE EFFECTS at Greenhouse Theater Center Through 10/8

Check out Two Timely "Pay What You Want" one-act plays steeped in America’s controversial relationship with healthcare. Written and performed by Michael Milligan.

THE AMERICAN MERCY TOUR:
MERCY KILLERS & SIDE EFFECTS
Written and Performed by Michael Milligan
Directed by Tom Oppenheim
Through October 8, 2017 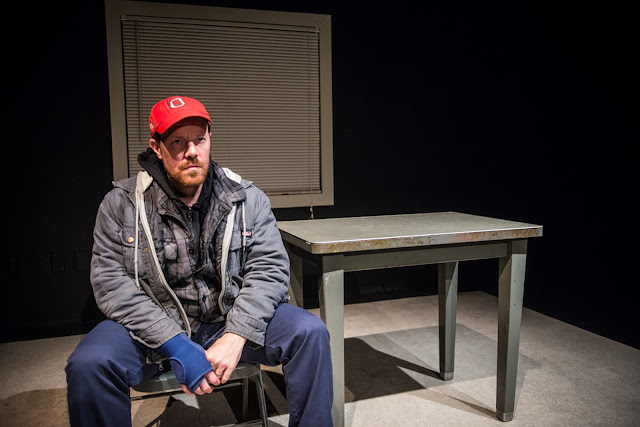 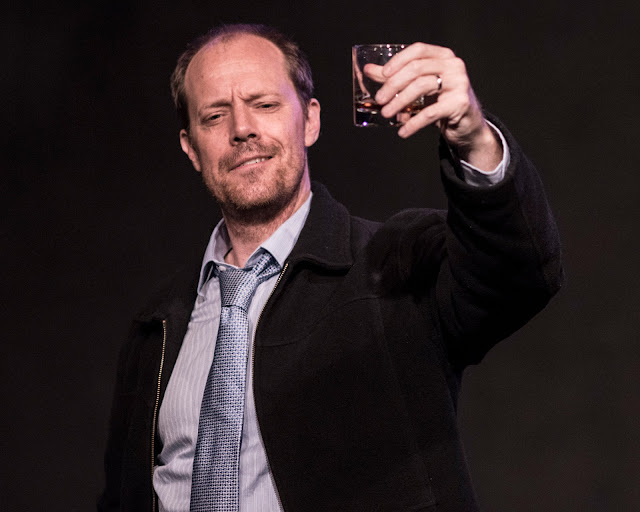 Side Effects-1 (pictured) Actor and playwright Michael Milligan in SIDE EFFECTS. Photo by Teresa Castracane.


Greenhouse Theater Center and Poor Box Theater, in association with D.C’s award winning Taffety Punk Theatre Company, are pleased to present THE AMERICAN MERCY TOUR: MERCY KILLERS and SIDE EFFECTS, two one-act plays steeped in America’s controversial relationship with healthcare. Written and performed by Michael Milligan and directed by Tom Oppenheim, these moving and unapologetic pieces will be presented as a single theatrical event, immersing the audience in the stories of patients and physicians, coming out of the waiting room and into the fray.

MERCY KILLERS and SIDE EFFECTS will play September 7 – October 8, 2017 at The Greenhouse Theater Center (Upstairs Studio), 2257 N. Lincoln Ave. in Chicago. Tickets (pay-what-you-want) are currently available at greenhousetheater.org, in person at the box office or by calling (773) 404-7336.

In MERCY KILLERS, Joe, a blue-collar red state auto mechanic faced with his wife’s failing health, must grapple with the stark divide between his values and his reality. Pushed to the breaking point by debt, disease and a busted system, Joe must decide what compromises he will make to keep his wife alive. MERCY KILLERS is all at once a tender love story and an unblinking look at those the system leaves behind.

Flipping to the other side of the stethoscope, SIDE EFFECTS follows William, a family practice physician on the brink of burnout. Caught between his ambition to become the healer his father once exemplified and the corporatization of his chosen profession, William must reconcile the art and business of medicine, or be forced to lose his practice. In this Chicago premiere, we see the human side of those who heal us, throwing light onto the turmoil that remain out of sight from the examination table.

“Michael Milligan is one of those rare theatre artists who can combine his craft, intellect and activism in a perfect storm of unapologetically political performance,” comments Greenhouse Theater Center Artistic Director Jacob Harvey. “These pieces and the issues they explore are increasingly important in our political moment, but what truly sets them apart is their unwillingness to simplify. Milligan’s pieces are bi-partisan and in their splendid, terrifying honesty put faces to the statistics and figures we so easily grow numb to.”

History of “The American Mercy Tour”
“I wrote Mercy Killers in response to a number of personal encounters with the healthcare system,” comments Michael Milligan. “A good friend of mine showed up at the Folger Theatre stage door after a show, carrying a small duffle bag, in which he had all of his belongings. He’d been living on the streets for a couple years. I invited him back to my place, where I discovered he also had a number of medical problems, a slipped disk in his neck from a fall and a golf ball size lump on his arm. I took it on myself to try to get him in to see someone. The difficulty of that blew my mind. It was overwhelming. If I lived in any number of other nations, I could have made an appointment and walked my friend to a doctor’s office, and the first question would not have been ‘what insurance do you have.’”

“The situation for many healthcare workers is also desperate.” Milligan says, “there’s even diagnostic terminology now for it, it’s called ‘moral distress.’ It’s crippling doctors and nurses; many of them are burning out and leaving the profession. The medical literature says that ‘moral distress occurs when one knows the ethically correct action to take but feels powerless to take that action.’ The healthcare system becomes more bureaucratized and corporatized every year, medical decisions are increasingly influenced by claims analysts, hospital administrators, and entitlement bureaucrats, Side Effects is a meditation on the conflicts of interest that arise as a result.”

The impulse to create Side Effects was similarly visceral. When Milligan was on the road performing Mercy Killers, he started interviewing doctors and nurses in each community. Side Effects has already been well received by the medical community, including a special presentation by the Mayo Clinic.

"Michael Milligan has captured the sum total of pressures that confront today's physicians in Side Effects. A realistic, engaging and very dramatic portrayal of the life of an average doctor trying to meet the demands of a busy practice as he nearly succumbs to a breakdown and considers leaving the profession he loves so much. Anyone involved in medicine, from the caregivers to the patients we serve, would benefit from seeing this performance." –Robert E McAfee MD, Former President, American Medical Association.

About the Artists
Michael Milligan (Playwright/Actor) Broadway: August: Osage County, La Bete, Jerusalem. Off Broadway: Thom Pain, Mercy Killers. The Golem. Chicago: Iago in Othello and Tug of War: Civil Strife at the Chicago Shakespeare Theater. Mercy Killers at American Theater Company. Michael will appear in the Goodman’s upcoming world premiere, Blind Date. Michael has performed Shakespeare hither and yon with groups like the Royal Shakespeare Company, The Shakespeare Theater in DC. Alabama, Utah, Colorado, New Jersey, Milwaukee, and Illinois Shakespeare festivals, Shakespeare Santa Cruz, and Shakespeare and Company. Regionally, Michael has played at the Guthrie, Westport Playhouse, The McCarter Theater, St. Louis Rep, Cincinatti Playhouse and more. Michael received the 2013 Fringe First award in Edinburgh for Mercy Killers which he has performed 100s of times around the country. Michael’s other plays include Phaeton, Heroin, Urgent: Aliens, The Sea Wolf, and a musical adaptation of Aesop’s Fables commissioned by Circle in the Square in NYC. Television credits include: Law and Order, Person of Interest, The Knick, Chicago Justice, and APB.  Michael is a graduate of the Juilliard Drama Division where he received the John Houseman Prize. When not acting and writing, Michael is director of PR and Marketing for his brother’s knife company, New West Knifeworks and is also the founding artistic person of the Poor Box Theater. Michael lives in Chicago.

Tom Oppenheim (Director) Directorial credits include Michael Milligan’s Mercy Killers, which won the prestigious Fringe First Award at the 2013 Edinburgh Festival Fringe; A Bright Room Called Day off-Broadway, As You Like It by William Shakespeare (with Steve Cook), Songs and Statues by Peter Nickowitz (world premiere), Our Town by Thornton Wilder, What Shall I Give My Children? by Don K. Williams (world premiere), Imagining Heschel by Colin Greer (all for the Harold Clurman Laboratory Theater Company). As artistic director and president of the Stella Adler Studio of Acting for over 15 years, Tom has articulated a mission, engaged top faculty, structured a world-class training program and created a cultural center. He originated the Harold Clurman Laboratory Theater Company in 2002 which has since presented over twenty production including 11 world premieres. He created MAD (the Harold Clurman Center for New works in Movement and Dance Theater) a dance theater company that has resented over 30 new works, the majority of which were commissioned world premieres, and which includes Marie Gillis, Bill T. Jones and Mikhail Baryshnikov on the advisory board. He spearheaded the creation of the Harold Clurman Art Series which has presented artists including Harold Bloom, Edward Albee, John Ashbery, Julianne More and Harold Mabern in events that are free and open to the public.  Under Oppenheim’s leadership, the Stella Adler Outreach Division, a program originally designed to educate urban youth, was created.  Since 2004, the division has provided free theater training to over 5,000 low income New York City citizens.  In addition, the Stella Adler Studio of Acting trains over 500 actors per year. Oppenheim studied acting at the National Shakespeare Conservatory and with his grandmother, Stella Adler. Acting credits include the title role in Shakespeare’s “Macbeth” as well as Michael in Buzz McLaughlin’s “Sister Calling My Name”, both with the Harold Clurman Theater Company. Tom co-edited The Muses Go To School (New Press 2012) and his writing is featured in Arthur Bartow’s Training of the American Actor (TCG, 2006).

About the Companies
The Greenhouse Theater Center is a producing theater company, performance venue and theatre bookstore located at 2257 N. Lincoln Ave. in Chicago’s Lincoln Park neighborhood. Our mission is first and foremost to grow local theatre.

The Greenhouse Theater began its producing life in 2014 with the smash hit Churchhill, after which came 2016’s much-lauded Solo Celebration!, an 8 month, 16 event series highlighting the breadth and depth of the solo play form. This year, the Greenhouse announced a full subscription season, with a mix of multi-character and solo plays. With a focus on our community, the Greenhouse is also launching the Trellis playwriting residency, an initiative designed to cultivate the next generation of Chicago theatre creators and a two-tiered education program for college and high school students.

With new ideas always incubating, the Greenhouse is flourishing. Come grow with us!

Taffety Punk Theatre Company’s mission is to establish a dynamic ensemble of actors, dancers and musicians who ignite a public passion for theatre by making the classical and the contemporary exciting, meaningful, and affordable. The company was recently nominated for Helen Hayes Awards in choreography for 2016’s productions of Phaeton and An Iliad. Past awards include the John Aniello Award for Outstanding Emerging Theatre Company at the 2008 Helen Hayes Awards. The company was also a 2010 finalist for the D.C. Mayor's Arts Award for Innovation in the Arts.

The Poor Box Theater
An actor, an audience, and an empty space.
Keeping overhead low, we reach high.
Through simplicity, we delve into complexities.
Limiting spectacle, we expand imagination.
A light in dark corners reveals hidden treasures.
One vulnerable heart redeems the whole world.
The greatest revolution is empathy.

The Poor Box Theater brings “pop up” performances to theaters, arts centers, church basements, libraries, union halls, medical schools, conferences and living rooms around the country. The Poor Box Theater is committed to bringing challenging, quality theater to out of the way parts of America — Mercy Killers has toured West Virginia, Oregon, Texas, Maryland, Tennessee, Pennsylvania, New York, Ohio, Illinois, Minnesota, California and more. From the Mayo Clinic, to bilingual performances with the Living Hope Wheelchair Association in Texas, from the floor of the House of Representatives in St. Paul, to a 16-city tour with the California Nurses Association, the Poor Box Theater sparks needed dialogue about the issues of the day.

Posted by Bonnie Kenaz-Mara at 4:38 PM No comments: