REVIEW: The Hypocrites' Trifecta of Gilbert & Sullivan Shows Are a Riotous Round of Hilarity Through 2/7/15 #Review #‎ChiILPicksList

It was our great pleasure to catch all 3 of The Hypocrites' Gilbert and Sullivan musicals this past month and we highly recommend you hightail it over to The Den Theatre ASAP and see them. We loved The Mikado last year and couldn't wait to see it again and add H.M.S. Pinafore and Pirates of Penzance to the mix. These shows are great for theatre freaks, kids and adults of all ages, and the reluctant theatre goer as well. They have a small bar right in the performance space and a free range audience that's welcome to move about at will and sit, stand or lounge around the whole performance space or the traditional chairs. Click here and scroll down for loads of our past Hypocrites coverage. 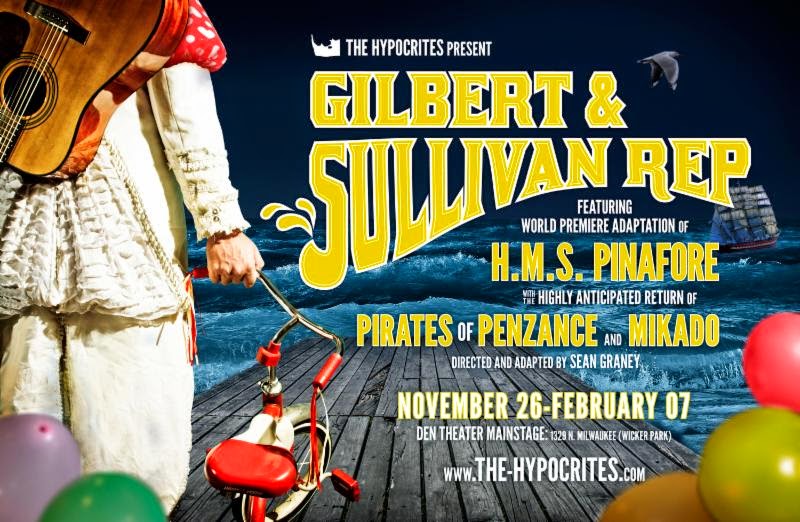 The whole vibe begins more like a party than a play, with people with drinks in hand milling about and chatting up strangers, kids playing on the multilevel set pieces, and musicians everywhere. At all 3 shows we saw, there in the fray was director, Sean Graney, grinning ear to ear. And he had every right to beam like the Cheshire Cat. The Hypocrites are on to something magical and spectacular! 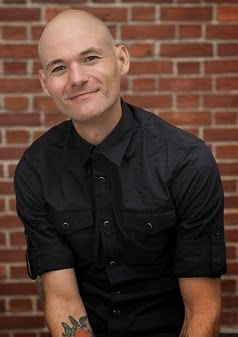 I think Sean has the right idea. I kinda want to join him and spend the whole winter in The Hypocrites world of playful fun and light! 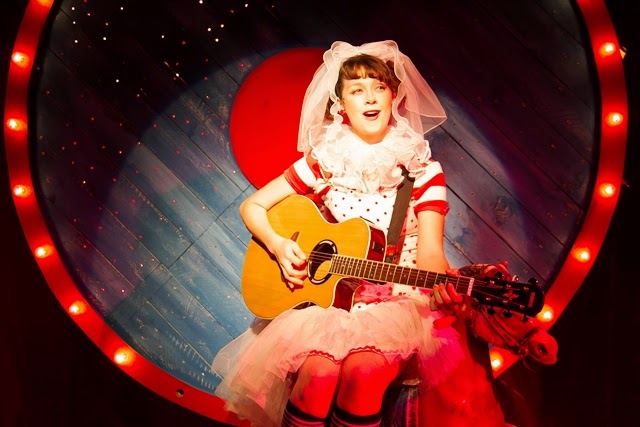 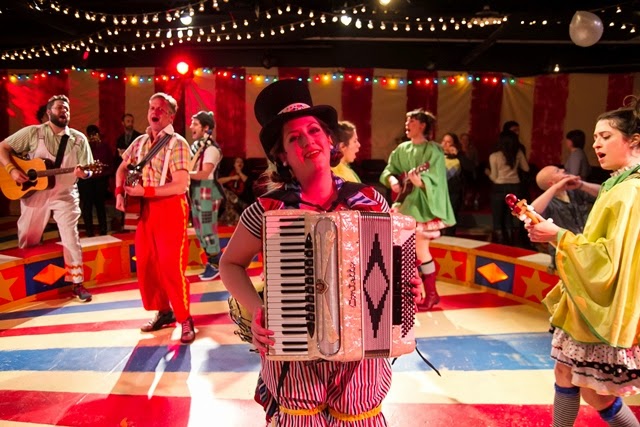 Here at ChiIL Live Shows/ChiIL Mama we can't think of a better way to spend the darkest, coldest days of the year than under the twinkling circus tent lights with The Hypocrites. Their trifecta of Gilbert & Sullivan musicals is a joyful celebration of light, color, music and ridiculous rhyme. We've never seen any troupe make better use of the promenade style. They don't just break down the 4th wall, they run rings around it! 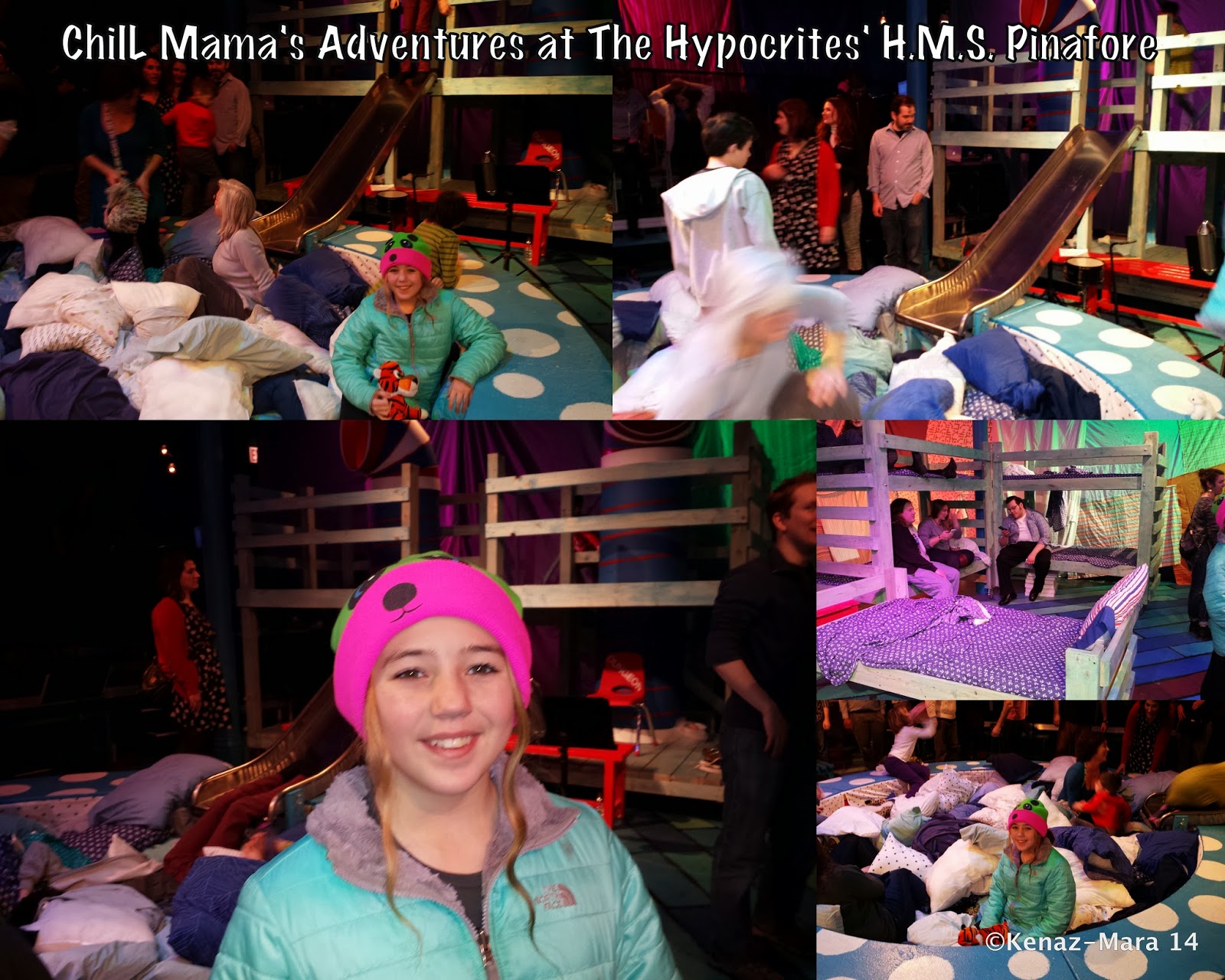 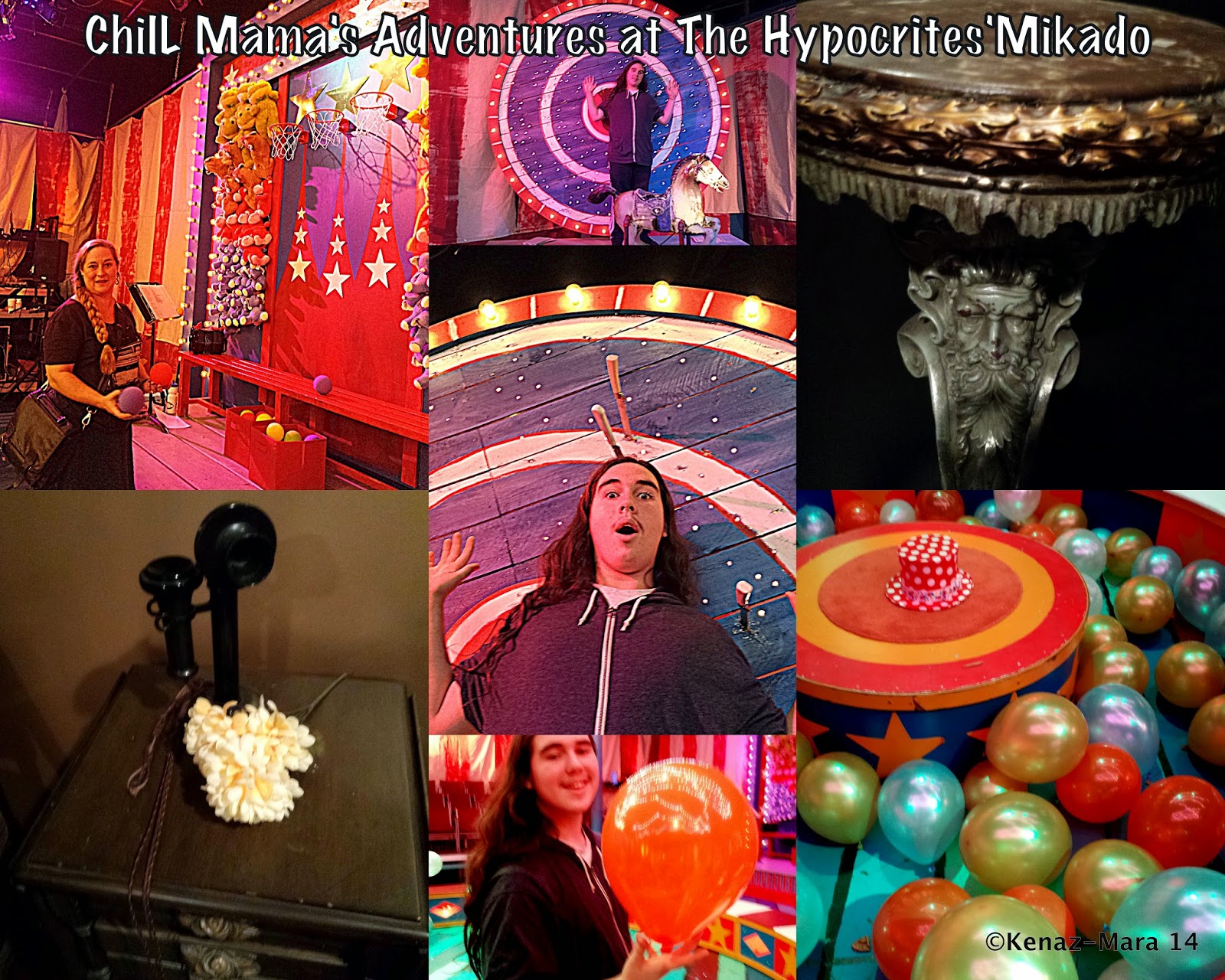 The Mikado is still our pick of the litter, but we dug all 3 and suggest you get a package deal and do it up right. I mean, come on, where else can you find a talented tribe of rag tag minstrels to serenade you in a pillow pile at the foot of a slide where you can snuggle a passel of stuffed animal cats, or on bunk beds, or in a rubber duckie filled kiddy pool sans water for cripes sake! I dare you not to grin. Perfect for a date night or fam friendly fun. 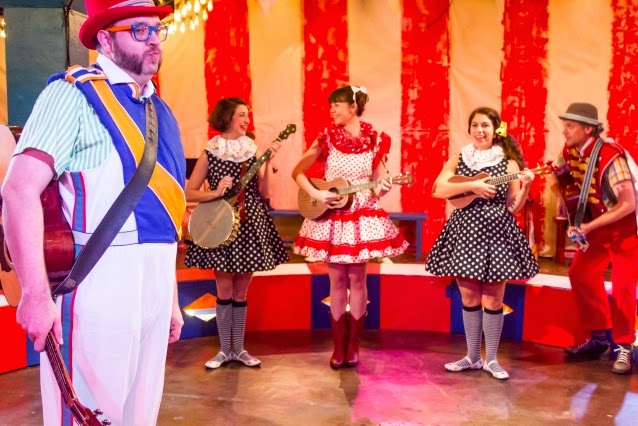 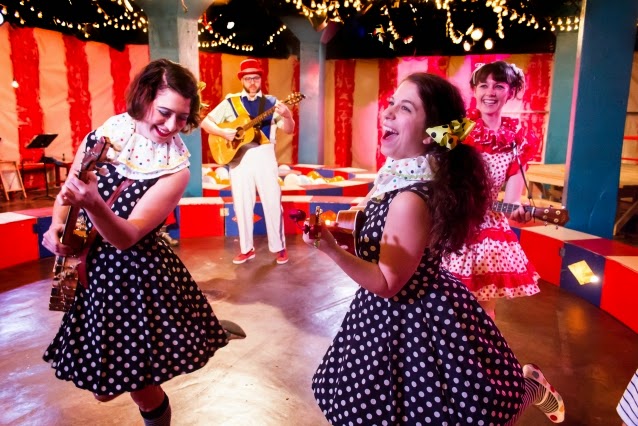 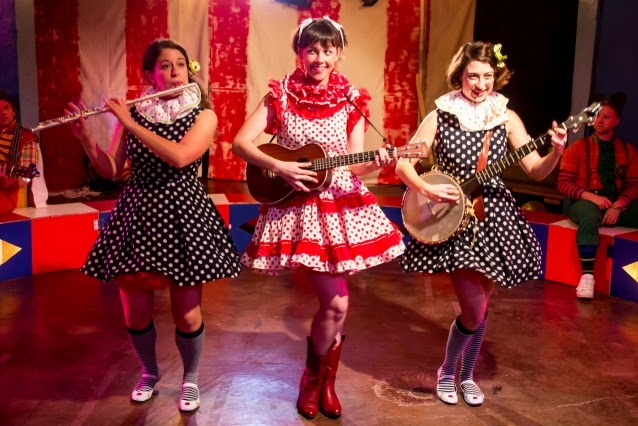 The Hypocrites' unique take on new and traditional works is something to see! Highly recommended.


Do you want to come back to the show again? Do you want to see the other two in rep? Do you want to encourage others to do so and get a $6 discount per ticket? We created the code "comeback" for you to enter at checkout in order to do just that. 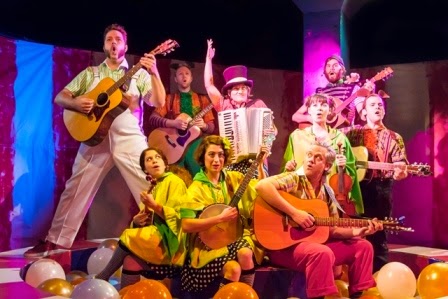 The Hypocrites is proud to announce the return production of Gilbert and Sullivan’s The Mikado adapted and directed by Founding Artistic Director Sean Graney. The Mikado will be remounted at the Steppenwolf Garage (1624 N Halsted St) this coming winter.

Here at ChiIL Live Shows we dig Sean Graney's vision and have long enjoyed and respected his direction.   With Graney and Halena Kays at the helm, they've steered The Hypocrites right, and this troupe has become a top favorite of ours... and of the Jeff committee too. 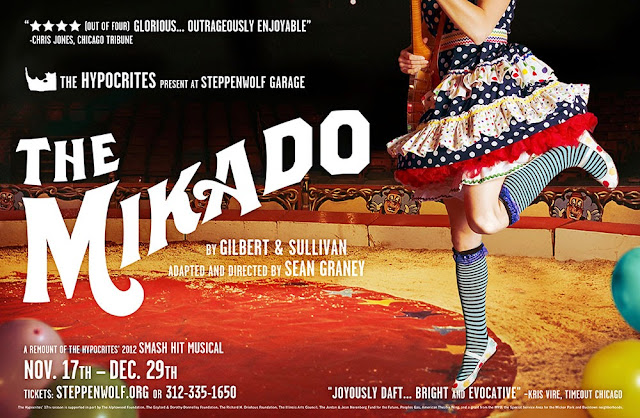 The Mikado will open on November 17, 2013 at 4pm. Previews will take place on November 14, 15 & 16 at 8pm. There are 40 performances scheduled with evening performances at 8pm and matinees at 4pm. The Mikado will close on December 29, 2013. Ticket prices are $36 and can be purchased by visiting steppenwolf.org or by calling 312-335-1650. Running 80 minutes with no intermission, The Mikado is appropriate for audiences of all ages.

It is that time of year again for the return of The Hypocrites’ critically acclaimed Gilbert and Sullivan canon. After performing Pirates of Penzance for enthusiastic audiences both at the American Repertory Theatre (A.R.T.) in Boston the past two summers and at the Chopin Theatre for three years straight, The Hypocrites are excited to bring back Mikado, a beloved re-imagining of Gilbert & Sullivan’s famous operetta this winter. In January 2014, Pirates of Penzance will go on to perform at Actors Theatre of Louisville, home of the Humana Festival.

The Mikado features a talented cast of ten who act as their own orchestra. This production will feature unfathomable amounts of operetta hits and is intended to provide a summer-like secular experience for fun-loving Yule time ticket buyers.

Sean Graney has directed over 30 productions for The Hypocrites since 1997. He was a participant in the NEA/TCG Career Development Program for Directors. He has won three Joseph Jefferson Citation awards for the Direction of Sophocles: Seven Sicknesses, Equus and Machinal. He has directed Edward II (Chicago Shakespeare), The Hairy Ape (Eugene O’Neill Festival at Goodman Theatre), The Comedy of Errors, The Mystery of Irma Vep and What the Butler Saw (Court Theatre),Yankee Tavern (Milwaukee Rep), The Elephant Man (Steppenwolf for Young Audiences) and is currently on fellowship at Radcliffe Institute for Advanced Study at Harvard University
The creative team also includes Scenic Designer Michael Smallwood*, Properties Designer Maria DeFabo*, Lighting Designer Heather Gilbert, Choreographer Katie Spelman, Costume Designer Alison Siple* and Music Director Andra Velis Simon.

Founding Artistic Director Sean Graney* created The Hypocrites in 1997 and is currently run by Artistic Director Halena Kays* and Managing Director Megan Wildebour*. The Hypocrites are recognized as groundbreakers that defy the audience’s expectations. The company has grown significantly in the past few years, receiving acclaim for productions at Steppenwolf Garage (ThreePenny Opera and 4:48 Psychosis), Goodman Theatre, Museum of Contemporary Art, DCA Storefront and Chopin Theater. The company’s smash-hit production of Our Town, directed by David Cromer, transferred in 2009 to Off-Broadway, Los Angeles and Boston.

Pirates of Penzance has appeared at American Repertory Theatre twice and will enjoy another run at Actors Theatre of Louisville in 2014. American Theatre Wing, best known as the creator of the Tony Awards, presented The Hypocrites with one of the 2013 National Theatre Company awards this year. Upcoming shows in the 17th season include The Tennessee Williams Project at Chopin Theatre and Into the Woods, a co-production at Mercury Theater Chicago.

The Steppenwolf Garage is dedicated to new plays, emerging artists and millennial audiences for the American theater. It offers artists the opportunity to present their work with the scale, space and resources it merits. For audiences, it provides opportunities to engage in multigenerational conversation about the new, provocative work emerging from Chicago’s diverse and vibrant theater scene.

The Hypocrites’ 17th season is supported in part by American Theater Wing, The Alphawood Foundation, The Gaylord & Dorothy Donnelley Foundation, The Richard H. Driehaus Foundation, The Illinois Arts Council, The Jordan & Jean Nerenberg Fund for the Future, Peoples Gas and a grant from the WPB, the Special Service Area for the Wicker Park and Bucktown neighborhoods.