OPENING: Einstein’s Gift at the Athenaeum Theatre, Studio One

A Rare Chicago Theatre event and one of the most eagerly anticipated productions of the summer.  Meet the cast of
“Einstein’s Gift”
Chicago premiere from Genesis Theatrical Productions

Einstein's Gift begs the question, if you could return to a time and change everything, what would it be? 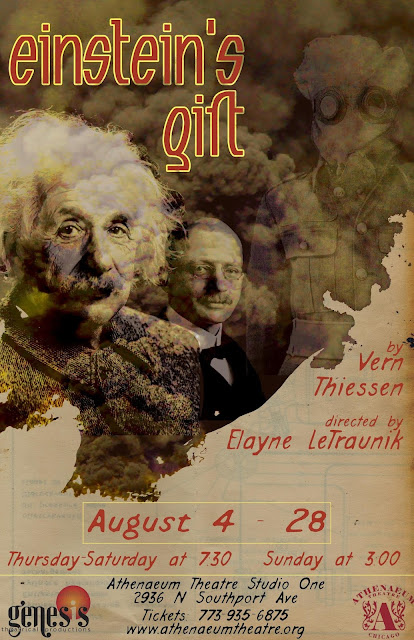 Here at ChiIL Mama and ChiIL Live Shows we're all about supporting and promoting women in the arts, so we're particularly excited about the works Genesis Theatrical Productions is bringing to fruition. We're particularly looking forward to their next offering, Einstein’s Gift. This award winning play from Vern Thiessen is running August 4-28 at the Athenaeum Theatre, Studio One.

Based on a true story, German scientist Fritz Haber is renouncing his faith, fearing persecution from an increasingly oppressive and militaristic government. In this award winning play, Haber's friend, Albert Einstein, fears Haber's work has taken a dangerous turn. While Einstein sees science as a discipline which transcends national boundaries as a force for good, Haber's work has become a deadly tool of the state. Einstein makes a desperate and emotional appeal that will resonate for generations and define the course of history. With daunting forces arrayed against him, Einstein is prepared to risk everything; his life, his work and his reputation against a building storm threatening to engulf the world in war.

Performances are August 4-28 at the Athenaeum Theatre, Studio One, 2936 N. Southport, in Chicago’s Lakeview neighborhood.  Performance days and times are Thursday, Friday and Saturday at 7:30pm and Sunday at 3pm.  Tickets are $30 with discounts for students, seniors and groups of 10 or more.  Discounted tickets are also available on Goldstar and Hot Tix.  For tickets call 773-935-6875 or go to www.athenaeumtheatre.org.

Chicago Director and Producer Elayne LeTraunik
Elayne LeTraunik and Genesis brings to life a story that resonates in today’s headlines “I did a staged reading of this play more than 10 years ago,” says Elayne LeTraunik, “and I have been wanting to do a full production ever since.  I think the issues it examines including the perverted use of science by government, the horror of war and the danger of ultra-nationalism are issues that are still prevalent today.”

Elayne is a native Chicagoan, involved in the Chicago Theatre scene since the 1970s.  A graduate of the University of Illinois at Chicago, she received a B.A. Degree with honors in History and Theatre.  She continued her acting studied at the Webber Douglas Academy of Dramatic Art (now part of the Central School of Drama) in London, England. Elayne has worked extensively both as an actress and a producer/director and starred in the Chicago premieres of “Nuts” and “Extremities.”  She also appeared in “Beyond Therapy” which featured Skipp Sudduth and Carmen Roman. Elayne is a member of Actors’ Equity, Chicago Women in Philanthropy and the League of Professional Theatre Women

As a producer, she has overseen a number of award winning and critically acclaimed productions including the Chicago premiere of “A Dybbuk” directed by Curt Columbus and a revival of “Class Enemy” directed by Steve Scott.  She has produced and/or directed such productions as “Today I am a Fountain Pen,” “The Stroop Report,” “From Generation to Generation,” and “Tunnel Rat.”  The Genesis production of “The Last Cyclist” received 4 stars from Chicago Theatre Beat.  Elayne directed “On Holy Ground” in 2014 and in 2015, directed “Creation’s Birthday,” “Jihad,” “Zelda at the Oasis,” and co-directed with Patrick Murphy “Hope Throws Her Heart Away.”  Three of the aforementioned plays were written by women.

Helping Women in the Arts
Genesis Theatrical Productions has worked since 2006 to empower and educate through dynamic and unique theatrical works with exclusive Chicago, Midwest or World premieres, placing a multicultural focus on playwrights, and emphasizing social justice and community responsibility.

In addition, Genesis promotes the place of women in theater at all levels. It’s program, Athena’s Wisdom, emphasizes their efforts and talents, and works to inspire other women to achieve their artistic goals.  Genesis develops, creates and produces.  We feed the mind. In 2014, Genesis received a 50/50 award from the International Centre for Women Playwrights in recognition of its work in promoting the work of women playwrights.


Vern Thiessen’s plays have entertained audiences across Canada, the US, Asia, UK, and Europe, including Einstein’s Gift, Blowfish, Lenin’s Embalmers, Bird Brain, Vimy, Shakespeare’s Will, Apple and Of Human Bondage. He has had four plays produced off-Broadway. Thiessen is the recipient of the Sterling and Dora Awards for Outstanding New Play, The City of Edmonton Arts Achievement Award, the University of Alberta Alumni Award for Excellence, The Carol Bolt Award, the Alberta Playwriting Competition, the Canadian Jewish Playwriting Competition, and the Governor General’s Literary Award. He is Past President of both the Playwrights Guild of Canada and the Writers Guild of Alberta. He is currently at work on commissions from Epic Theatre Ensemble, Ensemble Studio Theatre, Concrete Theatre/L’Uni Theatre, and Touchstone Theatre/Patrick Street Productions. In 2014, Vern was appointed as Artistic Director of Workshop West Playwrights’ Theatre.
Posted by Bonnie Kenaz-Mara at 11:57 AM No comments: