Posted by Bonnie Kenaz-Mara at 6:29 PM No comments:

ChiIL Live Shows caught up with front man, Tommy Victor and drummer, Alexei Rodriguez, before their 4/20 set at Cobra Lounge, Chicago, for an exclusive video interview.   We talked about everything from their new album, to that crazy chaos that's parenting and touring as a musician.   Tommy and Alexei both have daughters on either end of the age spectrum-about to graduate from high school and 20 months old.   They had some insights for our continuing series on How Creatives Parent and How Parents  Create.   Check it out here.

Prong is back with a vengeance.  Their 8th studio album, Carved Into Stone is just released and their recent 4/20 Chi-Town show at Cobra Lounge sold out!  Here at ChiIL Live Shows, we've been giving Carved Into Stone a listen repeatedly, and can't get enough.   Hopefully Tommy's serious when he says they're writing new material and want to put out back to back albums, and ride the momentum of this sonic boom, Carved in Stone, instead of slipping back into oblivion, and releasing another album in 5 years.    This album, the first all new material in 5 years, indeed, is an amalgam of the best of Prong's past and fresh new fury.

These 11 tracks of rage will bring joy to metal fans world wide.  There's not a weak link in the bunch, but Revenge_Served Cold will warm hearts.   This album comes out swinging with Eternal Heat, and doesn't ease up.   Ammunition, State of Rebellion, and List of Grievances (likely our favorite) provide plenty of rebellion ragers.   We also really dig Keep on Living in Pain and Eternal Heat.  Even the slower title track, Path of Least Resistance and Reinvestigate which close out the album, are strong and full of sweet riffs.  Carved into Stone is a metal must have.

On 4/20, we caught a little of En Masse and Witchburn's whole set and were super impressed with Witchburn in particular.   We'll have live show shots from both bands up in the very near future.  We'd seen some past Witchburn clips online that were interesting enough, but they just don't do their live show justice.   Check 'em out when you can! 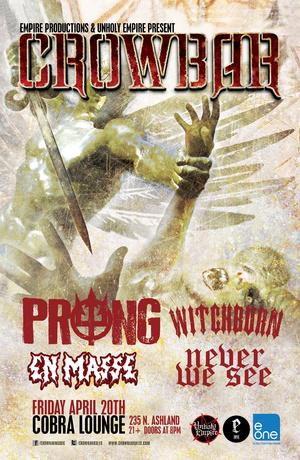 During Prong, the pit was so frenetic and outta control they had to send in the bouncers and toss a few bodies out of the club.   I got smashed into the side of the stage a half dozen times and eventually had to duck behind the merch table fast.  I spent a few days limping, but my camera gear all survived.   Despite the near brawl, it was a welcome reunion and the band sounded great!   They've still got that legendary power to stir things up.

Tommy Victor began as a sound guy for CBGBs, and formed the first incarnation of the band with bassist Mike Kirkland who was CBGB’s doorman.   In the past 20+ years, Prong has been through many incarnations and weathered the death of their bass player, ex-Killing Joke bassist Paul Raven, at age 46.   They've been on tour with many of the big boys like
Sepultura, Pantera, Soulfly and Fear Factory, among others.   Tommy took a hiatus from Prong around 2000 and played with Danzig and Ministry.   He'll be back out again in May with Danzig Legacy.   Check Prong's site for dates/cities.

They were signed by Epic in 89 and unceremoniously dropped in 96 after the album Rude Awakening turned eerily prophetic, and proved a rude awakening for the band, indeed, when it didn't sell as well as anticipated.   In our interview, Tommy conceded that for a while after that he wanted nothing to do with Prong, but eventually ran out of money and decided to give it another go.   We hate to sound all schadenfreude (happy about the misfortunes of others), but the metal world was not finished with Prong, and we welcome you back with bursting ear drums and head banging mosh pits.    Your cash flow problems = our gain.   And failure, struggle and loss make for great material. 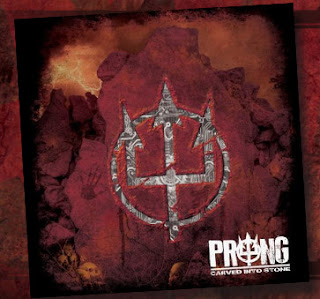 With fresh material in mind, Prong tapped producer, Steve Evetts (Dillinger Escape Plan, Suicide
Silence), who worked them relentlessly to make Carved Into Stone as good as it gets.   Tommy and Alexei spoke humorously, heatedly, and at length about the whole brutal recording process.  As so often happens, we had our best conversations off camera, once the lens wasn't pointed at the band.   Suffice it to say, all the hard work paid off and they're pleased with the final result.

Evetts was a great fit for polishing up Carved Into Stone, so all the raw power, energy and emotion come through, combined with technical prowess.    They may have hated the tedious retakes, but with high production values and a perfectionist streak, plus a healthy ear toward not overproducing, Evetts earned his excellent reputation and did right by the band.

Here's Prong's take on Carved Into Stone off their home site:

What becomes an iconoclast the most? Carved Into Stone sums up what
Prong stands for. This is an album slaked in hostility, personal
detachment and seething with the urban paranoia that's long been the
mark of this sonic triad. It's eleven tracks that don't merely settle
into the New York City-born band's cannon of material that has yielded
post-metal classics including Beg To Differ and Cleansing. It exceeds
it.

"I hate nostalgia," says mainstay, vocalist and guitarist Tommy Victor
whose musical and personal outlook belies his current Los Angeles
environs. "But this record literally has every strand of Prong's DNA
spliced together in a way that feels more exciting than it has in some
time."

Tommy Victor admits that Carved Into Stone is the first time Prong has
taken direction from a producer in the studio. "It's also the hardest
I've ever worked on a record," he says of working with Evetts. "I'm
happier with the way it came out more than almost anything I've ever
done but there were points during it I wanted to kill myself and
everyone around me."

Prong emerged from the New York City underground of the late 80's,
quickly setting themselves apart from the conformist culture of the
city's hardcore and metal scenes. They were recognized internationally
for their first two independent releases: Primitive Origins and Force
Fed. When Prong's dalliance with the outer limits of the mainstream
acceptance came via Epic Records, it proved more successful than the
underground-bred trio ever expected. The band's "Snap Your Fingers Snap
Your Neck" from Cleansing became Prong's calling card.

"It felt like the world had finally caught up with us," says Tommy.
Prong's influence was being felt in the scene around them. Bands from
the likes of Pantera to White Zombie to Korn were taking notice of
Prong's purposeful, creative riffing and making that the template for
platinum selling success. "I wasn't jealous," Tommy recalls. "But I
could take a royalty check or two."

At the beginning of the 2000's, Tommy put Prong aside for a time to
play with Danzig and Ministry. It was a much-needed time for Victor to
refocus his energies. When Prong finally twisted itself back into form,
they toured exhaustively both headlining and supporting the likes of
Soulfly and Fear Factory. Slowly but surely, the songs and ideas that
would become Carved Into Stone began to take form. "The songs I was
writing felt more like Prong than anything I had written since Raven was
in the band," says Tommy, recalling the era when the recently deceased
ex-Killing Joke bassist Paul Raven was one of his co-conspirators.

Prong's Long Branch Records/SPV debut Carved Into Stone isn't merely
another chapter in the band's many-storied career or the much clichéd
"return to form". It's the sound of Tommy Victor and Company stating
exactly who Prong is. Like it or not, they aren't about to go away any
time soon. 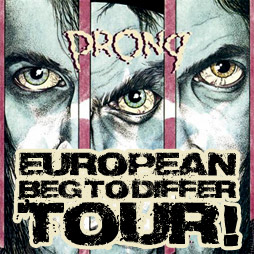 Like Tommy said in our interview, they're busy gorging on Beg To Differ on those long stretches in the van, so they'll be ready to bust it out in May for their European Tour.