The Most Spectacularly Lamentable Trial of

I'll be out for the press opening, September 11th, so check back soon after for my full review.

The recently widowed “Mother of America” lies alone in her Mount Vernon bed, ravaged by illness and attended to by the enslaved people who will be free the moment she dies. This uproarious form-shifting fever dream takes us deep into the ramifications of one of America's original sins. Dizzying and fantastical, this Chicago premiere from Pulitzer winner James Ijames boldly remixes this country's dark history with a delicate balance of truth and humor.

Single tickets for The Most Spectacularly Lamentable Trial of Miz Martha Washington starting at $20 are now on sale at steppenwolf.org and the Box Office at 312-335-1650.

Steppenwolf 2022-23 Memberships are also on sale, including Classic Memberships offering 6-play packages securing dates and seats, and flexible Black Card Memberships with six tickets for use any time for any production. Also available are Red Card Memberships for theatergoers under 30.

The Most Spectacularly Lamentable Trial of Miz Martha Washington

James Ijames (Playwright) is a playwright, director and educator who received the 2022 Pulitzer Prize in Drama for his play Fat Ham. He has appeared regionally in productions at The Arden Theatre Company, The Philadelphia Theatre Company, The Wilma Theatre, Baltimore Center Stage, Mauckingbird Theatre Company and People’s Light and Theatre. James’ plays have been produced by Flashpoint Theater Company, Orbiter 3, Theatre Horizon, Wilma Theatre, The National Black Theatre, Steppenwolf Theatre, Definition Theatre and Shotgun Players, and have received development with PlayPenn New Play Conference, The Lark, Playwright's Horizon, Clubbed Thumb, Villanova Theater, Wilma Theater, Azuka Theatre and Victory Gardens. James is the 2011 F. Otto Haas Award for an Emerging Artist recipient, and he has two Barrymore Awards for Outstanding Supporting Actor in a Play for Superior Donuts and Angels in America and two Barrymore Awards for Outstanding Direction of a Play for The Brothers Size (Simpatico Theatre Company) and Gem of the Ocean (Arden Theatre). James is a 2015 Pew Fellow for Playwriting, the 2015 winner of the Terrance McNally New Play Award for WHITE, the 2015 Kesselring Honorable Mention Prize winner for ...Miz Martha, a 2017 recipient of the Whiting Award, a 2019 Kesselring Prize for Kill Move Paradise and a 2020 Steinberg Prize. James was a founding member of Orbiter 3, Philadelphia’s first playwright producing collective. He received a B.A. in Drama from Morehouse College in Atlanta and a M.F.A. in Acting from Temple University in Philadelphia. James is an Associate Professor of Theatre at Villanova University and a co-artistic of the Wilma Theater.

Whitney White (Director) is an Obie Award and Lilly Award winning director, actor and musician based in Brooklyn, New York. She is the current recipient of the Susan Stroman Directing award, an Artistic Associate at the Roundabout and a part of the Rolex Mentor and Protégé Arts Initiative. Her original musical Definition was part of the 2019 Sundance Theatre Lab 2016 ANT Fest, and her five-part musical exploration of Shakespeare’s Women and ambition; Reach for It is currently under commission with the American Repertory Theater in Boston. She has developed work with: The New York Times, Ars Nova, The Drama League, Roundabout, New York Theatre Workshop, 59E59, The Lark, The Movement, Jack, Bard College, NYU Tisch, Juilliard, Princeton, SUNY Purchase, South Oxford, Luna Stage and more. Whitney is a believer in collaborative processes and new forms. Her musical discipline is rooted in indie-soul and rock. She is passionate about black stories, reconstructing classics, stories for and about women, genre-defying multimedia work and film. Past fellowships include: New York Theatre Workshop 2050 Fellowship, Ars Nova’s Makers Lab, Colt Coeur and the Drama League. MFA Acting: Brown University/Trinity Rep. BA Political Science, Certificate in Musical Theatre: Northwestern University.

Steppenwolf Theatre Company’s trailblazing new 50,000 square foot theater building and education center, the Liz and Eric Lefkofsky Arts and Education Center, was designed by world-renowned architect Gordon Gill FAIA of Adrian Smith + Gordon Gill Architecture, with construction by Norcon. The centerpiece of the new Arts and Education Center is the new 400-seat in-the-round Ensemble Theater in Honor of Helen Zell—one of its kind in Chicago—with theater design and acoustics by Charcoalblue.

As the Chicago theatre community continues to navigate the COVID-19 pandemic, Steppenwolf Theatre remains committed to the safety of its patrons and staff. For the most up-to-date information on our venue’s COVID precautions, please visit steppenwolf.org/welcomeback.

Steppenwolf offers accessible services to ensure all audience members have access to our work, including American Sign Language interpretation (available for student matinees as scheduled with education staff or per public performances below), Spanish Language captions, wheelchair accessible seating and more. With questions, email access@steppenwolf.org.

Steppenwolf Theatre Company is a Chicago theater that is home to America’s ensemble. The company began performing in the mid-1970s in the basement of a Highland Park, IL church—today Steppenwolf is the nation’s premier ensemble theater with 49 members who are among the top actors, playwrights and directors in the field. Deeply rooted in its ensemble ethos, the company is committed to equity, diversity, inclusion and making the Steppenwolf experience accessible to all. Groundbreaking productions from Balm in Gilead and August: Osage County to Downstate and Pass Over—and accolades that include the National Medal of Arts and 12 Tony® Awards—have made the theatre legendary. Artistic programming includes a main stage season; a Steppenwolf for Young Adults season; LookOut, a multi-genre performance series; and the Steppenwolf NOW virtual stage. The nationally recognized work of Steppenwolf Education engages more than 20,000 participants annually in Chicagoland communities promoting compassion, encouraging curiosity and inspiring action. While firmly grounded in the Chicago community, more than 40 original Steppenwolf productions have enjoyed success nationally and internationally, including Broadway, Off-Broadway, London, Sydney, Galway and Dublin. 2021 marks the opening of Steppenwolf’s landmark Liz and Eric Lefkofsky Arts & Education Center—deepening the company’s commitment to Chicagoland teens and serving as a cultural nexus for Chicago. Glenn Davis and Audrey Francis are the Artistic Directors and E. Brooke Flanagan is Executive Director. Keating Crown is Chair of Steppenwolf’s Board of Trustees.

Steppenwolf’s Mission: Steppenwolf strives to create thrilling, courageous and provocative art in a thoughtful and inclusive environment. We succeed when we disrupt your routine with experiences that spark curiosity, empathy and joy. We invite you to join our ensemble as we navigate, together, our complex world. steppenwolf.org, facebook.com/steppenwolftheatre, twitter.com/steppenwolfthtr and instagram.com/steppenwolfthtr. 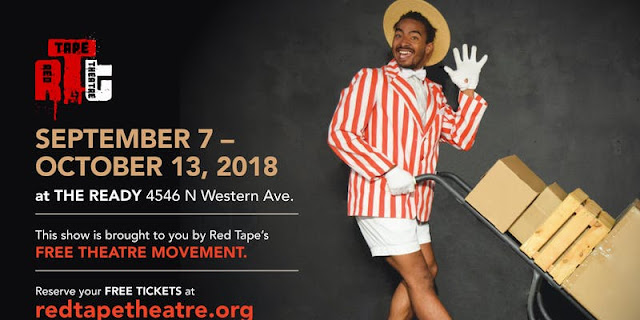 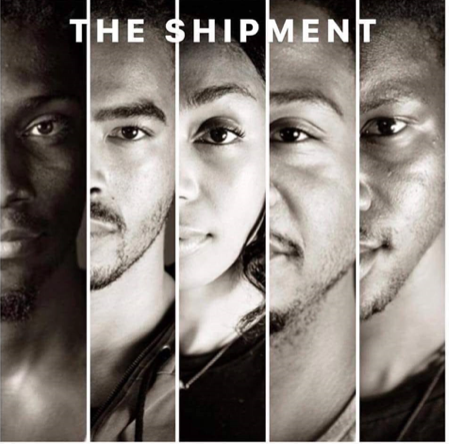 Admission: FREE ADMISSION thanks to our donors to the FREE THEATRE MOVEMENT

Where: THE READY, 4546 N Western Ave
For Information/Reservations: Reserve free tickets via: www.redtapetheatre.org.

What: In THE SHIPMENT, Young Jean Lee uses her razor-sharp and unsettling humor to upend the surface stereotypes and tropes of African Americans that permeate our media, entertainment industry, and the dominant culture (aka white perceived) narrative. Audiences are confronted with clichés, distortions, and brilliant sleights of hand that force us to go beyond the lampoon and shift the lens through which we perceive race in order to confront our own bias.

Sydney Charles (ASSOCIATE DIRECTOR) is an award-winning actress that hails from Chicago, IL. Selected theatre credits include: Father Comes Home From the Wars(Goodman Theatre), Guess Who's Coming to Dinner(Court Theatre), Lottery Day (Goodman Theatre - New Stages), The Fly Honey Show, Spamilton Chicago (Royal George Theatre), An Octoroon(Definition Theatre Company), Dorothy in The Wiz at (Kokandy Productions), Zora in the world premiere of Prowess (Jackalope Theatre), and the title role in Dessa Rose (Bailiwick Chicago). Her directing debut was with Wildclaw Theatre with their yearly Deathscribe Festival of Horror Plays. Sydney can also be seen in episodes of The Haven web series, The T web series, and has appeared on Showtime's Shameless. She is also an artistic associate with Firebrand Theater--the newly formed feminist musical theater company. Sydney thanks God for every opportunity she is given and her circle for supporting her every step of the way. Represented by Stewart Talent.

Young Jean Lee (PLAYWRITE) is a Korean-American playwright, director, and filmmaker. She is the Artistic Director of Young Jean Lee's Theater Company, a not-for-profit theater company dedicated to producing her work. She has written and directed ten shows for Young Jean Lee's Theater Company and toured her work to over thirty cities around the world. Lee was called "the most adventurous downtown playwright of her generation" by Charles Isherwood in The New York Times and "one of the best experimental playwrights in America" by David Cote in Time Out New York. With the 2018 production of Straight White Men at the Hayes Theater, Lee became the first Asian American woman to have a play produced on Broadway.

Sheldon Brown (ENSEMBLE) is a 2014  graduate of Acting at Emerson College in Boston. His recent credits include Time Is On Our Side (understudy performed) at About Face Theatre, 1980 or Why I Voted for John Anderson at Jackalope Theatre, A Wonder In My Soul at Victory Gardens (understudy performed). Man In The Ring at Court Theatre, Feral with MPAACT Theatre Company and more. He also has numerous credits in Boston including The Grand Inquisitor directed by Peter Brook, and The Shakespearean Jazz Show, a collaborative new work that turns Shakespeare into New Orleans street jazz at the New York Musical Festival.

Hunter Bryant (ENSEMBLE) is a New Jersey native  actor/ writer and graduate of The Theatre School at DePaul. Recent Chicago credits include The Aristophanesathon (Hypocrites), Dontrell Who Kissed the Sea (First Floor Theatre) and Our Town (Redtwist Theatre.) Be on the lookout for his upcoming films How Is This The World (directed by Sadie Rogers) and First Dance (directed by Megan Artes.) Follow his work on instagram: @Behunting

Eric Gerard (ENSEMBLE) is honored to be working on this show, with such a talented team. Other Chicago credits include: TO CATCH A FISH (Timeline Theatre); AKEELAH AND THE BEE (Adventure Stage Chicago); KING LIZ (Windy City Playhouse); OCTAGON (Jackalope theatre); MY MANANA COMES (Teatro Vista); ANNAKARENINA (Lifeline Theatre); THE ROYALE (American Theatre Co.) Eric is an Instructor, and proud graduate of THE ACADEMY, at BlackBox Acting. He is represented by Hayes Talent.

Kiayla Ryann (ENSEMBLE) makes her debut at Red Tape Theatre with The Shipment. Chicago credits include: Lexi, Hookman (Steep Theatre), Miriamne, Winterset (Griffin Theatre) and Trisha, Five Women Wearing the Same Dress (Loop Players) as well as understudying The Crucible at Steppenwolf. Kiayla received her BA from Bradley University and is a School at Steppenwolf 2016 Album. She is grateful to God for her amazing supportive family, friend, and team. Represented by Stewart Talent. 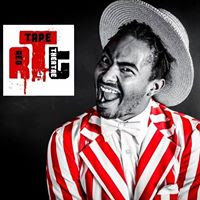 “The public interest is best served by the free exchange of ideas.” – John Kane

Red Tape believes that access to the arts is essential for our community’s ability to engage in a free exchange of ideas. As an art form, the immediacy of theatre provides a powerful platform for this exchange. We strive to remove the barriers that exist between our community and an increasingly commodified culture. Starting in January of 2018, we will offer all of our quality theatrical productions to the public free of charge. 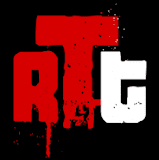 Red Tape will be able to offer our work free of charge thanks to the generous support of our Members, each of whom make an automated monthly donation in an amount of their choose (or a onetime donation). Each donation enables Red Tape to share our work with more people and to engage a growing community in discourse through the arts.

Posted by Bonnie Kenaz-Mara at 2:55 PM No comments: